The GRAAL studio, founded by architects Carlo Grispello and Nadine Lebeau, has given new life to the refectory/restaurant of the Crous University campus in Cergy-Pontoise, in France. The architects restructured and expanded an existing building, located in the heart of the Cergy prefecture park, transforming it into an important place for university life and for the campus' services. A construction that fits harmoniously into the local context, becoming an important component of the park and enhancing the landscape qualities of the site. 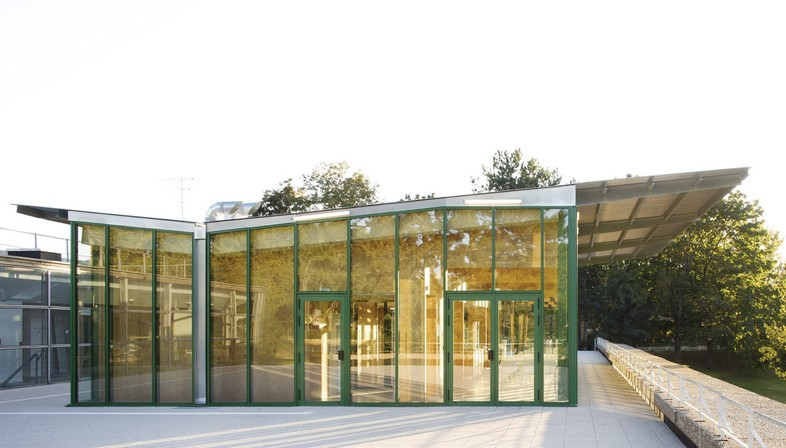 With the restructuring and expansion of the refectory/restaurant of the Crous university campus in Cergy-Pontoise, in France, the GRAAL architecture studio has given new life to a pre-existing building built in 1993 inside the large François Mitterrand Park.
The building occupies an area of the park located at the intersection of the two main routes that connect the Paris-Seine University sector and the Val d'Oise prefecture. While the pre-existing structure already enjoyed a privileged position within the park's quality landscape context and public interest, nevertheless, as the architects highlighted, the building suffered from lack of visibility and interior spaces not used to their fullest potential due to the limited relationship with the outside. The restructuring project created by the GRAAL studio thus focused on allowing the refectory to regain an important role for university life and for the campus' services. The new building becomes a strong component of the park, fitting harmoniously into its context and enhancing the landscape qualities of the site.
First and foremost, the architects chose to highlight the intrinsic qualities of the original building. Of the refectory's pre-existing 2000-square-metre building, the architects recovered all the elements considered to be of quality from an architectural point of view. Not only the prefabricated concrete structure, but also the flexible construction system, offering a wealth of features such as paths, stairways and openings. In addition, the restaurant's offer was completed with a new expansion called the "kiosk".

The new refectory is spread over two floors, directly accessible from the park on the same level thanks to the topography of the land. Part of the lower level is thus underground and reserved for the kitchen work spaces. The dining room, instead, is located on the opposite side. Thanks to the modifications made by the GRAAL studio, this space can now benefit from a stronger relationship with the outside and more light penetrating from the large glazed façade. In addition to enlarging the existing openings, the architects also removed a retaining wall and remodelled the sloping outdoor garden. Moreover, they deliberately preserved the material quality of this volume to use it as a mineral "base" on which the new lighter body of the factory has been grafted. The glazed façade and the garden enhance the restructured refectory, now more apparent in the park's context and inviting passers-by to enter. The interior has been organised in three phases: a relaxation area, the dining space and the kitchen space. Despite the low ceilings, a predominant palette of light colours, a careful choice of materials and the architectural solutions adopted offer a large and comfortable space. The upper floor houses the new extension, the so-called "kiosk". On the restaurant volume, the architects have designed a transparent pavilion with a large terrace that opens up towards the park and the surrounding nature. The kiosk is architecturally cohesive with the restaurant, with its glazed façade governed by green support elements that respect the alignments with the underlying structure. The pavilion thus functionally completes the refectory's services, offering new possibilities for interaction with the surrounding green context and allowing the structure to become more visible on the urban scale, becoming a new landmark for the park. 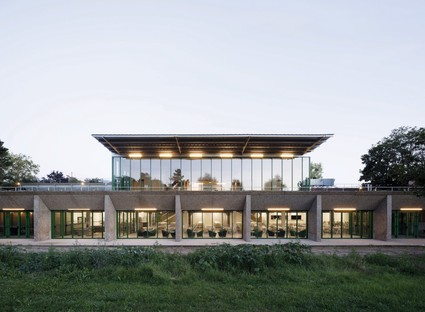 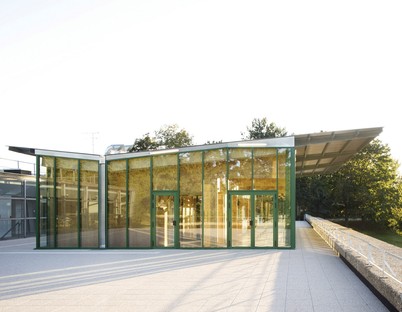 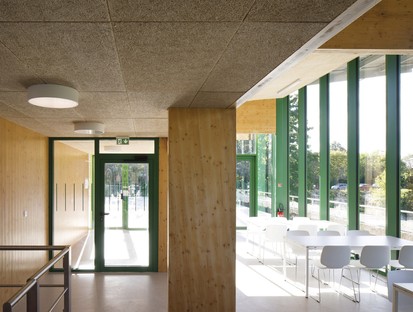 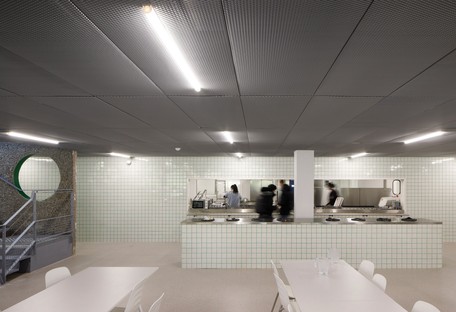 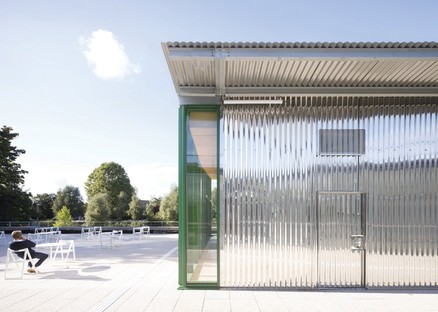 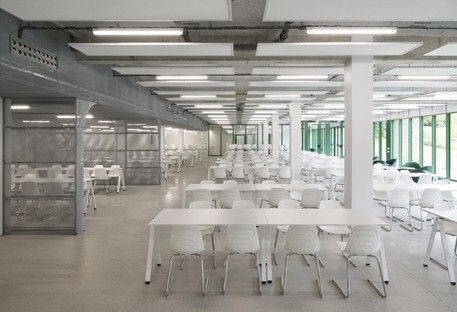 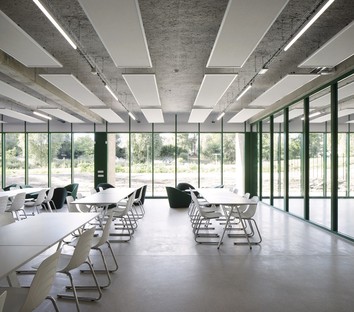 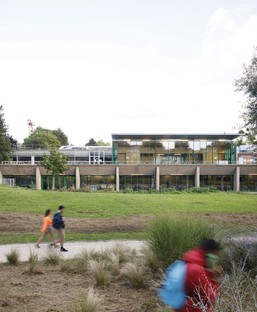 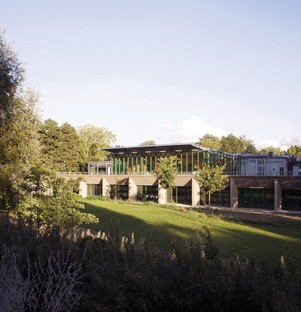 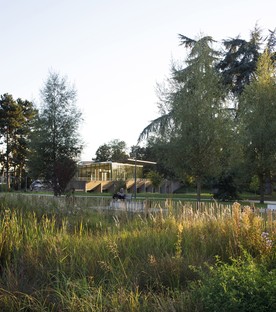 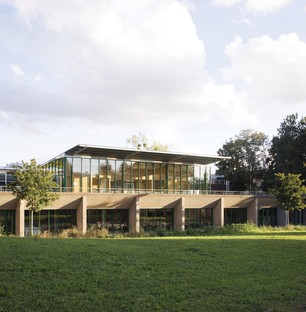 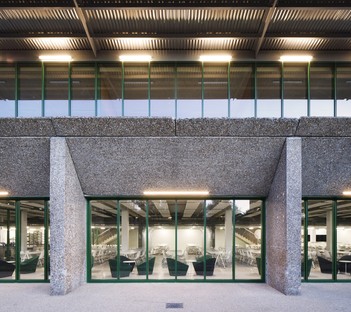 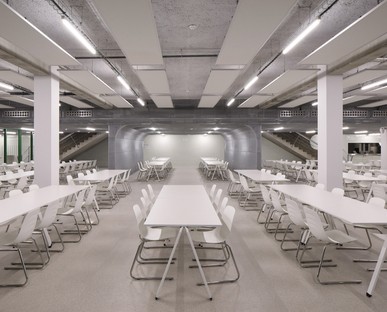 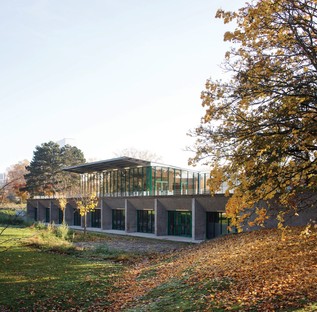 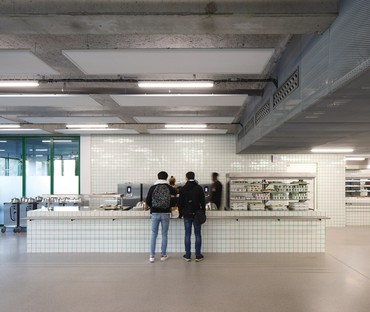 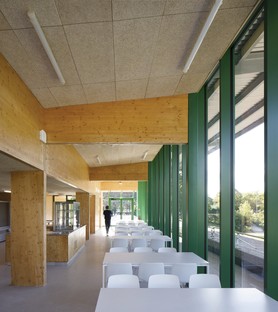