Giuseppe Tortato Architects: an exciting new story for a penthouse in Padua

In the historical centre of Padua, just a stone’s throw from the Church of the Eremitani and the Scrovegni Chapel, architect Giuseppe Tortato has completed the interior design of a penthouse at the top of an 18th-century building. A project that has once again imbued the apartment with a sense of excitement, freeing it from the superfluous additions resulting from a hurried renovation in the 1980s, emphasising the natural charm of the existing wooden structures and creating a new and intriguing ‘story’ that ties together all the rooms. 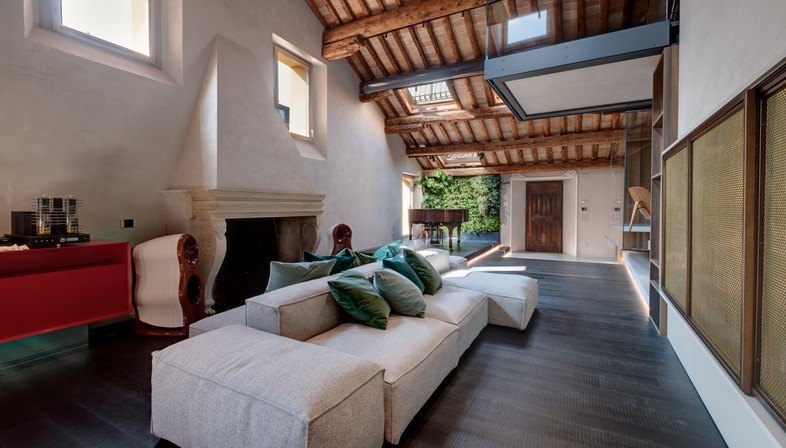 Building and conveying “emotions” with architecture, designing “a home that embraces all those who live and stay in it, surprising and exciting them”: this was the goal of the interior design project by Paduan firm Giuseppe Tortato Architetti. Architect Giuseppe Tortato has entirely overhauled the penthouse of an 18th-century building, located in the historical centre of the city in Veneto, just a stone’s throw from the Church of the Eremitani and the Scrovegni Chapel. The penthouse had previously undergone a somewhat hasty renovation in the 1980s, and as such, when the architect and his team came to inspect the premises, the situation was critical. The location was a “vertical” penthouse spread across three floors, each with rooms and spaces conceived at different times. A confused and disjointed space, there seemed to be a distinct lack of any sort of overall vision to it, and the rooms were incapable of conveying emotions despite having the potential to be interesting. 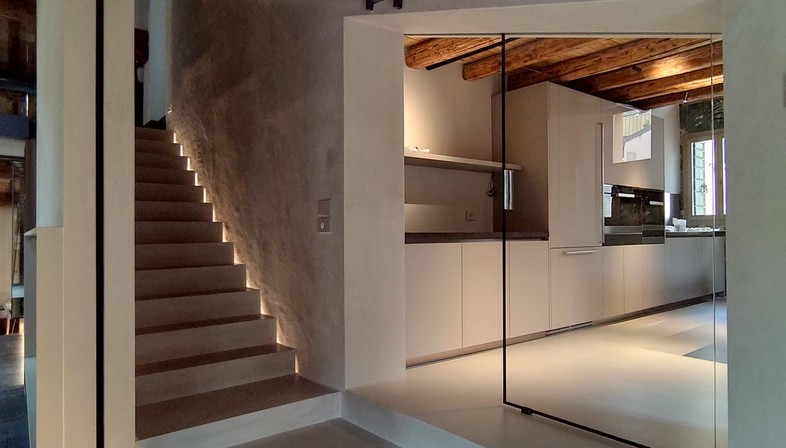 As such, the architect Giuseppe Tortato started with a thorough “cleaning” of the space, removing all the superfluous additions and emphasising the natural charm of the existing wooden structures. An operation aimed at bringing the light back into the rooms and creating a sense of order, thus laying a crucial foundation for building a new ‘story’ for the space. The fundamental idea was to create a “retreat” home, a domestic and comfortable space where the client and their family could devote themselves to their own individual interests and leisure activities whilst still remaining together. At the same time, it was to be a dynamic space with special rooms and places for hosting guests and friends. An idea that the architect, Giuseppe Tortato, brought to life by using double-height spaces and height differences, inserting new volumes made of glass and greenery into the penthouse as a way of breaking up the classic patterns of the rooms. Volumes and suspended platforms amplify the penthouse’s original double-height spaces and height differences, all elements and actors in the new story being written by the architect for the house and which, like every home, starts from the entrance and reaches its climax in the spacious lounge.
This room is the beating heart of the entire design: dominated by natural colours and materials, it serves as the central square of the house from which other rooms and special spaces can be accessed. Beside the entrance, for example, a large green wall serves as the backdrop to the piano, whose presence is highlighted by its position on a raised platform, the greenery around it, and the natural light flooding in from the window and the skylights on the ceiling. On the opposite side, the study overlooks the living room thanks to the “glass case” encapsulating it. The platforms mark out the edges of the rooms and create a certain dynamism, but fall short of separating them physically; as such, a new platform emphasises the corner of the fireplace. Majestically taking centre stage is a large sofa which, on one side, allows you to enjoy the warmth of the original fireplace, and on the other, looks towards its modern counterpart: the monolith containing the TV and other technological devices. Finally, a large platform contains the dining area, separated from the kitchen by a glass wall.
The bedroom area is in the upper loft, accessible via a hidden staircase visible in the dining area. The staircase also provides access to the “teatime terrace”, a small relaxation area perfect for reading and listening to music which consists of a projecting glass balcony that protrudes into the double-height space of the lounge. 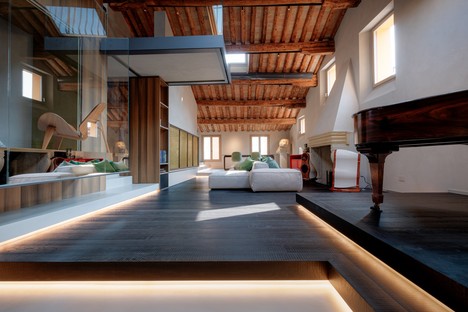 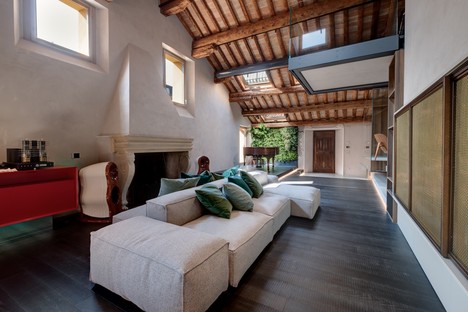 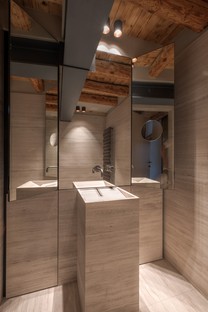 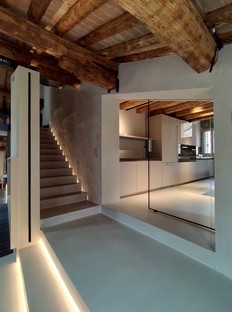 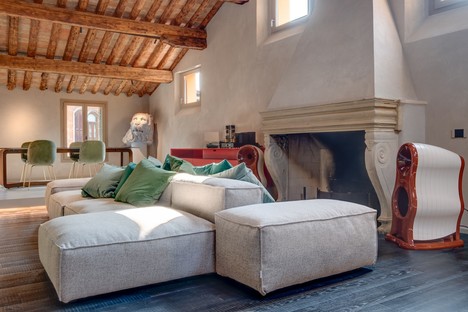 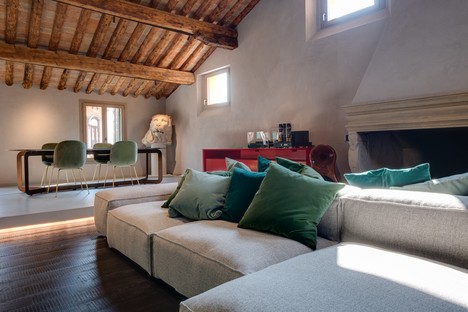 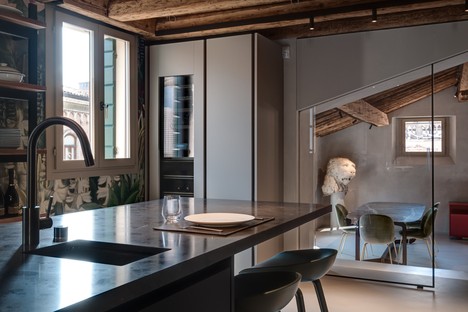 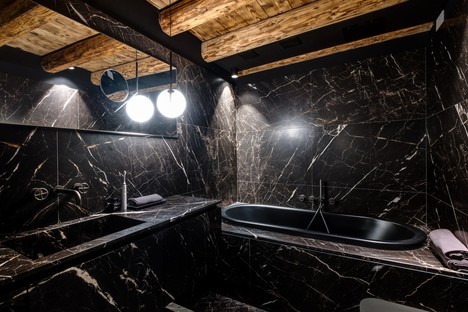 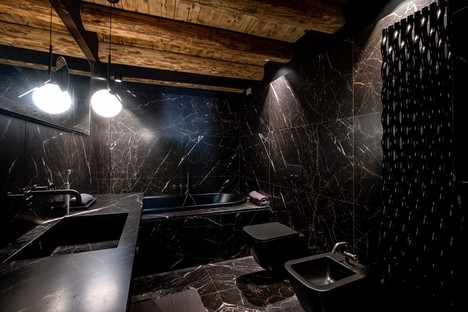 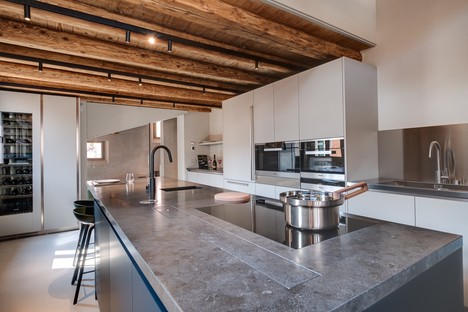 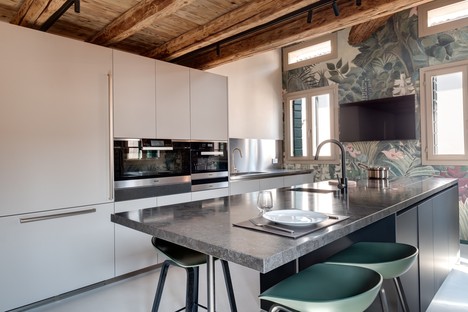 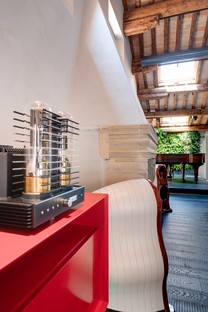 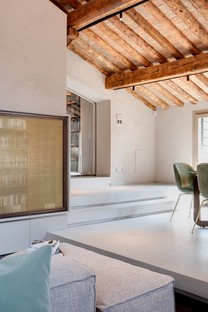 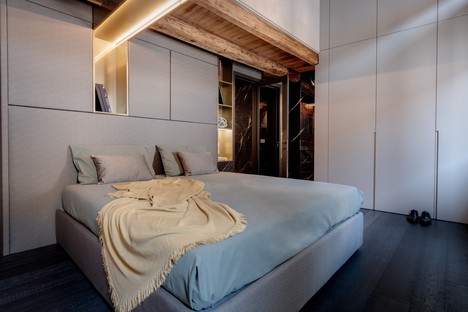 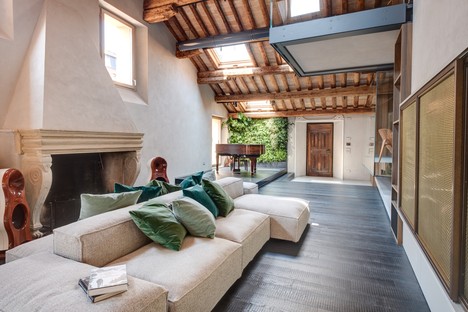