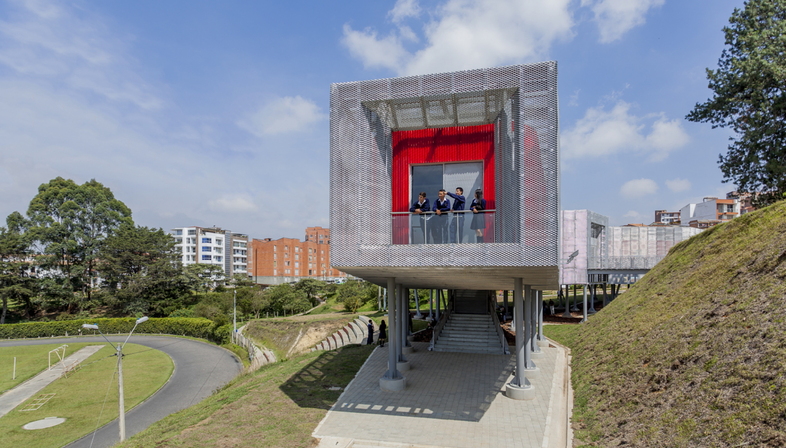 In Marinilla Educational Park, Giancarlo Mazzanti uses the metaphor of the grid as a protective screen and a permeable horizon. Winner of the Next Landmark 2016 contest held by the Floornature portal, Marinilla Educational Park represents the continuation of the research the architect has applied to a number of different places and projects in the past. In this case the goal is to represent paisa, the traditional culture of certain places in Colombia, in such a way that people can still experience it as a community.
Colombians need places to meet and talk, like those Giancarlo Mazzanti has been designing and building for years in problematic locations such as Medellìn. For Marinilla, he has created a boundary space, a public park which becomes a building, a form of architecture which opens up like a town square.
These concepts are expressed in a vocabulary which may be recognised in many of the Colombian architect’s projects, from Medellìn Stadium to Flor del Campo School in Cartagena, made up of transparent or permeable walls, of lightweight structures kept separate from their context as if to underline their temporary nature, determined not to make a bold statement but to allow themselves to be transformed by their users.
In Marinilla Educational Park, Mazzanti draws on a building tradition similar to that of the favelas of Colombia’s big metropolises, a way of living based on reclamation and reuse, on juxtaposition rather than merger and on compact proposition of multiple elements. Standing on a hill in a residential district in Marinilla, the volume rests on metal pillars that seem to be able to move like an animal’s legs, some straight and some intentionally crooked, underlining the concepts of mutability and transience. Prefabricated panels of metal mesh of the kind typically used in construction sites offer an inexpensive and quickly assembled solution.
The thick bases with their graceless design look like the feet of a “mechanical animal”, an extraterrestrial which has come to stop on earth for a while but is ready to change its configuration at any time.
This is also the purpose of the polymorphous layout of the upper volume, which winds freely through space in search of stimulating functional developments and new viewpoints on the landscape, with its big windows cut into the metallic mesh that forms its skin. Its steel skeleton may be seen through the mesh, along with the four classrooms, the most important part of the building, enclosed by red polycarbonate walls. In the open spaces between the building’s skin and the red rooms, intentionally left undefined, what Mazzanti calls the most significant activities of paisa culture take place, such as growing plants and herbs, playing the guitar, drinking coffee or just resting in a hammock. Spaces are connected for activities involving groups of people, not isolated indoors but maintaining a constant visual, auditory and perceptive relationship with the outdoors.
The open layout conveys the concept of indefinite, infinite architecture, the key parts of which could potentially be replicated to suit a different site or purpose. Its characteristic of incompleteness seeks a response from users, who will be able to transform the spaces as they wish, to host concerts, shows, exhibitions and other activities. The metal skin is itself a backdrop which expresses a will to grow, enriched with plants or as a structure for communication. Its transparency makes the building into a landmark, revealing its illuminated belly at night. 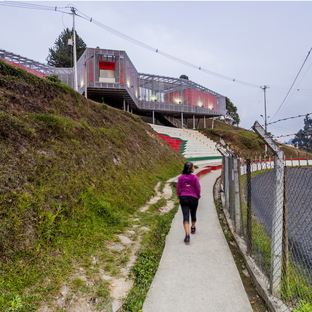 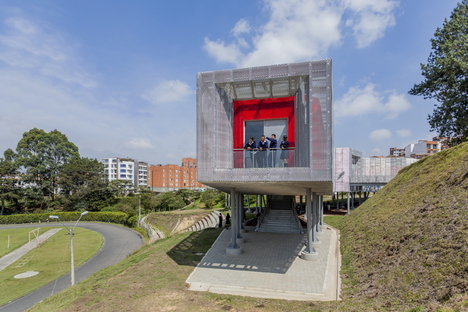 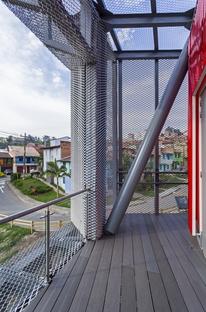 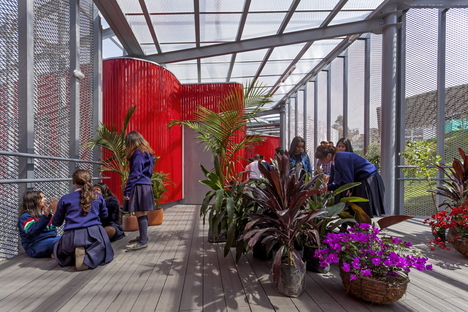 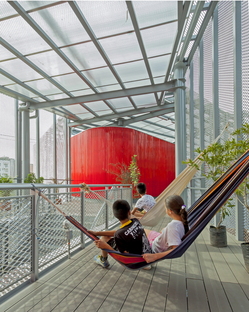 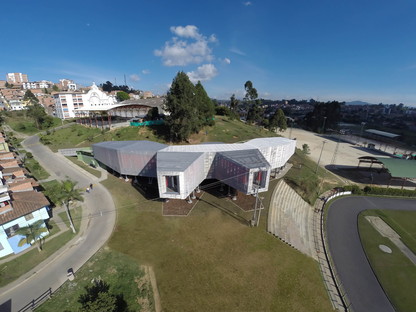