Ferrier Marchetti Studio recently completed work on the new headquarters of Région Ile-de-France, the French region in which the city of Paris is located: a project the architects themselves define as emblematic of both the studio’s approach to contemporary architecture and the urban ambition of the complex, bringing an intriguing sensory experience in the Greater Paris metropolitan area. 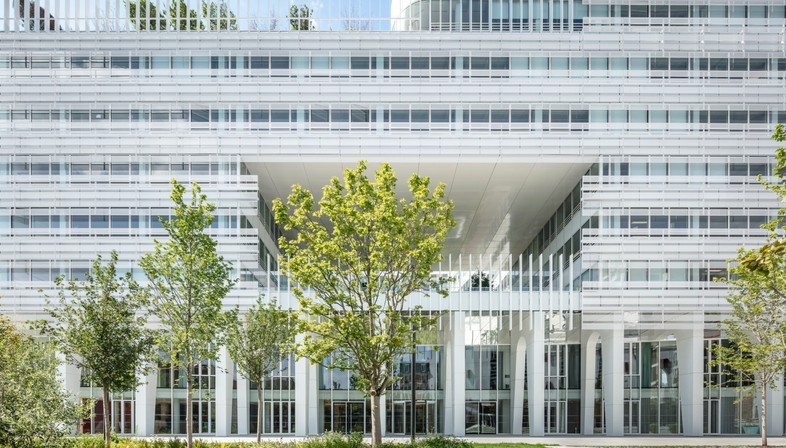 The new headquarters of Région Ile-de-France, the region which includes the city of Paris, were completed recently in Saint-Ouen, France to plans by Ferrier Marchetti Studio, founded by architects Jacques Ferrier and Pauline Marchetti.
The complex consists of two buildings, referred to as “influence 1” and “influence 2”, concentrating in a single location in Saint-Ouen all the region’s offices and employees, formerly housed in a series of buildings all along the left bank of the Seine in Paris’s seventh arrondissement. The new headquarters designed by architects Jacques Ferrier and Pauline Marchetti not only provide plenty of space for 21st-century administration but in many ways offer an important example for the design and construction of public buildings, constituting the first prestigious public institution to set up in the Grand Paris metropolitan area. In ecological terms, both the buildings in the complex have limited energy and water consumption, are easily accessible by people with disabilities, and have plenty of equipment and facilities for improving employees’ work and collaboration.
The two new Région Ile-de-France buildings, though separate and linked only by a walkway, have many points in common and may be interpreted as two variations on the same theme of relationship with the landscape. The two constructions are both courtyard buildings seven floors high; the first is raised above a garden promising plenty of shade and fresh air, while the second is built around a suspended garden, open on a balcony overlooking the city through a vast loggia. The architects also designed a third garden, which will become a plaza serving the entire complex and turning toward the city.
Through a peristyle of tall arcades, visitors and employees come to the entrance hall, an architectural solution conveying all the solemnity and importance of the public place without creating a clear separation cutting it off from the citizenry. The architects’ intent was in fact to convey the image of an open yet frugal institution in harmony with the metropolitan and climatic challenges of its territory.
The influence 2 building contains the hemicycle, a large multipurpose room and a public lobby, organised in a transparent double-height volume bathed in light. The administrative offices are organised and distributed on the upper levels, particularly in influence 1, the first building to be constructed, while the two underground levels in both constructions provide parking. The architects used a simple device to offer optimal lighting in the workspace on all the upper levels, a double-façade system in which horizontal or vertical moulding varies subtly according to the orientation of the façades and the spaces behind them, serving an important function as a sunbreak while bringing rhythm and dynamism to the whole, contributing to the general sense of openness conveyed by the complex. 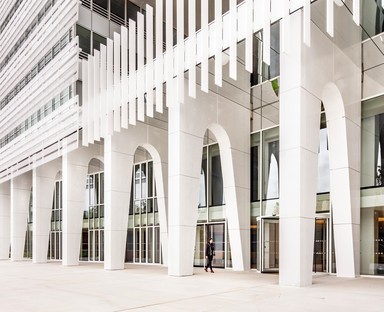 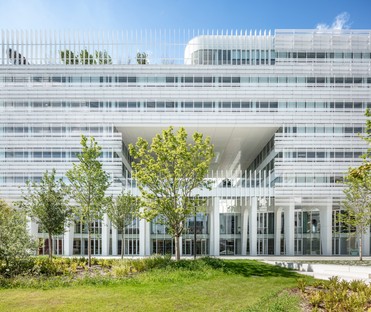 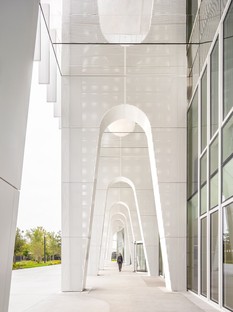 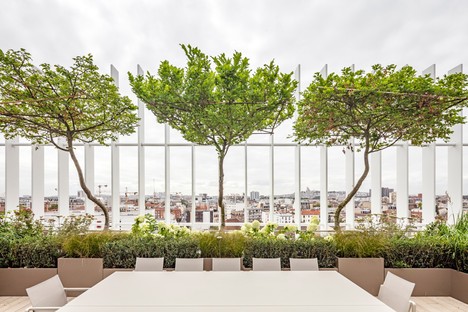 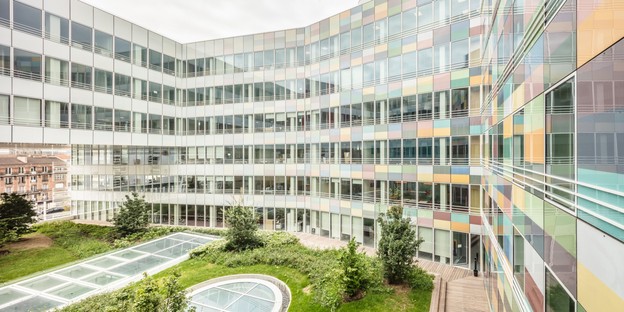 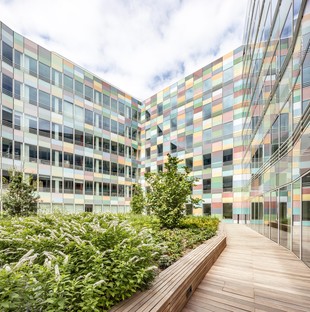 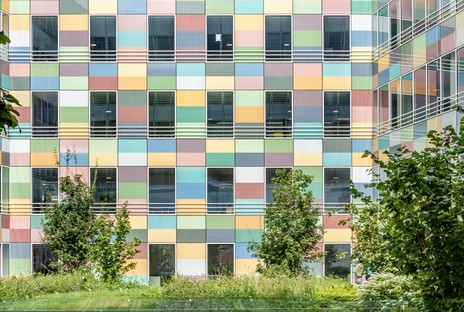 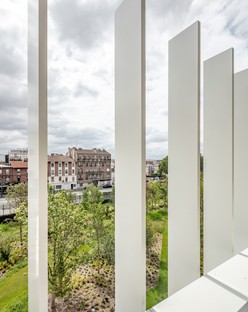 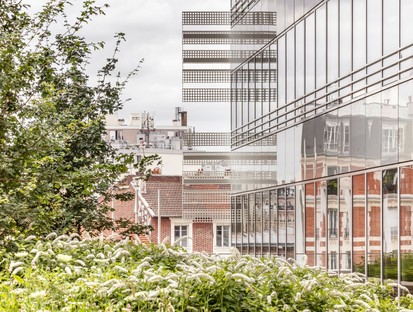 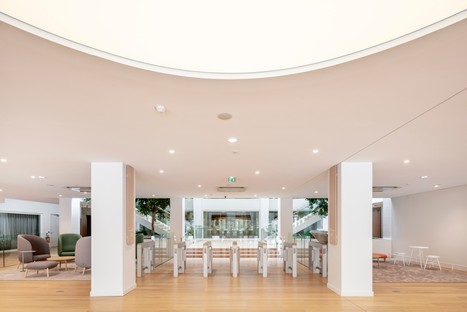 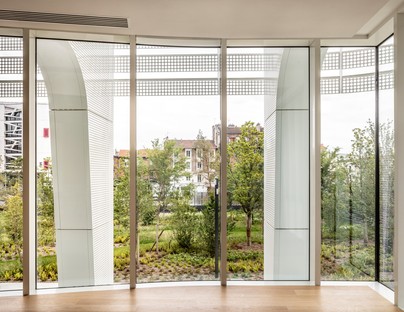 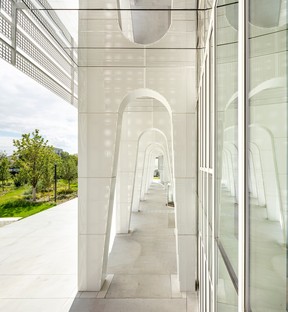 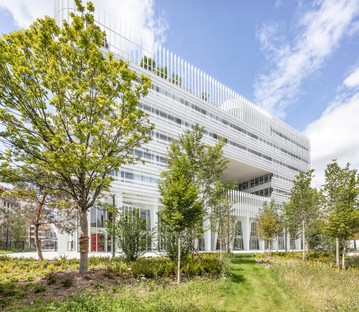 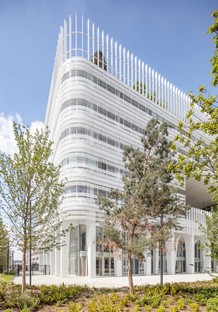 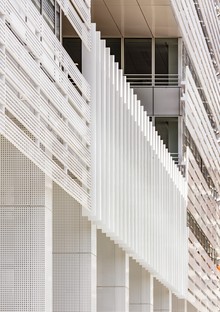 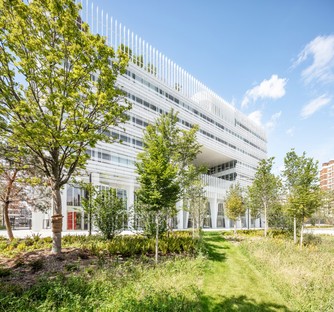 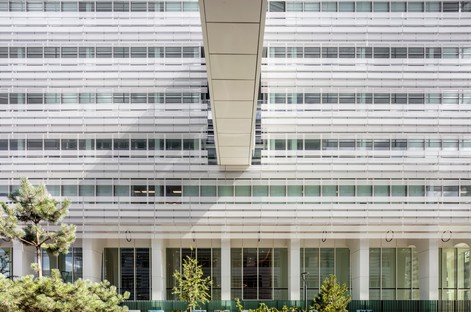 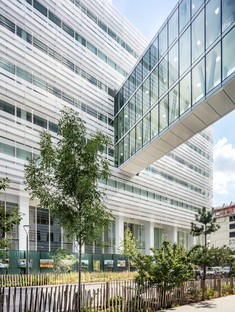 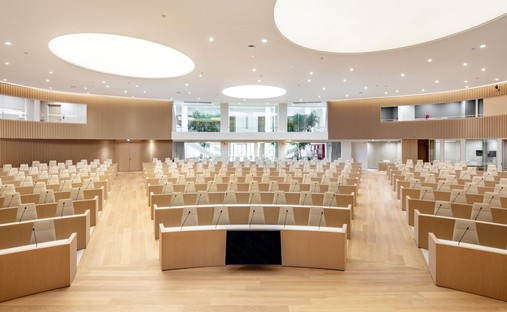 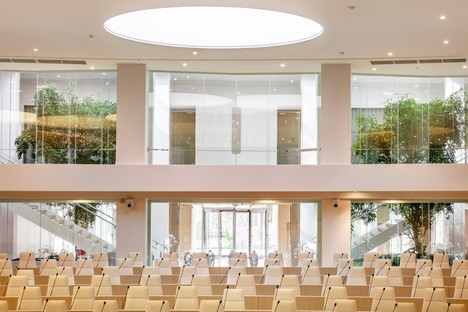