Jerusalem's Van Leer Institute has been completed with the Polonsky Academy of Advanced Studies by Chyutin Architects. The result of a competition, the new building by Israeli studio Chyutin fits the expressive vocabulary of the Van Leer campus and the Jerusalem Theatre to the south, establishing a dialogue with the greenery of the Talbieh district. Israeli studio Chyutin Architects has completed construction of the Polonsky Academy of Advanced Studies, a new building for the Van Leer Institute in Jerusalem's central Talbieh district. Chyutin Architects' project completes the complex of pavilions forming the Van Leer Institute, home to a number of other important scientific institutions on the campus arranged around a luxuriant courtyard garden.
After receiving a generous donation from Dr. Leonard Polonsky, in 2008 the Van Leer Institute announced a competition for construction of the new block open to important architectural studios in the country, in which they were asked to take into due consideration a number of requirements such as preservation of the character and identity of the campus in relation to its visual horizon and appearance and compatibility with the masterplan for the Talbieh district.
This green, hilly neighbourhood established in the 'twenties is still one of Jerusalem's most prestigious residential neighbourhoods, home to the residence of the Israeli president and to cultural buildings such as the Jerusalem Theatre to the south of the Van Leer campus. The historic neighbourhood, the local stone covering the walls of the buildings and the balanced relationship between architecture and nature are the key themes of Chyutin Architects' plan for the new Polonsky Academy of Advanced Studies, chosen by an international panel of judges.

Chyutin's design includes a public outer façade facing the Jerusalem Theatre and an all-glass inner wall which reveals the intimate architecture of the courtyard garden. The Jerusalem stone covering the theatre built by architect Michael Nadler in 1971 demanded use of a similar calcareous stone in the new building, Hebron stone, which is very popular in local constructions. The slabs on the southern wall form a grid of vertical elements of different widths. What seems at first to be a single slab of stone is revealed on closer inspection to be full of dynamism and character, changing again at the patios, where the Hebron stone is no longer a wall covering but becomes a sunbreak, with slabs of stone alternating with gaps that leave the interior visible. In this construction of bold volumetric impact, the façade is lightened to anticipate the complete transparency of the northern wall.

Seen from the courtyard garden, the entire building rests against the gentle slope of the hill, covered with vegetation. The main entrance is on the western side, an oblique wall introducing the view of the garden. The building now reveals its organisation on two levels above ground (for research), the top one with a recycled bamboo brise soleil and the bottom one of glass. While the building's horizontal nature is clearly evident with its bold concrete floor slabs extending out to anchor themselves to the hill, the bamboo elements form a vertical screen (like the Hebron stone slabs) establishing an overall figurative balance. From garden level, 4 metres from the entrance level, visitors go down to the library, conference halls, reading rooms and coffee shop. 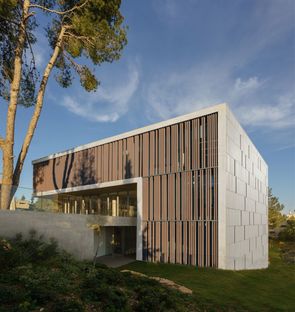 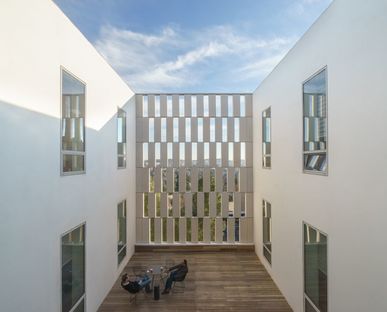 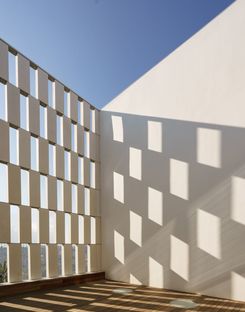 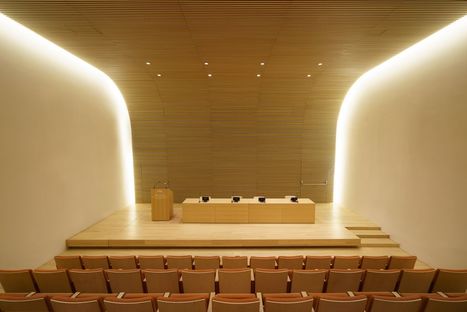 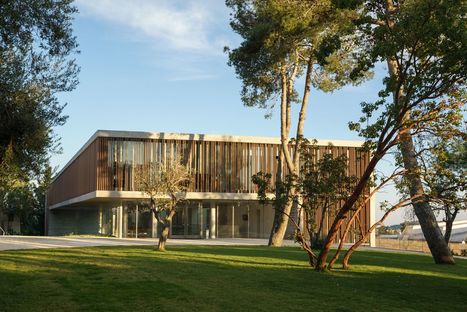 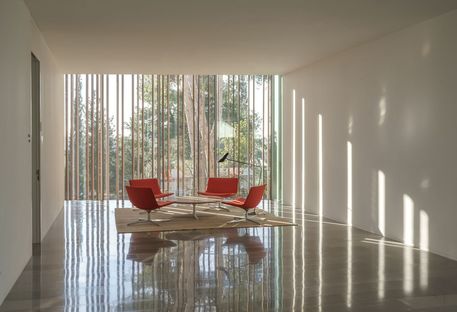 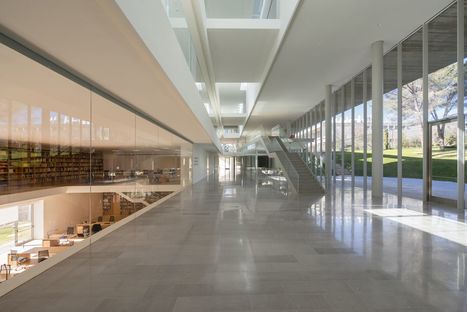 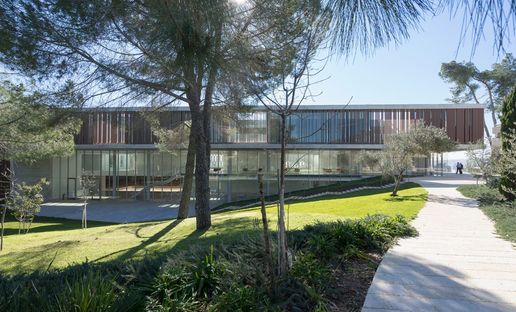 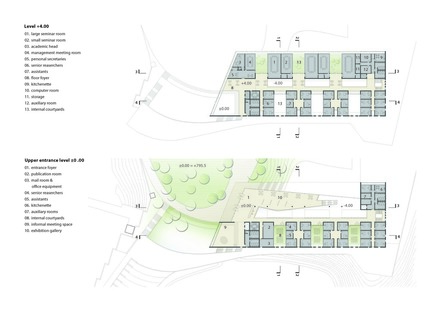 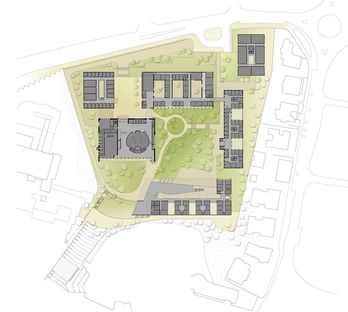 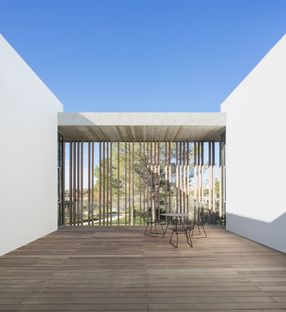 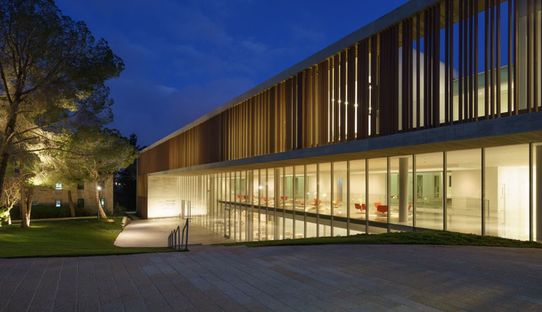 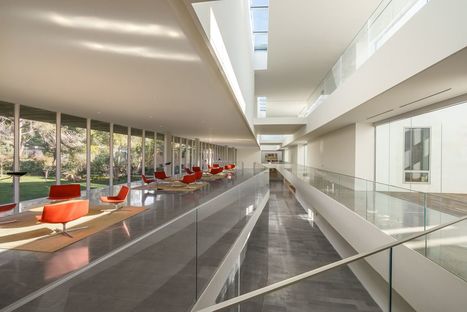 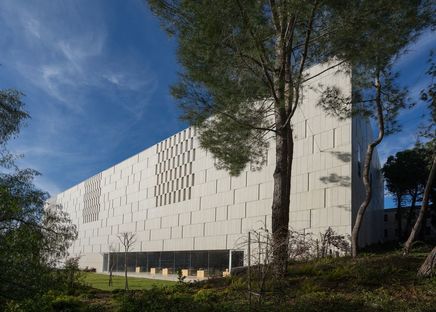 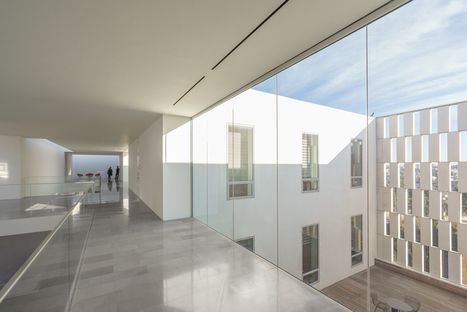 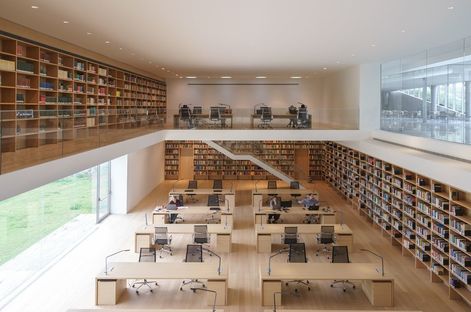 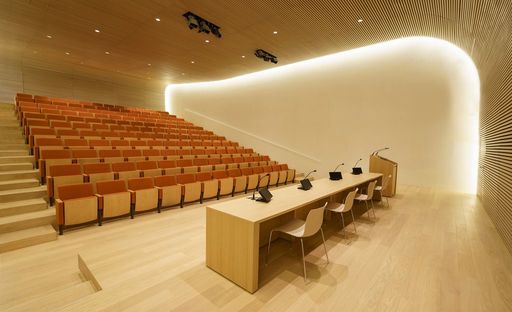 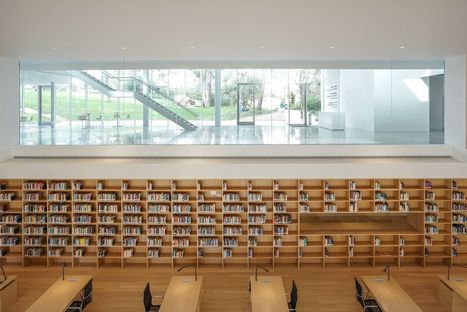 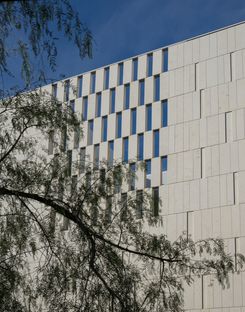 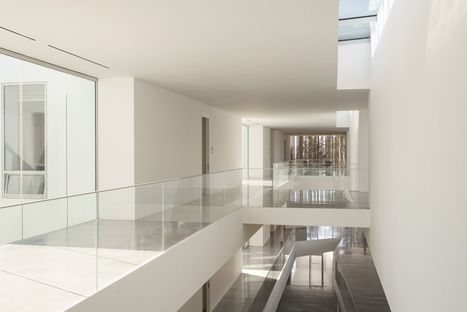 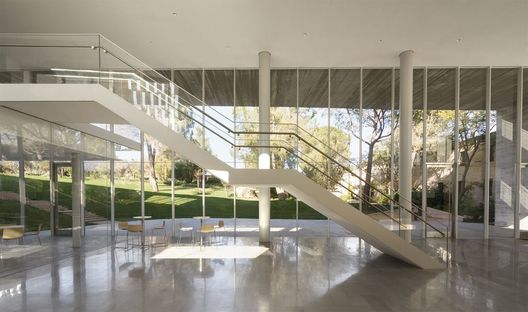 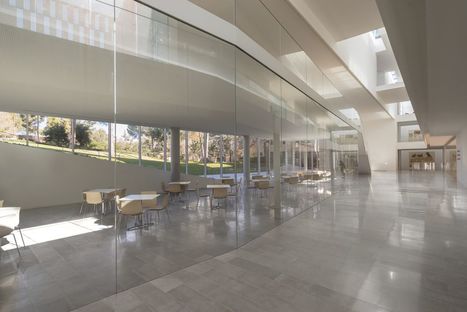 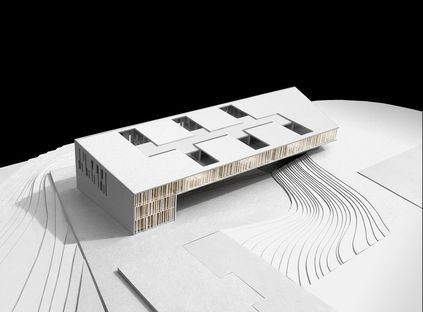