Courbes is a residential project by Christophe Rousselle’s studio in Colombes, in France’s Hauts-de-Seine department, named after the sinuous curves of the overhangs that characterise and diversify the levels of the two buildings. The residential project is part of the plan for urban renewal of the ZAC Charles de Gaulle district. 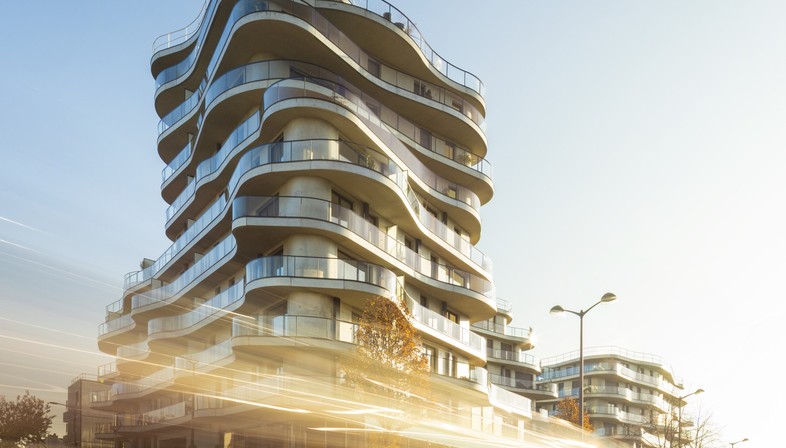 In the region of Île-de-France, in the northwest hinterland about 10 km from Paris, close to La Défense, Christophe Rousselle Architecte designed the Courbes housing development: two residential buildings containing a total of 134 apartments with large retail outlets, characterised by the effect of the sinuous curved balconies that give the complex its name, "Courbes" (French for curves). 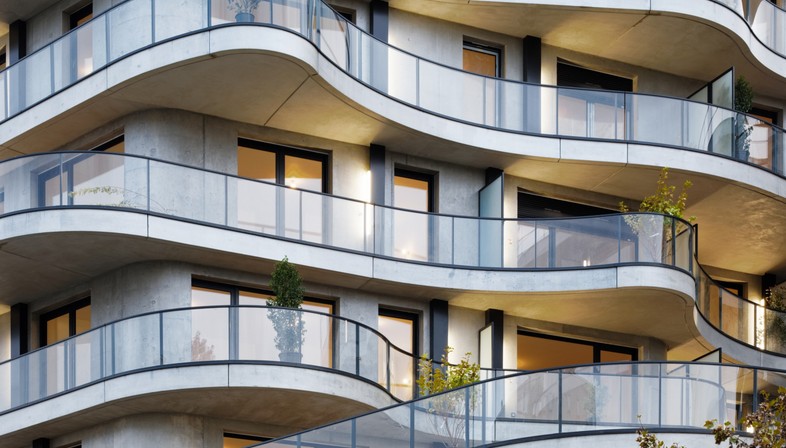 Architect Cristophe Rousselle founded his studio in 2004 and has completed projects all over the world, primarily in France, Asia and Latin America, obtaining important results and specialising in projects of particular density and height. The studio is currently working on a number of projects for which it has won architecture competitions, including an office and hotel tower in Frankfurt, a housing development on the Lower East Side in Manhattan (NYC) and a large residential development for the Hilton group which is also in Colombes/La Défense, measuring more than 17,000 sqm.

The Courbes project is part of a wider-ranging urban redevelopment programme in the district, a part of ZAC (zone d'aménagement concerté) Charles de Gaulle, recognisable by its urban fabric characterised by eclectic projects completed in the 1980s and 90s. The district has grown rapidly in recent years as its popularity has risen, along with demand for housing and commercial space, following construction of a tram line connecting it with the city centre and with La Défense.
In this context, architect Christophe Rousselle designed Courbes, a development composed of two apartment buildings with a double-height ground floor made available as large-scale commercial space.
The two buildings are positioned around the perimeter of the lot to restore alignment with the streets around it and leave the middle free of constructions. The heart of the lot is in fact a pedestrian path planted with more than 30 umbrella pines (Pinus pinea). The two buildings’ vertical development reveals what is unusual about them: the volumes look light because of the curved lines of the balconies, which underline the best views on each floor and model every unit in a different way. Despite the residential density of the complex, each floor is designed on the basis of its orientation, to offer maximum comfort for its inhabitants. The transparencies and reflections of the vertically misaligned curved balconies provide important outdoor spaces, averaging 22 sqm of extra space per apartment. The glass parapets around them follow the gentle curves of the cement, and their matt finish reflects the intense sunlight, an operation completed with more than 2 km of exterior glass surfaces. The architects took great care to ensure that the façades would be lit up at night in a way that reinforces the complex’s status as an urban landmark. Lighting also plays an important role in the interiors, as in the main hall of the residential complex, where a dramatic light sculpture composed of 500 aluminium tubes dominates the double-height space. 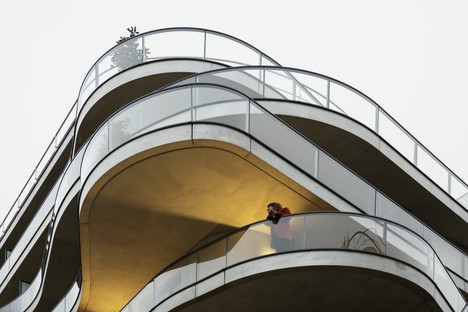 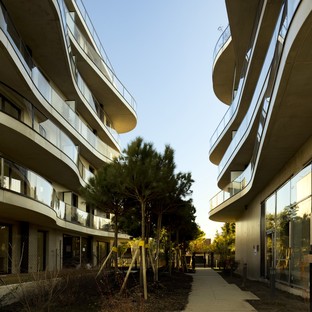 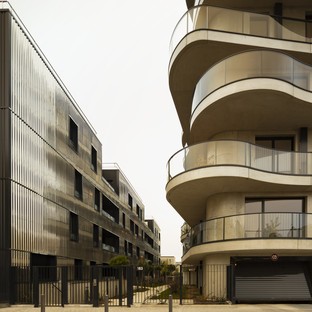 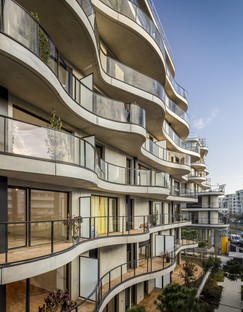 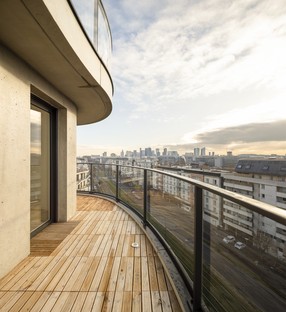 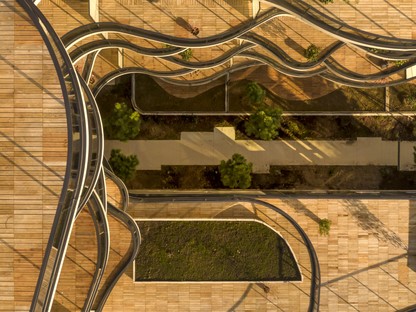 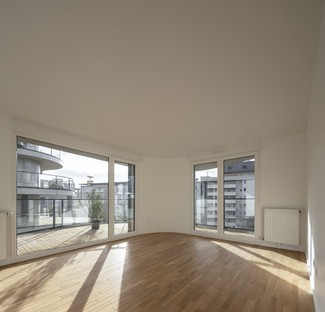 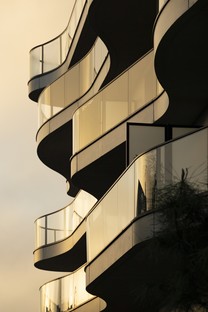 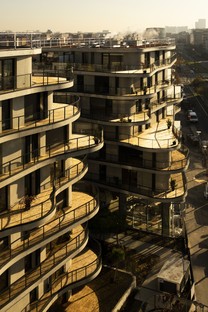 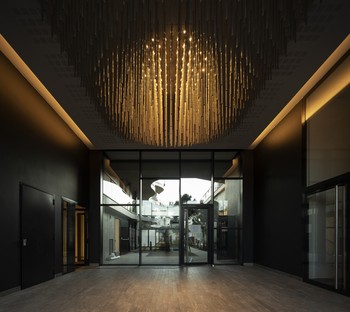 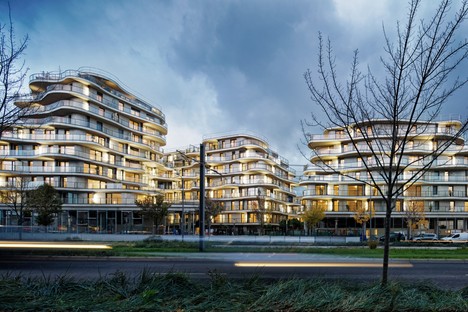 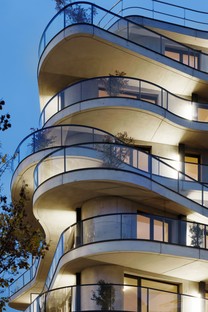 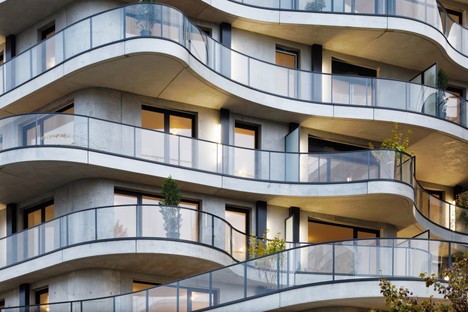 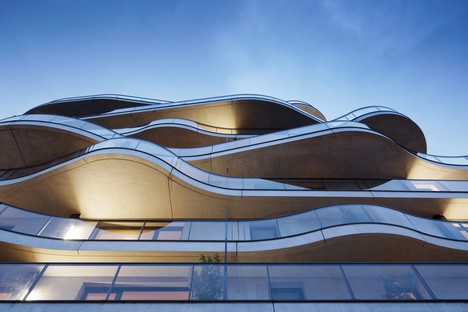 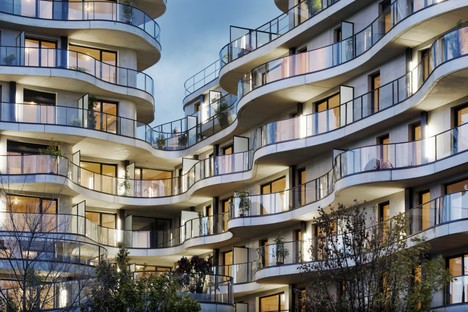 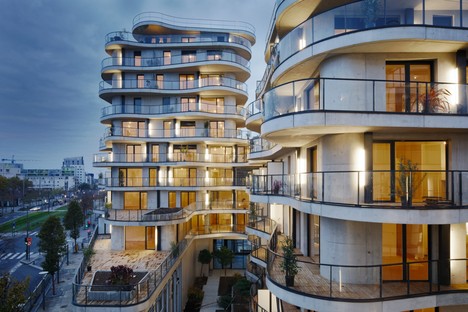 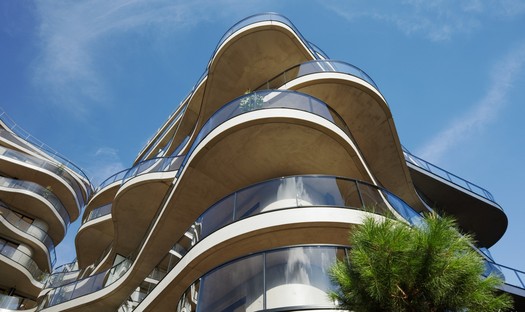 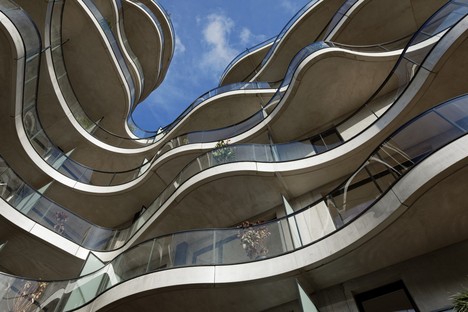 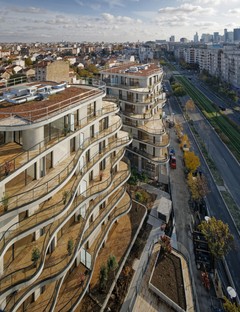 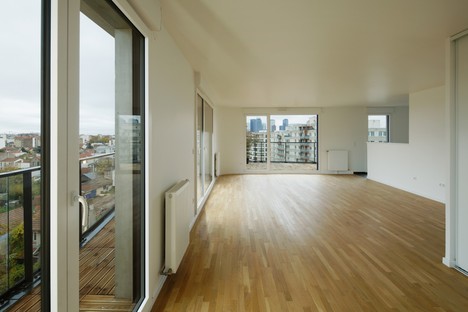 LAND with GEZA Architettura, nature and sustainability for the Furla Progetto Italia headquarters