C.F. Møller Architects’ Copenhagen International School Nordhavn is the school of the future. Photovoltaic panels on the roof supply more than half of the school’s electricity. The project has won numerous awards, most recently the 2018 AZ Award in the Commercial/Institutional Architecture Over 1,000 SqM category. 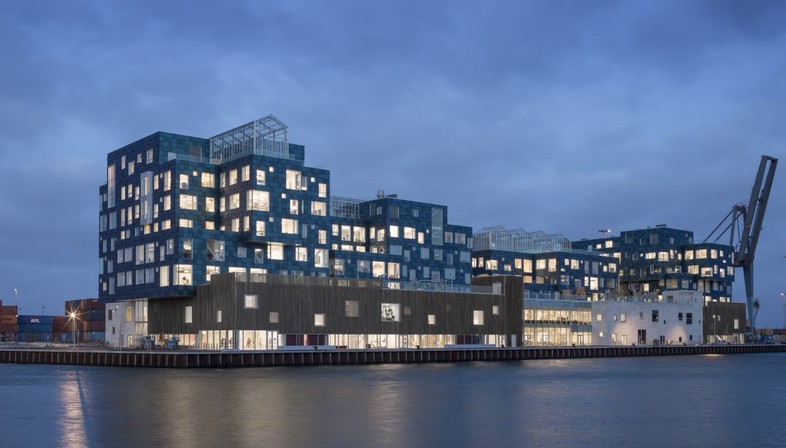 The Danish educational system is considered the best in Europe, and architecture definitely plays a role in this, as in the case of the Copenhagen International School Nordhavn by C.F. Møller Architects. The building has 1200 students of different ages, from elementary school to high school, and was immediately nicknamed the “solar energy school of the future”.
The building is covered with 12,000 photovoltaic panels, set at different angles. They look like sequins or fish scales covering the façades to create reflections and add dynamism. The photovoltaic panels cover a total of 6048 sqm and supply more than half of the building’s electricity every year, making the school one of Denmark’s biggest solar installations integrated into a building, producing an estimated 200 MWh or more every year.
What’s more, the project’s strong point sets a concrete example of environmental responsibility and sustainable living to be conveyed to the new generations through study. Students have access to information on its functioning and on the electricity production of the photovoltaic panels used in physics and mathematics lessons. 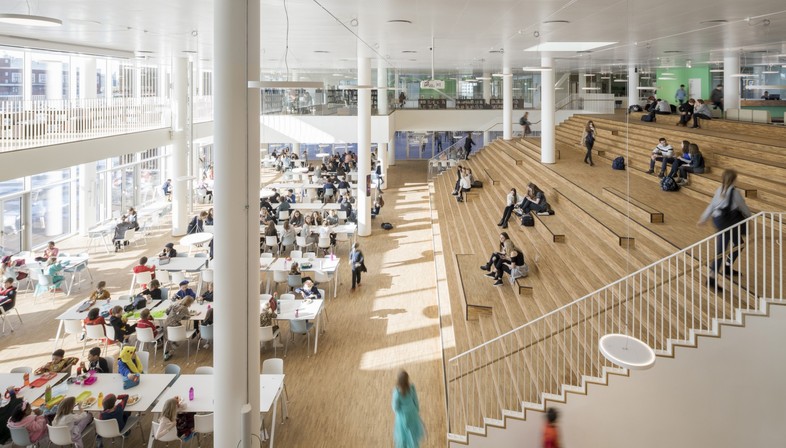 The school designed by C.F. Møller Architects was built in Nordhavn, Copenhagen’s port area, which has seen construction of a lot of new buildings in recent years, on the coast of the Øresund, the strait dividing Denmark from Sweden.
The architects have connected the school with the city around it, so that the school would be open to the citizenry. The outdoor space in front of the school is set up as an urban space serving the public, offering plenty of opportunities for relaxation, sports and children’s play.
The building as a whole looks like an aggregate of different volumes: four large tower blocks five to seven floors high designed for students of different ages emerge out of a large horizontal base.
The division into four main units facilitates the school’s internal connections, the organisation of different communities of students and the spaces needed for their activities. The smallest children require particularly large classrooms where they can engage in a variety of activities, and have outdoor areas and the theatre in the immediate vicinity, while older students need laboratories and group study areas. 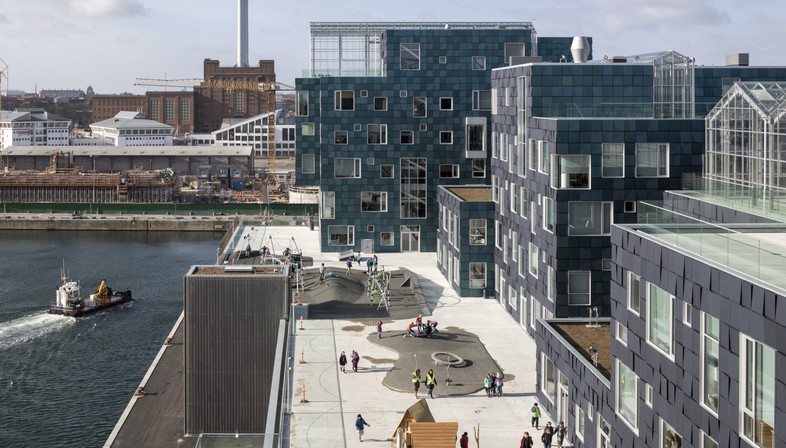 The large horizontal volume joining together and forming the base for the four school units or blocks has different cladding and façades, declaring from the outside that it also performs extra-scholastic functions. This common base contains all the activities common to students of different ages and those involving the general public, such as sports facilities, the foyer, the cafeteria, the library and the spaces for theatrical and musical performances. This solution makes it possible to keep the different routes separate and exclude or close off school premises when public initiatives are underway.
The terrace of this big base provides a safe raised playground for the smallest pupils.
C.F. Møller Architects’ design has won numerous awards, including the 2017 Iconic Award and, recently, the 2018 AZ Award in the Commercial/Institutional Architecture Over 1,000 SqM category. 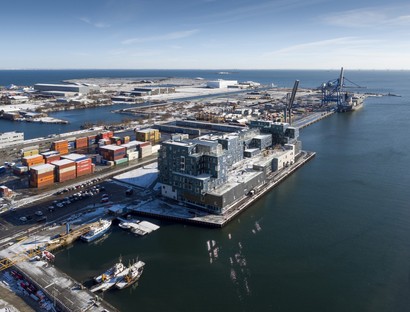 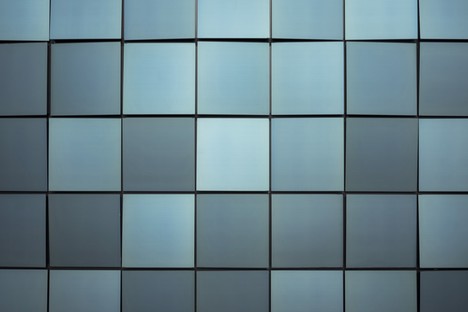 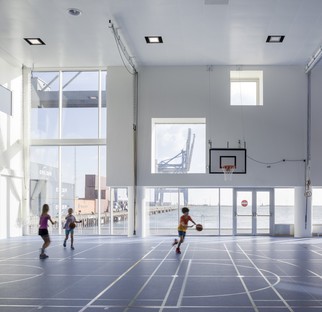 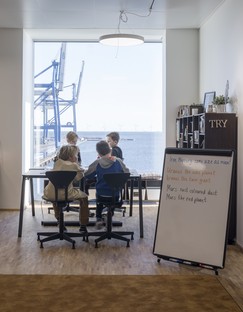 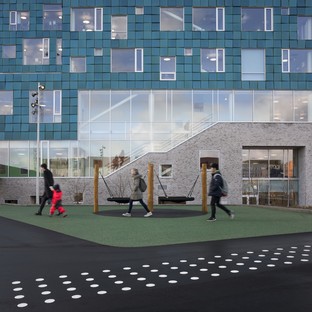 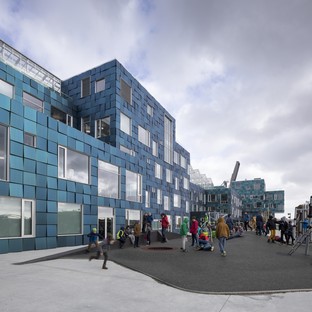 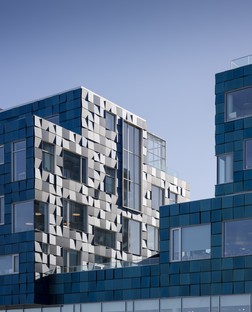 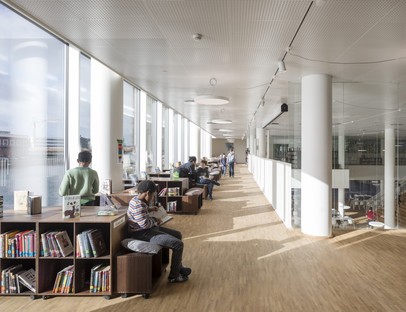 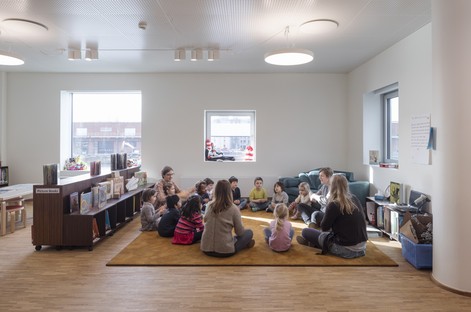 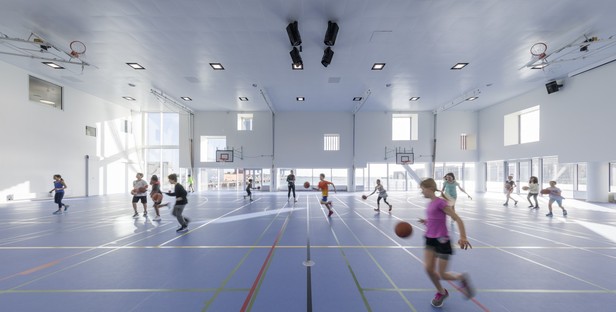 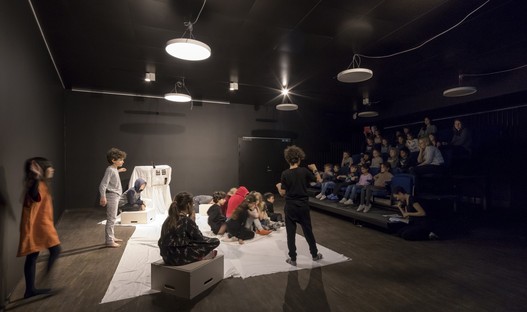 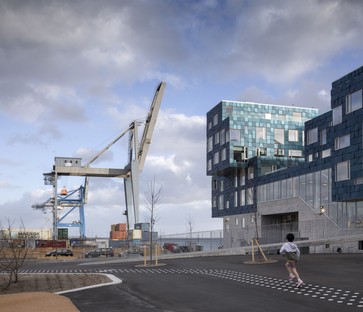 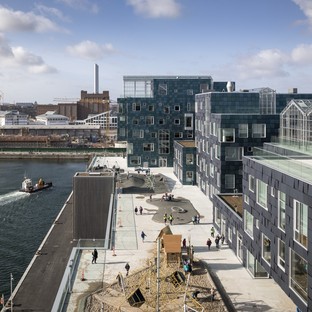 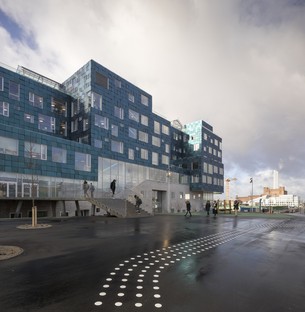 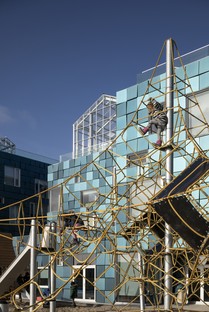 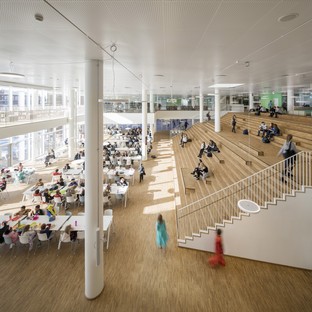 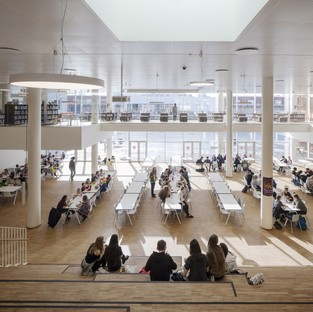