Architect Stefano Bindi has created the new headquarters of the Ortofrutta Caligari & Babbi company in Savignano sul Rubicone (in the Emilia-Romagna region). An architecture of great visual impact, designed to minimise the environmental impact and to offer a beautiful and healthy working environment, a landmark visible from the Via Emilia. 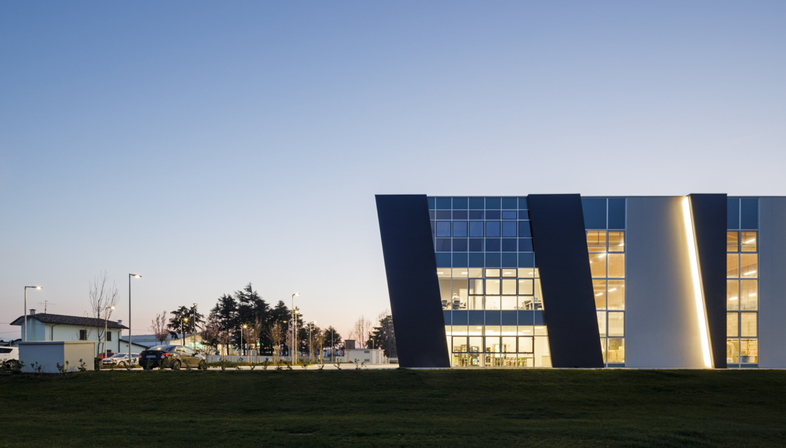 When it comes to industrial architecture, anonymous-looking warehouses, located along the peripheral streets of our cities typically come to mind. Buildings in which the comfort of workers or the attention to the environment are certainly not the main priority.
But, as is often the case, there are exceptions to the rule. One of these can be found in Savignano sul Rubicone (in the Emilia-Romagna region) and is the new headquarters of the Ortofrutta Caligari & Babbi company, specialised in the processing and distribution of fennel. The company’s continuous growth has made it necessary to expand its operations. Indeed, since its foundation in 2006, Ortofrutta Caligari & Babbi has distinguished itself by a strong, 360 degree attention to sustainability, a fact that certainly had an influence of the design choices made by architect Stefano Bindi.
The site, located along the Via Emilia road axis – and therefore the gateway to the south of Savignano – is part of a rather heterogeneous area with a mixed artisanal / industrial / residential development. As architect Stefano Bindi explains: “Even before the design of the building, we had to draw up an Urban Implementation Plan, in which the road layout and the shoulder areas needed to be redefined.” These undeveloped areas, 30 metres to the east and 20 metres to the south, have become key elements in the sustainable strategy of the project, as they have allowed the addition of a 500 cubic metre overflow reservoir on an area covering about 3000 square metres in the large field located on the east side. The reservoir is used as an emergency “container” in the event of cloudbursts, which unfortunately are more and more frequent in the area. A 25 cubic metre tank that collects rainwater has also been introduced, used for the irrigation of the green fields on which native plants grow. In addition, before ending up in the nearby consortium canal, the network of rainwater is filtered by special tanks that allow the dirt of the loading and unloading areas to settle.
The choice of drained pavement in the parking area, surrounded by fast-growing plants, allow for a more rapid dissipation of the temperature, which ends up being about 30 °C lower than the temperature of traditional asphalt.
The architecture created by Stefano Bindi is the natural continuation of sustainable thinking, which was the underlying element of the urban design. “Our intent and that of the clients was, as much as possible, to combine internal functionality with a clean and recognisable image on the outside.
Of course, without forgetting the economic feasibility and environmental sustainability of the business when fully operational”, explains Stefano Bindi.
With the way the building has been oriented and the careful planning of the workflows, with the integrated solar panels and the windows for natural lighting, it produces almost more energy than it actually consumes. The building is warmed up in winter and stays cool over the summer months, thus resulting in significant savings in terms of utility bills and a reduced consumption of environmental resources.
And it does all this with a great deal of elegance. Stefano Bindi has in fact resorted to the use of prefabricated elements, with a dry plasterboard structure for the part of the new headquarters housing the offices which, thanks to its particular shape and orientation, works passively during the various times of the year. Externally, on the projecting sides and on the balconies and terraces, the cladding in high quality reconstructed wood slats offers a beautiful view for those inside, with passers-by on Via Emilia also enjoying an equally nice view of the building itself.
The headquarters of the Ortofrutta Caligari & Babbi company designed by Stefano Bindi are, indeed, a landmark and a beacon of sustainability in the field of industrial architecture. 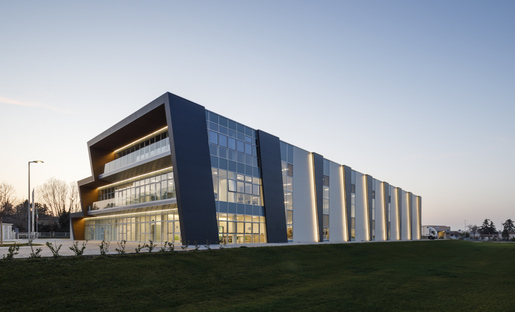 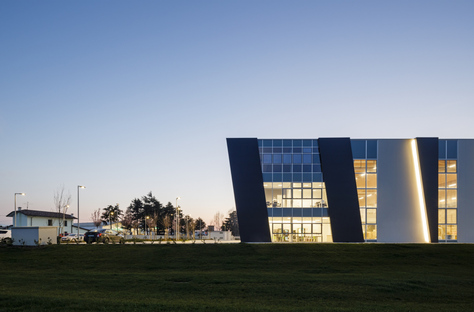 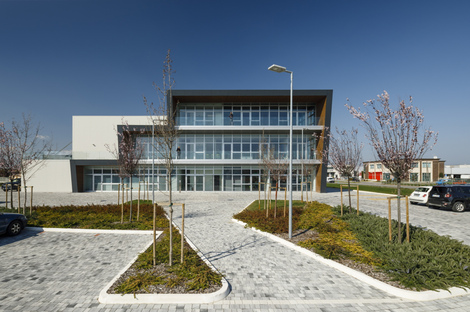 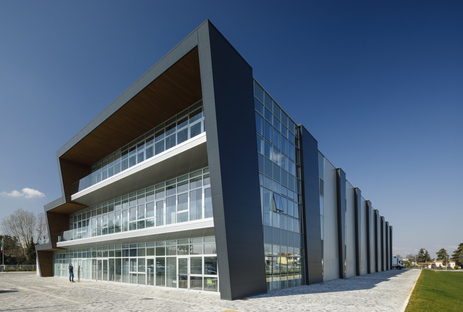 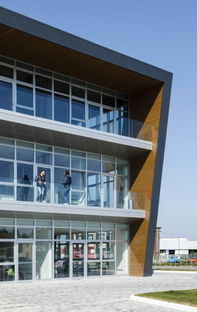 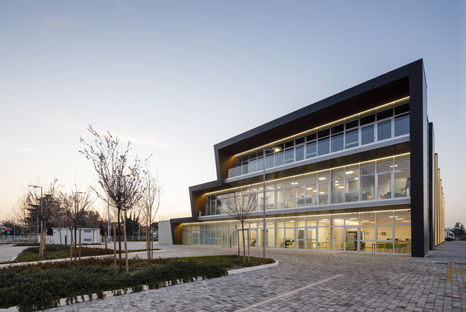 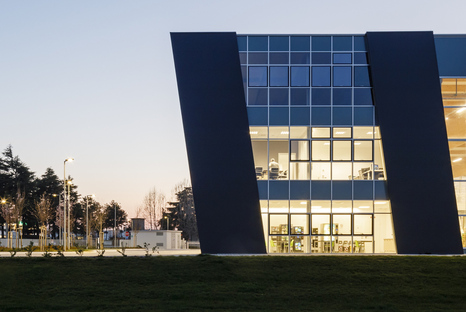