A new school that is based on the typical architectural elements used in the ancient cities of the state of Rajasthan in India. Sanjay Puri Architects carefully studied the site and responded to the local climate to construct an inherently sustainable school. 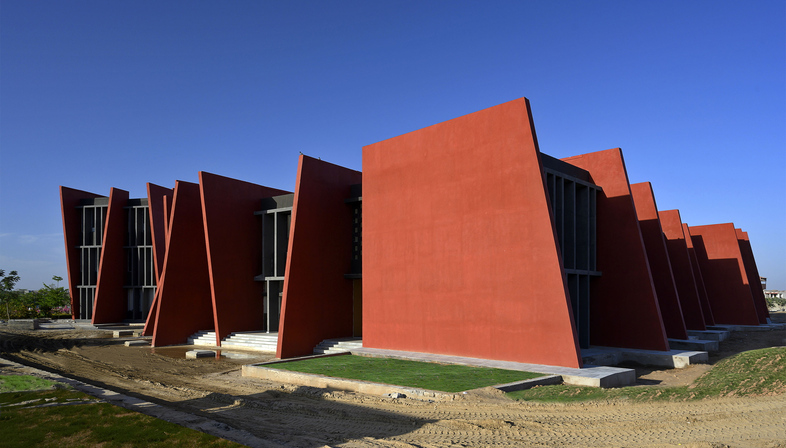 Ras in the region of Rajasthan is a town in India about 400 km south-west of New Delhi, the country’s capital city. Rajasthan is the largest state in India, located in the country’s north-west and sharing a long border with Pakistan. The state is mainly known for its numerous palaces, ancient fortresses and other cultural monuments from the Middle Ages.
And this vast historical and architectural heritage is what the designers from Sanjay Puri Architects used as their reference when they designed The Rajasthan School, a low-rise, 3-level piece of architecture with lots of open and semi-open spaces between the buildings that form the whole school. From a distance, the complex is reminiscent of the famous medieval fortresses of the many principalities that once constituted the region.
Aware that the local desert climate means temperatures rise to more than 35°C throughout most of the year, each of the classrooms has been oriented towards the north so they are not hit by direct sunlight to reduce the heat gain inside.
The school’s auditorium, primary school, and administration area occupy the southern side of the site, opening onto a large sheltered open area on the north side. The secondary school classrooms, library and cafeteria are located beyond that.
The semi-sheltered courtyard has multiple angular pathways, connecting the two parts of the school with landscaped play zones that stimulate the students to explore their environment.
The formal solutions proposed by the architects for this area - the heart of the new school - include a series of linear trapezoidal frames and sun shading. This creates an ever-changing pattern of light and shadow that follows the course of the sun as it crosses the sky. The layout is deliberately fragmented to fit the open, landscaped spaces in between the learning zones, which improves the microclimate and comfort of the users.
Open, naturally-ventilated corridors are used for circulation. These semi-sheltered pathways cross through and skirt around the central courtyard. Angled, protruding vertical walls act as sunshades to reduce the impact of the sun and heat gain from the east, west and south sides, thereby generating cooler interiors.
Apart from these passive design aspects responding to the extreme climate of Rajasthan, the entire electricity needs for the school to operate come from the residual power generated by a cement factory in the vicinity, which is also the client that had the school built. And all the water used in the school is recycled and reused for the landscaped areas.
The Rajasthan School by Sanjay Puri obtains its unusual, welcoming character - and its intrinsic sustainability - from the old cities of Rajasthan, with an informal layout, interspersed open and enclosed volumes, designed in response to the hot climate.  The colours echo the shades of tradition, thus engaging with the past and enabling the new complex to blend even further into the urban context. A virtuous example of school architecture that combines attention to sustainability with a profound knowledge of the territory and needs of contemporary learning. 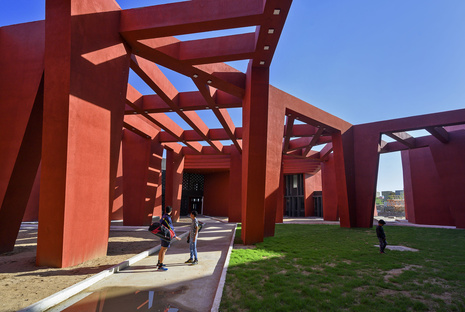 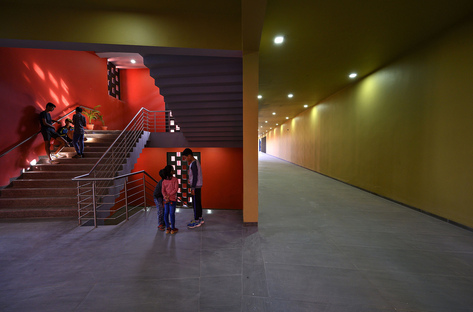