The Norwegian studio, Reiulf Ramstad Arkitekter, known for its iconic architecture in the Norwegian landscape, the Trollstigen for example, has completed a landscape project in the Alsace region, France. A greenway with a highly poetic architectural approach to commemorate the past and to open up new horizons. 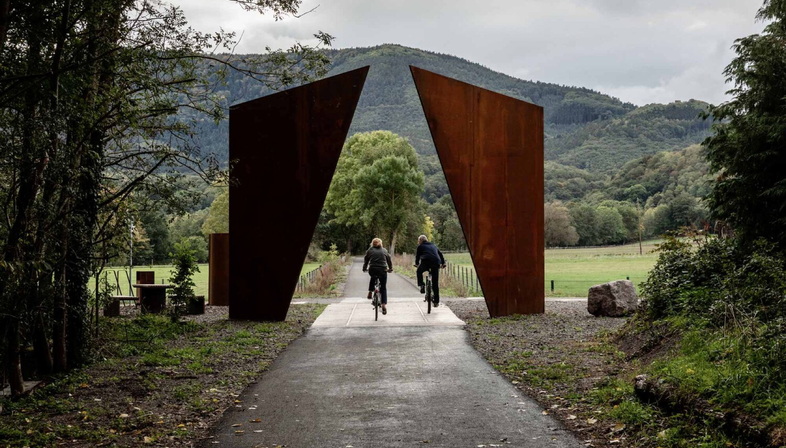 The greenway called Chemin des Carrières – the quarry route – is also known as "Portes Bonheur”, which, loosely translated, means the gates to happiness. It is an original creation for the Communauté de Communes des Portes de Rosheim by Norwegian studio Reiulf Ramstad Arkitekter RRA, in collaboration with the French landscape architects, Parentheses and the engineers from Berest. In 2016, this team won a call for proposals to convert the old railway lines connecting Rosheim and St-Nabor in Alsace into a pedestrian and cycling track for tourists.
The two small villages in Alsace used to be linked by a train track that was abandoned in the early 2000s when the St-Nabor quarries that had been operating since the era of Louis XIV closed. They were then made safe and left for nature to do her thing.
The idea for the project was to remember the past of these places and at the same time create something for the future. The old train track that winds its way through the Vosges landscape is now the basis for a discovery tour of forgotten landscapes and a new perspective of everyday landscapes. The project by RRA was crafted for locals and tourists alike as a greenway to walk or cycle along. The original track had a dual purpose, transporting both quarry stone and passengers and this has been replicated here too, by connecting places and challenging the imagery often associated with the idea of travel.
The 11-km track tells a story in five chapters through different landscaping proposals that aim to improve the comprehension and enjoyment of the landscape itself. The designers from the Norwegian studio Reiulf Ramstad Arkitekter are very au fait with this kind of thing. They are known to the general public for their architecture and their scenic lookout scattered along the National Tourist Routes in Norway. Not surprisingly, careful observers of the Chemin des Carrères will find the material references to the famous platform of Trollstigen on the fjord of the same name, made from Corten steel, as well as the organic, rounded shapes of the Selvika rest area on the Havøysund, where a curved boardwalk leads down to the beach.
The greenway starts in Rosheim, and here the narrative is all about the past. The pavilion is made from Corten steel, playing with irregular concave and convex shapes to create a kind of maze, where visitors are free to roam. In that area, the train tracks have been preserved, and the design team added bespoke benches, leaving openings in selected spots to frame the landscape to make it a perfect place to sit back and relax, take in the views and enjoy quiet contemplation. The next stop is Boersch, where water is the name of the game, with a large amphitheatre at a point at this widening of the river to improve access to the water.
Then, Leonardsau tells the story of the earth. When you emerge from a long, green tunnel, you are greeted with two sheets of Corten steel that amplify the opening effect at the end of the forest corridor towards the open landscape. They symbolise a gateway – the Portes de Bonheur – and open up a viewpoint towards the exposed Mont St-Odile. This is followed by Ottrott that works with the existing architecture of the old railway station. Here, the concrete paths criss-cross the area to link the homes to the historical heritage.
The trail ends in St-Nabor, at one of the quarries being slowly repossessed by nature and this area is all about luck, and the potential of recovery, given that these quarries are symbols of vegetation taking hold of the land again after its stint as an industrial site. Travellers who climb the stairs to one of the highest platforms here are rewarded with the most spectacular part of the work: a Corten steel scenic lookout with views of the Rosheim valley and the Alsace plains. The layout of this platform was inspired by a four-leaf clover, and visitors are lucky enough to be able to enjoy the view that opens up before them. A fitting recompense for people who hike or bike along the “Chemin des Carrières” before heading off to savour the area’s famous food and wine specialities. 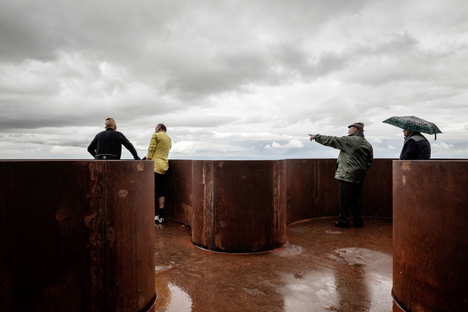 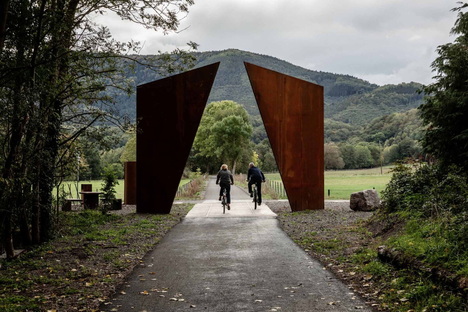 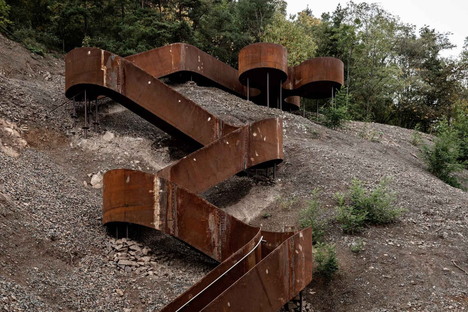 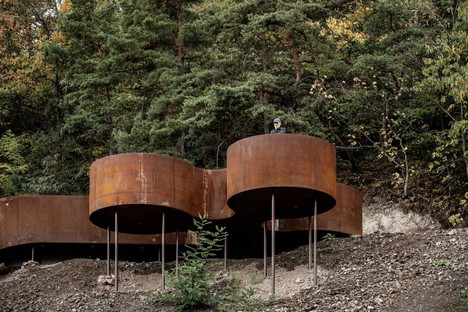 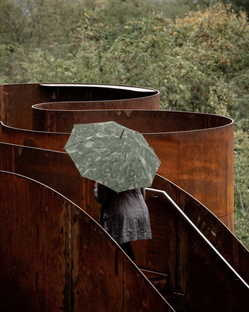 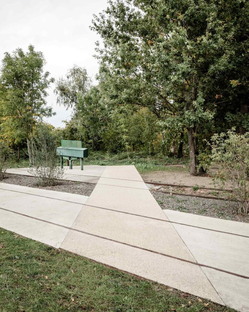 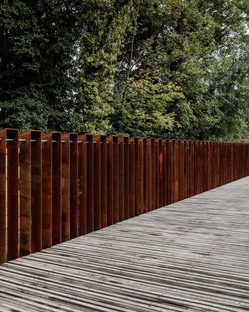 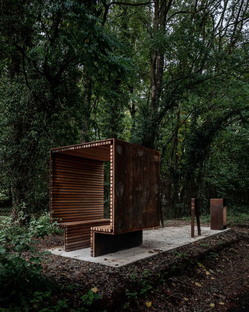 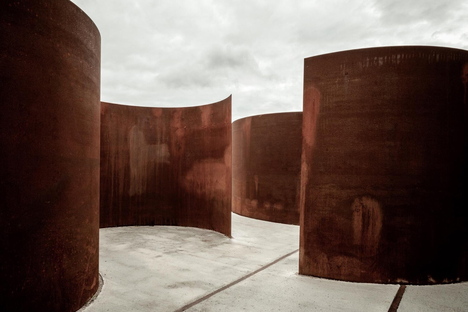 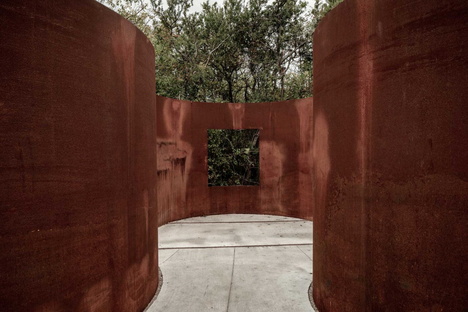 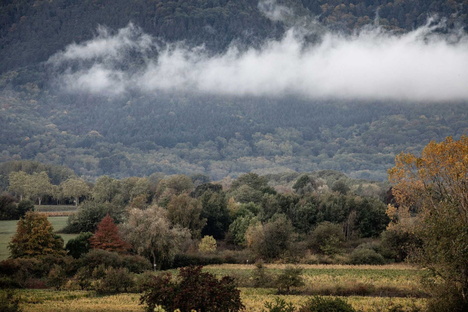 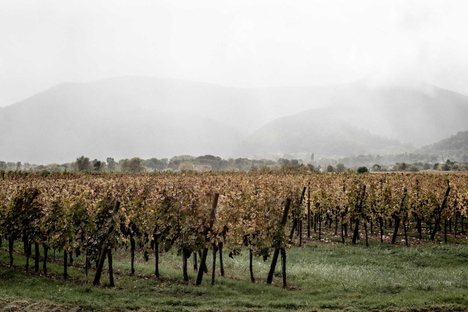 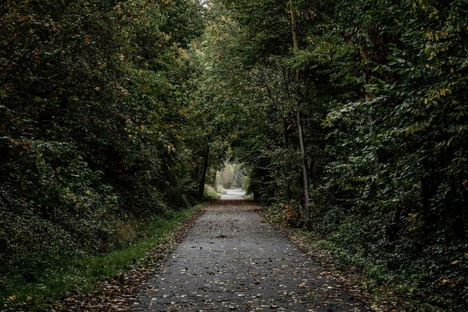