The Canadian firm Lemay is a leading provider of integrated design services for the built environment and has now worked its magic on the 1967 International and Universal Exposition or EXPO 67 site in Montreal, Canada. The design team has given the site original heart a total makeover as the new Espace 67, and their concept blends the enchanting natural setting and rich historic past of this exceptional site, to give the city a truly versatile space. 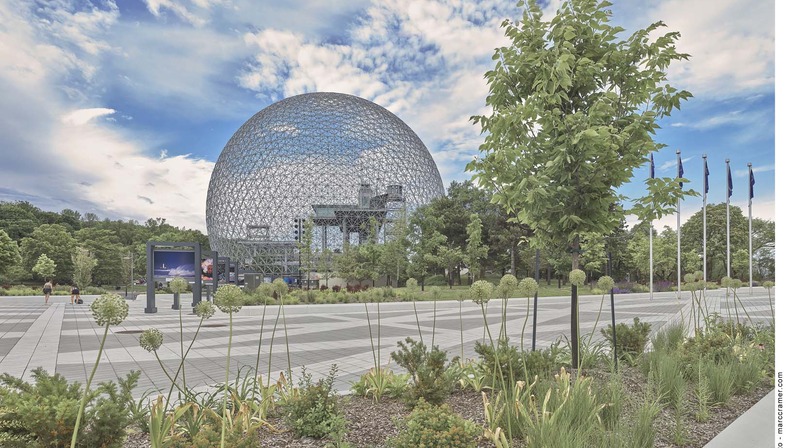 L'EXPO 67 Esposizione Internazionale e Universale del 1967 a Montreal in Canada è stata l'esposizione mondiale di maggior successo del XX secolo. Rimase in seguito come una collezione permanente di padiglioni internazionali conosciuti come "L'uomo e il suo mondo” sulle due isole che la ospitano: Île-Sainte-Hélène, notevolmente ampliata, e Île-Notre-Dame, costruita artificialmente per l'evento. L'EXPO 67 è ancora oggi considerato un momento di riferimento sociale, culturale, politico e tecnologico nella storia canadese. La riqualificazione del sito è un'eredità del 375° anniversario della città di Montreal nel 2017.
Nel 1967 50 milioni di visitatori scoprirono per la prima volta la destinazione iconica a Montreal, il cuore originale dell'EXPO che oggi, mezzo secolo dopo, è oggetto di un restyling totale come The 1967 International and Universal Exposition or EXPO 67 in Montreal, Canada was the most successful World’s Fair of the 20th century. Afterwards, the exposition remained as a standing collection of international pavilions known as “Man and His World” on the two islands hosting it: Île-Sainte-Hélène, which had been greatly enlarged, and Île-Notre-Dame, which had been entirely created for the event.  EXPO 67 is still regarded as a social, cultural, political and technological landmark moment in Canadian history. The revitalization of the site is a legacy of the City of Montreal’s 375th anniversary in 2017.
So, more than half a century after 50 million visitors first discovered the iconic destination in Montreal, the original heart of EXPO 67 has had a total makeover with the new Espace 67 project on the Île-Sainte-Hélène by transdisciplinary designer Lemay.
Defined by a whimsical new Central Concourse, an alley linking the island’s Biosphere by Buckminster Fuller to Alexander Calder’s monumental Trois Disques sculpture, the transformed multifunctional site now features a 65,000-seat natural amphitheatre as well as a riverside walkway. The project also introduces an Event Village and Natural Agora, eloquent public spaces that can accommodate a variety of functions year-round, successfully recreating the spirit of EXPO 67.
With its integrated design approach, Lemay developed a meaningful adaptive reuse and holistic design strategy to create an original user experience via enhanced reception services, flexible event space. The upgrade also makes it easier for visitors to orient themselves. By integrating landscape and building architecture, urban design, brand image and signage, the firm created a new attraction in harmony with nature and culture, revealing the site’s genius loci, which is derived from its riverfront character, its stunning views of the city, its historical significance and its diverse vocations. In the words of Andrew King, Partner and Design principal at Lemay, “It has been reborn as a destination unto itself, now able to fully accommodate a wide range of major events.”
The team rethought, restored and reshaped the space into a geometric pattern defined by inclined planes and the iconic central pathway, which now maximizes views of the Calder sculpture and improves visitor orientation. The pattern of the paving stones in the new amphitheatre is inspired by the triangular architecture of Buckminster Fuller’s geodesic dome, now known as the Biosphere.  This triangular design is reproduced in the floor of the amphitheatre as well as in the perforations of the surrounding walls.
Lemay’s thoughtful and strategic integration of nature, culture and site memory has created another unique urban destination, enhanced by a landscape signature highlighting the majestic river, spectacular urban and natural panoramas and the multifunctional vocation of a treasured site EXPO 67 has lost none of its original character, even more than 50 years after it was created. Just the opposite, this attentive, respectful redevelopment of the site has made it even more charming: an attraction that meets the needs of third-millennium users. 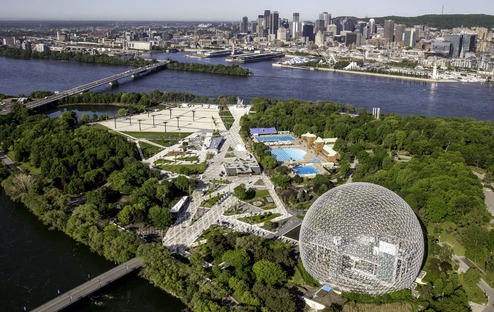 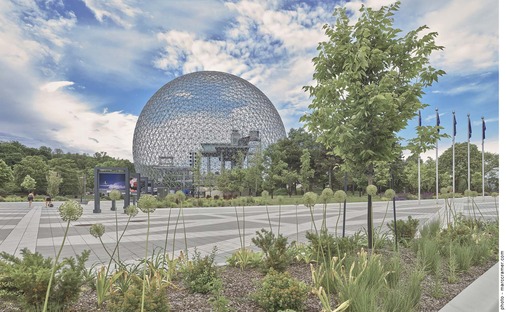 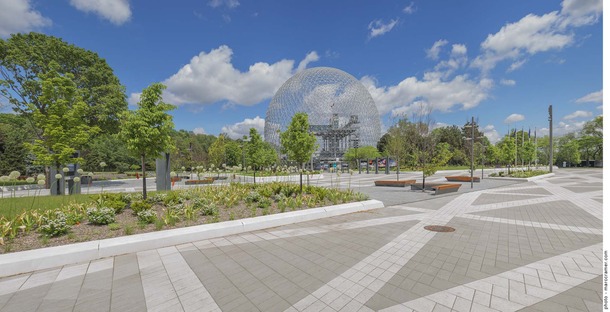 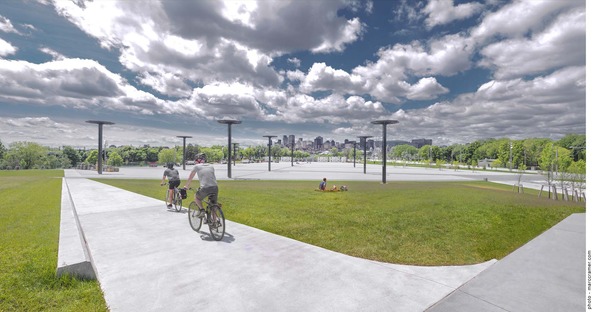 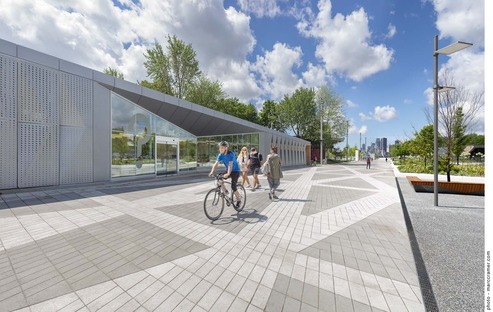 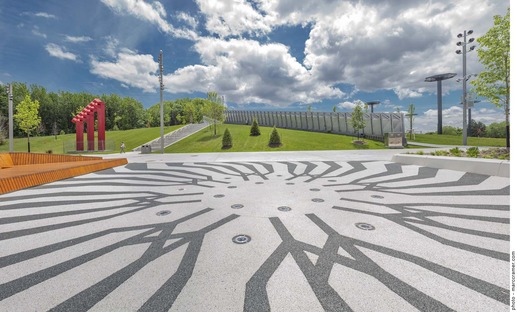 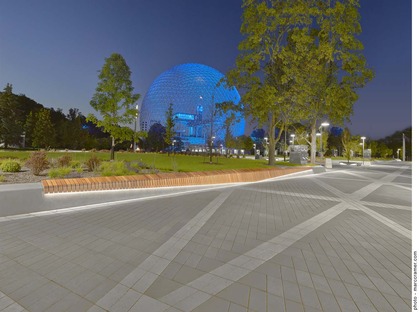 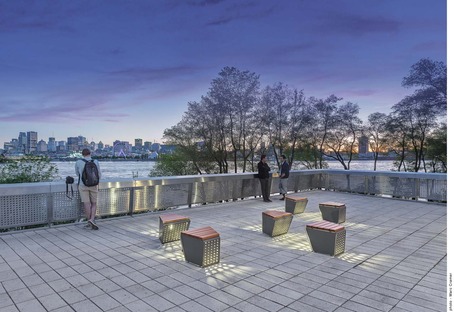 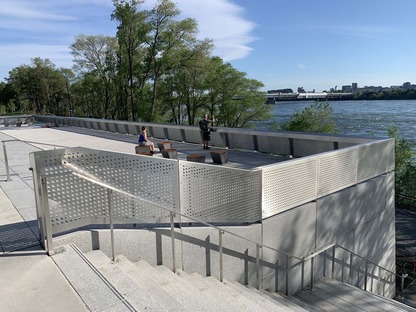 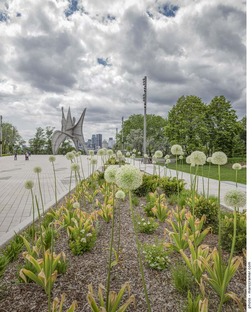 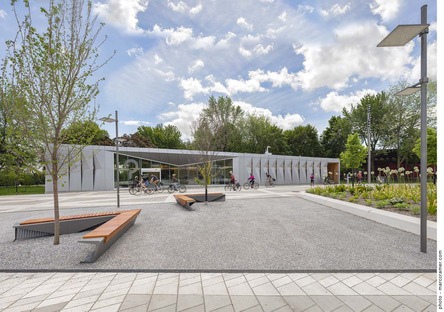