Every summer, ISAD (Instituto Superior de Arquitectura y Diseño, the Higher Institute of Architecture and Design) of Chihuahua carries out a workshop called “Taller del Desierto” (or, “The Desert Workshop”) where students design and build an intervention for a specific public space.

Every summer, ISAD (Instituto Superior de Arquitectura y Diseño, the Higher Institute of Architecture and Design) of Chihuahua carries out a workshop called “Taller del Desierto” (or, “The Desert Workshop”) where students design and build an intervention for a specific public space. Last year’s proposal, created in Chihuahua, was newly presented during the Mextrópoli architecture festival.


The “Pabéllon del Desierto”, or “Desert Pavilion” was created for the fifth edition of MEXTRÓPOLI, an event organised by magazine Arquine which, for four days, transforms Mexico City into a forum dedicated to architecture, gathering architects, town planners, students, artists and influencers.
This temporary architecture was created by the workshop “Taller del Desierto”, organised by ISAD (Instituto Superior de Arquitectura y Diseño, the Higher Institute of Architecture and Design) of Chihuahua, where students design and build an intervention for a specific public space. In 2017, the pavilion “Manos a mi Parque”, a series of metal structures containing furniture and supporting a pergola made out of repurposed wooden pallets, was built in a neighbourhood in the outskirts of the city of Chihuahua. The design was also the result of the collaboration between the architects of studio Urbánika and those who actually lived in the neighbourhood.
This year, a variation of the pavilion was presented at the Mextrópoli architecture festival in Mexico City. It was also the only project coming from Northern Mexico.The main objective was to take advantage of the replicability and adaptability of modules to create a temporary intervention in the Alameda Central, the oldest public garden in the American continent and the very heart of the Mextrópoli events.
This way, the architects proposed two volumes whose spatial layout responds to the environment around the kiosk of the Alameda to create a new space that establishes a dialogue with the surrounding circular benches. A third module was installed, perpendicular to the kiosk, along the path leading to the Fuente de las Américas and the Hemiciclo, the monument dedicated to Juárez.
The three modules of the pavilion were painted green to create a contrast with the context, whatever that context could be: the deserted landscape of Chihuahua, as it happened last year, or the Alameda Central of Mexico City, with its flowering jacarandas.
This is an absolutely sustainable intervention, as temporary architectures are easy to mount and dismount and are realised with recycled industrial materials. The pavilion offers to passers-by benches and shade, a resting area and an informal meeting place. It represents an added value for the events of the Mextrópoli festival and is a tangible proof of the fact that urban fittings improve the quality of life of the citizens who can live and use the city spaces 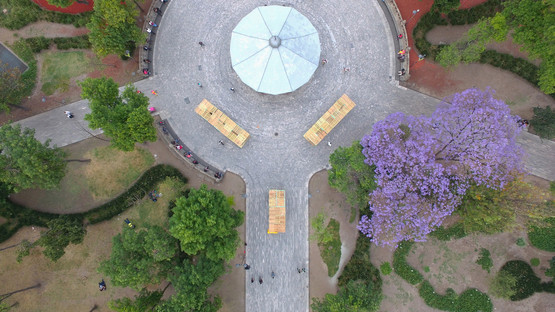 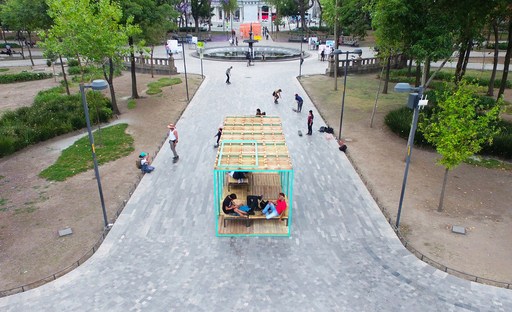 Next Gen Park installation in Brno by KOGAA

Make Architects and the Portsoken Pavilion in London

AZABACHE by A-001 Taller de Arquitectura