Mexican architectural studio VERTEBRAL worked on El Terreno community garden and educational centre in Mexico City during the COVID-19 pandemic. The multipurpose pavilion made of recycled materials and the garden convincingly bring together the themes of education, sustainability and people-centred design. 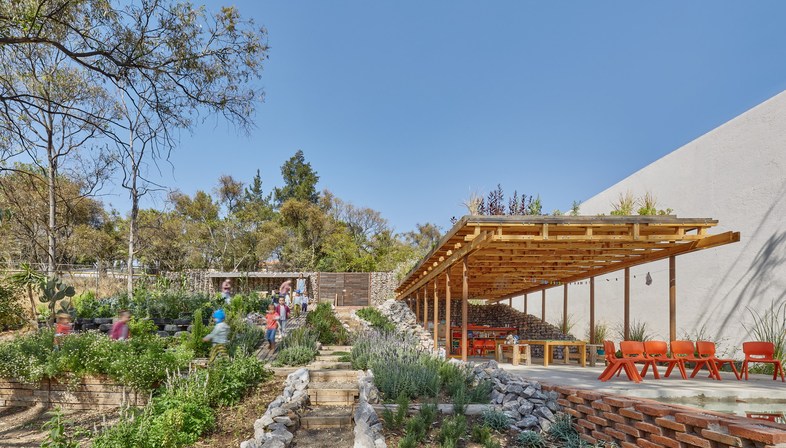 The importance of human beings’ connections with the earth is well-known, but they are twice as important in cities where there is little space for developing this relationship, as maintaining such connections is not only good for the environment but good for people, too. This is clear to architects of Mexican studio Vertebral, founded in 2016 in Mexico City, site of their latest project, El Terreno. As the architects say, “being based in a city as busy and complex as Mexico City has influenced the practice, which is drawn to natural environments and open outdoor spaces. That attraction has led the firm to design gardens and to build around them, essentially bringing the forest into the city.”
And this is exactly what they do in El Terreno. The project, set on a very fertile hill perfect for planting an urban garden in which to grow flowers, herbs and vegetables, was developed to allow young people in the local community to stay connected with one another and with the earth while learning about the environment, the cycles involved in food production, and sustainable living.
To further this purpose of educating people about sustainability, it made sense to build the multifunctional pavilion constructed along with the vegetable plot from recycled materials, and so the architects provided leftover materials from their previous construction projects. It was important for the studio to successfully construct a 100% recyclable building based entirely on a sustainable approach developed specifically for the site, because every project must be approached through a process that begins with the final users, who must identify with the project in order to accept and love it.
Taking a closer look at the details of the construction, it is built into the hill, opening up gradually toward the garden and vegetable plot. Sections of iron rods are bent and welded to serve as supports, inserted in walls made with gabions filled with stones from the excavations on the site. The roof has trusses made of the wood the architects used as formworks for casting concrete in previous projects; all these trusses were assembled by volunteers from the local community, underlining the shared, social nature of the El Terreno project. Vertebral considered it important to create a flexible multipurpose pavilion reflecting their vision of the future of architecture. "Strictly-defined spaces quickly become obsolete. By contrast, anonymous and ambiguous spaces are resilient and multifaceted, allowing for shifts in their significance and purpose among users”.
El Terreno soon became a self-sufficient project thanks to revenues from sales of plants and vegetables grown in educational programmes and then sold to local shops and cafés. It is also a virtuous example of respect for the environment: rainwater is collected through a system on the pavilion’s green roof, passing through pipes which are also used as structural columns. Lastly, the water falls into a reservoir, from which it is pumped back into the orchard. The electricity required by the pavilion is generated by solar panels, and sewage from the composting toilets is used as a natural fertiliser.
El Terreno is a model of how education, sustainability and design can help build a better future, without giving up beauty, even on a limited budget. 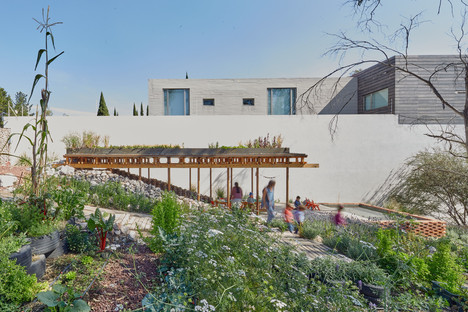 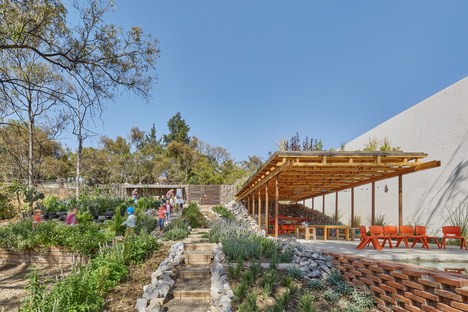 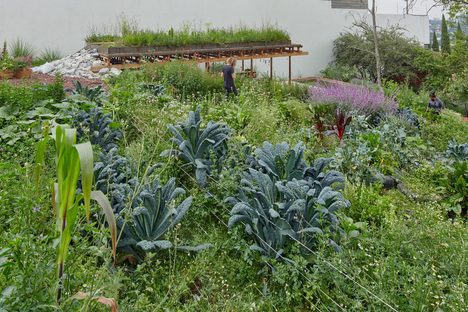 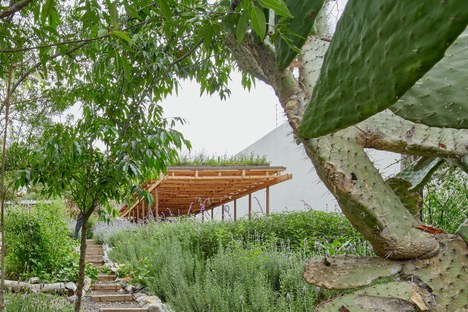 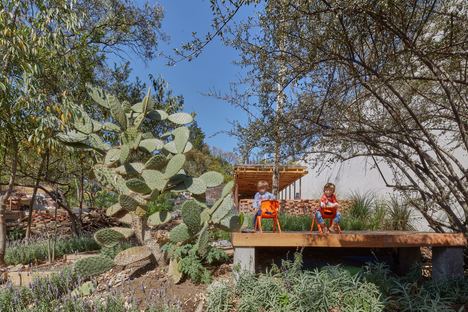 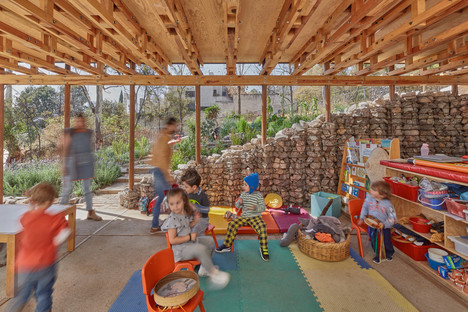 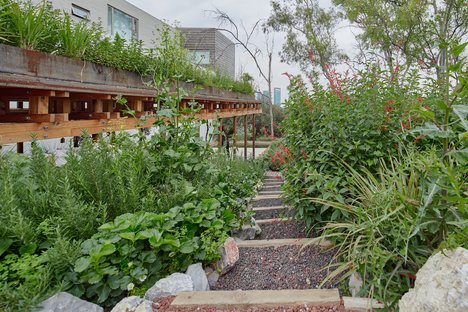 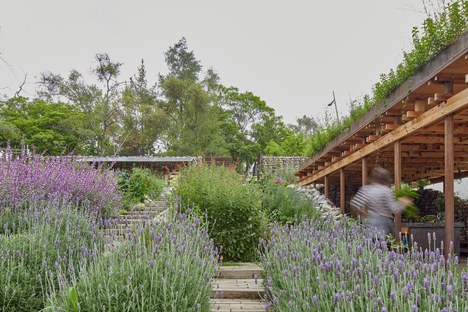 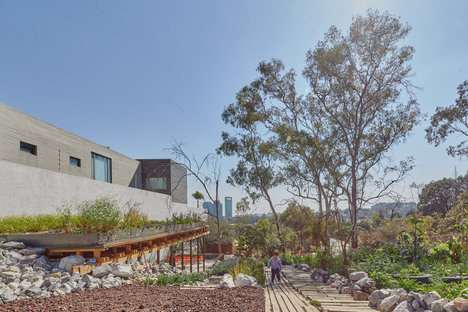 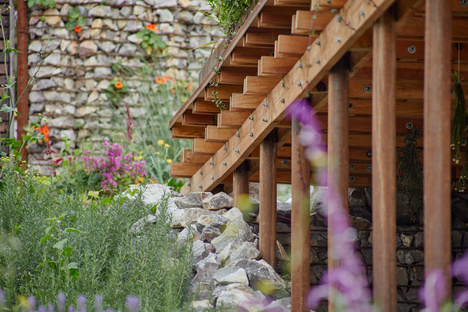 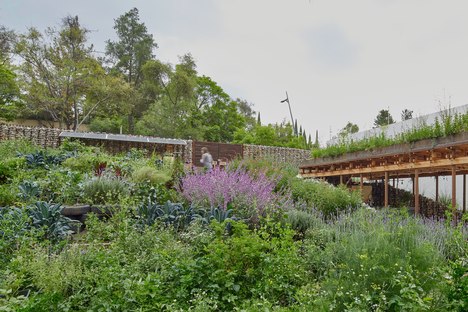 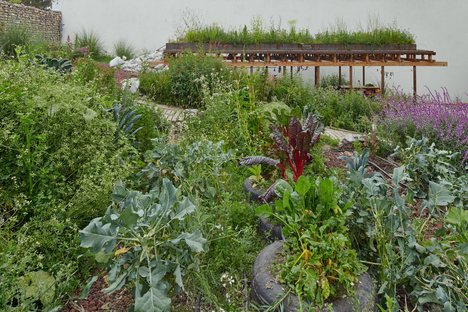 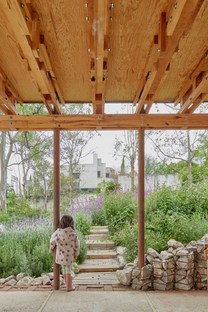 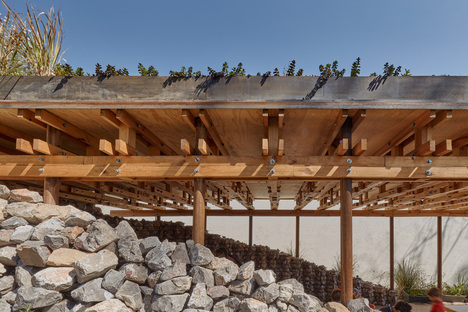