NEST Unit Urban Mining & Recycling (UMAR), where all the resources required to construct a building must be fully reusable, recyclable or compostable, according to lifecycle principles is sending out a clear message to the world of sustainable building. 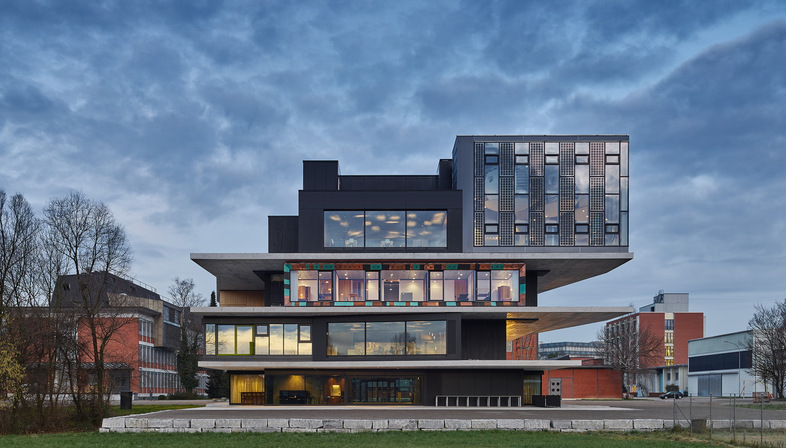 NEST Unit Urban Mining & Recycling (UMAR), where all the resources required to construct a building must be fully reusable, recyclable or compostable, according to lifecycle principles is sending out a clear message to the world of sustainable building.

We're seeing in the new year with an exemplary project of sustainability: NEST - Unit Urban Mining & Recycling (UMAR), where all the resources required to construct a building must be fully reusable, recyclable or compostable, according to lifecycle principles. This unit expands NEST (Next Evolution in Sustainable Building Technologies), the world’s first modular research and innovation building aimed at accelerating the innovation process in the construction industry. The building is owned by Empa (Swiss Federal Laboratories for Materials Science and Technology) and by Eawag (Swiss Federal Institute of Aquatic Science and Technology) and is located on the Empa campus in Dübendorf, 30 minutes from Zurich.
Everything is based around the premise that the continued growth of the global population and the depletion of resources required an urgent rethink in the building industry so we have to use less material to build for more people. So the idea of recycling plays a central role in the drive towards a more sustainable building industry: “The  materials that we utilize will not just be used and then disposed of; instead they will be extracted from their cycle and later returned to”, says Dirk E. Hebel, Director at the Chair of Sustainable Construction at KIT Karlsruhe and the Future Cities Laboratory at the Singapore-ETH Center who developed the concept with Felix Heisel, Head of Research at the same institutions, and Werner Sobek, Director of the Institute for Lightweight Structures and Conceptual Design at the University of Stuttgart and founder of the Werner Sobek Group.
The latest NEST unit called Urban Mining & Recycling systematically implements these ideas: the result is a housing unit whose structures and materials can be fully reused, recycled or composted after dismantling. The structure and large parts of the facade are made of untreated wood. The innovation here lies in the joinings, explains Felix Heisel from KIT. “All joinings can be easily reversed because, for instance, the materials are not glued together but rather tucked, folded, or screwed.” The used wood is also applied in such a way that an otherwise standard chemical coating is not necessary anymore, thus making purely type-sorted recycling or purely biological composting feasible
In addition to the wood, the edging of the facade is made of repurposed copper sheets that previously covered the roof of a hotel in Austria and sheets that have been manufactured from melted down, recycled copper.
The entire, seven-module unit was prefabricated and it took one working day, two cranes and a well-attuned team just one day to install it in the research building on the Empa campus in Dübendorf in November 2017, between the projecting platforms of NEST, the research and innovation building of Empa and Eawag in Dübendorf. The interiors were fitted out across the next few days, making the apartment ready to accommodate its first two tenants. This made it possible to give living in this kind of sustainable architecture a real test run, and they regularly discussed their everyday experiences with the researchers involved.
NEST Unit Urban Mining & Recycling is the implementation and demonstration of the lifecycle concept applied consistently to a real, lived-in building project, hoping to trigger a change in thinking in the construction industry, based on three premises: the temporary removal and borrowing of materials instead of permanent acquisition and disposal, maximum modularisation and prefabrication, potential for all materials and products to be extracted cleanly, separated out and sorted before being introduced back into their respective materials cycles.
An example of modular, sustainable architecture with a streamlined, clean and contemporary appeal to send a real message to the world of sustainable construction. 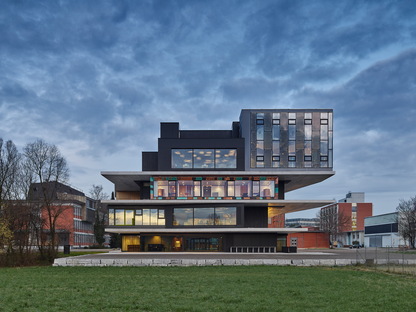 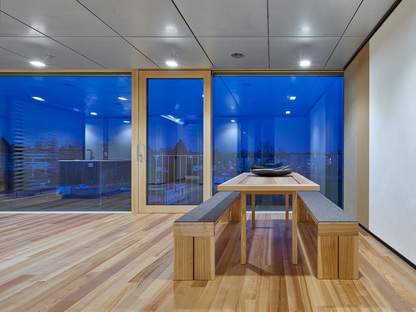 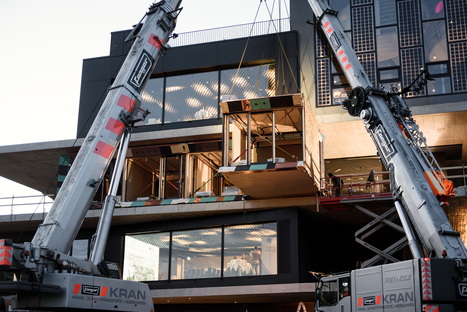