Across from an old stable in the centre of Soglio, in the canton of Graubünden, Armando Ruinelli of Ruinelli Associati Architetti had no doubts: the good condition of the existing building permitted a merger of old and new in the sign of a minimal architectural vocabulary underlining the craftsmanship of the details.

The structure of the 10 x 10 metre stable was preserved, particularly the cladding of stone pillars and the structure of the roof. The interior was emptied out, given new walls and two floors for a total habitable surface area of 135 square metres.

The studio’s choice of constructing new walls for new living spaces and renovating the stairway, integrating a chimney made by the old “compacted cement” technique, initially puzzled the workers, but the overall effect convinced everyone. The archaic material goes perfectly with the flooring in the entrance and the coarse grain of the concrete seats.

The wood used in the project is Swiss oak, while the walls are made of glass between pillars running all the way up to the ceiling in custom-made steel frames. In front of the windows are vertical strips of wood which can be manually oriented to adjust the amount of light coming into the building.A harmonious combination of the prevalent materials, compacted cement and solid oak, is the key theme in the interiors too. The kitchen furnishings are made of compacted cement with oiled oak work surfaces, and the same material is used for the bathtub and sink.

But this is not just an aesthetic choice: the architects wanted to create a harmony of old and new, using construction materials as their trump card to facilitate construction of the entire project. The building is located in the centre of town, on a lot measuring only 200 m2, and the fact that no crane was needed was an important advantage in construction.The renovated stable fits fluidly into its surroundings, picking up on traditional techniques and materials and paying homage to local craftsmanship.

The resulting home won two prizes in 2011: a gold medal in the “Homes” category at the Best Architect Awards for architects from the German-speaking regions of Switzerland and one of the publisher Callwey’s “Four houses of the year”. 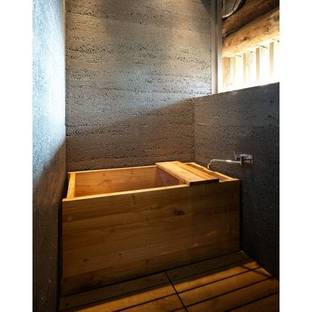 Gantenbein Winery – industrial architecture with innovative use of brick