Landscaping in the city, or creation of new living space

The MFO-Park in Oerlikon, Zurich, creates a link with the railway station and the residential district on one hand and the industrial zone on the other and provides residents with a place for recreational activities.

Oerlikon was an industrial suburb of Zurich until the 90s which has now been converted for other uses. What is now the park was the MFO machinery factory for over a century; once the factory had been dismantled, economic change generated an empty space in the fabric of the city. The urban development project converted the lot into a new attraction for the area. Burckhardt + Partner architects and the a landscape architecture studio Raderschall Landschaftarchitekten AG won an international competition for development of the area held in 1997. Their project, which was built in 2002, includes a particular weight-bearing structure scaled to cover the traces of the old industrial building, on which plants grow in this place where the local people can spend their leisure time. The result is a “container” with a double wall built with wires to support climbing plants, which in turn provide a backdrop for everyday use, favoured by the street furnishings, and for special events such as outdoor concerts, open-air cinemas in summer and other public events.

The space enclosed by the double wall contains the staircases and loggias leading to the roof of the building, a raised, equipped urban site with a view of the northern part of Zurich, establishing a visual link with the city for people climbing the stairs. Its particular location underlines and reveals to visitors the concept of belonging to the place.

The construction and goals of this contemporary project result in an architectural volume covered with a layer of plants, abounding in light and fragrance, for a great variety of uses and above all for restoring life to a central location in the neighbourhood. Ten years after its inauguration it has lost none of its charm and is appreciated by both neighbourhood residents and the people who work in the adjacent office buildings. An example of sustainable architecture for the community well worth noting, which has borne fruit over the past decade. 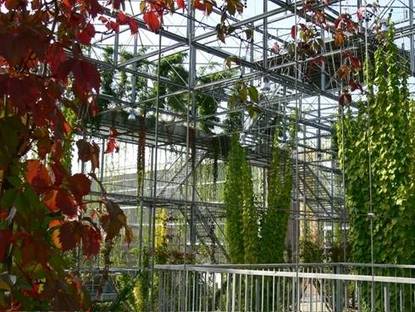