The Qaammat Pavilion, designed and built by architect Konstantin Ikonomidis from the Konstantin Arkitekter studio, in cooperation with UNESCO and the Qeqqata Municipality in Sarfannguit, Greenland, celebrates and promotes Inuit land, culture and traditional knowledge of the environment. The glass-brick shell structure is reminiscent of ice and blends into the landscape. 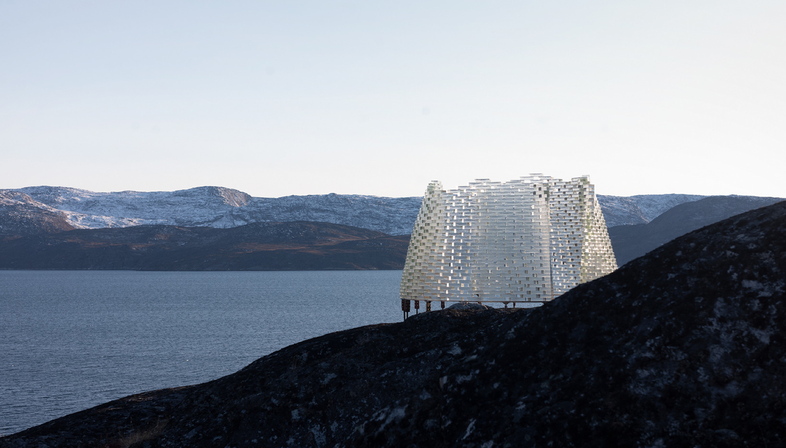 Narrating the culture of the inhabitants of a place through a construction, when in Greenland's culture indigenous architecture was originally ephemeral, consisting of elements such as igloos or tents, is by no means an easy task. However, this task did not frighten Konstantin Ikonomidis, a Swedish architect of Greek origin, when in 2019 he was commissioned by UNESCO to create a celebratory piece of architecture as a tribute to the local landscape, both cultural and physical, and to the important connection of the Inuit community to that landscape.
The Qaammat Pavilion is located in Sarfannguit, in West Greenland, in an area that stretches from Aasivissuit to Nipisat and which was declared a UNESCO World Heritage Site in 2018, the third site in Greenland to boast such recognition. The site where the small architecture is erected is characterised by the two fjords that meet at the eastern tip of Sarfannguit. The exact location of the pavilion in the hills, offering a breathtaking view of the sea and of the coastline, was carefully chosen by the local community, by site manager Paninnguaq Fleischer-Lyberth and by architect Konstantin Ikonomidis.
The creative design process draws inspiration from the moon and from the arctic light, in combination with the snow's reflections. Not surprisingly, the site-specific research carried out by Konstantin Ikonomidis was an important part of the design phase. Building on the experience of previous work and on his research on the theme of the home, the architect focused on his interest in integrating landscape, culture and human stories into the design. Konstantin Ikonomidis therefore carried out meetings, conversations and interviews with locals in order to "reflect these experiences, stories and myths poetically in the design of the pavilion", as we read in the press note.
Because what is at the heart of the architectural gesture is the non-tangible part of the design, namely the entire Inuit cultural substrate, which has been meticulously integrated into the work, including thanks to the collaboration with the Sisimiut Museum. From a technical point of view, the pavilion is anchored to the rocky ground, just like all the typical houses in the Sarfannguit settlement. A customised stainless steel bracket with a circular geometry is attached to the top of the metal poles, which vary in length depending on the terrain. The curved walls with which the architect fills the space between the poles have been constructed of glass blocks. This gesture forms a linear path open at both ends that serves as the entrance to the pavilion. Transparency is the most distinctive feature of the structure: the play of transparencies, the scale and weight of the blocks give the intervention a magical – if not surreal – atmosphere. As the architect explains, "The Qaammat pavilion can simultaneously alter the viewer's perspective, merge and even vanish into the surrounding topography."
The Qaammat installation becomes a landmark and a gathering and dissemination point along the route between two locations, where locals, Inuit and visitors to the village can experience the beautiful surroundings of the World Heritage site. Konstantin Ikonomidis conceived his work as a poetic and aesthetic object, but above all "as a symbolic gesture acknowledging the natural site and rich history, the distinctiveness of the Greenlandic culture". The work, focused on understanding rather than reforming local tradition with innovative materials such as glass bricks, was awarded the prestigious A+Awards 2022. 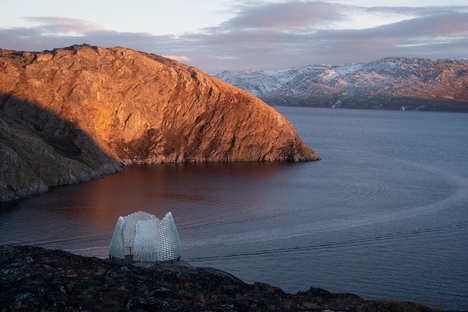 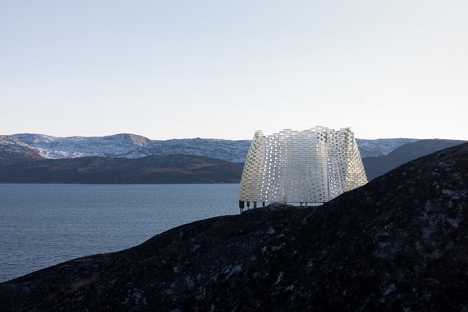 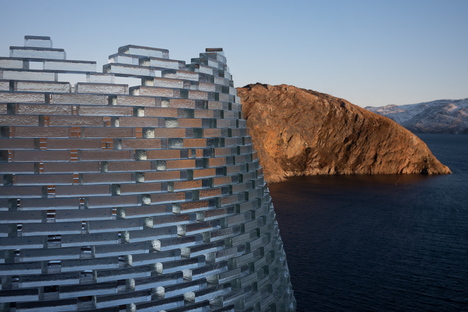 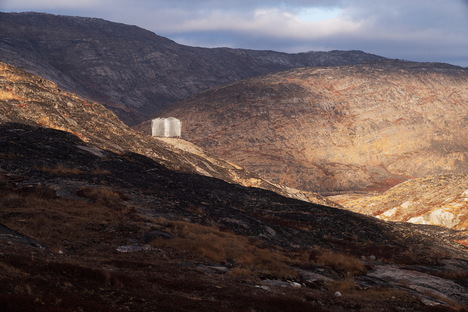 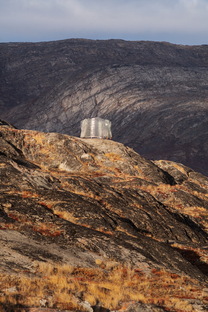 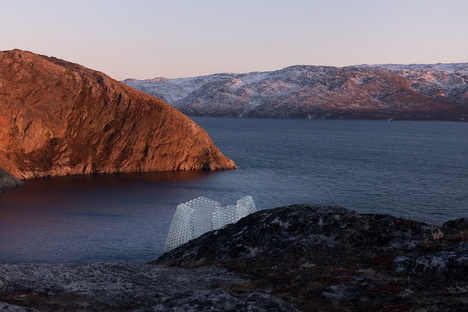 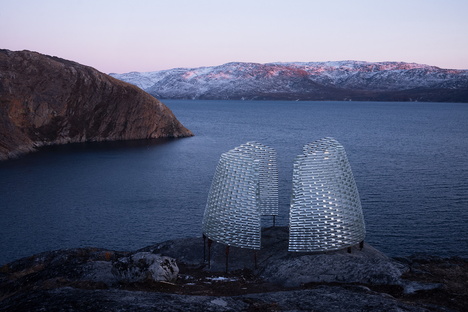 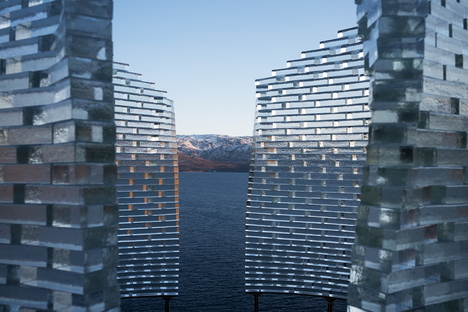 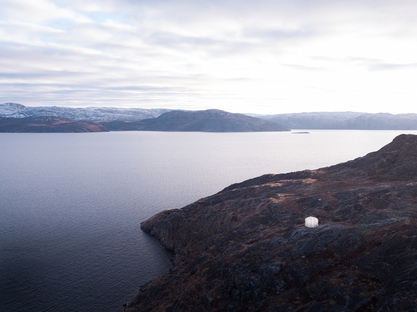 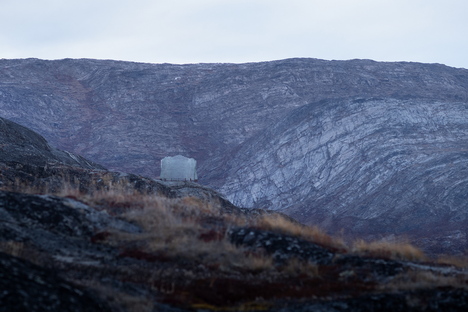 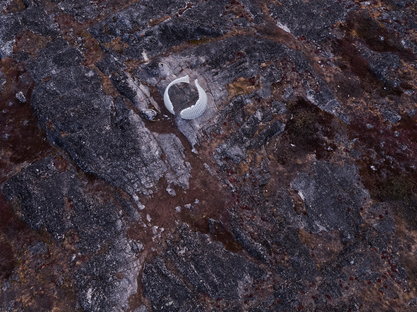 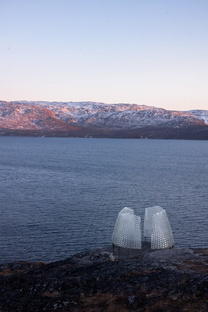 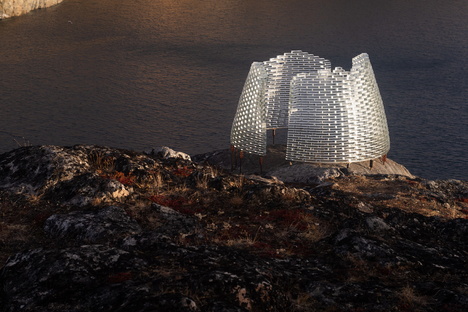 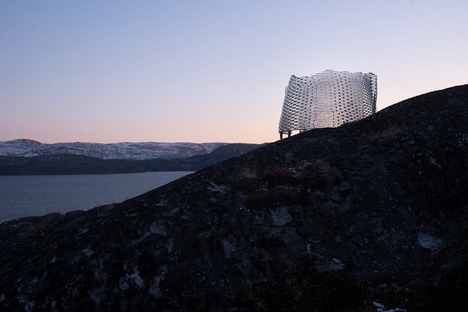 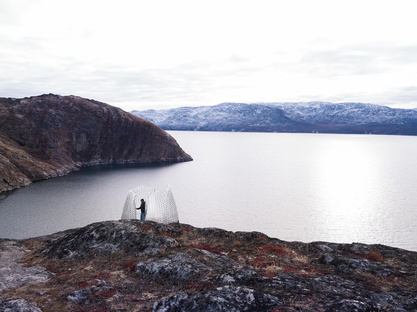 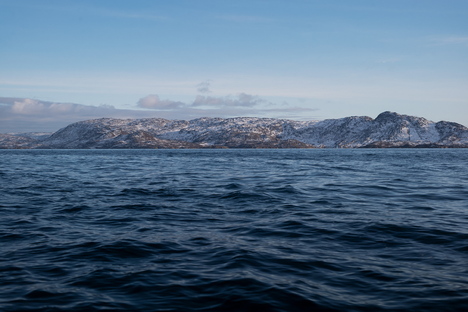