Jacques Ferrier Architecture and Sensual City Studio have together turned an office building with parking lots into an opportunity to radically shake up the surrounding urban neighbourhood of Xujiahui in Shanghai. 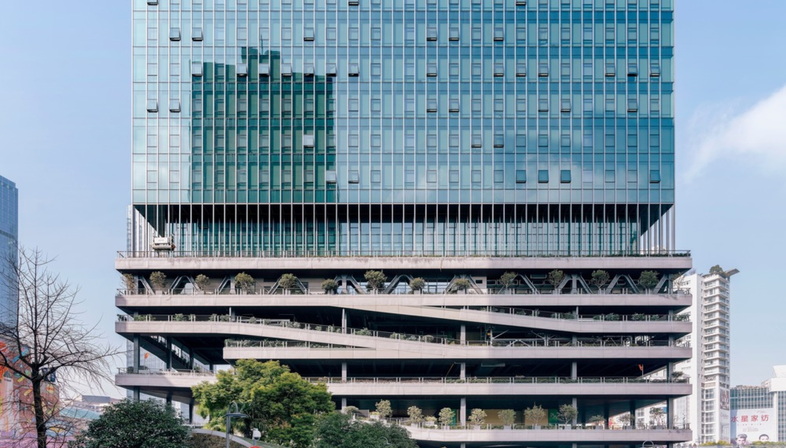 Jacques Ferrier Architecture and Sensual City Studio have together turned an office building with parking lots into an opportunity to radically shake up the surrounding urban neighbourhood of Xujiahui in Shanghai.


A real urban oasis is one way of describing the T20 project completed by Jacques Ferrier Architecture based in Paris, Lisbon and Shanghai with the designers from Sensual City Studio on one of Shanghai’s busiest intersections. JFA is an international architecture practice specialising in urban planning and high-quality, contemporary architecture founded in 1993 by Jacques Ferrier and one of the first specialists in sustainability in Paris. Sensual City Studio was created by Pauline Marchetti and Jacques Ferrier Architecture in 2010 and sees each urban situation as an opportunity to explore a conceptual framework based on the way that people inhabit the city of tomorrow. The first part of their approach, prior to designing any forms at all, is to create an environment that permits diversity and changing uses and to incorporate these into a specific geography and historical context.
These set the underlying foundations for T20, a radical, daring transformation of an existing building that has created added value for the whole district of Xujiahui.
The project not only explored the potential of the building - an office building and car park - it sought to create a catalyst for a more extensive environment by constructing pedestrian connections, planted walkways and bridges over the transport interchange as an extension of the building, thereby renewing and improving local infrastructure and engagement with other points of interest in the city.
The project includes two levels of commercial space underground, one of which is connected to the Metro City building by an underground gallery. Floors 1 and 2 house several hundred square metres of community spaces. Floors 3 to 7 house the public car park, which unfolds in the form of a continuous spiral, serving the offices and businesses of the district. The 8th and 9th floors are shared office space arranged around a large raised garden, and house a visitor reception area, cafeteria, meeting rooms, auditorium and spaces for relaxation and conviviality.  Levels 10 to 15 have been developed as efficient and user-friendly office floors.  The top two floors are home to the cultural centre, space that seemingly "floats" on the skyline of the district.
As a piece of architecture, T20 expresses the movement and dynamism inherent in the site: its circulation and activation through human use, across the bridges that connect to the city and at the ground and first-floor level where public facilities and shops are located. The car park has been turned from a typical no-man’s land into a lush urban oasis for the city, with the insertion of an extraordinary “hanging garden” that is visible from key public spaces.
This combined approach by Jacques Ferrier Architecture and Sensual City Studio has brought nature into even this most densely populated area of Shanghai. The suspended gardens and plantings throughout the scheme will help to counteract some of the inevitable pollution in the area. Balancing dynamic movement and respite, the building reintroduces therapeutic nature into the urban condition by offering a garden to the city in this intriguing layered approach to city architecture. 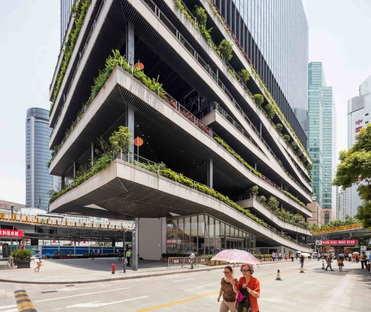 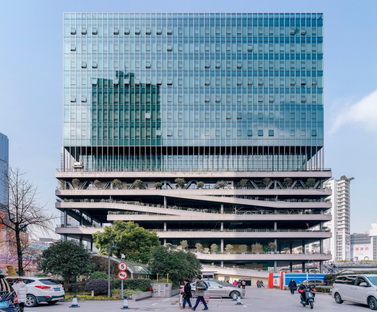 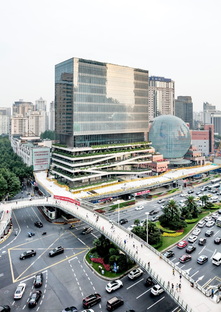 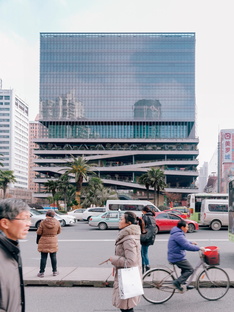 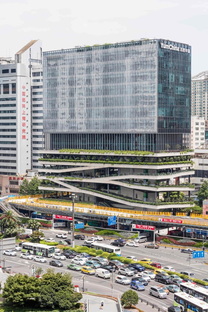 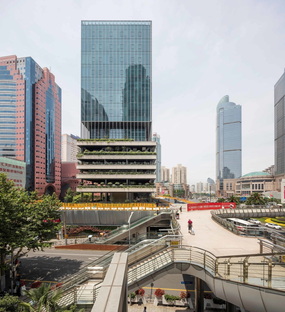 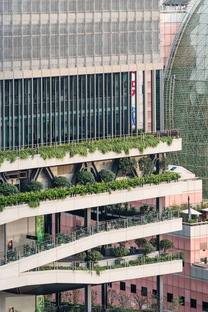 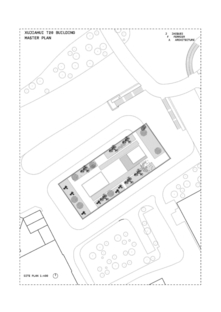 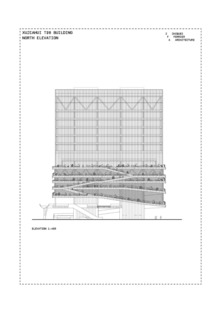 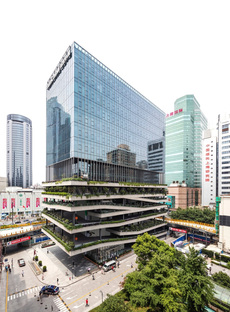