The Spanish architecture firm estudioHerreros has transformed the artwork by Antoni Muntadas called Palabras - Words - into a three-dimensional experience through a new installation at the El País exhibition space during the 2020 edition of ARCOmadrid. 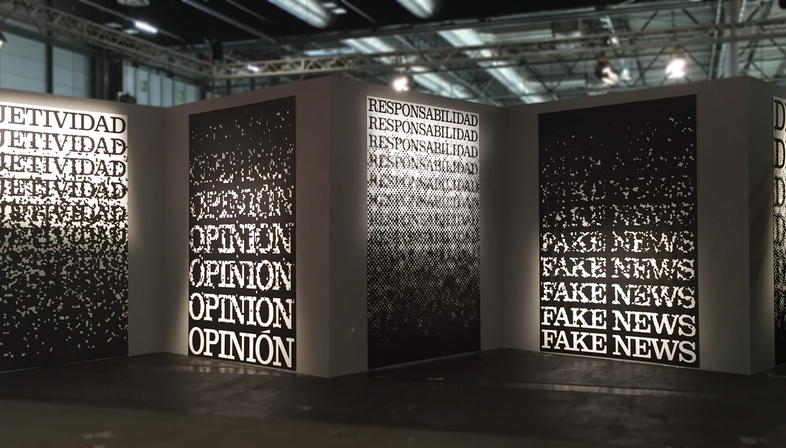 We are familiar with the designers of estudioHerreros due to their close relationship with the world of art. Their contributions include the new  Munch Museum in Oslo that will open this year, the makeover of the public spaces in the MALBA Museum in Buenos Aires, the CarrerasMugica art gallery in Bilbao, the SOLO Museum and the refurbishment of the exhibition rooms at the Reina Sofía Museum in Madrid, as well as a series of projects for galleries, exhibitions, art fairs and art studios of artists like Luis Gordillo.
Added to all of that is their work at ARCOmadrid, Madrid’s International Contemporary Art Fair. ARCO is considered to be one of the most important modern art events on the international circuit and it is held every February in the Spanish capital. estudioHerreros and ARCOmadrid go way back to 2009 when the architects were responsible for setting up the fair and designing the VIP rooms of three editions. Antoni Muntadas and Juan Herreros have collaborated for even longer - about 15 years. Muntadas, a multidisciplinary installation and media artist and Herreros, founder and partner of estudioHerreros have held workshops and conferences together and have jointly published several conversations with third parties in the public space.
In his artwork called Palabras..., Antoni Muntadas explores the written word’s losing battle against the image. The project by Muntadas is a ‘work in progress’ about the power of words, their meaning and their transformation into what are sometimes watered-down images, while we end up not even knowing what they really mean. Nowadays, the use and abuse of certain words have brought about a decline in their social value and the artist’s project triggers a reflection about language by transforming selected words into images. The procedure refers to decisions based on the ontology, semiotics, typesetting and translation of these terms, showcasing the erosion of their meaning in a visual breakdown.
Invited by El País for ARCOmadrid 2020, Muntadas came up with a version of his project that takes into account the context and includes terms that he hadn’t used before in the Words... project. Terms that refer directly to the media, like Opinion, Objectivity, Fake News, Responsibility. The number of words depends on the exhibition space available. At ARCOmadrid, he also used the same typeset as El Paìs, whose logo has been a kind of icon in the collective unconscious of the printed word since the newspaper was founded in 1976.
The artist worked with the architect Juan Herreros to design and build a temporary structure to accommodate Palabras..., creating a specific display for the occasion. Juan Herreros, who founded estudioHerreros and runs it with Jens Richter has, in this case, transformed the artwork into a three-dimensional experience: the words were transferred onto canvases hung directly onto the architectural partitions. By moving around the zigzagged wall, visitors are treated to a sequence of perceptions leading to the discovery, overlap and contrast of the images/words, and accentuating their meaning, all through the geometry of the proposal.
The width of the support and its carefully selected grey background - the grey of the dihedral walls forming the space is the same as the grey of the polished concrete floor to make it as neutral as possible, and the grey of the lighter, freestanding exhibition partition contrasts with the black and white of the artwork - as well as the formalization filled with urban allusions refer to the materials of the city and the industrial feel of the pavilion housing the installation.  Palabras… is the output of art and architecture working side-by-side and this boosts the impact of the work on exhibition through the visitor’s spatial experience. 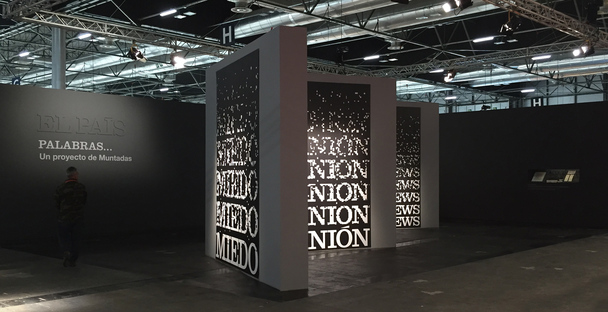 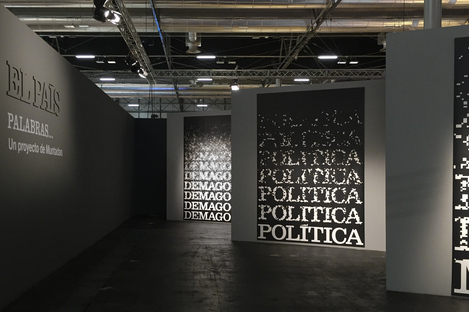 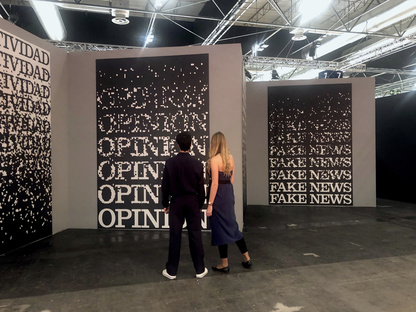 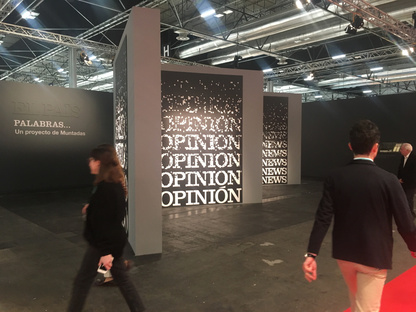 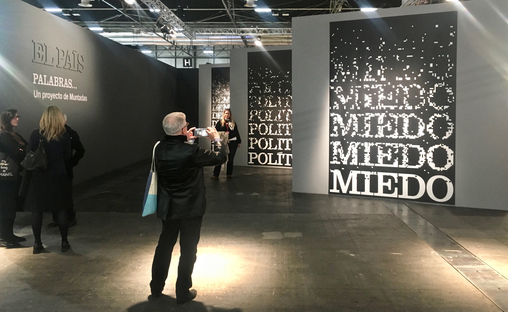 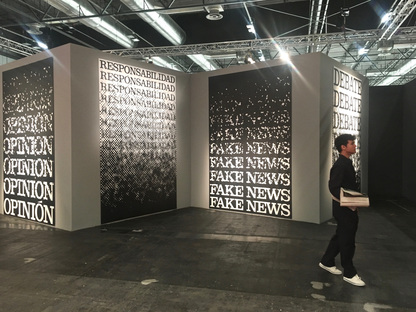 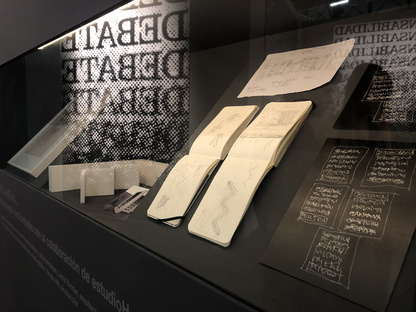 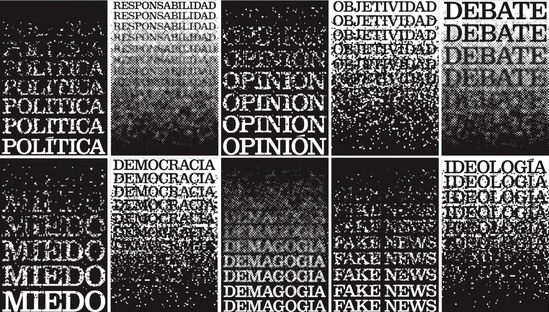