The Amos primary school, designed by the Czech studio SOA architekti is the first school - and one of the Czech Republic’s few public buildings - designed to passive energy standards. Taking its cue from the region’s vernacular architecture, this building just outside Prague doubles as a community centre for the village of Psáry. 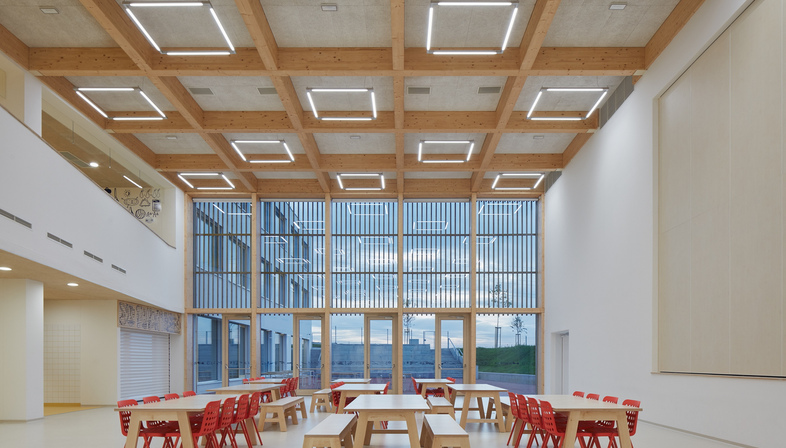 SOA architekti has designed an inspiring elementary school for students from the village of Psáry and the neighbouring hamlet of Dolní Jirčany, 18 km southwest of Prague. Without disturbing the countryside of this district with about 4,000 residents, the designers have completed an architectural showpiece.
The Amos elementary school stands on a gently sloping site with a cluster of buildings of different levels, on an urban axis connecting it to the village square of Psáry. The complex also features a continuing education hub and a community centre, making for an essential regional complex; the public library next door adds to the school’s community vibe.
Seen from above, the campus is a loose cluster of four, two-storey buildings with pitched roofs, informed by the plain vernacular architecture of a group of farm buildings. However, an understated, single-storey volume at its core houses the canteen and gym and subtly connects the other parts. In contrast with the plain white facade of the other buildings, this central structure is clad in distinctively profiled vertical larch slats, also used on the windows to channel the light according to need.
This is a double-height multipurpose area, which transitions into the entrance foyer and can be turned into a formal performance venue with a stage when the partition separating it from the small gym is opened. The open terrace off the canteen connects with a grassy slope and a playground, giving the school more space for interaction, and providing an outdoor teaching extension of the ground floor workshops.
SOA architekti designed the school interiors as a “learning landscape”, fluid, light-filled spaces, with naturally defined levels of privacy. The learning areas in the shed-like volumes are arranged in clusters around wide staircases; each group has its own colour palette and is formed of two or three classrooms and one central hall. These small, visually connected clusters have walls with writable and magnetic surfaces so the children can also have a say in their learning environment.
Alongside the playful visual graphics based on children’s drawings, the abundant wood of the flat-roof trusses of the lobby and canteen, wall panelling and built-in furniture, windowsills and facade cladding gives the campus a friendly feel and a domestic warmth.
SOA architekti designed the whole complex to passive building standards, one of the few public buildings and the first school architecture in the Czech Republic to meet the standard. The underfloor heating is provided by heat pumps, combined with gas boilers to cover peak hours. A pressure-controlled ventilation system assures plenty of fresh air, with passive heat recovery of 77 per cent efficiency. The units are decentralized on the roofs and in the attics of each building and ventilation is automatically controlled according to the CO2 levels in the classrooms. In summer, the same system is used to cool down the school at night to reduce daytime use. Rainwater is harvested for irrigation and flushing.
The Amos elementary school by Czech-architecture studio SOA architekti is all set for the new school year after the summer holidays, with an attractive aesthetic guided by the context, and a sustainable design that is also safe! 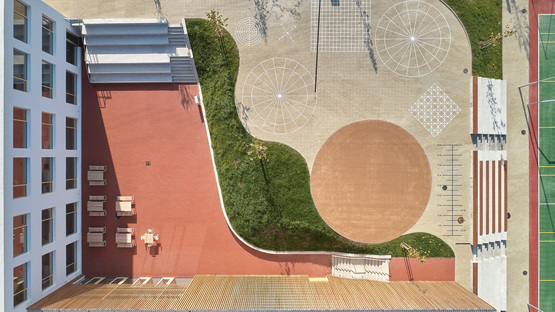 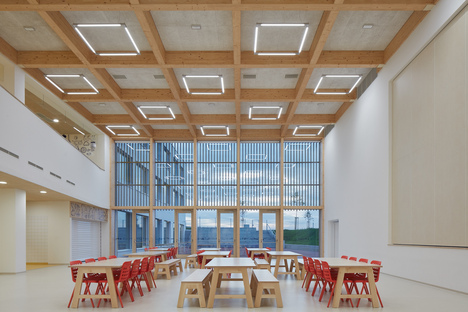 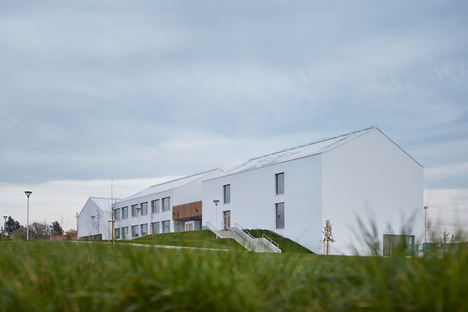 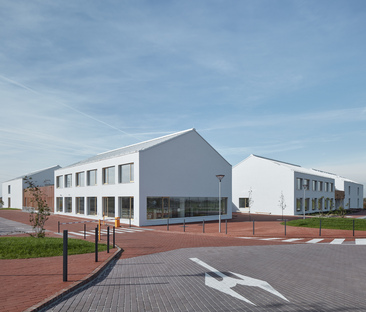 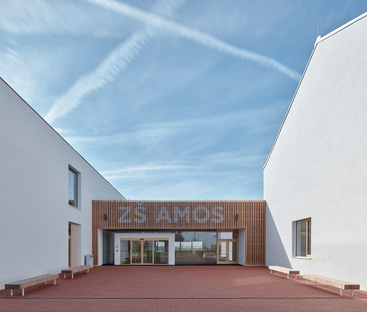 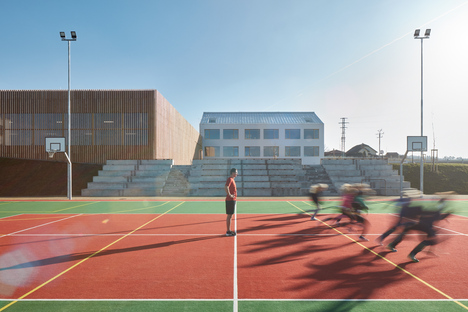 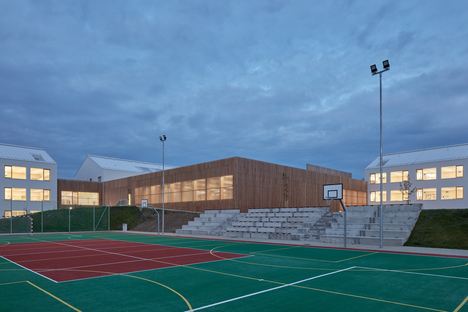 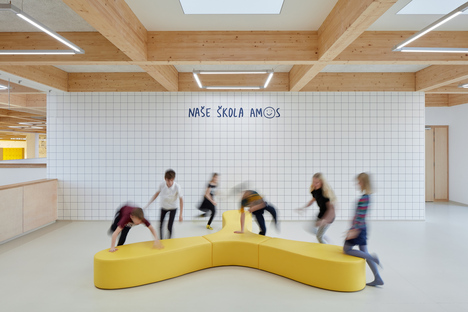 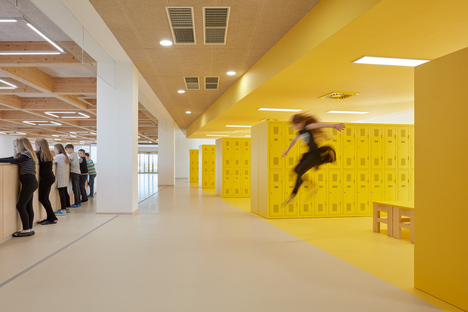 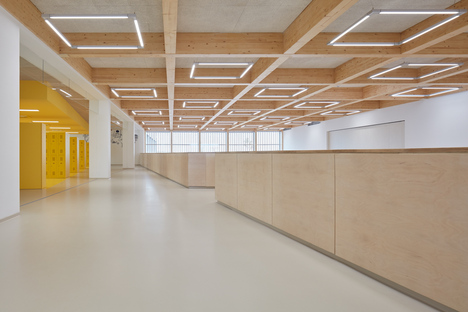 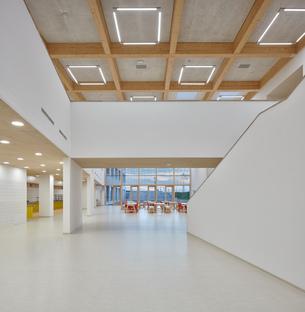 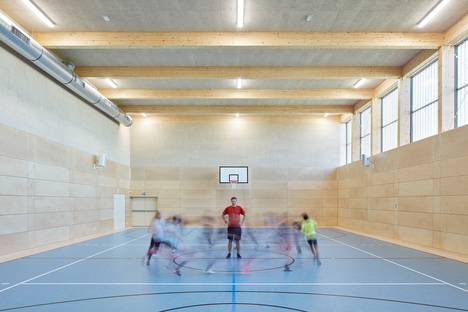 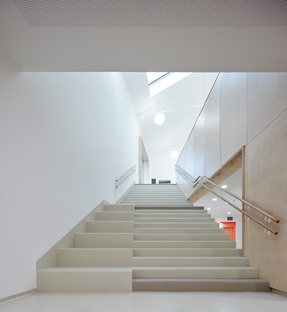 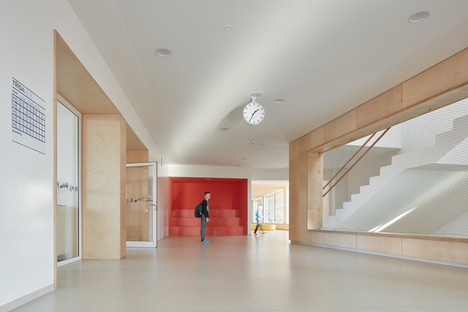 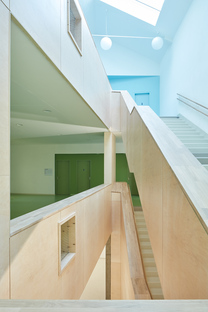 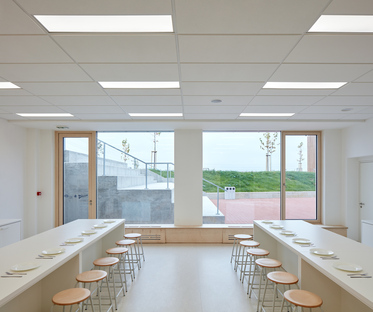 A school like a town centre, Gallatin High School

A school like a town centre, Gallatin High School