The Continuous Plate House 2.0 by the Japanese architects, Ryumei Fujiki and Yukiko Sato from F.A.D.S. Design in Fukui, Japan is a creative project that revisits the spatial relations and materials of the original design, featuring a reinforced concrete slab that folds up and over the house.

One of the main requirements of the original project - Continuous Plate House 1.0 - was a design that would efficiently withstand heavy snowfall. Fukui has a humid subtropical climate with high precipitation throughout the year, and particularly heavy falls in December and January. The house was initially built in 1999, and at the time, research suggested that prevailing winds would stop the snow from settling on the roof. This made the architects from F.A.D.S. Design opt for a flat roof without a parapet. What they came up with was, in fact, a continuous reinforced concrete folded plate, which is, to all intents and purposes, the framework of the house. The way this plate with rounded edges gently wraps around the house is like a warm embrace, and it acts as both the floor of the top level and the roof. It also gave the project its name - The Continuous Plate House - now in its 2.0 iteration with a makeover of the downstairs interiors.
Ryumei Fujiki and Yukiko Sato used the strong materiality of the original building - the continuous reinforced concrete folded plate, as well as the rectangular concrete box - as the basis for their refurbishment. The outer surface of the box is finished with concrete cast in cedar board formwork, providing it with an external wooden texture, so they decided to line the interior of this box with wood, further strengthening the design concept.
The client brief was to convert the existing kitchen area, which included a breakfast nook and pantry, into more of a multipurpose, cosy family kitchen. In other words, the idea was to overhaul the existing spatial division to create a large, shared open space and connect it more efficiently with the living area and garden.
The first thing the architects did was to knock down the partitions in the area to define the new layout and give the whole kitchen area a warmer, friendlier feel. They took this warmth to the next level by cladding all the walls with cross-laminate timber (CLT). This light, sustainable material is informed by the formwork of the concrete box, and it is the perfect foil for the texture of the exposed concrete walls in the other areas.
F.A.D.S. Design also revamped the kitchen itself, replacing the wall-mounted sink with a central island unit, bringing it into our decade, where the kitchen is seen as a family room, where everyone can spend time together.
With the Continuous Plate House 2.0, F.A.D.S. Design has demonstrated that it is possible to reinterpret a standout structural idea even two decades down the track, without being required to make drastic changes. Here, instead, they opted for style and sustainability. Because the most environmentally-friendly home is one that is not a new build.
Christiane Bürklein 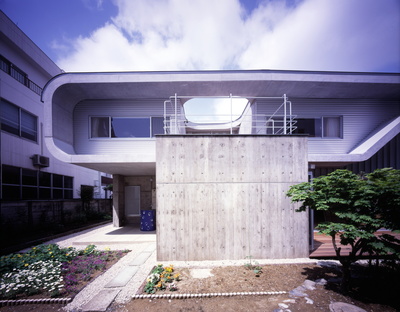