Paul Michael Davis Architects has designed an extension to a house built in the 1950s. The project involved incorporating two shipping containers into the home, adapting them to expand the space necessary for a family with 3 children. Their solution made the available space bigger and at the same time connected with local history. 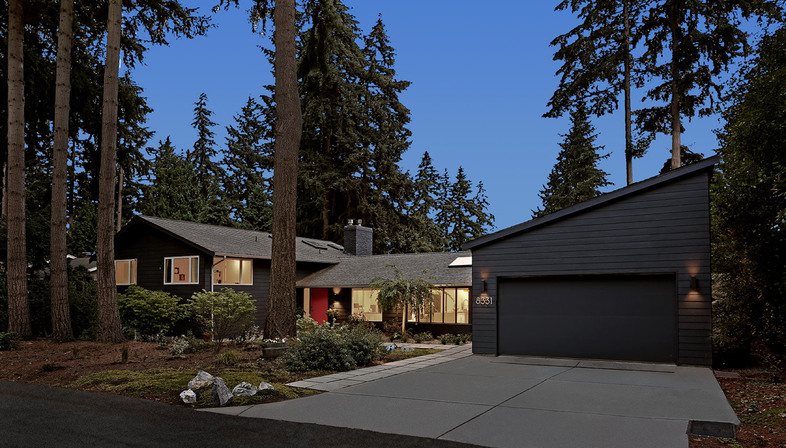 One of the big happenings in residential architecture today is making over a home to meet the client’s changing needs, also because many owners prefer to invest in their present home than starting from scratch with a new build.
One of these owners is the Wyss family originally from Switzerland, with their existing ho-hum house in a traditional neighbourhood of Mercer Island, a city in King County, Washington, United States, located on an island of the same name in the southern portion of Lake Washington. The owners approached Paul Michael Davis Architects, asking for something bold, unusual, and adventurous to add enough space for their three growing, rambunctious boys. They wanted it to fit into the style of the existing traditional neighbourhood, and integrate new, contemporary elements at the same time. They also wanted the remodel to reflect the unique history and development of the Seattle area and the Pacific Northwest, which include three key themes: the stunning nature with vast untouched forests; Seattle as a centre for global trade and a gateway to the Pacific and Asia; the region as a technology hub with hi-tech companies. Added to these themes were the international roots of the Wyss family from Basel, Switzerland, and they really loved the idea of repurposing shipping containers.
Paul Michael Davis Architects found lots of great examples of buildings made entirely from shipping containers. But in this case, it was different because most of the existing house was going to stay in place, and it seemed like the wrong move to plonk down a big stack of shipping containers in a neighbourhood with such a clear vernacular language.
So the firm opted to use the containers as if they had been discovered, almost like artworks. PMDA designed a simple rectangular volume on the west side of the house to create an informal entry courtyard and, more importantly, serve as a neutral container for the containers. The new addition has a garage on the street side, and a large multi-purpose space, which serves a variety of purposes, mainly as a communal area that connects the different parts of the house with an open plan living and kitchen area in the centre.
What looks really simple in the photographs was actually anything but. Incorporating the two containers into the home required all the experience of the construction team, particularly to weld together 3 shipping container doors and putting them on a 9.14-metre-long sliding track. Now that the Wyss has moved back in, the shipping containers act as both a background and a functional necessity for everyday life—the giant sliding door can divide the living space into two when sound or social separation is needed. The indoor container houses a small bathroom, mudroom and laundry that get daily use. And the outdoor container is ready to be a work from home retreat, not to be sneezed at in the middle of this pandemic, when the standing order is to work from home.
With the Wyss Container House, Paul Michael Davis Architects have crafted a contemporary makeover that has expanded the existing house and given it real standout character while respecting the context around it. 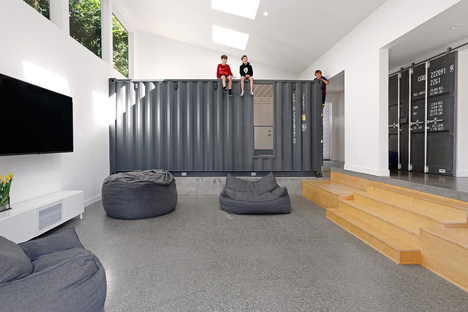 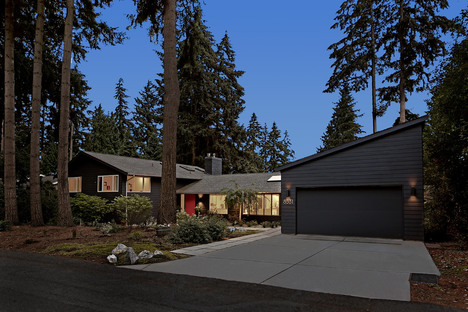 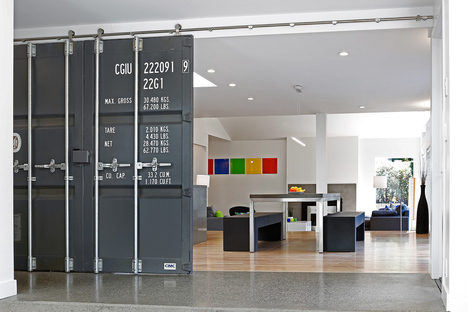 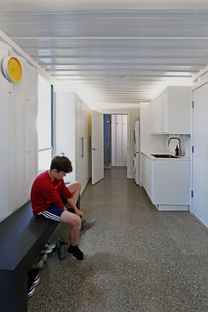 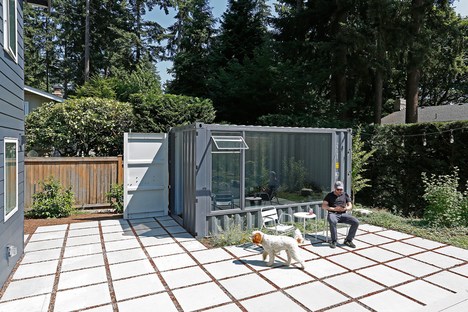 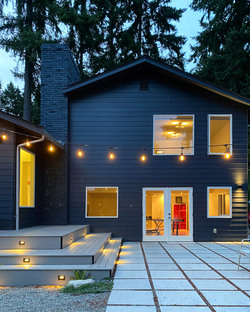 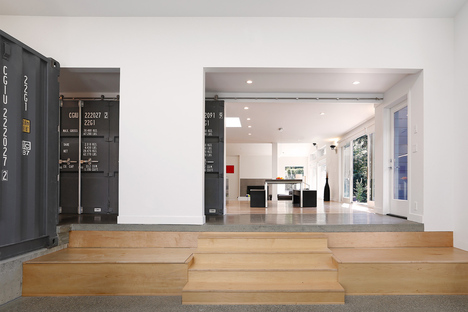 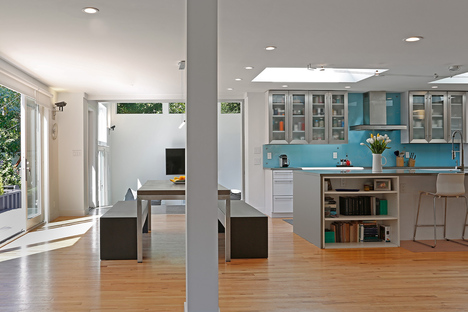 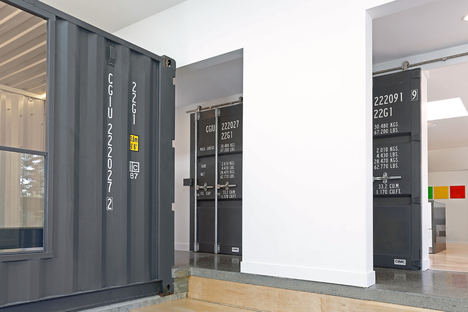 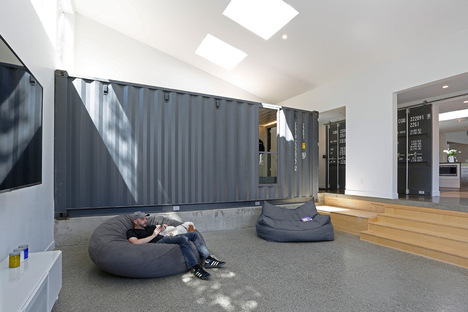 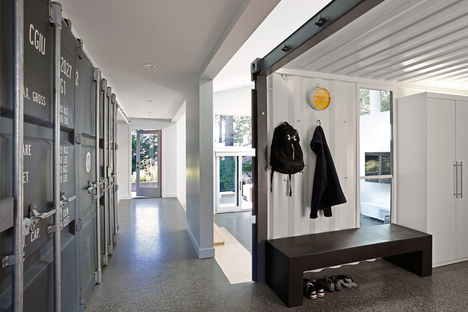 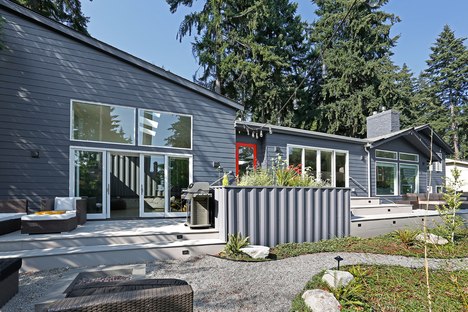 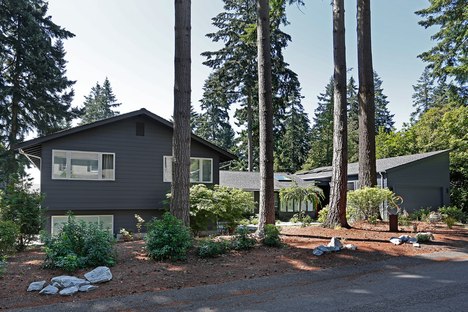 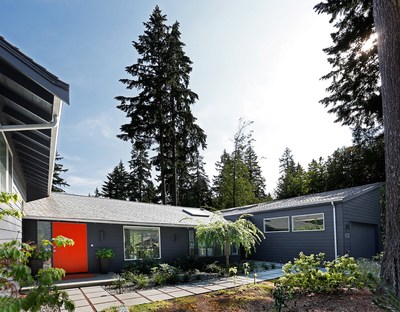 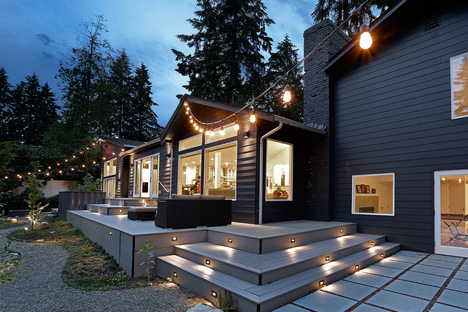