Casa E by Gabriel Montañés Arquitecto is a streamlined, geometric house on the island of Minorca. The design approach favours a flexible use of the house that gently fits into the Mediterranean landscape. 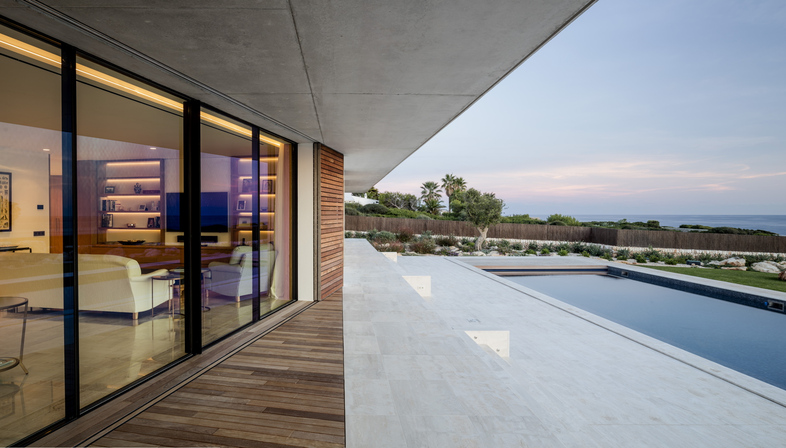 Minorca is the most low-key of the Balearic Islands and seems to have very quickly learnt to avoid the excesses and mistakes made on the other islands nearby - Majorca in particular - when it comes to tourism. Indeed, UNESCO declared the island of Minorca a biosphere reserve already 26 years ago, on 8 October 1993 in recognition of the high level of compatibility between the development of economic activities, the consumption of resources, and the conservation of heritage and landscapes on the island, a practice still maintained today at an exceptional level. Minorca is an intensely humanised territory, with an extremely rich tradition of rural landscapes. The main characteristic of the Minorca Biosphere Reserve is the diversity characteristic of nearly all Mediterranean island ecosystems. The most notable habitats are the gullies, caves, wetlands made up of ponds, lagoons and marshes, dune systems, coasts and islets.  Some 220 species of birds, and 1000 species of plants (60 of which are endemic) have been recorded.
This forms the backdrop to Casa E, a house designed by the Gabriel Montañés who mainly works on the island of Minorca, where his studio is based. In the words of the designer: “We combine a sense of knowing that we have to change the landscape while always wanting to leave a minimum trace of it.  That’s why we select projects that we believe can maintain the beauty of this amazing island.” Casa E meets the criteria and came about after the firm won the contract in a tender.
The architects based their proposal around the shape of the site - long and narrow. And the end result is a project with rather radical dimensions: 42m long x 3m high. The house actually contains two units on the same level, separated by a patio whose main function is to act as a breezeway, using nature to improve the comfort of the homes. Adapting to the plot measurements, the long, straight façade allowed the architects to distribute the whole main layout to the south, leaving the north side for bathrooms and with minimum openings. Even with large windows overlooking the sea, the privacy of the occupants and the interior lighting and engagement with the outdoors can be managed by the sliding wooden shutters that are a characteristic of the home’s overall appearance.
The floor plan allows for a flexible distribution inside the building. To minimise the visual impact of the home in the surrounding environment, the floor level has been lowered, and a slanted concrete roof slab with a changing section on the north-south axis was created.  The swimming pool has been sunk at an even lower level, acting as the connection between the house and the garden, which, in turn, will gradually turn into a Mediterranean landscape with no water consumption.
Speaking of water, all the rain that falls on the roof of the building is harvested, collected in a 40-tonne water tank located at the level of the large basement that occupies 50% of the building and which is accessed by a ramp at the back.
The facades on the ground floor feature the colour white, concrete, wooden lattices and glazing, while below the height of 0.0 m, the typically Mediterranean drywall texture is the protagonist.
Casa E by Gabriel Montañés Arquitecto is a streamlined, clean architecture that is also environmentally sensitive, where the design is not only an end in itself but responds to an attentive, thoughtful approach, matching the love that these architects have for the island of Minorca. 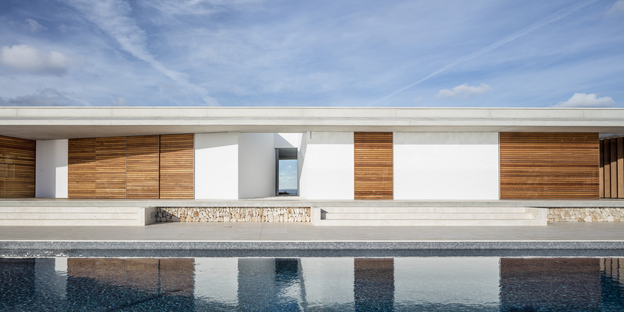 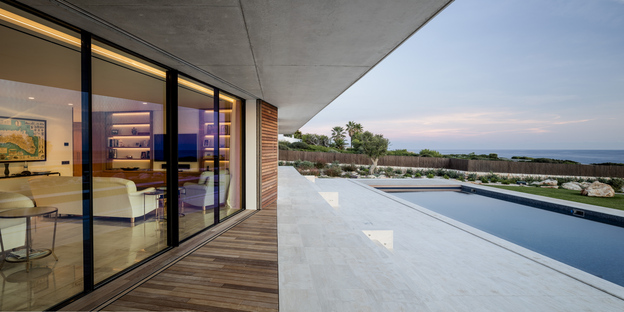 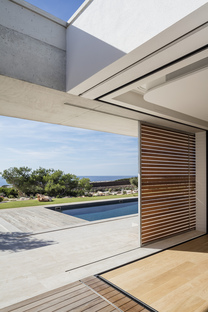 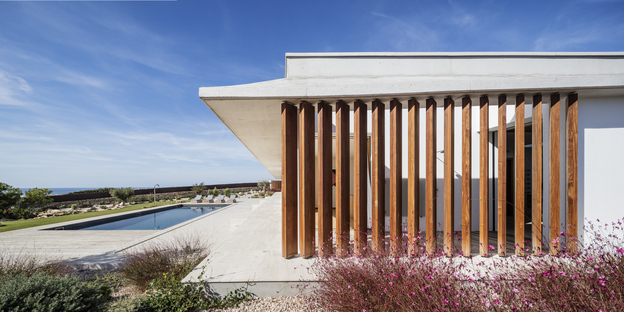 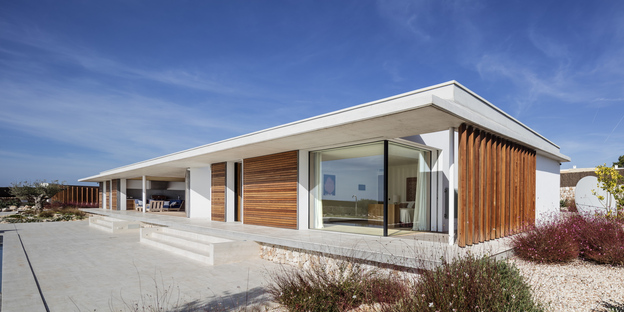 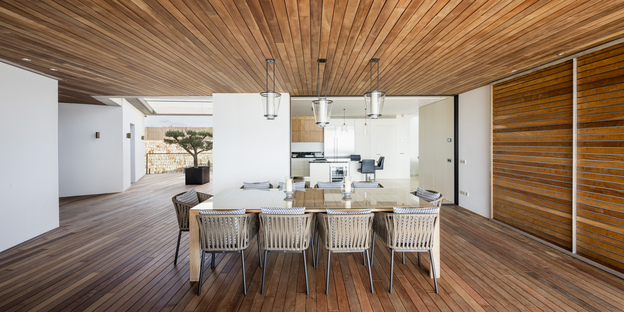 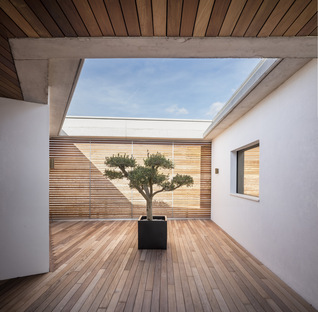 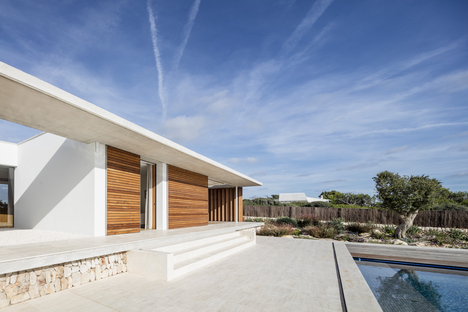 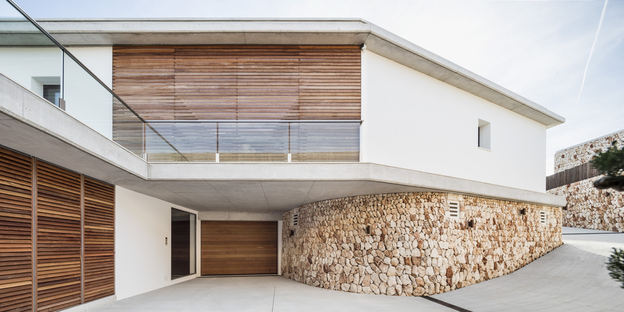 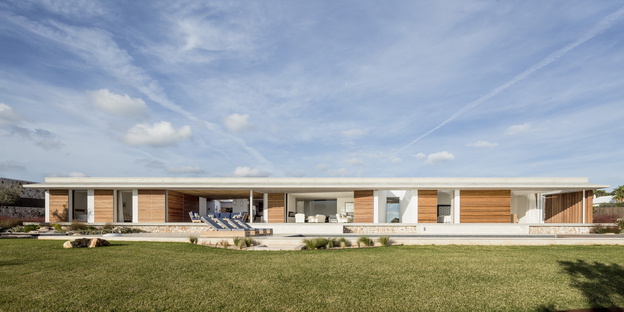 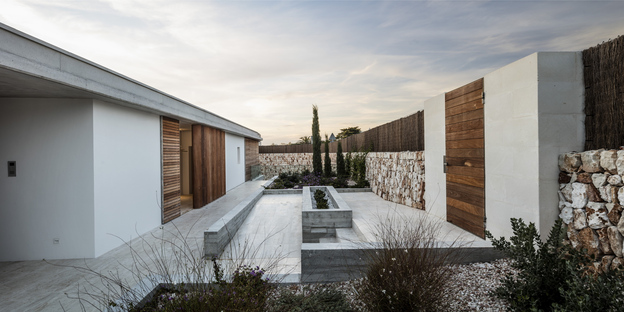 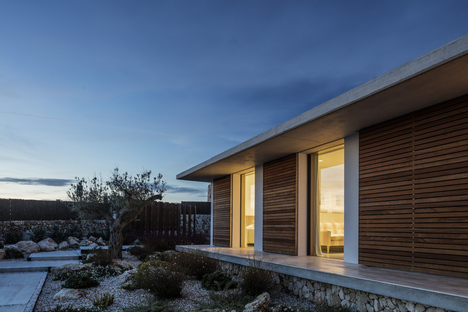 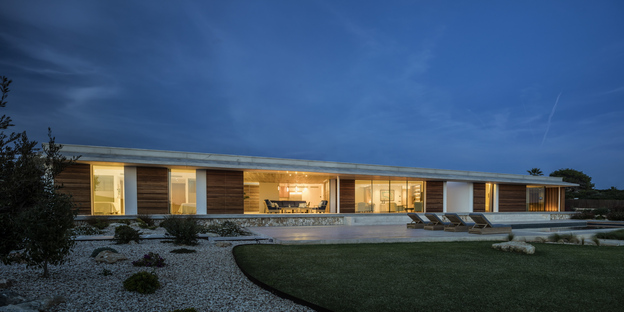