Snail Baby Growth Center, designed by Chinese studio TOWODesign in Shanghai, is an environment for users with special needs. Despite a limited budget, the designers have created a space with a warm and welcoming atmosphere. 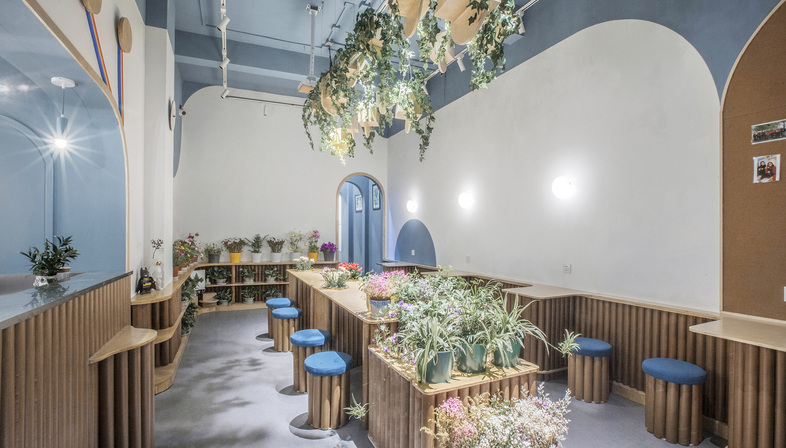 The snail is the symbol of slowness, and many actions often require slowness to achieve the desired result. Some movements boast the adjective "slow," such as Slow Food and Slow Tourism, to name a few, but even in healthcare, haste is bad advice. So it is no coincidence that the latest project by Chinese studio TOWODesign is called the Snail Baby Growth Center and is all about the symbol of the slow-moving snail.
With a total surface area of 135 square metres, this new center is located in Shanghai's Songjiang district. Set up on the initiative of a non-profit association to "care for disadvantaged groups, reduce poverty and promote social harmony", it was built inside an existing building, occupying the renovated ground and first floors.
The Snail Baby Growth Centre is a place that provides learning, communication, rehabilitation and employment opportunities for people with mental disabilities. The work carried out within the centre focuses on cultivating flowers and plants, as research has shown the beneficial effect of this type of work on cognitive rehabilitation and mental health care.
Due to the public nature of the project, the entire process, from design to production to construction, was carried out thanks to donations. Therefore, the designers needed to keep costs down without sacrificing quality design to support the therapists in their work and thus help the patients. For this reason, the creative minds at TOWOdesign opted for an inexpensive and readily available material such as paper, or rather sturdy, environmentally friendly cardboard tubes, which are attached to the furniture and used as decorations. In fact, thanks to their lightness and versatility, these can be easily transformed to meet the various functional needs best, here divided into different spaces, from the relaxation area to the classrooms.
But in such formal research there is a gem to be noted: the three snails adorning the entrance symbolize public welfare, as the designers explain. The three snails represent "slow life", as care and integration take time. That symbol was also taken up by the lamps made by KingBo Infinite Creation, and the hanging planters. The colours used are mainly light brown for the cardboard tubes and blue, with an integrative role. They balance each other out, bringing warmth to the interior and calming the sensitive moods of the mentally disabled people in the centre.
TOWOdesign's Snail Baby Growth Center is an elegant, light, and flexible response to a considerable double challenge. On one hand to recover a pre-existing building and do so on a very tight budget, but without compromising the result. On the other to cure and rehabilitate the mentally disabled, who find a welcoming and serene environment here. 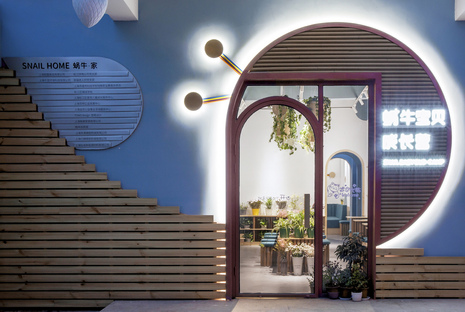 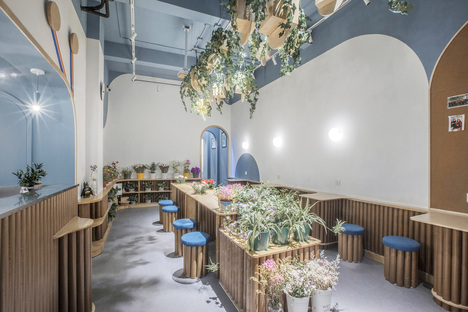 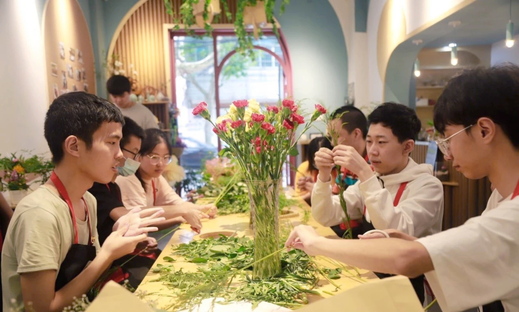 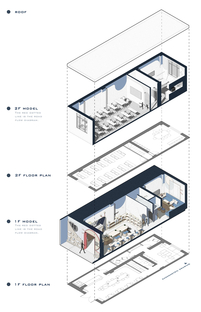 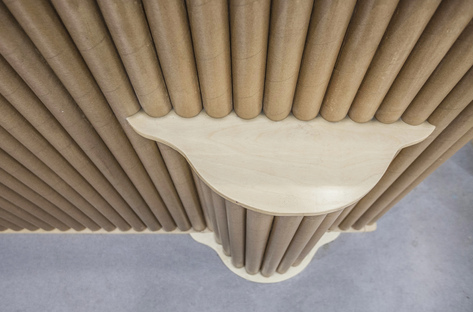 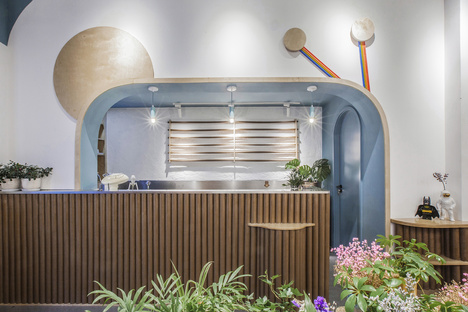 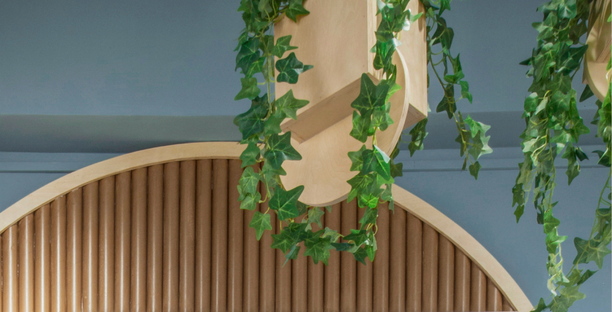 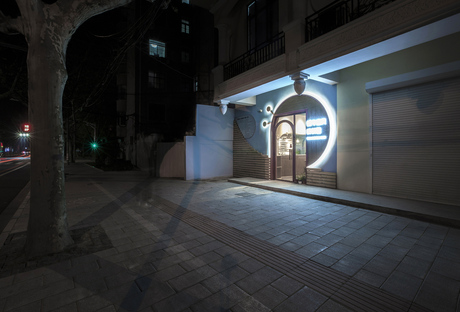 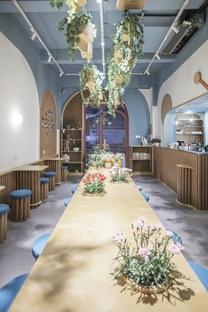 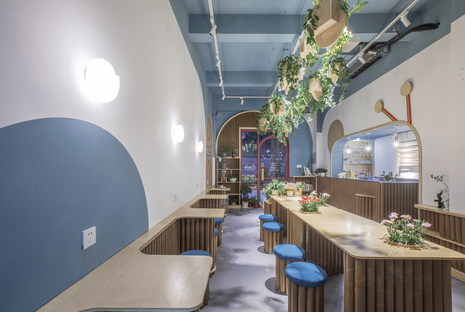 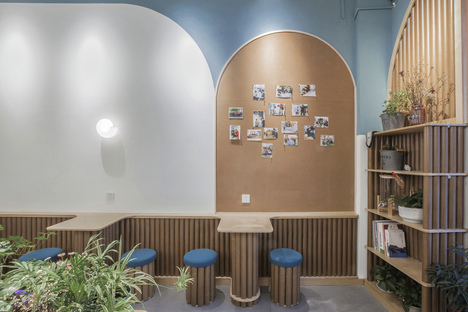 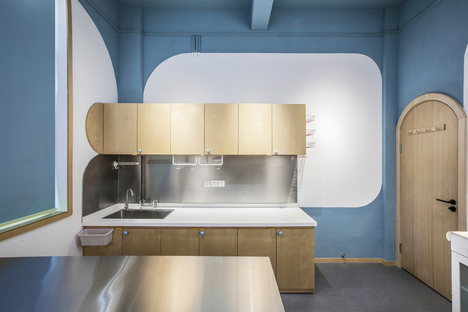 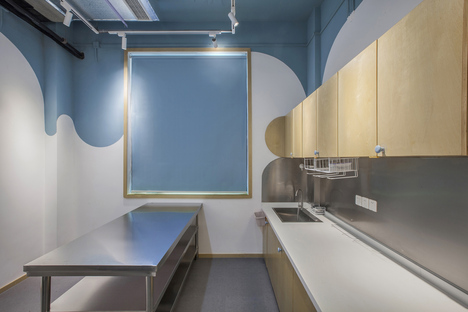 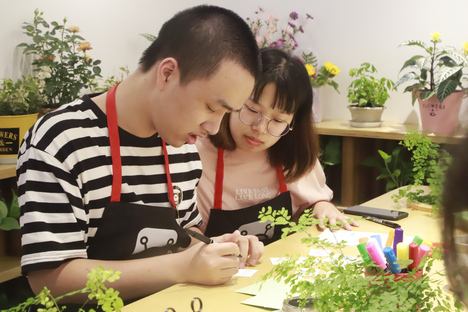