As we usher in a new decade, we take a look back at 2019 and one of the creative community’s most popular events: Burning Man. With “Andromeda Reimagined: A Sanctuary in Deep Playa”, architect John Marx designed a striking installation that pays homage to heroic women, while providing respite to fellow Burning Man participants in the Nevada desert. 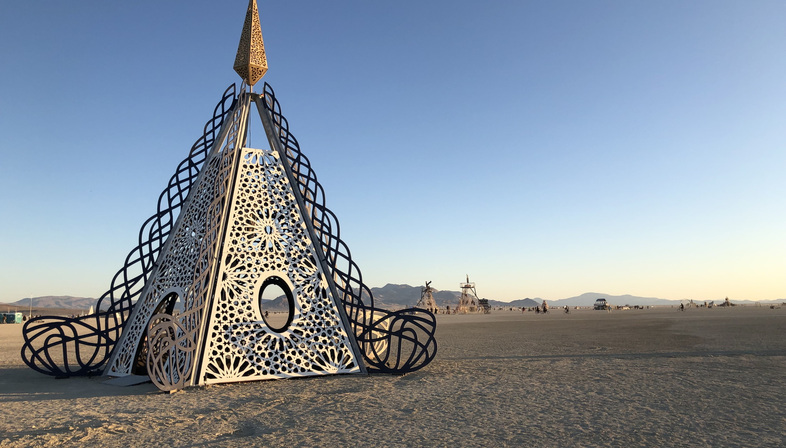 Burning Man is a nine-day event held in the Black Rock Desert, Nevada, traditionally ending on the first Monday of September - Labor Day in the United States. The name "Burning Man" comes from the symbolic ritual burning of a large wooden sculpture ("the Man") that usually takes place on the sixth day of the event. But Burning Man is not a festival, it is a community, a temporary city with a population of 75,000, including hospital and airport facilities, which is completely dismantled after the event. Leaving no trace, particularly of waste. “A city in the desert. A culture of possibility. A network of dreamers and doers”, to quote the website.
Of course, in addition to the Burning Man, there are also many other artistic expressions and installations, like the art cars, which we discussed in the past.
Under the 2019 theme of Metamorphosis, a celebration of change, and an exploration of uncertainty, architect John Marx, AIA, co-founder of Form4 Architecture who has participated in the Burning Man for many years, created "Andromeda Reimagined: A Sanctuary in Deep Playa”. An installation he presented at the WAF2019 in Amsterdam, where we were lucky enough to meet him in person.
Keeping with Burning Man’s art theme of “Metamorphosis”, Marx led the Bay Area art collective Playa Muses with the project leader Brian Poindexter in a reimagining of the Andromeda myth, evolving the story from a classic male hero narrative to a story of female empowerment. The structure challenges the Greek tale of Andromeda, who was saved by Perseus from a death sentence before attaining celestial immortality as a constellation. In the reimagining by Marx, Andromeda—as a strong, independent woman—saves herself with the help of a supportive community.
The 7.92-metre high pyramid structure has five, 3-metre-wide sides, each of which has ornately decorative, CNC-cut plywood walls. The installation is meant to evoke the starry heavens, at the same time providing shade and respite in the Nevada desert. At night, the whole structure turns into a lantern illuminating the desert landscape. Blue, rotary cut fins line the pyramid’s vertices, mimicking the swirling trajectories of the cosmos. It was all designed to be easily transported and built on the Black Rock site.
The plush interior of the pyramid structure includes comfy rugs and seats to relax on in the shade, and enjoy four oval paintings by Mary Graham depicting the reimagined narrative of Andromeda, and a fifth hanging panel displaying the structure’s thematic poem, “How Brightly”. A two-metre-high bronze sculpture by Mischell Riley called “Freedom and Awaken” anchors the centre. Markers hang from the walls, prompting visitors to proclaim their own female heroes along the walls.
“The structure itself relates to the infinite potential of the stars in the sky—specifically the Andromeda constellation, but not in any literal way”, says Marx. “The white star-shaped cutouts and the dramatic swirls represent the arc of planets and stars as they move across the sky.”
For John Marx, the best thing about Burning Man is that it provides the opportunity to do something for the pure and simple joy of doing it, and to be able to contribute with beauty to the temporary community of Black Rock. A bit like he writes in “How brightly”: “Your life is not measured by how brightly you might shine for one glorious moment as the sun but rather in how beautifully you add your light to the universe of stars in the evening sky.” 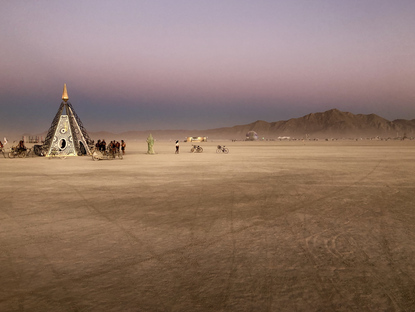 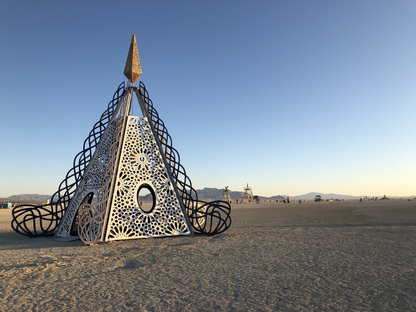 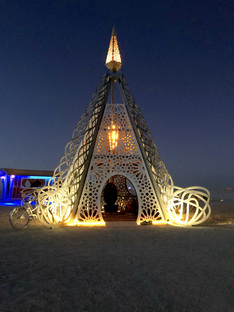 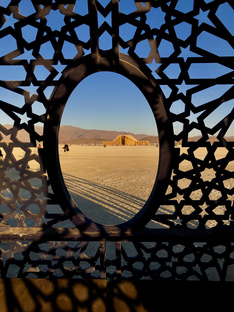 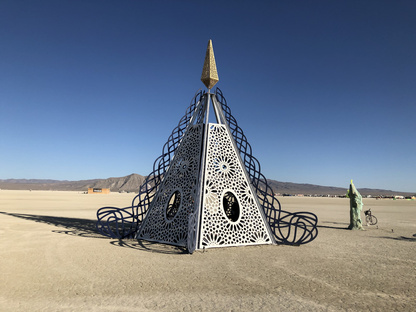 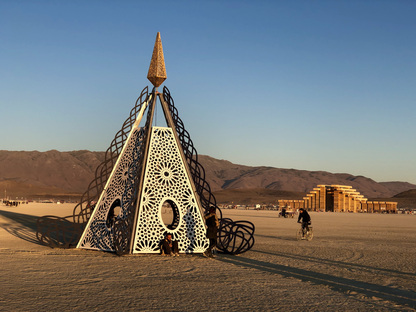 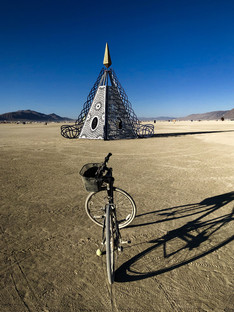 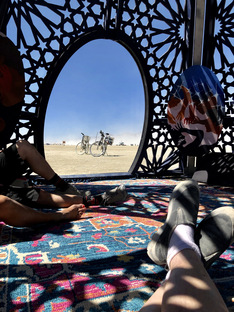 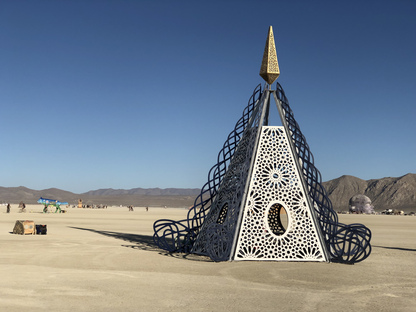 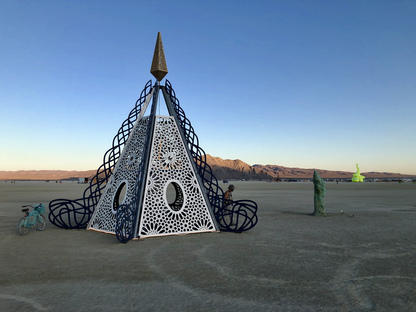 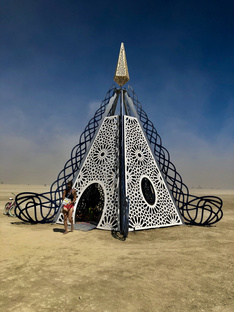 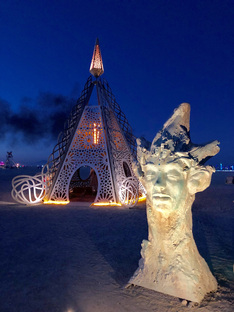