Active tiles for the environment

“Disaster Recovery” projects are not only for distant places, but can be found right here in Italy, such as the reconstruction in the wake of the 2009 earthquake in Abruzzo, where use of Graniti Fiandre’s Active tiles for “Il Bruco” nursery in Bazzano helps ensure a healthy environment.

The photocatalytic power of titanium dioxide (TiO2) to purify the air and eliminate bacteria is a well-known phenomenon, but not everyone knows that the benefits depend largely on the micrometric rather than nanometric dimensions of TiO2, in a process that involves no risks to human health or the environment during manufacture, application or final use. The most interesting case is Graniti Fiandre’s ACTIVE Clean Air & Antibacterial Ceramic™ tiles. The photocatalyst is not consumed in the oxidation process, which uses only substances present in the air to break down pollutants into a form which is not damaging to the health, but activates and accelerates the reaction. Its particles are not directly involved, with the result that the action of the titanium dioxide remains unaltered over the years.

Fixing TiO2 on ACTIVE Clean Air & Antibacterial Ceramic™ tiles at high temperatures ensures that the surface of the tiles is extremely resistant to abrasion due to tread, even in the presence of intense traffic, guaranteeing long-lasting photocatalytic effectiveness.

The effects have been tested by the University of Milan’s Department of Physical and Electrical Chemistry. Comparison of the photocatalytic power of 100 m2 of White Ground Active tiles with the natural absorbing power of trees in removal of nitrogen oxides demonstrates with scientific certainty that 100 m2 of White Ground Active tiles degrade as much NOx as about 30 trees, corresponding to 22 m2 of leaf surface, in one day. The figures clearly demonstrate the benefits for the environment.

These tiles are used in “Il Bruco” nursery school in Bazzano, donated and conceived by the FIAT Foundation and designed by Studio A.S. Architetti Associati of Turin for a hundred or so children in three kindergarten classes and two nursery school groups for infants (more details under http://www.floornature.com/architecture-news/news-active-coverings-for-the-“caterpillar”-in-bazzano-7783/).

The tiles were applied to the outside, where they compete with the purifying power of the trees, and inside, where they actively combat disease. Their effective action fighting bacteria, including particularly hazardous bacteria such as escherichia coli, staphylococcos aureus and klebsiella pneumonia, make them ideal for application in public places. The result not only purifies the air and protects the nursery school’s little pupils but creates a welcoming environment with a modern look, in an all-Italian disaster recovery project. 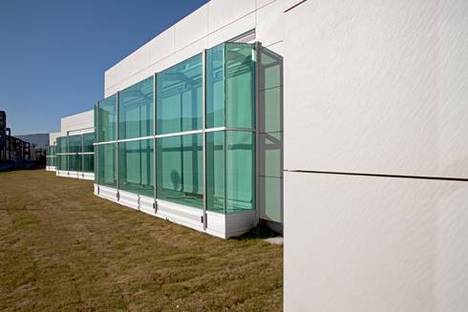 The winners of the AIA National Healthcare Design Awards program

Livegreenblog in Pietrasanta and Pisa, The City and The Water