One of the most eagerly-awaited events for garden enthusiasts in North America has opened to the public. The 23rd International Garden Festival at the Jardins de Métis/Reford Gardens in Grand-Métis in Quebec presents five new gardens. They address the theme of 'Adaptation'. 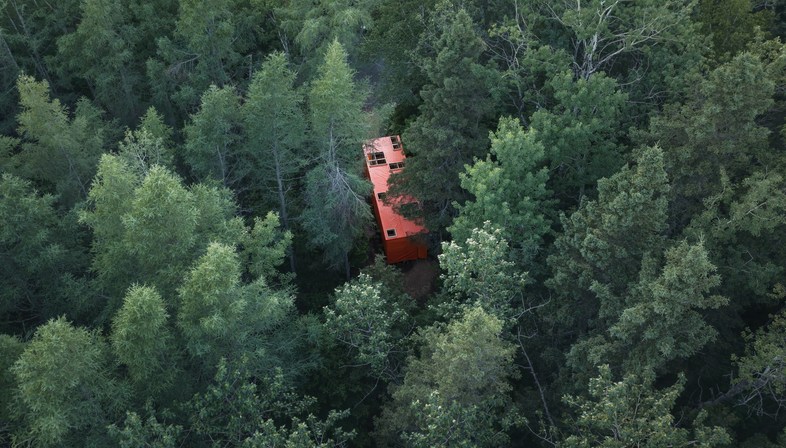 For many years we have been following the International Garden Festival, the most important contemporary garden festival in North America, held at the Jardins de Métis/Reford Gardens. It is at the confluence of the St. Lawrence and Mitis rivers, 300 km northwest of Quebec in Canada, designed by Elsie Reford from 1926 to 1958. This is one of the most renowned gardens in North America and is considered one of the 150 great gardens of the world. The Festival takes place on a site adjacent to the historic gardens, enabling a dialogue between history and modernity, between preservation, tradition and innovation.
The five new gardens at the International Garden Festival, which can be visited until 2 October 2022, are inspired by the theme “Adaptation”. This word well describes what we are facing, particularly in the last two years because, in order to live and survive, human beings, like nature, must demonstrate adaptation and resilience.
But let's look at these five projects in detail. The first is FORTERESSES by Maison029: Eadeh Attarzadeh, an urban planner and designer, and Lorenzo Saroli Palumbo, a Montréal-based architect. Forteresses is a symbolic intervention within the forest, proposing an aggressive method of protecting our flora from its greatest predator: ourselves. The intervention stands out due to the beauty of its geometries, and encourages visitors to question the impact they have on their environment. All while reminding them that our flora is often unable to protect itself. LICHEN by Marie-Pier Gauthier-Manes, Chloé Isaac, Victor Roussel, Montréal, on the other hand is inspired by terracotta pots, true archetypes in gardens. This installation consists of 1,200 handmade terracotta rings baked in an open-air kiln right in the Jardins de Métis. Like true lichen, which is a perceptive, malleable and changeable organism that adapts in contact with topography, humidity and environmental temperature, the installation is also sensitive to the perturbations of its environment and is therefore a valuable indicator of environmental change.
GRAVITY FIELD by TERRAIN WORK demonstrates the robust adaptation of plants, even under extremely challenging conditions. Although they play a key role in mitigating the effects of climate change that threaten our existence as a species, they too are vulnerable, and must adapt quickly to a rapidly changing climate. While LES HUIT COLLINES by ONOMIAU are eight hills conceived as evolving structures that imagine biological spatialities. An assemblage of surfaces that reveals the richness of an entire environment, catalysing other forms of interaction for a variety of living beings. The installation influences the climate by mitigating the summer heat with its nuances and flora. FORÊT FINIE, ESPACE INFINI? by Antonin Boulanger Cartier, Pierre-Olivier Demeule, Melaine Niget, Québec, from a distance resembles a pile of sawn wood waiting to be put to its next use. It is a defined-shaped passage obstacle, covered by a plastic sheet, waiting in the summer heat. According to its creators, it should serve to make people realise that the space we build comes from a world of limited resources and therefore cannot be infinite.
In addition to the 27 contemporary gardens presented at the Jardins de Métis, a satellite installation, consisting of 156 recycled glass bottles arranged in a fan shape in front of the Centre d'art de Kamouraska, captures the wind of the open sea and plays melodies reminiscent of foghorns: Mer du vent by Emmanuelle Loslier and Camille Zaroubi, landscape architects and musicians from Montréal. Their installation, Miroirs acoustiques, created in 2021, is again presented on the site of the International Garden Festival and, together with the other gardens, welcomes the public until 2 October. 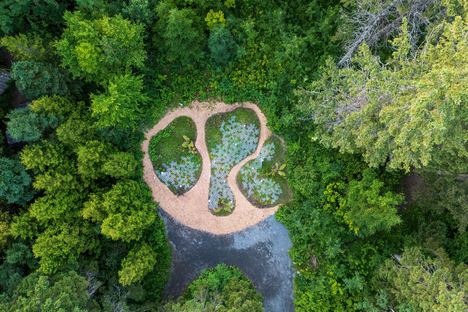 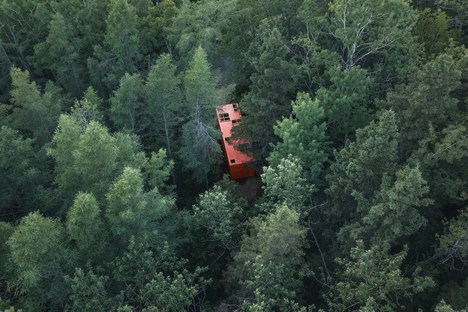 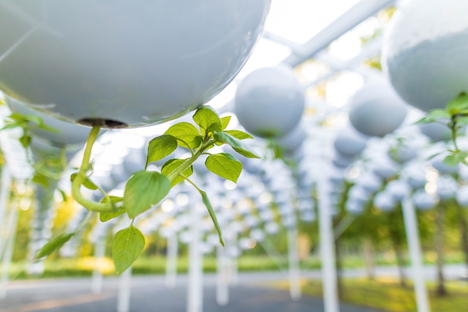 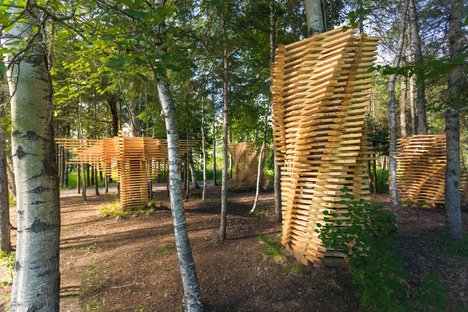 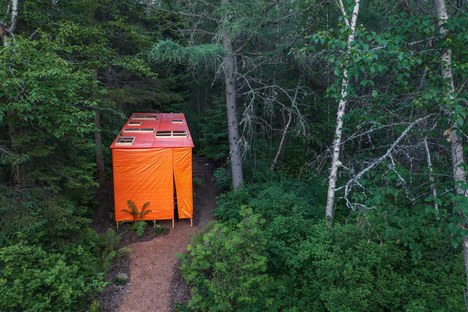 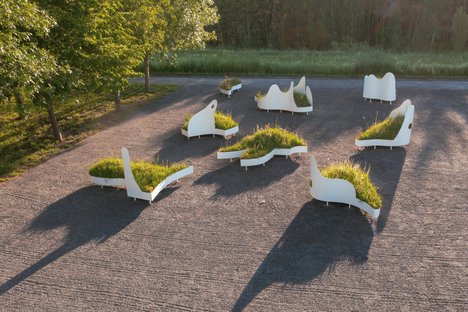 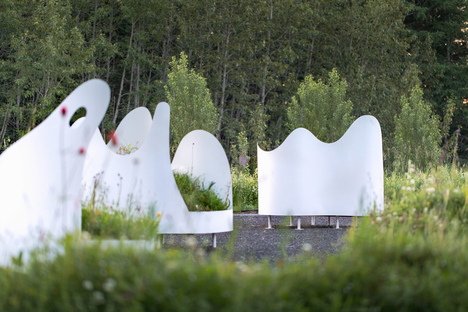 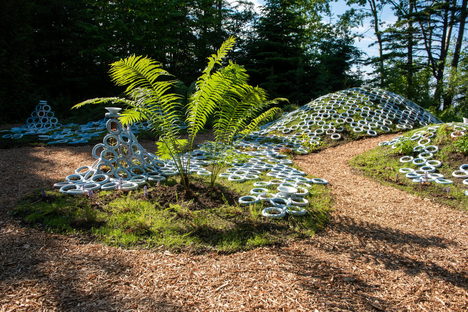 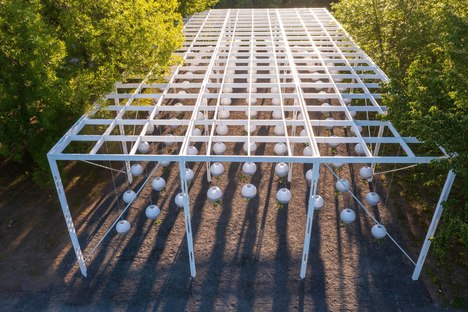 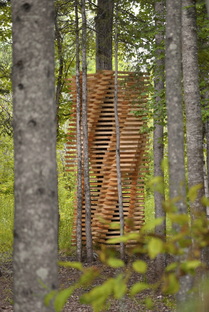 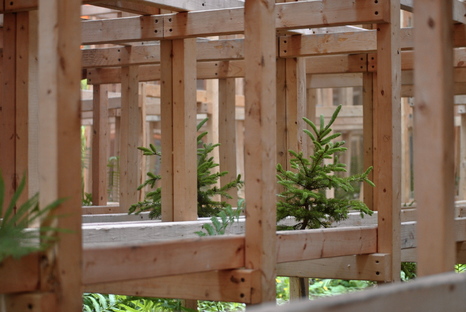 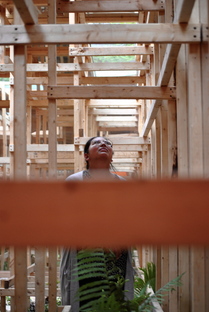 The 20th edition of the International Garden Festival in Grand-Métis