Indian architect Balkrishna Doshi, winner of the 2018 Pritzker Prize, will receive the 2022 Royal Gold Medal, one of the most important international architecture awards, presented annually by the Royal Institute of British Architects, RIBA. The award is assigned to studios or professionals who have had a significant impact on the progress of architecture, either directly or indirectly. 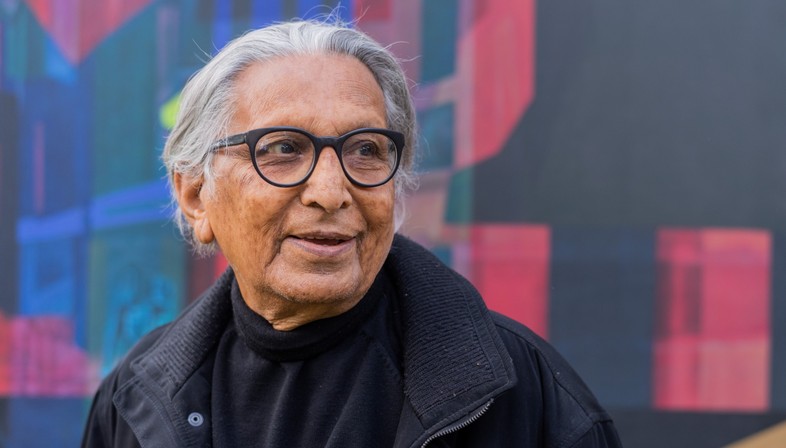 The 2022 Royal Gold Medal, awarded by the Royal Institute of British Architects with the approval of the Queen of the United Kingdom, will be presented to architect Balkrishna Doshi: another important acknowledgement of the work of this important master of architecture awarded the Pritzker Prize, considered the Nobel Prize of architecture, in 2018. The Royal Gold Medal jury described the Indian architect as “a visionary constructor of ideas who works with form and light", going on to emphasise how his buildings celebrate the local architecture and natural habitat to create suitable spaces for accommodating everyday life.
Balkrishna Doshi is considered a true pioneer of modern architecture in India, an outstanding representative of Indian modernism. He was born in 1927 in Pune and studied at J J School of Architecture in Mumbai. He worked with Le Corbusier, first in Paris and then in India, supervising his projects in Ahmedabad, and also worked with Louis Kahn for more than a decade, collaborating in the construction of the Indian Institute of Management in Ahmedabad. He has had a major influence on new generations of architects, completing more than 100 projects in a career more than sixty years long and teaching in India and abroad as “visiting professor” in universities all over the world.
Aware of the important impact of the built environment on human well-being, the architect effectively combines modernism with vernacular architecture in his projects. His buildings are pervaded by a sense of belonging to the local land, climate and culture, incorporating craftsmanship and a sense of community. These are the values highlighted in the exhibition “Balkrishna Doshi - Architecture for the People”, the first major international retrospective of his work, held at Vitra Design Museum in 2019 and Architekturzentrum in Vienna in 2020.

The Indian architect’s production is extremely vast, but he is known above all for his urban planning projects and university campuses, including buildings for cultural institutions, administrative offices, social housing complexes, private homes and interior design. In 1956, Doshi and two colleagues founded the studio Vastushilpa, a name deriving from "Vastu", meaning the integrity of the environment, and "shilpa", a Sanskrit word meaning design. Vastushilpa is now a multidisciplinary studio with five partners and sixty employees. The architect’s most important projects include Shreyas Comprehensive School Campus (1958-63), Ahmedabad, India; Atira Guest House low-cost housing (1958), Ahmedabad, India; the Institute of Indology (1962), Ahmedabad, India; the Ahmedabad School of Architecture, which he worked on repeatedly between 1966 and 2012 and which became CEPT University in 2002; Tagore Hall & Memorial Theatre (1967), a 700-seat Brutalist auditorium in Ahmedabad, India; Premabhai Hall, a former theatre and auditorium (1976), Ahmedabad, India; the Indian Institute of Management in Bangalore (between 1978 and 1992); the headquarters of his own architectural studio, Sangath (1981); Kanoria Centre for Arts (1984), Ahmedabad, India; Aranya Low Cost Housing (1989), Indore, India, winner of the prestigious Aga Khan Award for Architecture in 1995; and Amdavad ni Gufa art gallery (1994), exhibiting the work of artist Maqbool Fida Husain in a cave-like exhibition space. 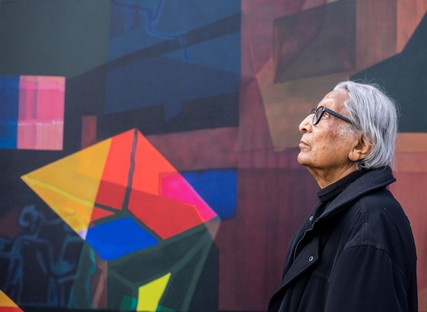 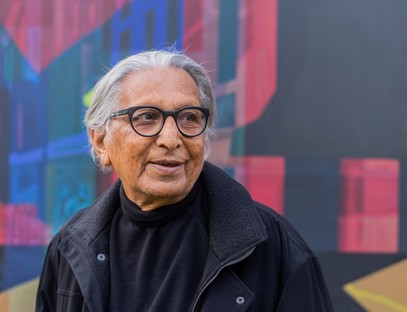 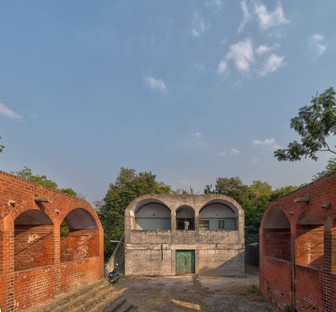 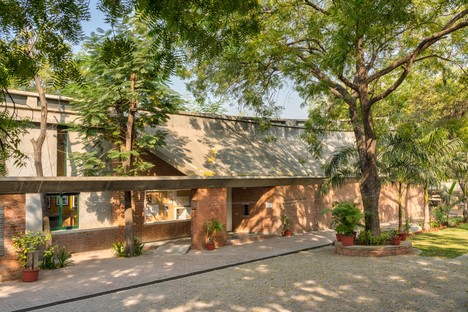 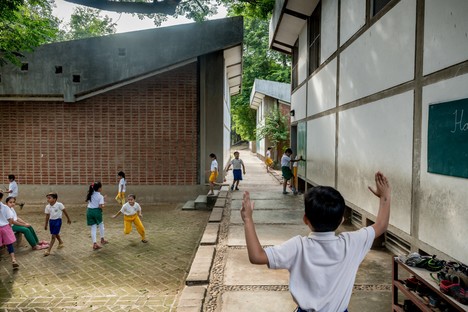 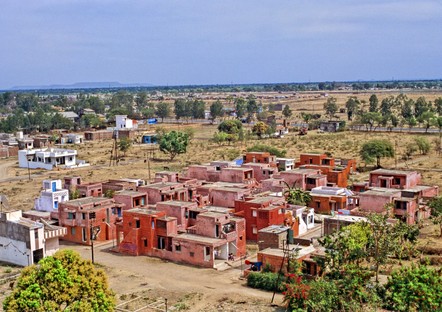 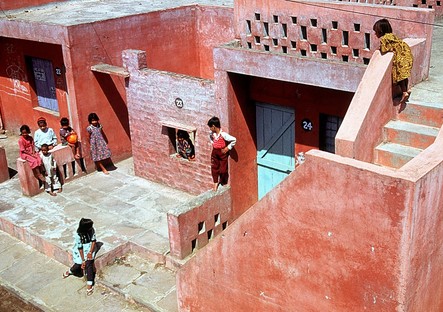 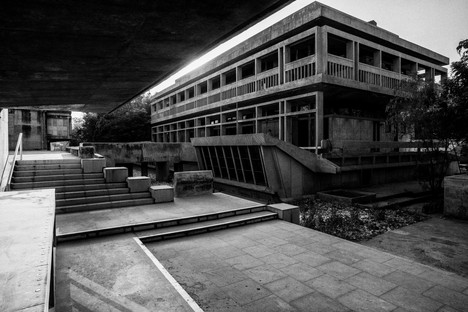 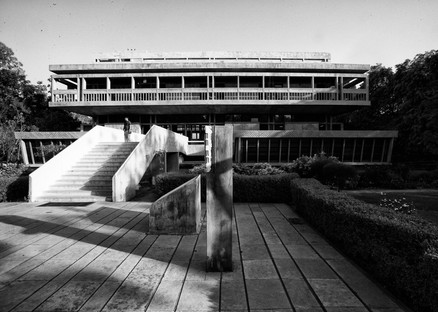 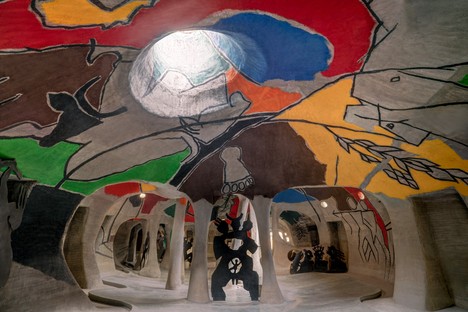 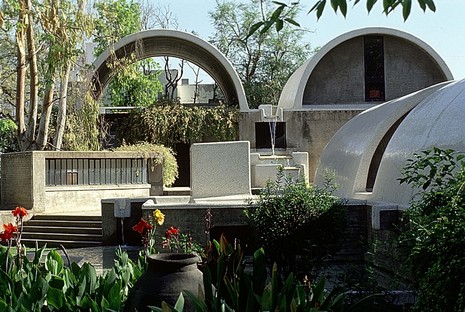 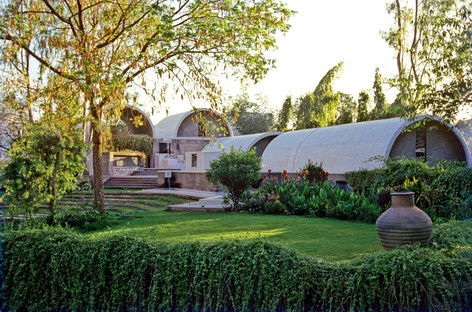 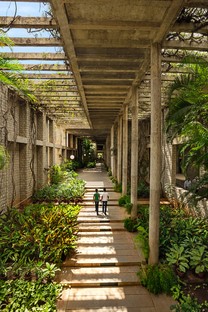 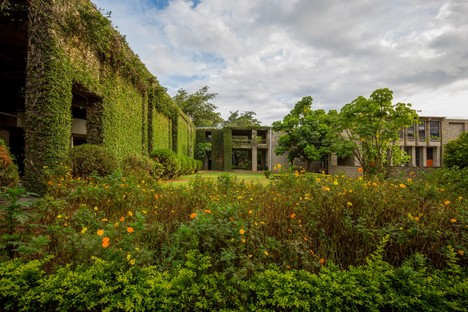 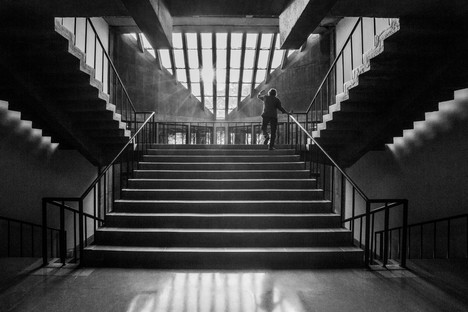 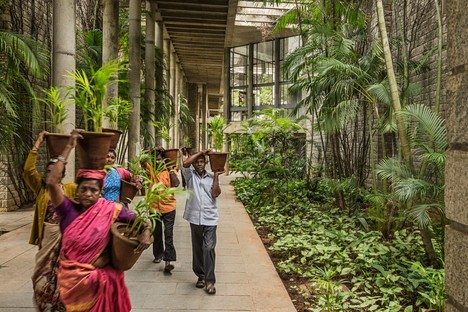 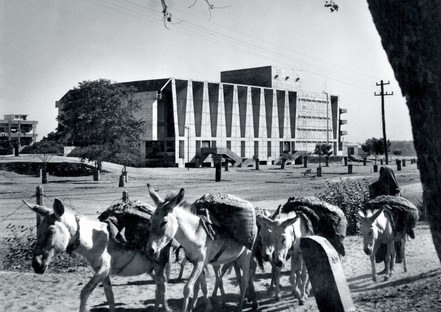 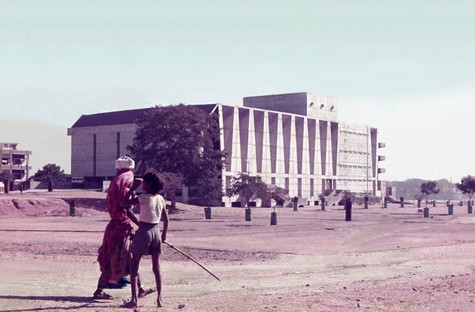