In the Laguna House in Botucatu, Brazil, AUÁ arquitetos have designed a home and refuge that brings nature indoors. The clients’ unusual request was for a house like a mountain chalet, which AUÁ interpreted as an expression of a need rather than in terms of image. 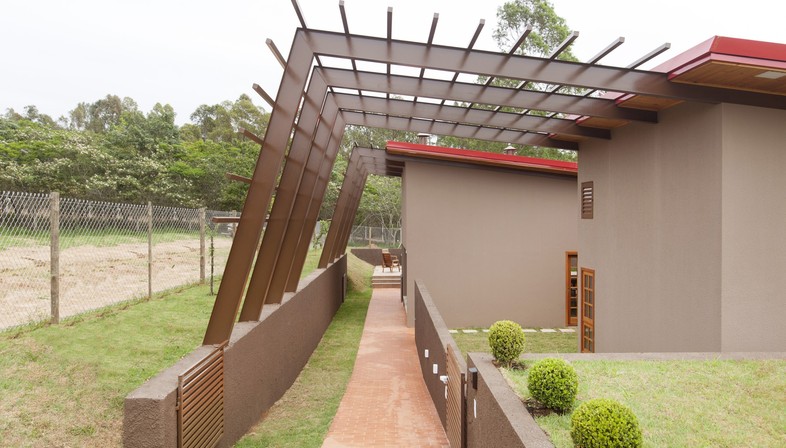 What makes the Laguna House project in Botucatu, in the state of San Paulo, Brazil so interesting is the architects’ response to the clients’ demands, which, as is often the case, were somewhat obscure and difficult to interpret. AUÁ arquitetos of San Paulo received an unusual request for a new home inspired by a mountain chalet. Anyone familiar with the state of San Paulo will know that Botucatu is located in a flat area with nothing like a mountain landscape, characterised by a mild, wet climate and homes with flat or only slightly sloped roofs.
How could the architects respond to such a specific request based on a setting so different from that of Brazil? The situation offered the architects of AUÁ an opportunity to reflect on the profound significance of images (such as that of a chalet) which clients often cite to sum up and illustrate what they want. The process is different from the work of the architect, whose task is not to replicate a figuration, but to interpret demands on the basis of the particular features of a context. Specific requirements which AUÁ arquitetos saw as physical, social, cultural, economic and natural.
An ideal photograph of a chalet home was examined to identify the meanings, emotional associations and expectations that the client and other people associate with such a home, in order to construct the expectations for representation applicable to the home to be built. The definition of the archetypal chalet has a timber frame, but also uses stone in combination with wood to create a bond with the earth and with natural materials. The clients’ real need was not to imitate the timber construction of an Alpine chalet, but to reproduce the rustic image of a robust, unfinished space that is simplified by time and use. In compliance with the local building tradition, the Laguna House is not made of wood, but of brick with a rough finish that is left coarse and unfinished with the intention of presenting a specific stylistic choice. Plenty of wood appears in the window and door frames, and stone was added as a decorative detail.
While the chalet is historically a refuge type of home, located in a large, open space in an isolated location, a spartan shelter protecting its inhabitants against the weather, as part of a developed area it becomes a house that turns in on itself to protect from the eyes of the people around it. In any case, the concept of simple refuge implied structural and compositional simplicity and few walls to establish distance between inside and outside.
But in the heart of Brazil this is interpreted with a floor plan divided into parts, in which there is room for nature to approach the house: three volumes are connected by partially covered outdoor corridors, satisfying the building’s residential purpose. The bedrooms on the northern and eastern side are sheltered from view and from the noise of the street, as they are set at a lower level. The garage block to the west screens the open patio with the jacuzzi. Big gardens on different levels are visible from all the rooms in the house.
As the third architectural element characterising the project, the new houses features a sloping roof that is not a response to the local weather but a way of defining and representing an architectural unit. This too is not made of wood, but of “cold” steel, with beams that extend out from the gables of the roof to form the components of a pergola, decisively changing their slope toward the ground, like the roof of an Alpine chalet.
The Laguna House, a refuge with a big single-gabled roof and only a few walls to divide and shelter it from the outdoors, was to become a comfortable home offering a series of advantages common in villas, and sometimes in conflict with one another, such as both privacy and conviviality in the interior, designed for hosting guests in the clients’ free time. Once these key elements of the project had been determined, the layout and section of the “chalet” took on a typically local character. Differences in the level of the ground were created so that the most private rooms would be below street level, encouraging a sense of shelter from the public eye with no need for extra walls. The soil dug away from the centre of the lot was taken to the edges to build artificial green dunes on which to plant fruit trees and vegetables. 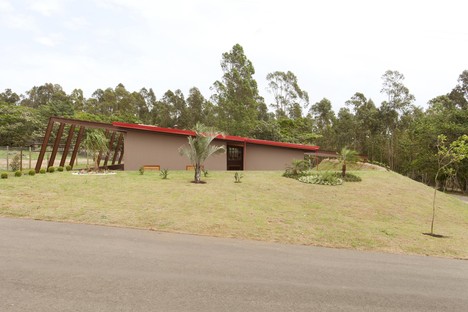 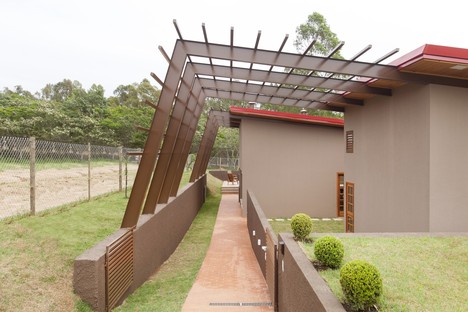 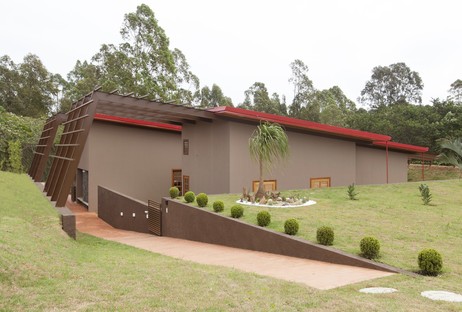 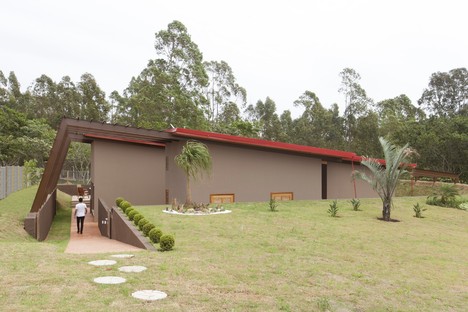 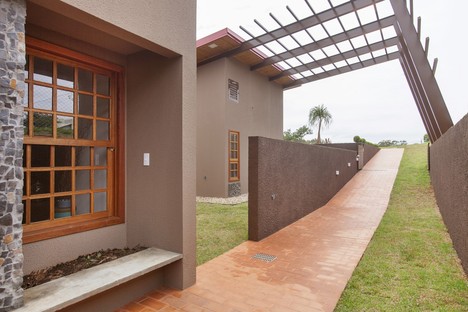 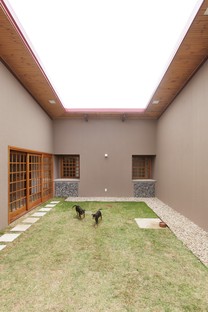 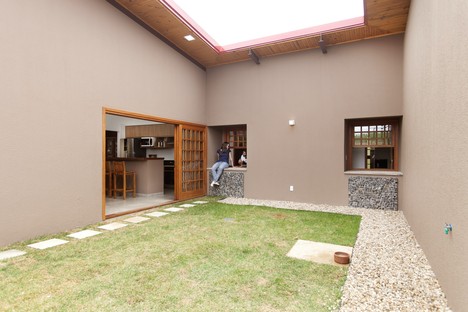 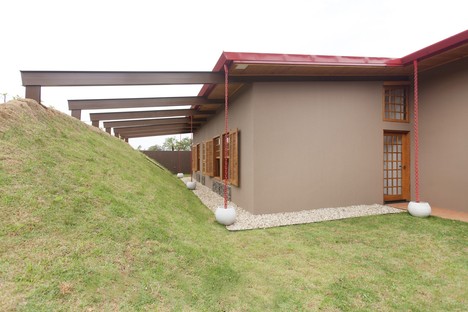 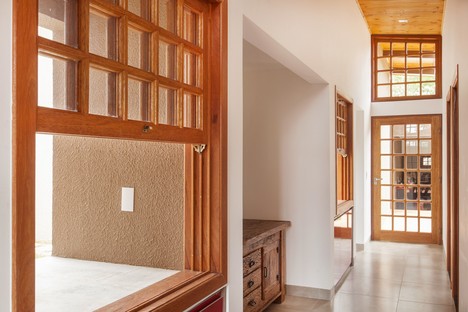 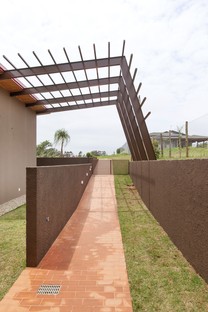 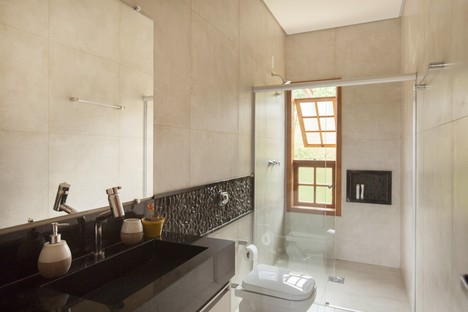 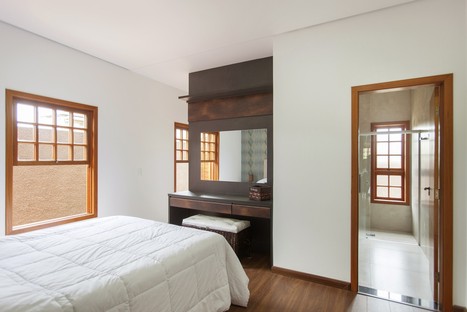 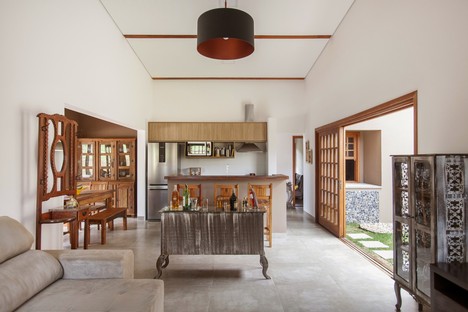 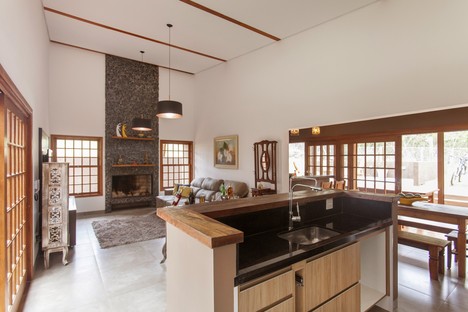 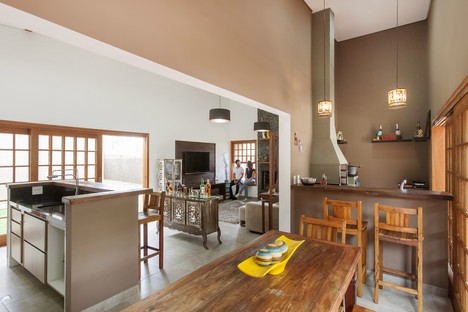 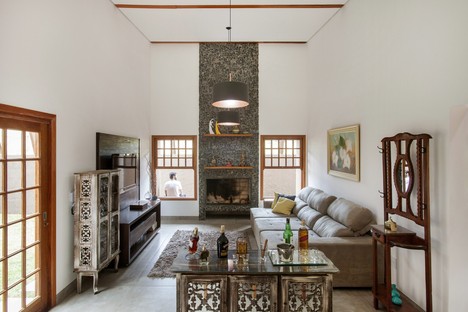 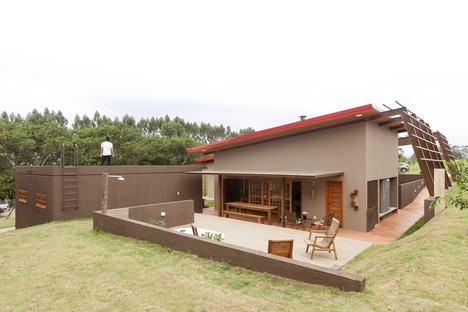 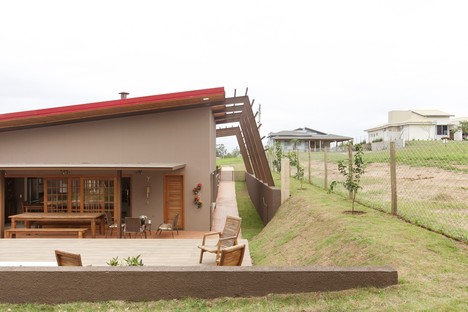 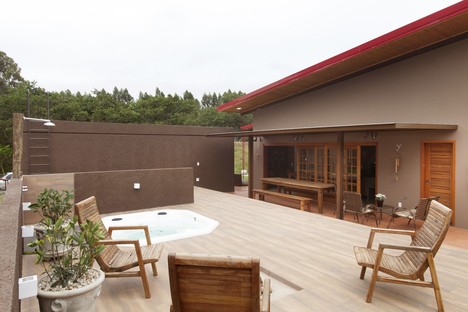 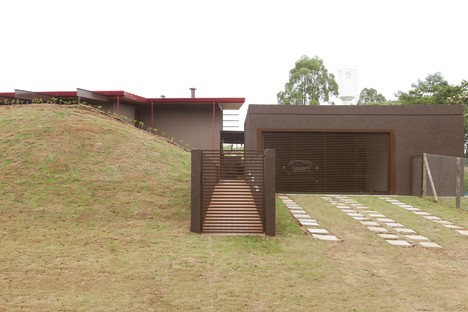 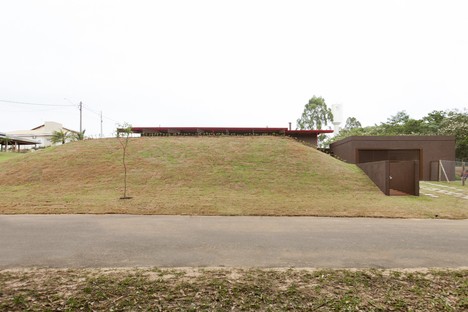 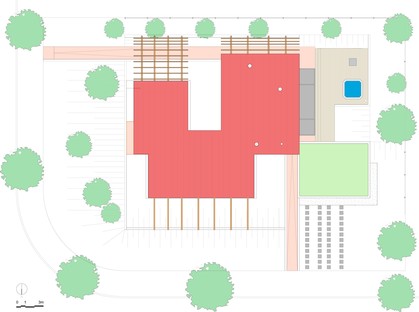 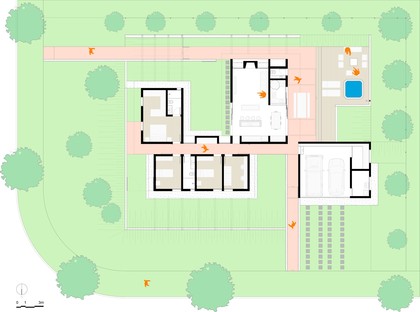