Atelier ST has completed work on the new Kunsthaus in Göttingen, mending a fracture in the continuous façade of Düstere Strasse. The project - with its severe, linear façades of moulded plaster - marks a step towards the completion of KuQua, the city’s arts district spearheaded by publisher Gerhard Steidl. 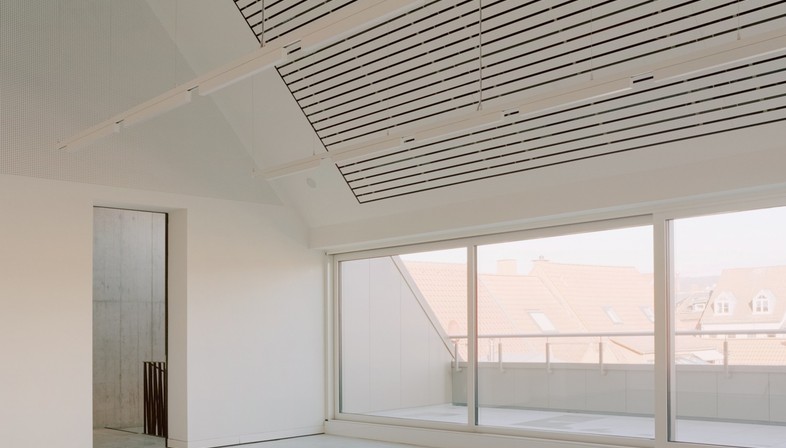 The ‘House of Arts’, which opened its doors in June 2021, is the final piece of an ambitious overarching plan to construct a cultural district in the picturesque town of Göttingen, located in the south of Lower Saxony. Designed by Leipzig-based firm Atelier ST, this new building on Düstere Strasse completes its continuous façade, alongside the Günter Grass Archive and the historic home of the Steidl publishing house. Nestled in this row of medieval buildings, where there was once a grassy area and the ruins of an old half-timbered house, there is now a centre for temporary exhibitions dedicated to international artists which specialises in works on paper, photography and new media. Artists invited to display their work, however, need not stop there: they are also encouraged to organise collaborations and events with other establishments in KuQua, Göttingen’s burgeoning new arts quarter, such as the Deutsches Theater, craft workshops, bookshops and a dozen other places of cultural interest.
It seems that idea of forming an arts district in the heart of this town can be traced back quite a way. Well-known publisher Gerhard Steidl, who still prints his books right there on Düstere Strasse, has long been a strong proponent of this cultural facelift. Thanks to a €4.5 million grant from the federal programme for ‘National Urban Development Projects’, as well as private funding, in 2016 the town of Göttingen announced an international competition for the construction of a Kunsthaus, with Atelier ST’s concept coming out on top. Around the same time, in 2017, Berlin-based architect Stefan Bernard won the competition to design the first internal public garden in the capital’s House of Arts.
“A very interesting solution that is convincing both in terms of atmosphere and functionality. A storehouse with a specific character and yet an understated addition to the urban fabric on Düstere Strasse,” commented the competition jury.
Atelier ST’s design skilfully reconciles the desire for a reinterpretation of architectural history with the typological requirements of a new structure. As such, the Kunsthaus maintains a formal link with the architecture in the centre of Göttingen, specifically the characteristics of its half-timbered houses, the pattern of its stringcourses and the inclination of its gable roofs. That said, it features a new ‘face’ which marks a bold break with its otherwise traditional past, making it recognisable as the home of an institution with purpose amidst a row of homes and shops.
Indeed, the first critical issue faced in the project was actually the plot itself, covering an area of just over 200 square metres, squeezed in between the buildings of Düstere Strasse and the internal public garden. The need to respect the urban scale, which restricted its vertical development to no higher than the third floor, did not allow the architects to provide for a great deal of exhibition space. This resulted in the decision to make the structure out of reinforced concrete, thus avoiding the need to incorporate columns, resulting in greater flexibility for exhibitions. Whilst the basement level contains only the toilet facilities, technical areas and storage, every other floor from ground floor to loft level is dedicated to exhibition space. Two of these (the first and second floors) are earmarked entirely for exhibitions, whilst the street level has a smaller gallery to allow room for the foyer, which communicates with the garden, and the top floor is intended mainly for seminars and events. Here, a terrace built at roof level offers a magnificent view over the park and the rest of the arts district. As such, the link - both conceptual and physical - with the rest of the town is clear and immediately perceptible to those who enter from the main entrance on street level, as they can make their way directly to the garden, which is part of the cultural itinerary. Now refurbished, accessible to all and designed with children in mind, it also contains a site-specific installation donated to the town of Göttingen by American artist Jim Dine, whose studio can be found in the neighbourhood.
By way of reference to the other half-timbered houses on the street, Atelier ST have designed a structure with floors whose overhang gradually increases as it rises higher, culminating in projecting eaves. The only two free façades are finished with horizontal lines traced across the plaster which, according to the architects, are redolent of the works that are the gallery’s main focus, namely those on paper such as drawings and photographs. In order to achieve this, they revived a traditional technique that had fallen into disuse, which involves modelling mineral plaster with a custom-made grooved template. Simple though it may be, the effect is highly impactful, as the contrast between the building’s sandy colour and the red and brown of its neighbours - along with the almost complete absence of windows, aside for a handful of narrow metal ones - mark the Kunsthaus out as a public place for our time.
The interiors have a serious elegance about them resulting from the use of exposed concrete - polished for the floors and natural for the stairwell - as well as the neutral white plastered spaces in the exhibition rooms and the black metal railings that continue the theme of lines. What little daylight filters through the minimalistic windows does not prevent the spaces from being usable for the multimedia installations that they were so carefully designed to host. Finally, the kitchen and large sliding glass door serve to make the top floor highly versatile for collective events and show openings. 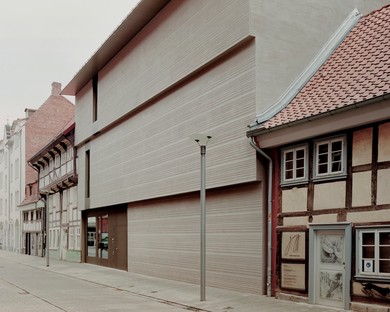 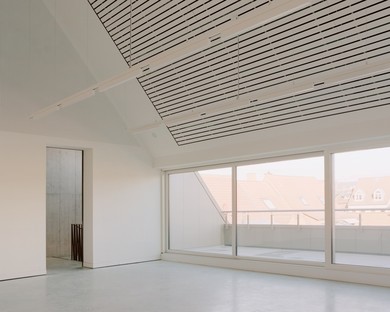 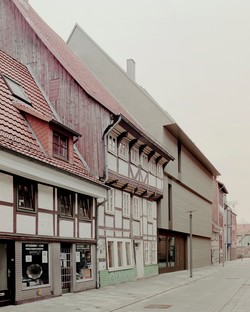 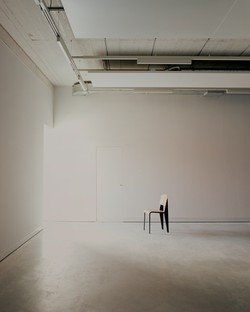 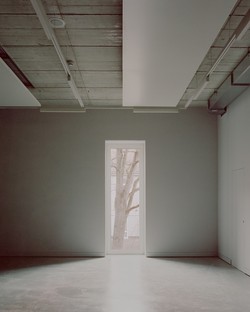 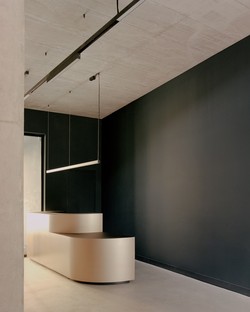 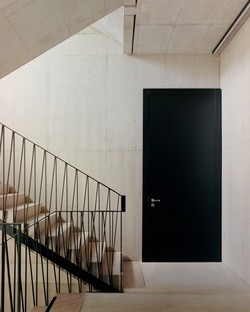 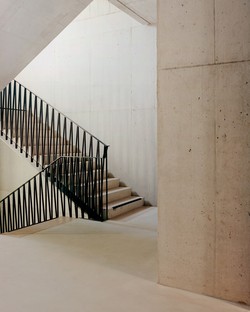 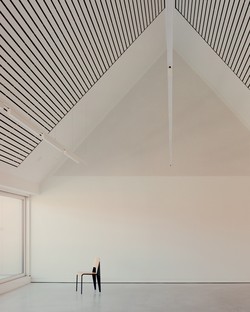 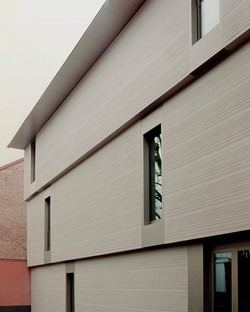 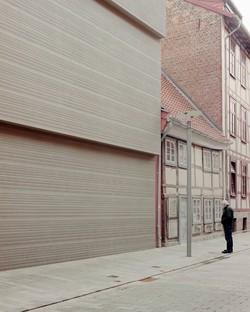 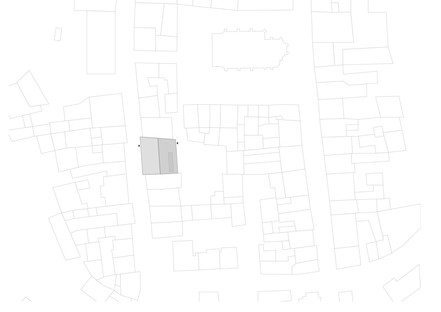 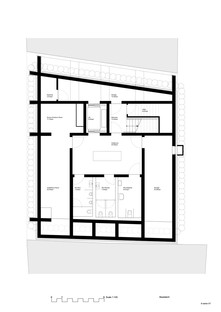 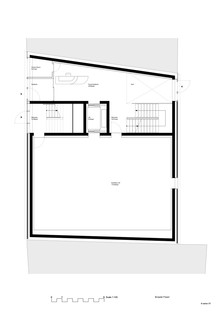 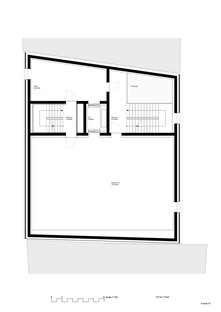 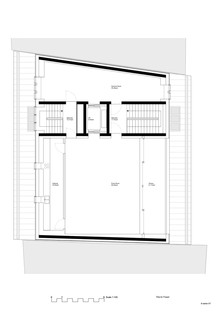 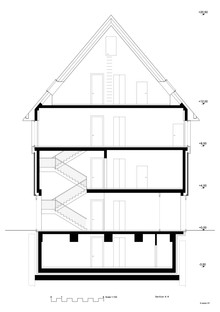 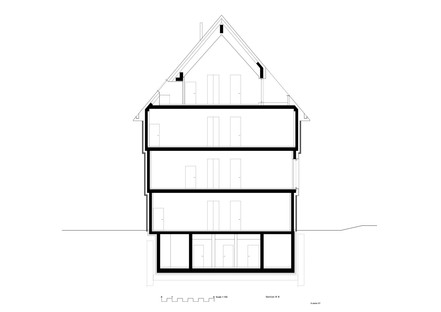