The Architettura Matassoni studio, set up by architects and brothers Alessandro and Leonardo Matassoni has recently completed a residential project in Arezzo. With tailor-like precision and overcoming the constraints imposed by physical and economic limits, the architects designed an essential house, a fluid and poetic space which becomes a micro-landscape suitable for a natural lifestyle. In the Italian province of Arezzo, Architettura Matassoni set up by architects and brothers Alessandro and Leonardo Matassoni have recently completed a residential project: “the Effebi House”, demonstrating that it is possible to create a fluid and poetic space even when starting from a “challenging” situation in terms of the existing physical and economic constraints.
As the architects explain “ inspired by sociobiologist Edward Wilson’s ideas on human evolution, we wanted to obtain an environment that could inspire a feeling of psychological comfort, like the re-emergence of consciousness into the light, of ancestral memories that we still have within ourselves”. The idea of an “ancestral shelter”, where it becomes possible to satisfy basic human needs, has found its architectural form in an essential and primitive home environment, yet one that becomes a fluid space, “a micro-landscape suitable for a lifestyle that is as natural as possible”. 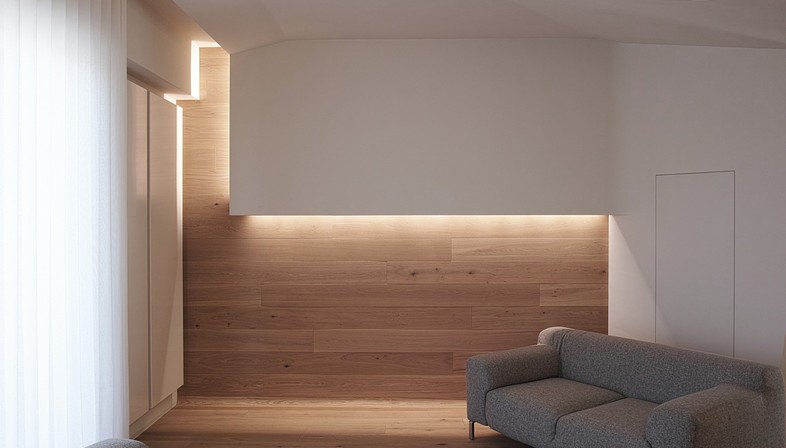 The “house” is an apartment offering just over 100 square metres of space, built in the 1970s. Architects Alessandro and Leonardo Matassoni had to satisfy the client’s requests, a young family of four looking to have a large living area with an entrance and living space, a dining area and kitchen and a sleeping area with three bedrooms and two bathrooms. All inserted in a context with stringent constraints imposed by the inherent characteristics of the property. The architects worked within a preconceived box, as the perimeter walls of the building could not in fact be changed, but the final effect is far from that of a box. A second important constraint related to the very nature of the property, to the solid brick masonry, the external supporting structure and the two internal spine walls.
A context that called for tailor-like precision in the design and in carrying out the work, constantly followed by the architects who were on site on a daily basis and who relied on a highly qualified team. An attention to detail that has made it possible to overcome the challenges inherent in the structure and, so to speak, to untangle the most difficult knots. For example, in spite of the delicate nature of the load-bearing structure in full bricks of the two spine walls, the two gaps needed to obtain an organic living space were nevertheless opened, respecting the original design idea. 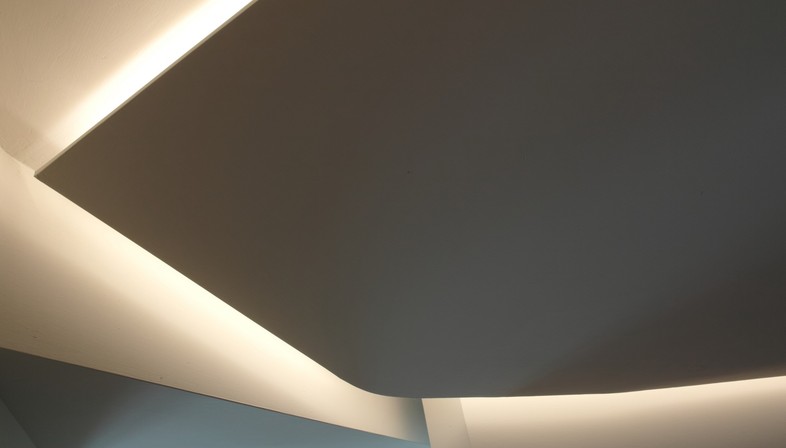 The Effebi House consists of a large entrance and living area that welcomes visitors and occupants of the home in an enveloping space. A feeling obtained thanks to a skilful use of the cladding materials. The effect sought is to do away with the feeling of being in a box. Constructing an enveloping space, the oak wood used for the floor “climbs up” to cover some of the walls, while in the same way the plasterboard of the false ceiling folds and “climbs down” to meet the wood. The terms “climb up” and “climb down”, unusual for the description of an interior, help elucidate the idea of these surfaces that fluidly cover the space, creating soft and rounded corners that seemingly make the wall disappear and contribute to a unitary and organic vision of the space.
Concealed from a direct view from the living space and vice-versa, the dining area and the kitchen extend on the opposite side of the entrance. The greater privacy needed for the bedrooms is ensured by a first sliding partition door which opens into the common hallway leading to the three bedrooms and two bathrooms. Sculpted surfaces and functional angles complete every environment and make it part of the general micro-landscape. 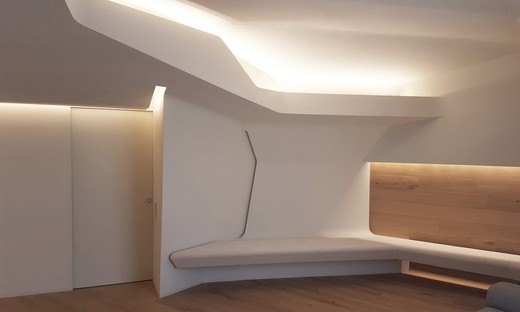 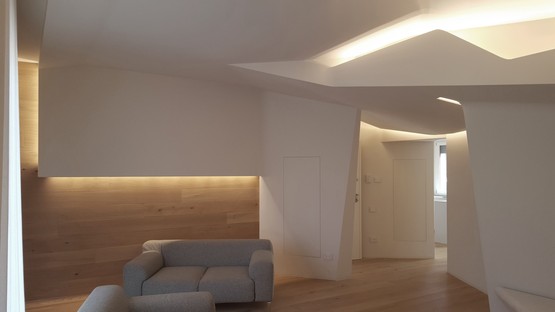 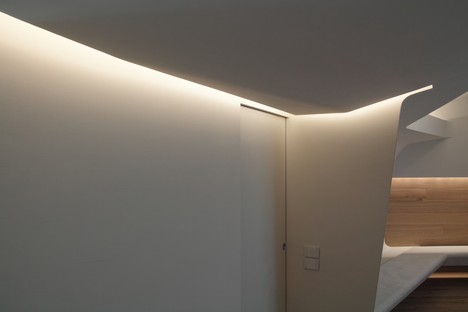 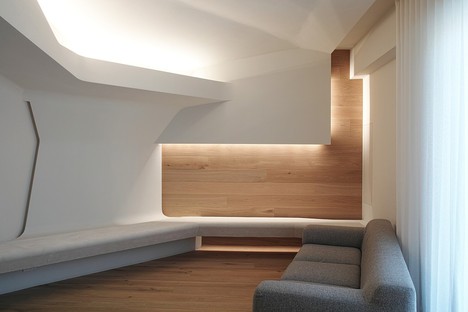 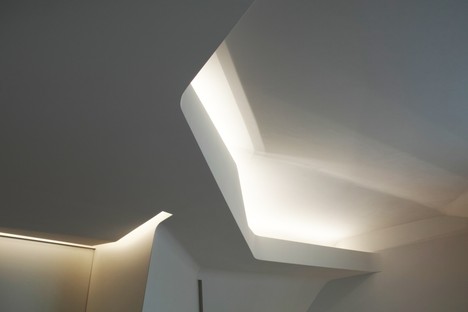 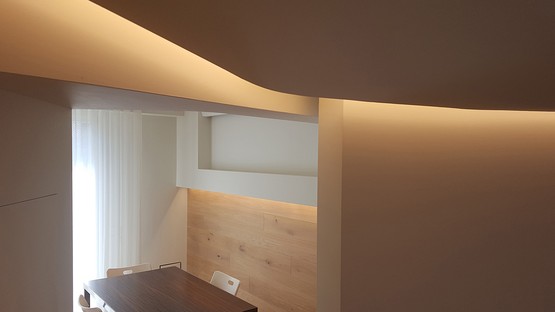 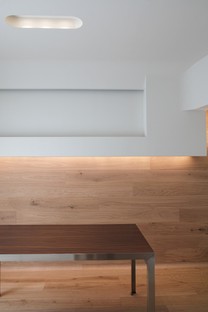 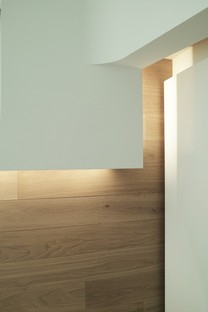 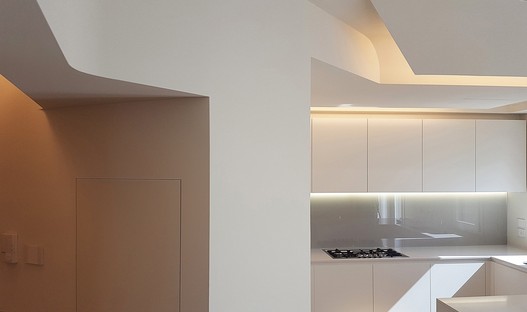 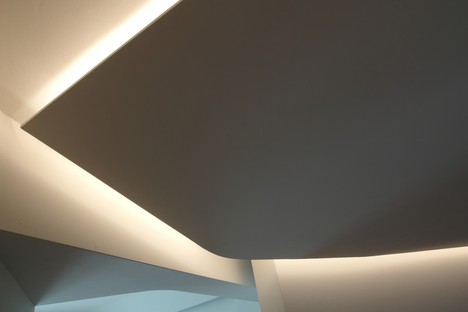 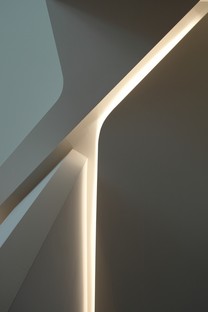 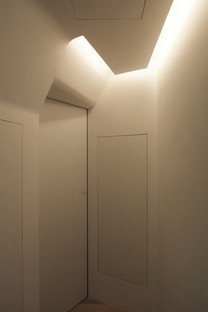 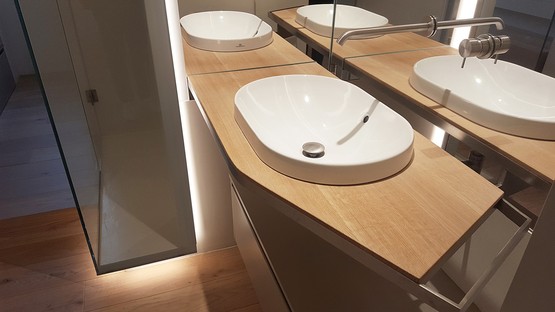