In the Flemish province of East Flanders, in the town of Melle, the architectural firm De Vylder Vinck Taillieu has transformed the Sint-Jozef building, located in the centre of the Caritas campus, into a new and experimental public space for discovering and defining new possible ways of living. 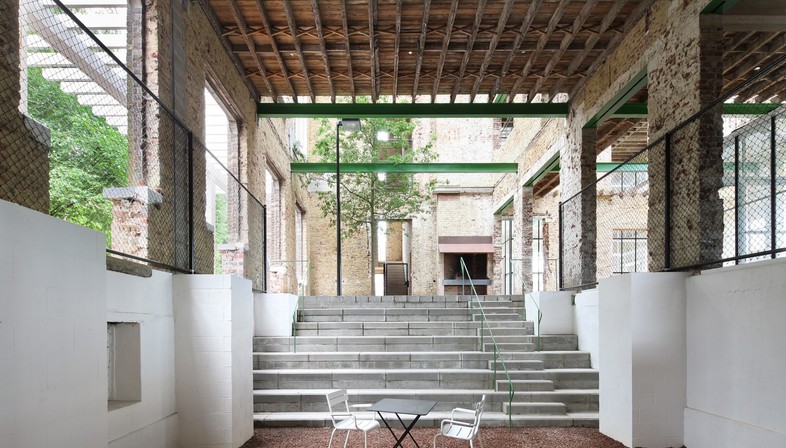 Architectural firm De Vylder Vinck Taillieu has designed an experimental public space formed inside the Sint-Jozef building in the centre of the Caritas campus in Melle, a small town of the Flemish province in East Flanders, Belgium. The interesting project with a fascinating story to tell was selected among the five finalists of the Mies van der Rohe Award 2019, the European Union award for contemporary architecture. 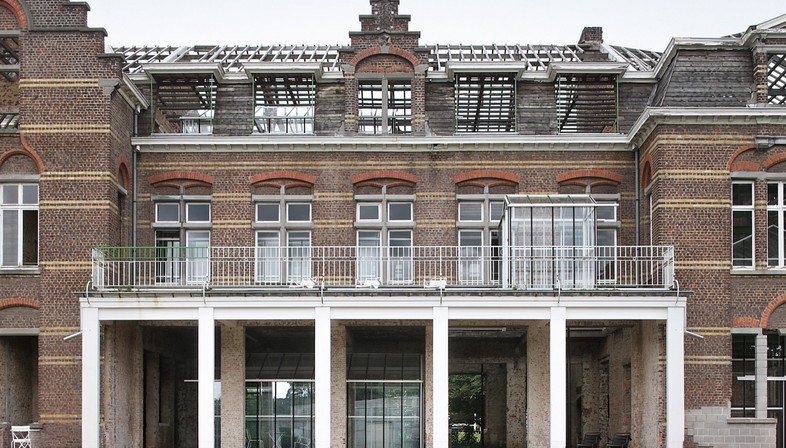 The Sint-Jozef is one of the buildings of a former psychiatric centre, a structure that was avant-garde in the era in which it was built. The large complex consisting of separate buildings, of which the Sint-Jozef was one, is immersed in a large green park. The predominant presence of green spaces over the buildings allowed each department to seem like an independent villa but with common architectural elements. Over time the buildings were gradually abandoned, then demolished and replaced with hospital buildings in the more classical forms that never integrated into the landscape setting. It was a fate announced also for the Sint-Jozef, and in fact the building was initially stripped out to recover materials, but subsequently an enlightened decision made it the object of a design competition, which was won by De Vylder Vinck Taillieu. Through a process of participation that involved various interested parties such as management, physicians, patients and staff of the centre, an essential question was posed to the architects. The question was about whether, acknowledging that it was impossible to adapt the structure to contemporary hospital standards, there was a possibility to find “another way to experience the building” for doctors, therapists and patients, effectively transforming it into an experimental public space. 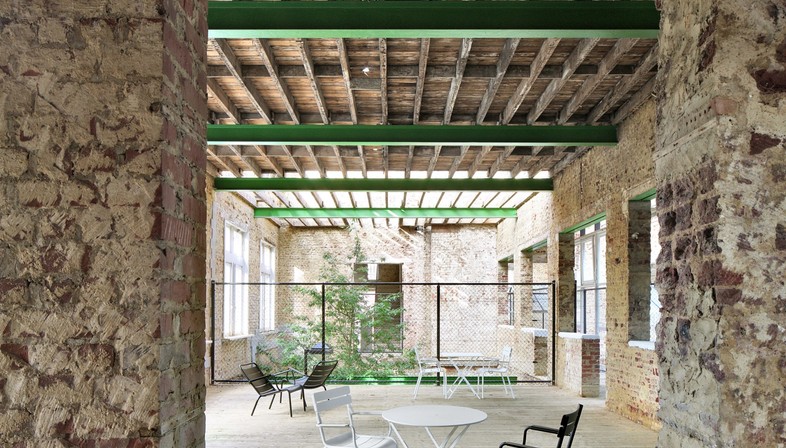 The client therefore set three different objectives for Architecten De Vylder Vinck Taillieu. First of all, to strengthen the relationship between the building and its setting, in particular the natural setting. The result was achieved by the creation of a white loggia on the main façade of the Sint-Jozef, which acts as an element of mediation between the architecture and its park and recalls the loggias present in the original buildings. Secondly, the respect for the original structure. The architects thus provided for eliminating all the superfluous elements, taking the building back to its original raw forms, repairing, rather than renovating, the parts where the material had been removed and leaving visible these points of “repair”. Inside the structure thus cleared out, volumes in clear glass were introduced which in form and materials recall actual greenhouses. These transparent volumes are used as new rooms of the building distributed on its three floors.
Responding therefore to the third point requested by the client, the new building appears as an open and legible doll house, easily modifiable over time, a project in continuous evolution and in line with the therapeutic intents for which it will be used. 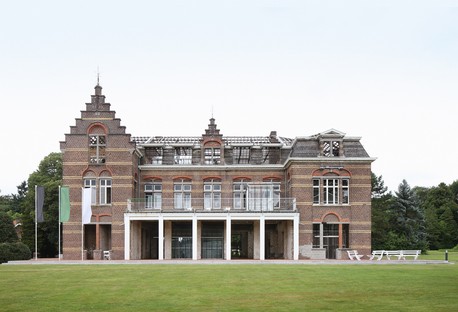 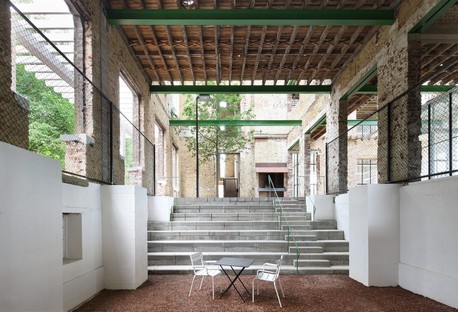 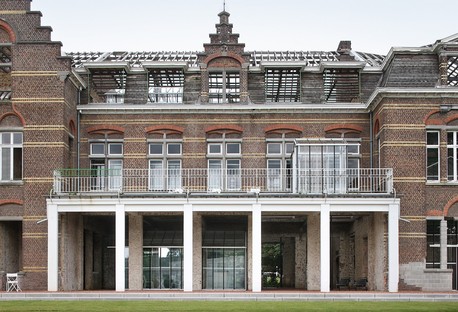 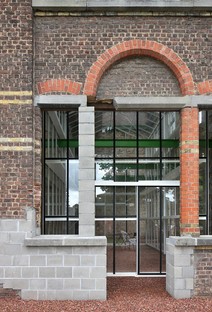 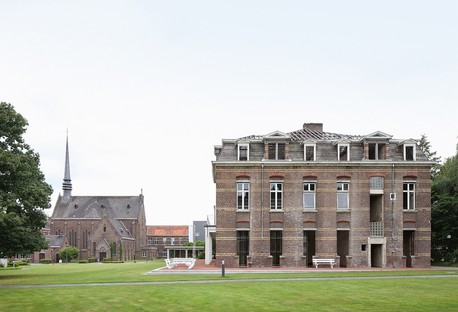 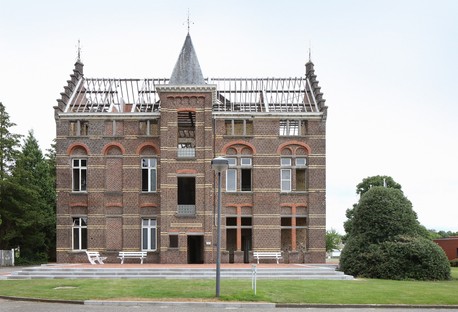 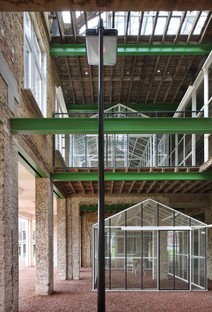 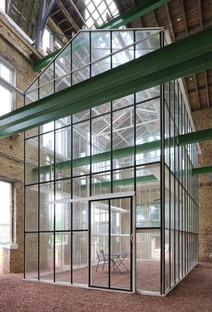 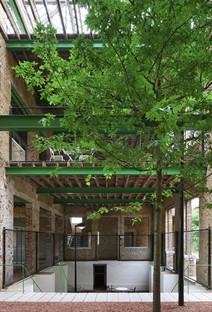 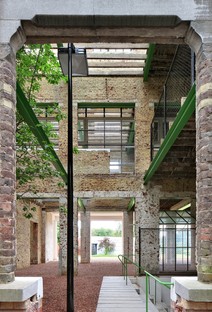 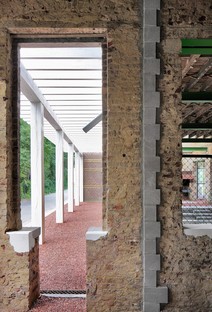 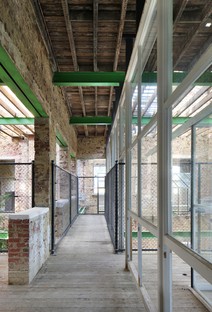 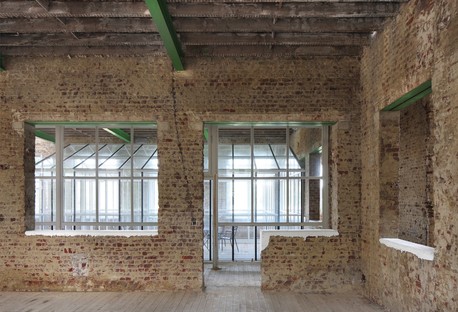 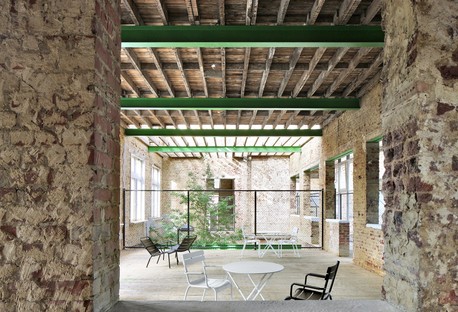 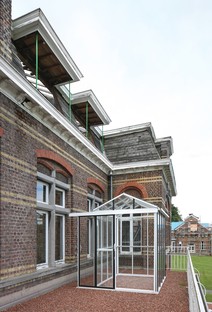 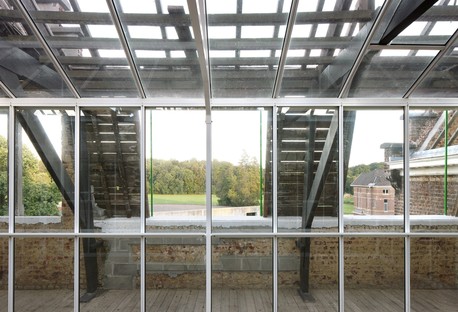 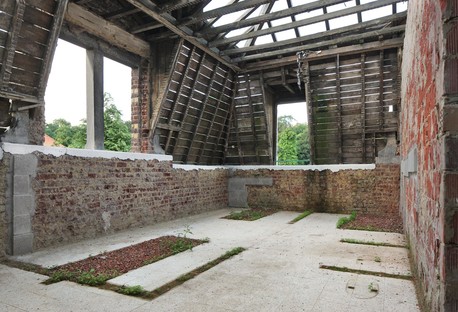 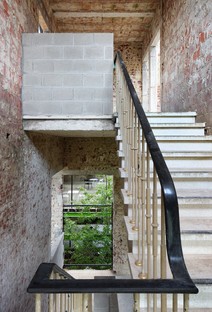