"Le Grand Palais" is a new multiplex cinema and museum space designed by architect Antonio Virga for the city administration of Cahors, in the French region of Occitania. The project is part of a broader urban redevelopment masterplan of the Place Bessières, a large square and former military site located in the historic city centre, recently transformed into a welcoming urban space. 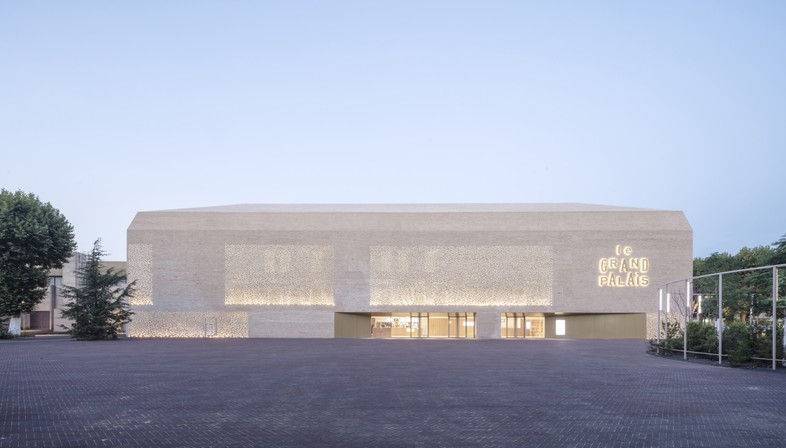 In the French region of Occitania and, more specifically, in Cahors, a town of ancient Gallo-Roman origin crossed by the Lot river, architect Antonio Virga completed the "Le Grand Palais" project, a new multiplex cinema that includes a museum space. The project, commissioned by the city administration and the Société Cadurcienne d’Exploitation Cinématographique, is part of a larger urban redevelopment masterplan that encompasses the entire Place Bessières area.
The Place Bessières square was formerly a military site where the army barracks were situated. Le Grand Palais occupies the east wing of the complex which had been destroyed by fire in 1943, located a few steps from the Lot river, on the north side of the historic town centre. Subsequently used as a parking lot, thanks to the new redevelopment plan the Place Bessières has been given back to the city as a welcoming urban space, intended primarily for pedestrians and including a large green area in the centre known as the “the oasis”. In this context, the project designed by architect Antonio Virga plays an important role. Indeed, Le Grand Palais becomes a key landmark for the city and a centre of attraction for citizens, encouraging them to use the new urban space. The new building houses the 7-theatre cinema with a capacity of approximately 1,051 seats and, with a separate entrance, the Museum of the Resistance. The building that previously housed the museum was demolished, in order to make room for the redevelopment project of the square and the construction of Le Grand Palais. From a compositional and planimetric point of view, architect Antonio Virga designed a building that harmoniously fits into the rigorous logic of the large 19th century military complexes and public buildings characterising the square, reusing and reinterpreting the original construction style in a contemporary key. The project was inspired by a number of key concepts such as simplicity of the lines and geometries, as well as an attentive choice of construction materials, elements that helped recreate a homogeneous image of the context.
Le Grand Palais is made up of two distinct volumes, one in brick and the other covered with gold-coloured aluminium panels. Two different souls for the same building, playing two different roles in relation to the public space. The first volume communicates directly with the local historical context, from which it borrows the construction material selected by the architect, the natural clay brick also used in the nearby Tour du Pape Jean XXII, thus establishing a direct link with the territory and with the city’s historic architecture. The characteristics of the material used to cover the building give it a monolith-like appearance against the texture of the façades obtained thanks to the alternation of voids and bricks, creating a play of shadows during the day and lights at night which, in turn, add a sense of lightness and transform the volume into a recognisable urban landmark. The second volume, covered in a gold-coloured metal aluminium skin, continues in this task, giving the sense of a building that leans against the first, of which it becomes the extension. The chromatic contrast between the light brick and the gold-coloured metal takes up the colours of the historic centre of Cahors and, once again, architect Antonio Virga makes a choice that emphasises the fact that the building belongs to the context, while at the same time firmly declaring its contemporaneity. 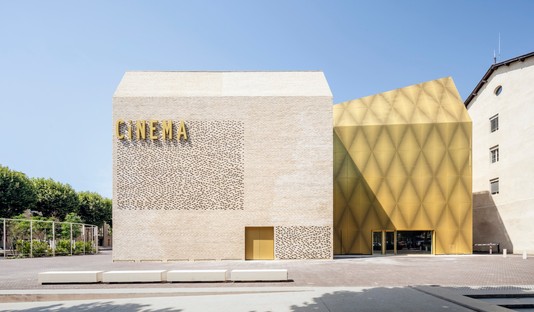 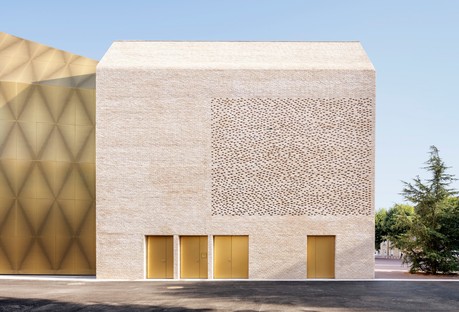 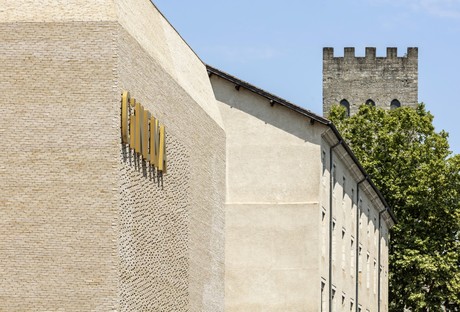 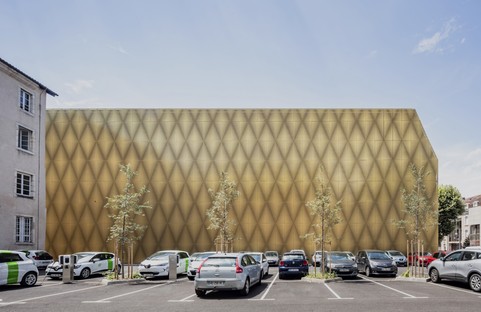 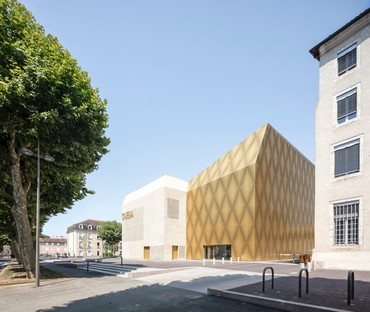 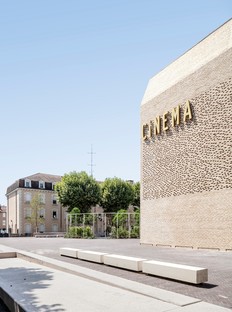 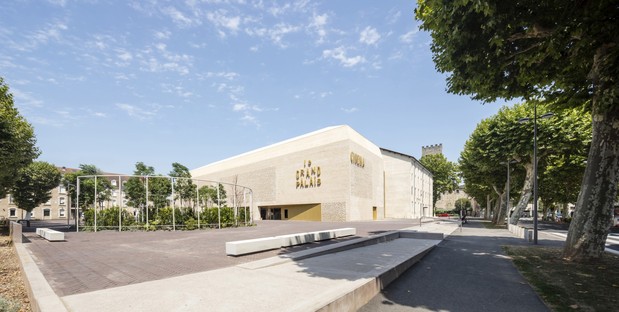 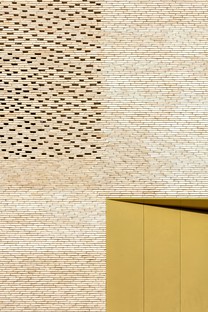 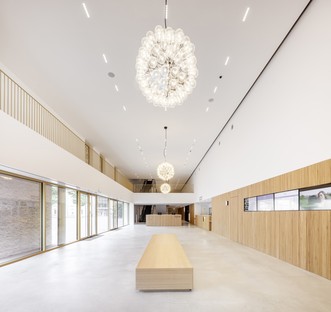 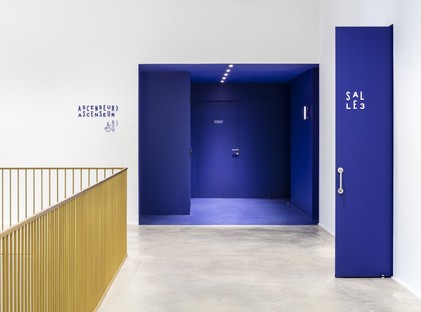 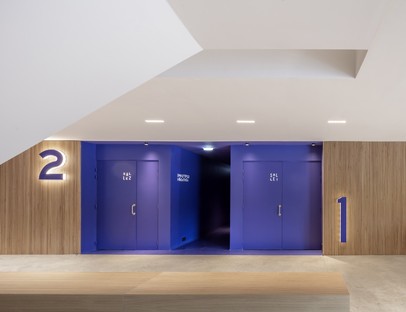 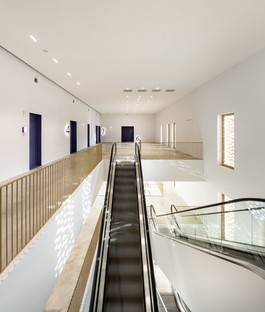 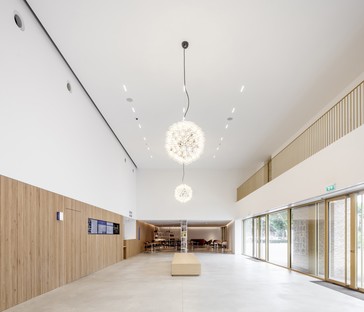 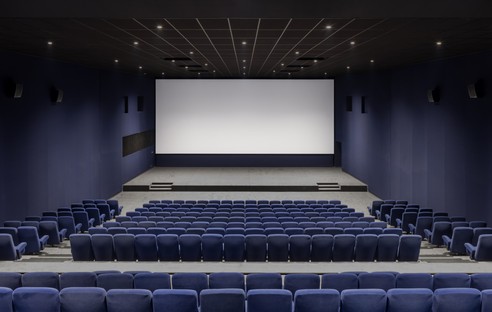 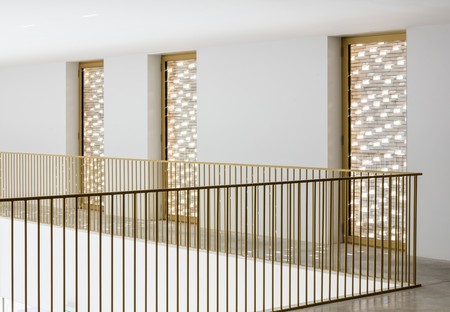 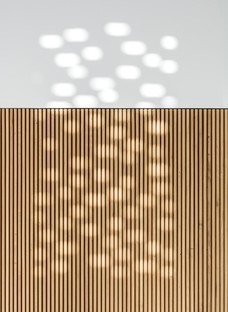 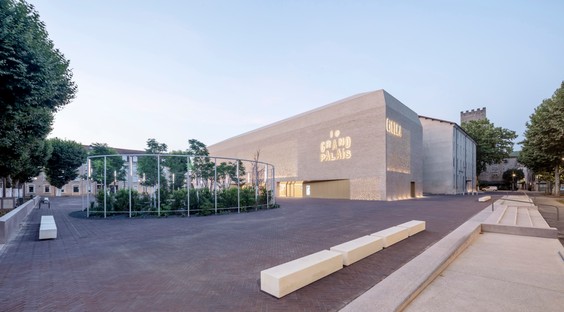 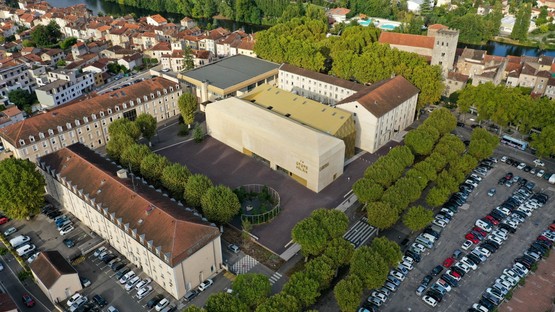 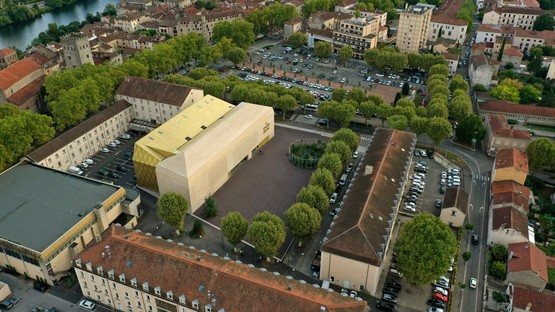 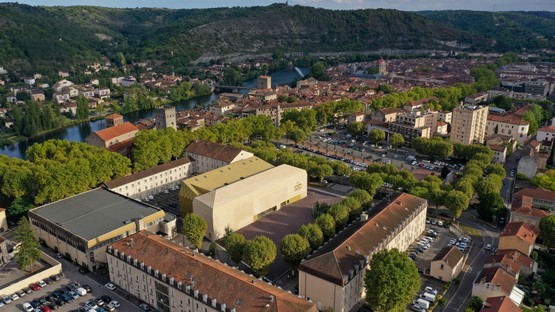 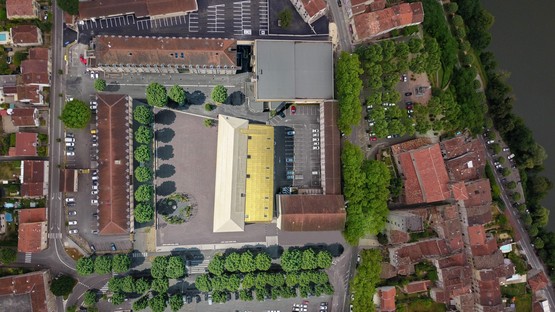 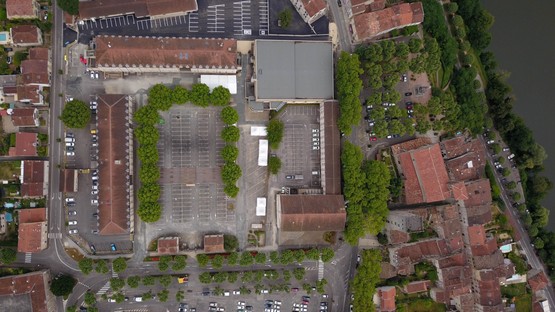