Daliana Suriawinata and Florian Heinzelmann, partners both in work and life, along with Tobias Hofmann in 2009 established their own-independent architecture firm, SHAU, operating in the Netherlands, Germany, and from 2012 also in Indonesia.

Their efforts in Indonesia are dedicated to preserve with small but extremely important interventions the character of a society at risk to be erased by aggressively inappropriate urban developments. Creative and original initiatives nurture their socially responsible architecture, while passive climatic design strategies and material experimentation characterize their environmental commitment. Together, they will share an extremely interesting project, contemplating a series of mini-libraries, spread through Indonesia, spontaneously growing as vital community’s gathering places within the poor neighborhood.

Simple and modest in size, yet surprising for their incredible ingenious versatility, they have been able to overcome even the greatest economic constraints, in order to bring people closer to culture, but also to offer an open space for encounters, life and activities’ sharing.
Several parks, as one of the most famous Alun Alun Cicendo, are part of their public interventions, all characterized by dynamic, multi-programmatic plans in order to satisfy the multiple demands of the collectivity at large. 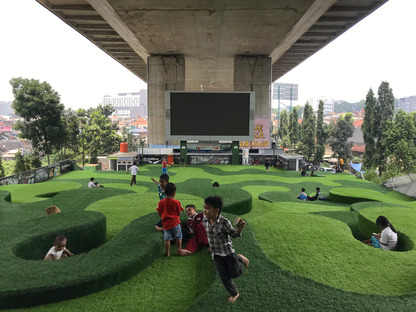