Lots of different places on a single site: this is how we might describe the importance of this social cohesion project by Dutch studio SHAU in Alun-alun Kejaksan Square in Cirebon, West Java, Indonesia. 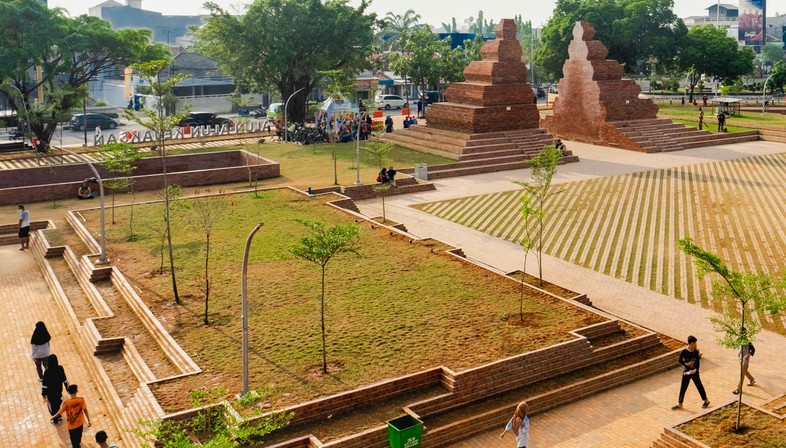 Active and well-known in Indonesia for their “100 microlibraries” project, Indonesian, Dutch, German studio SHAU, founded by Daliana Suryawinata and Florian Heinzelmann, recently completed the redevelopment of Alun-alun Kejaksan Square in Cirebon, commissioned by the Province of West Java. In Indonesia, an Alun-alun is historically an unpaved square, a sort of big meadow located by important landmarks in a city or village, such as a royal palace or a mosque. Traditionally used as a gathering-place for the population, for the Sultan to sit in state, or as a location for performances and fairs as well as public executions, over the years the term has come to mean simply a pedestrian zone, a place for gathering and socialisation, and an attraction for street markets and vendors’ stalls.
Alun-alun Kejaksan Square in Cirebon was a big meadow east of At-Taqwa mosque, surrounded by low walls and used by teams of young athletes for school tournaments, but also by the faithful as a place of prayer on the most important festivities in the Islamic calendar. The city government wanted a new square that would be more practical and appropriate for contemporary life, with a recognisable identity in the fabric of the city. Daliana Suryawinata and Florian Heinzelmann say the project was the result of a long process of discussion and debate involving civil and religious authorities, covering topics such as reconciliation of tradition with the contingencies of the moment.
The first highly significant factor in the redevelopment of Alun-alun Kejaksan Square was understanding and making up for the lack of order and functionality in the big green space. Seen by all as a green space with no particular fixtures, the square was not set out in a way permitting regulated use, which had over the years led to neglect.
The new project drew precise boundaries with a brick pavement, establishing clear relationships with the functions around it even without walls. Two main gateways were created, serving a symbolic purpose and ensuring orientation, one facing the city, on Jl. Siliwangi street, and the other facing the mosque to the west. Gapura Candi Benter is a reinterpretation of the traditional gateway to a monumental complex, an imposing symmetrical structure in which the two separate parts mark the transition from Gapura Plaza and the street to the ceremonial square. On the opposite side of the square is a gateway with five pillars gradually marking the route to the holy building, with the kinetic effect of a big curtain being drawn aside. The main axis of the project connects the two gateways, with areas for various specific functions on either side of it. 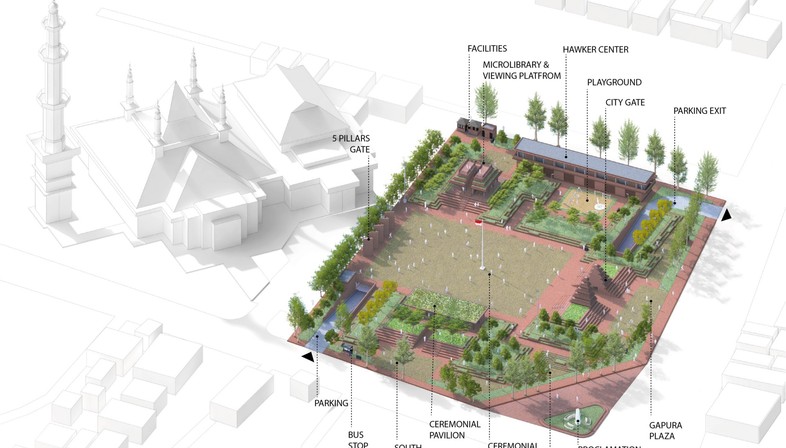 To the south, on JI Kartini, are two more little squares, the southern plaza with its ceremonial pavilion and the memorial plaza, built to pay tribute to the obelisk at the intersection with JI Siliwangi. The reincorporation of this monument to the resistance of the people of Cirebon against invaders, separated from Alun-alun Kejaksan Square due to the requirements of vehicle traffic, was among the client’s specific requests. As it was impossible to eliminate the turn-off on the road that cuts it off, the architects create a series of steps for the public and a celebratory space within the perimeter of the Alun-alun, so that the obelisk in the background becomes the fulcrum of the view. On the same side is a bus stop, with the entrance to the parking lot below the big square.
On the opposite side, to the north, are a children’s playground, a hawker centre for tradition Asian food-sellers, the exit of the underground parking lot and, lastly, a micro-library and viewpoint. The “100 microlibraries” project developed by SHAU for Indonesian cities aims to bring culture closer to people by building small, quickly constructed libraries in places where people are accustomed to gathering, even for purposes that are not strictly cultural, such as markets, fairs and places of entertainment. Micro-libraries in towns such as Bandung or Semarang always stand out from their surroundings, like the one designed in Alun-alun Kejaksan Square. In this case, brick is used to form a stepped structure which is consistent with the others around it, but topped by a viewpoint, multiplying its function to make it a centre of attraction in the square.
In short, two aspects of SHAU’s project combine all elements and functional areas, creating that bold, recognisable shared identity that ensures the success of a public space today. First of all, the choice of brick as total material. Brick was used to make all the structures, but also the pavement, making use of the chromatic properties of this natural material commonly present in the local architecture and still capable of inspiring a sense of belonging among the population. Moreover, according to the architects, this choice stimulates the local economy which is still based on the tradition of brick construction, creating jobs for local workers.
Then there is the greenery, in the form of the meadow and the plants in all the interstitial spaces. The overall image thus created is very much like that of old ruins, in which architecture and nature live side by side and create an ideal microclimate and quality spaces. Drawing on the familiar vocabulary of traditional monumental brick buildings, the functional elements surrounding and identifying the squares always feature stepped structures designed specifically to provide open-air seating from which to enjoy the landscape, ceremonies or simply the company of others. The resulting juxtaposition of spaces at different levels multiplies the potential for use of the square, creating a multitude of different places on a single site.
Open spaces in which to meet and be welcomed, places for spending time in different ways according to each person’s needs: a highly contemporary project in line with the conversion of riverside areas in cities, or whole pedestrian zones in green areas in Europe. A project in which people can recognise the international scope of a local form of expression that belongs to their culture. 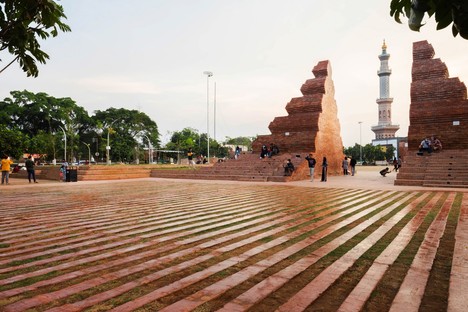 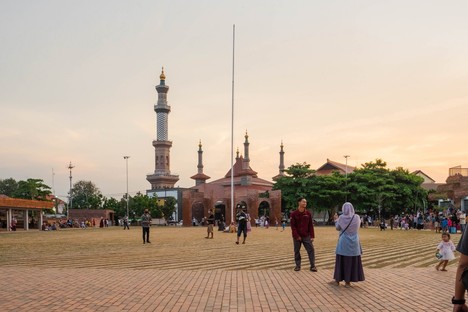 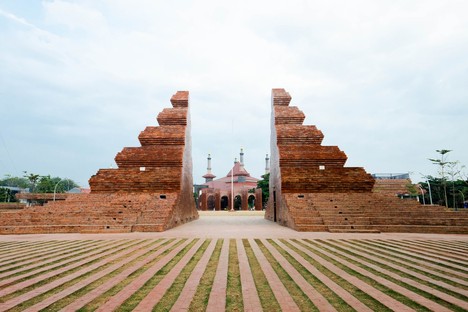 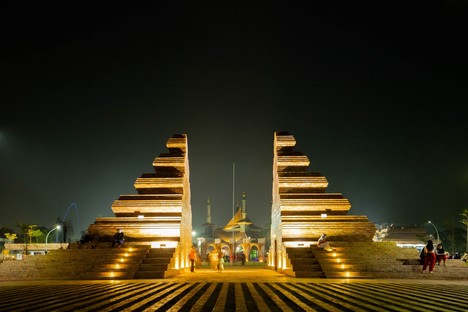 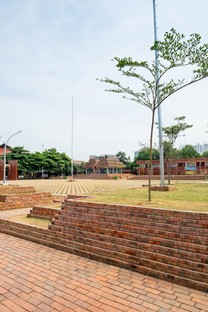 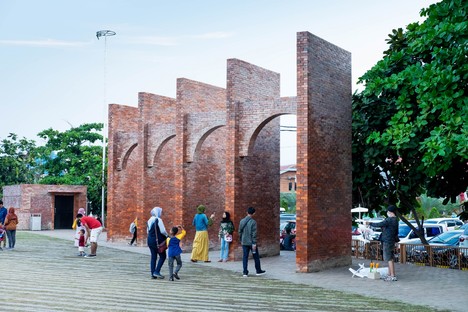 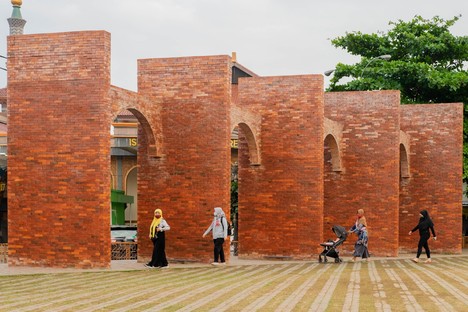 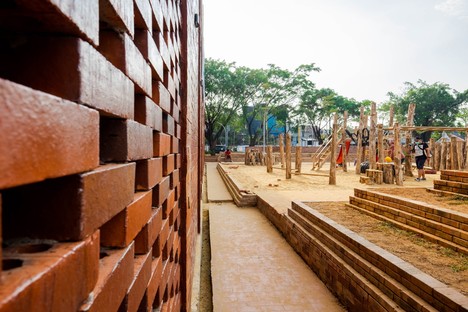 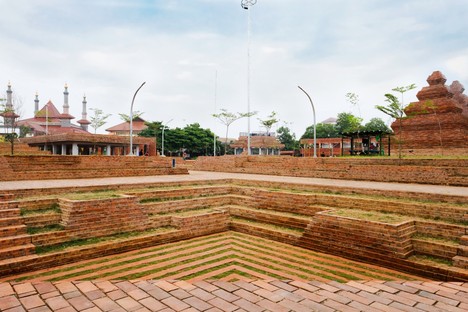 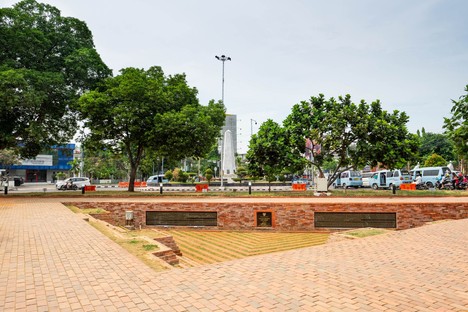 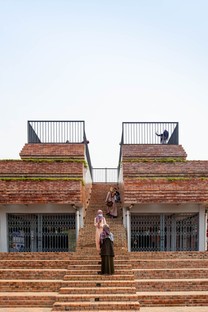 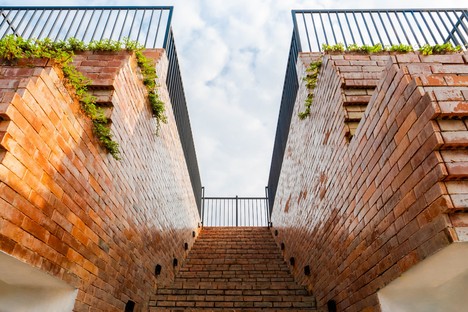 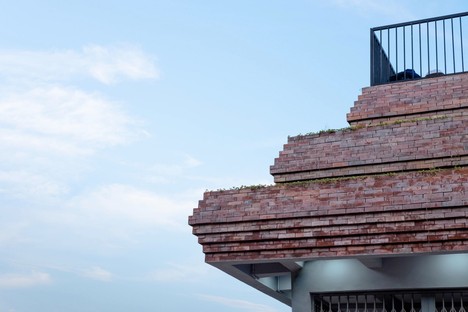 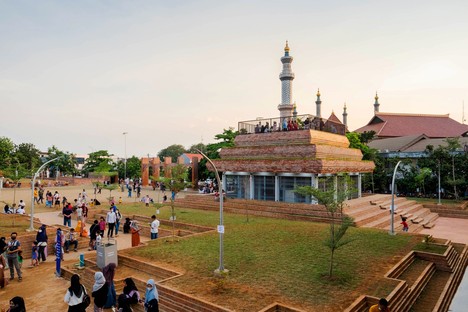 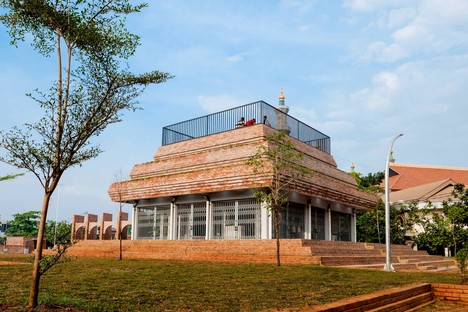 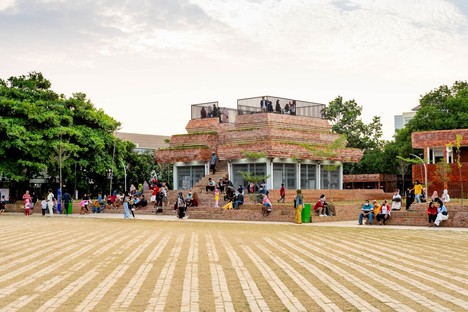 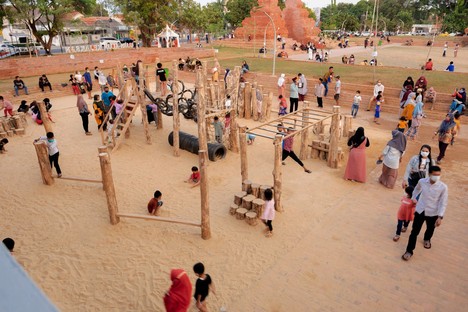 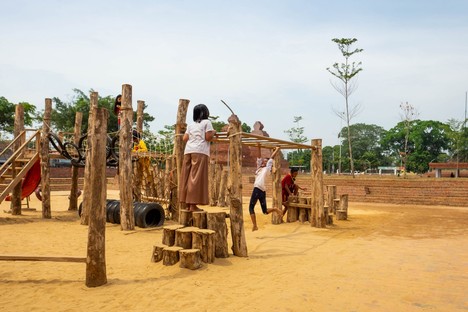 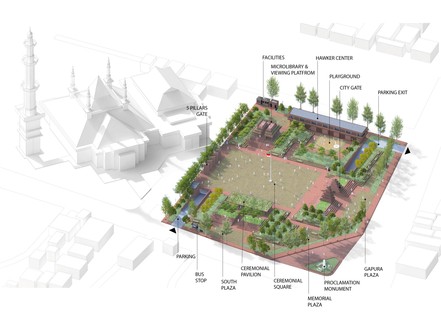 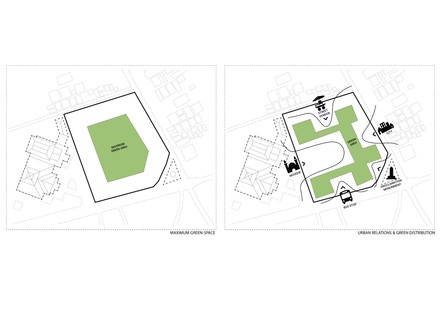 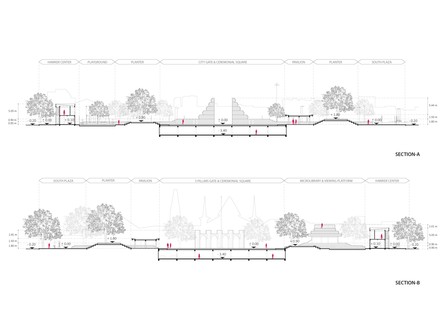 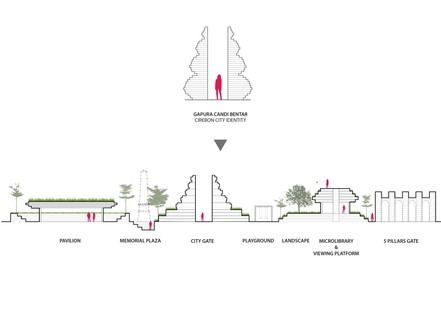