Architectural studio 5+1AA Alfonso Femia Gianluca Peluffo marked the 150th anniversary of the unification of Italy with a project for conversion of the H-shaped building of the Officine Grandi Riparazioni Ferroviarie in Turin.

The H-shaped building of the Officine Grandi Riparazioni Ferroviarie, a former railway carriage and locomotive repair facility in Turin, has been converted into a multifunctional space by 5+1AA Alfonso Femia Gianluca Peluffo architectural studios.
The structure, of great architectural and historical value, stands in an area which is currently undergoing a major transformation, and is ideally placed to become a centre of cultural and tourist attractions in the city.

The strong point of 5+1AA’s project is its characterisation of the two main courtyards on the basis of the idea of an "Italian piazza" with bold use of colour, and specifically the three colours of the Italian flag.

Green in the courtyard on Corso Borsellino, named "Piazza Popolare" and linked directly with the bar and restaurant, with the feeling of a village festival held in a country courtyard.
White for the few metal elements and the plaster sails, as well as the lights illuminating the building’s interior.
Redfor "Piazza Aulica", the building’s main entrance, where the architects also use black and white in pictorial and metaphysical elements: the black and white arrow on the red gravel (a direct citation of Osvaldo Licini), the ceramic anchovies (a work by Danilo Trogu). 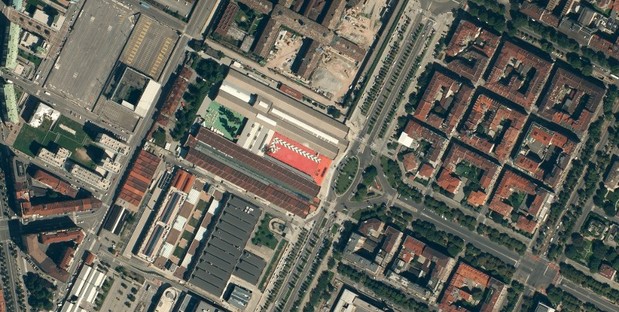