2b architectes: Apartments for the elderly in Sugiez, Switzerland

Having won the tender launched by the Coopérative d’habitation du Vully, 2b architectes has designed an interesting apartment complex for the elderly in Sugiez, Switzerland, with a particular focus on comfort. The three buildings in the park designed by 2b architectes have obtained the Minergie certification. 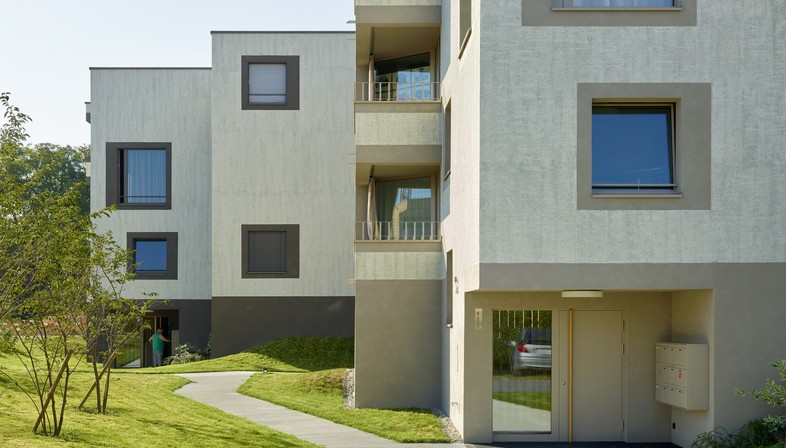 The apartment complex for the elderly designed by 2b architectes in Sugiez, in the municipality of Mont-Vully, Switzerland, was completed in 2018, but at the end of 2017 the first applications for the allocation of residences for citizens had already been granted.
Local history records that the need for adequate and affordable housing for self-sufficient elderly people had already become clear as of the early 1990s in this region. When in 2011 benefactress Marie Guinchard-Kilchenmann left an inheritance of 925,000 Swiss francs for the precise purpose of building accommodation for pensioners near the Home Du Vully retirement home, the municipality immediately seized the opportunity. To this end, and in collaboration with the Réseau de santé du Lac (RSL) - having been identified as the owner of the land - in 2014 the Coopérative d’habitation du Vully was established and made responsible for the construction and operation of the project.
The following year, the cooperative announced a two-stage tender for the design of the new residential complex. Fifteen firms put themselves forward for the job, four of which were invited to present a design on the basis of a call for tender and at the end of the process, the proposal known as Happy Days by 2b architectes was chosen unanimously.
The master plan is spread over 3 blocks of 4 floors each, for a total of 27 apartments, with common areas which are free to manage for meetings and other community activities, as well as a kindergarten. The site on which the buildings stand lies between the Sugiez train station and the retirement home. The greenery so prevalent in the area between the two lakes of Neuchâtel and Morat inspired the designers to set the new residences within a park with artificial hills made from earth taken from excavations brought to the surface. The idea is to create a new landscape that is the first sight to strike those who get off the train at Sugiez station. The new area offers a series of services designed for the weaker age groups, children and the elderly, such as safe walking paths which run through play areas and the retirement home, before reaching the town centre. As such, the main aim of building homes was combined with the aim of building a community.
The maximum height of the 3 buildings, set at 4 floors according to local regulations, has enhanced the residents’ relationship with the surrounding area, for example by allowing them to interact with the park from a window of the apartment. The proximity of the spaces has therefore allowed the users to feel that they are better integrated into the village itself. When distributing the apartments over three units, the designers paid particular attention to the relationship between the façades so as to avoid the monotony of identical and parallel walls, as has so often been seen in the history of these purpose-built blocks. Inside the site, the volumes are staggered and at a distance from one another, which has allowed for a permeable urban setting to be created. This has allowed for natural pedestrian paths to be traced through the artificial hills, as well as forming a sort of courtyard with a children’s play area to the west, a relationship which the retirement home also benefits from.
The blocks have been designed with the same internal layout across floors one to four, which are home to the apartments, whilst a different layout has been used for the ground floor, which holds the rooms of the kindergarten, or private spaces combined with rooms for meetings and parties. So as to meet family needs and different economic situations, each floor combines two 56m2 apartments with southeastern or northwestern exposure and a 79m2 apartment with southwestern exposure. These are joined together by a hallway which also includes a double-height meeting room or a laundry room, as appropriate. The interiors have been designed with great care despite the limited budget. The use of wood is maximised across the entire structure and for the interior finishes, except for the ground floors and hallways, which are made of exposed concrete.
In these common parts, peppered with wooden details, such as the handrails, partitions, apartment doors, doors and windows of the meeting rooms inside, the concrete is embellished to create a pleasantly domestic atmosphere; there is also no risk of it deteriorating with regular wear and tear as time goes by, as often happens to plaster. Thanks to a skylight and internal windows, the stairwell is particularly bright and large.
As for the interiors, special attention is paid to all the elements that have a profound effect on living comfort. Wooden floors and ceilings are left exposed in contrast with the plastered walls and grey doors and windows. The spatiality is fluid and compact, minimising the circulation areas. Each apartment gives onto the outside from two angles, never a single point of view, so as to offer the residents a more varied and complete view of the surrounding area. Abundant light enters the living area from the balcony with full-height windows, whilst the windows in each room are lower than the standard “so that residents can look out of the window whilst sitting down”, explains architect Stephanie Bender.
Naturally, all the apartments are designed for the needs of elderly people or those with disabilities, and a great deal of care and attention has been paid to the general quality of the space, as also recognised by the Minergie certification, the Swiss standard that guarantees the sustainability of buildings with a particular focus on the living comfort of the residents. 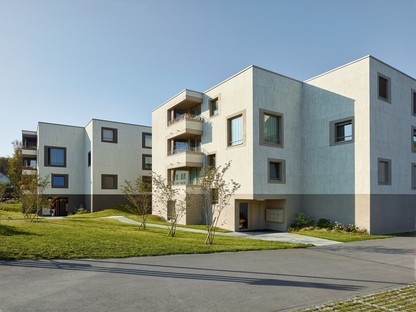 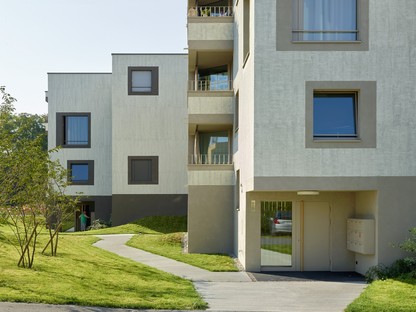 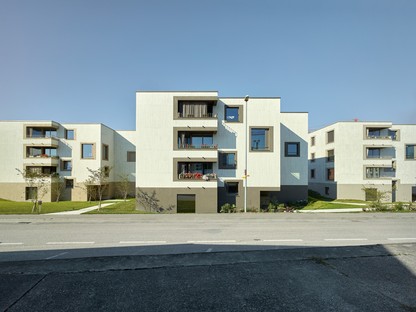 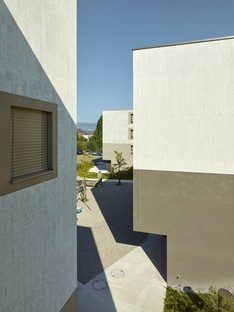 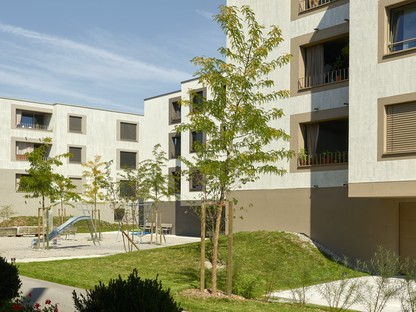 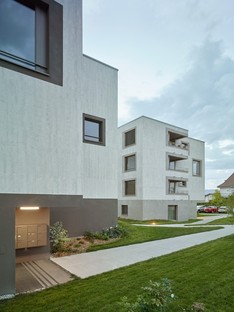 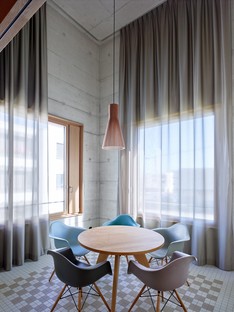 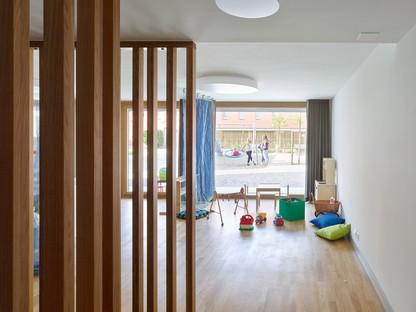 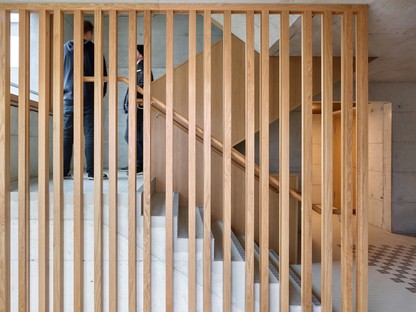 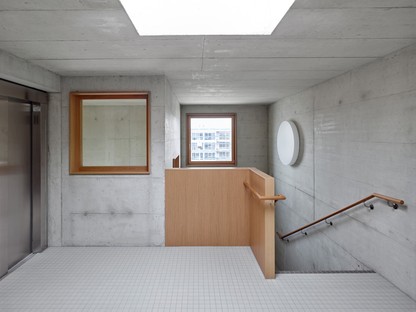 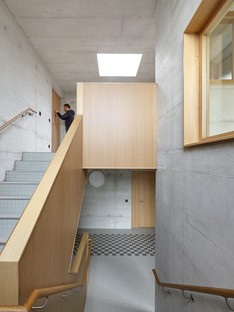 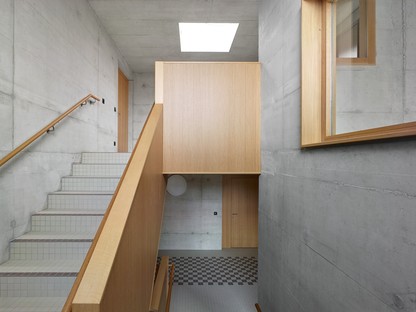 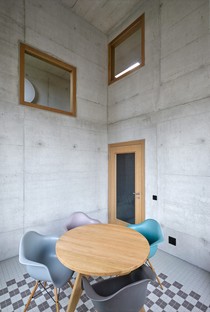 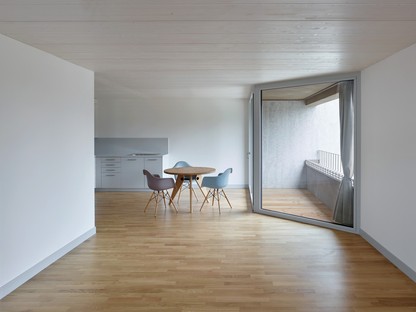 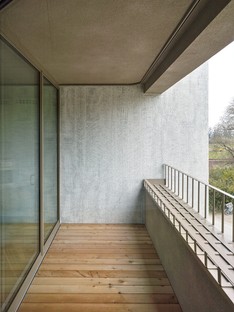 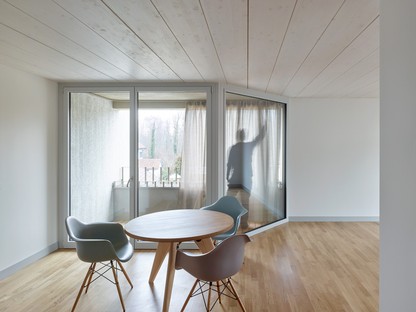 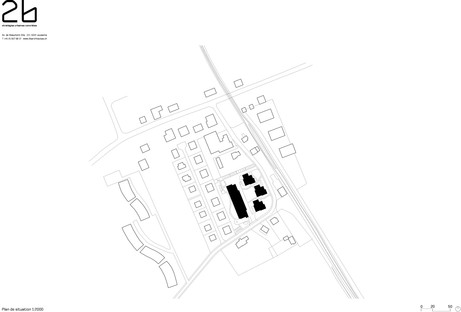 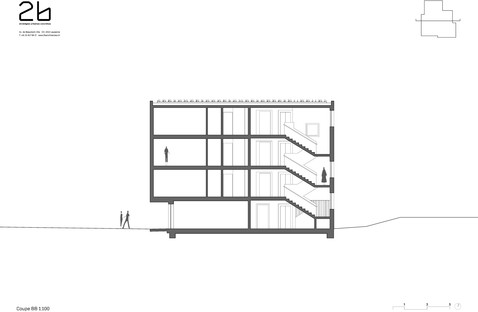 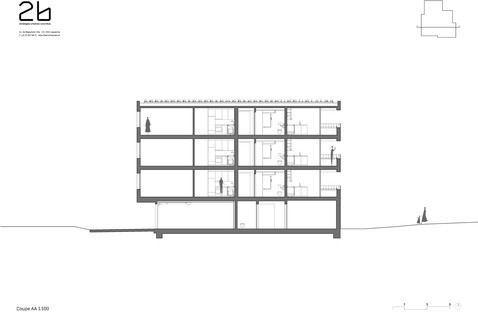 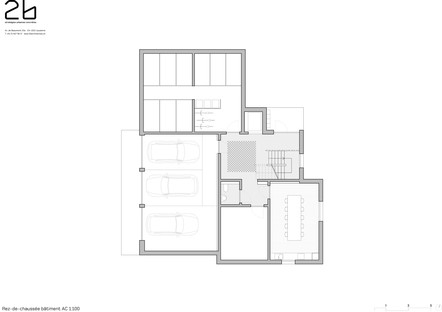 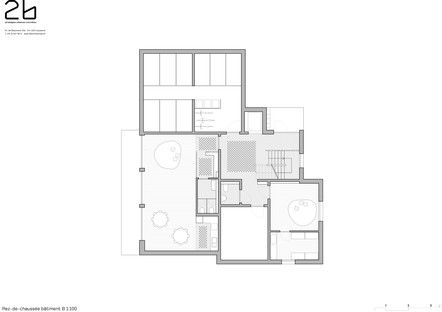 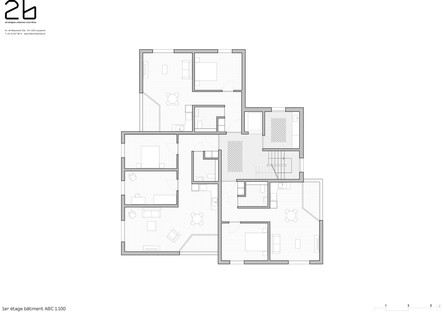 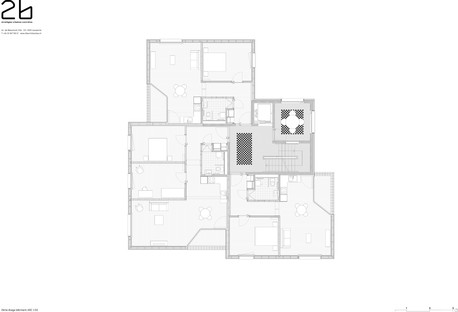 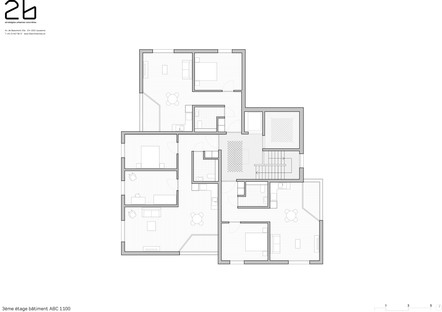