Cathrin Trebeljahr of In_Out Architecture is among the winners of the 2020 Prix des femmes architectes, for her expansion of the old prefecture of Versoix. Cathrin Trebeljahr reconciles architectural heritage with modern creation to create a new urban space in a project with Minergie certification. 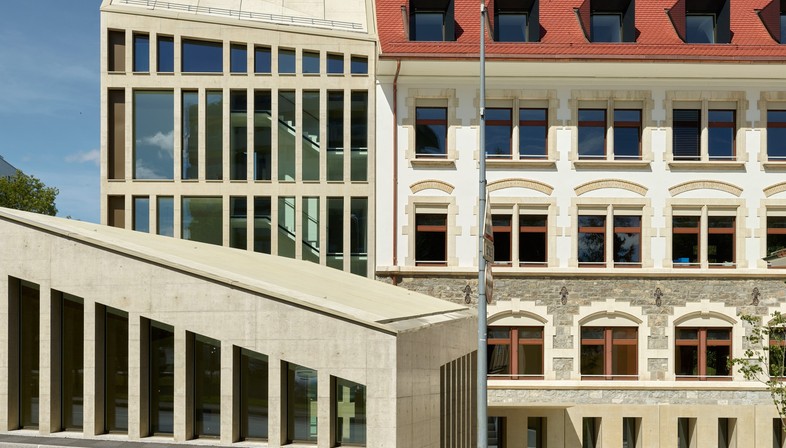 The redevelopment and expansion of the former prefecture in Versoix won Cathrin Trebeljahr the 2020 Prix des femmes architects in the Prix Œuvre Originale category. The commission appreciated the project’s ability not only to harmoniously restore a complex of buildings of different ages but above all to provide a new public space for the city.
The records of the Swiss municipality of Versoix indicate that the original construction, built around 1770 at the corner of Rue de Sauverny and Route de Suisse, has always been known as the Ancienne-Préfecture (old prefecture) even though it is unsure whether it ever actually was a prefecture. What is known for certain is that the adjacent Bon-Sejour school was built in 1910 and contained a Catholic girls’ school until the site was bought by the municipality in 1980. The initial restoration of the complex was approved in 1997; a second project, which has just been completed, was a decade-long process requiring careful attention in the treatment of individual volumes, interiors and façades of different ages and materials.
In_Out Architecture, in the person of Cathrin Trebeljahr, restored the unique features of each of the buildings on the site while at the same time encouraging interaction between them with creation of a central plaza and a series of paths converging on it. Winner of the competition held in 2016, the project was to redevelop the site to contain new functions: a dance hall, a music school, the Bon-Sejour school cafeteria, a games room, public offices and spaces for use by local associations. The municipality wanted the building to become a new civic centre with various connected functions, but the power of Cathrin Trebeljahr’s project goes beyond this. The project takes a sequence of separate volumes, which, like a stage set, trace a single path from the town to the school, and completes them with new buildings in the same style to create a new urban place, the plaza. Thus the old prefecture building is given a new extension to the west, where it had no windows: Cathrin Trebeljahr lets herself be guided by the lines of the stringcourses, the cornice and the windows in defining the features characterising the paired volume (the “Turret” ), creating a new row of buildings that accompanies the steps down to the school.
The historic meets the contemporary to create a powerful synthesis of opposites: masonry, plaster and stone vs. bare concrete and glass, and massive solidity, embellished with plenty of decoration, vs. transparency. The impact of the red roof dissolves into the cornice, which deviates, turning upwards to allude to the new staircase rising from the plaza.
The new school cafeteria located on Route de Sauverny maintains stylistic continuity with the Turret with southern and eastern walls scanned by an alternation of glass infill and thick concrete pillars, used as sunbreaks. Between these and the low building belonging to the original old prefecture complex, another staircase descends to the plaza: here, the effect of the lines opens up a green flowerbed in the concrete floor, identifying its centre and its public use.
The perfect scale with which these buildings are inserted in the site ensures that the hierarchic relationship between the parts is not lost, and everything encourages us to focus our attention on the façade with the red roof, which has always been the main building.
Its location lower than street level and the permeability of the project as a whole open up the project’s relationship with its urban surroundings. Without allowing time to determine its use, as is often the case, this restored, redeveloped and completely transformed complex is already identified as a citadel, a medina, an urban centre. Cathrin Trebeljahr might have had Alvar Aalto in mind, with his extraordinary ability to create places where there was no sense of community yet, as in Säynätsalo or Riola.
Lastly, the buildings use renewable energy only, in line with the requirements of the municipality of Versoix’s energy policy. The new buildings meet very high energy performance requirements, with the THPE label; while the historic buildings have been assigned the HPE label, also indicating a high level of energy performance. Their energy efficiency is improved by replacing the single and doubled glazed windows with thermically efficient elements and insulating the roofs.
Thermal improvement of the building’s cladding, implementation of two-way ventilation and fulfilment of thermal requirements with 100% renewable energy qualifies the old school building for Minergie-rénovation certification. 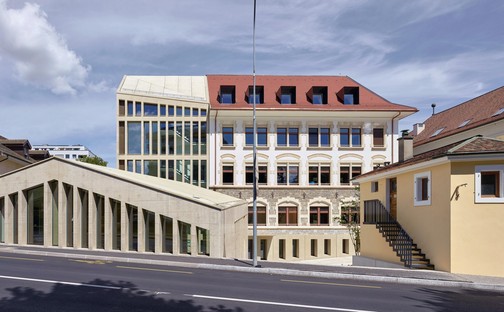 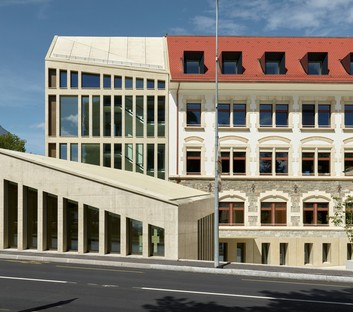 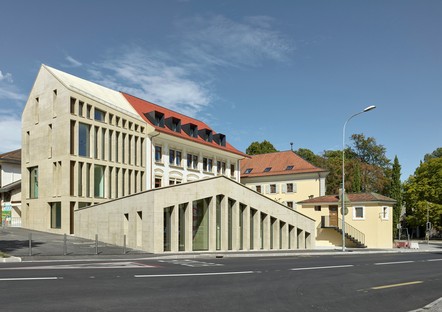 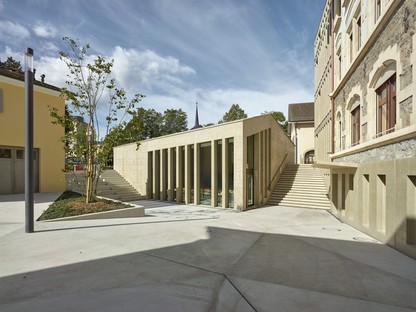 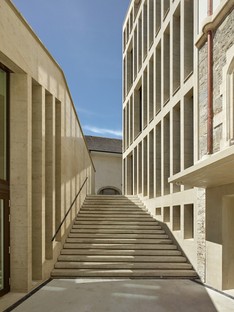 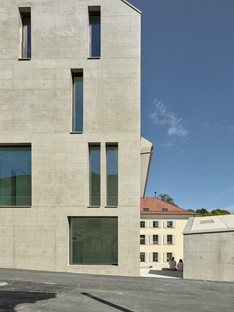 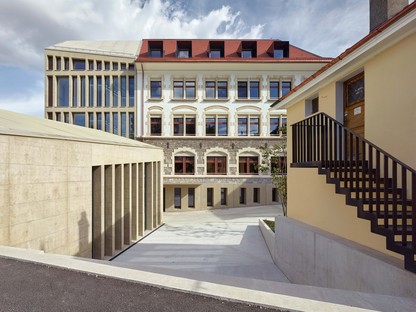 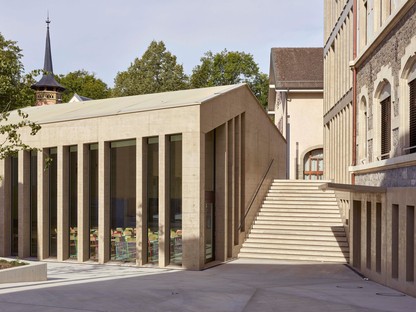 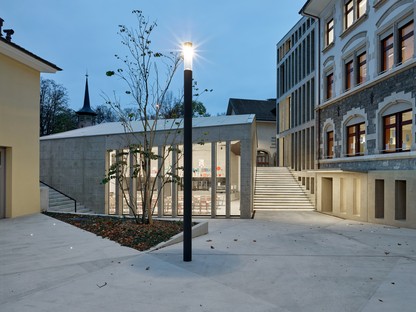 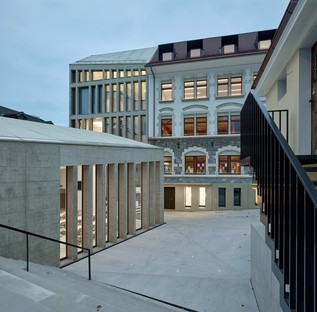 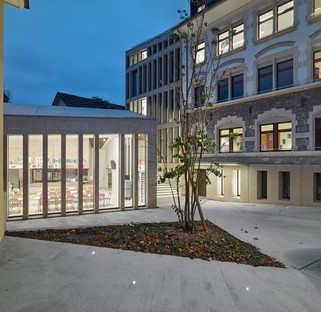 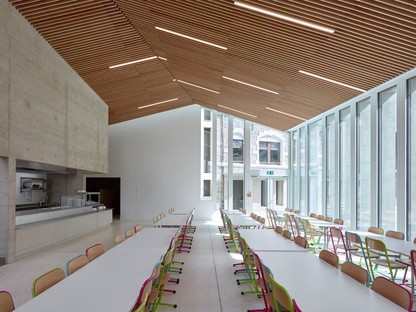 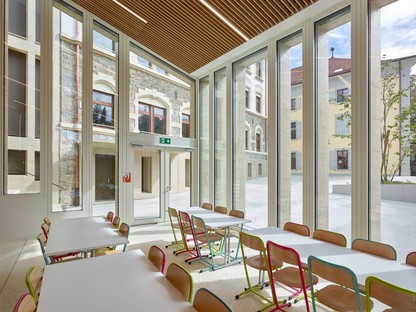 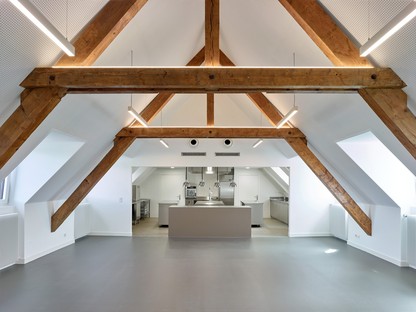 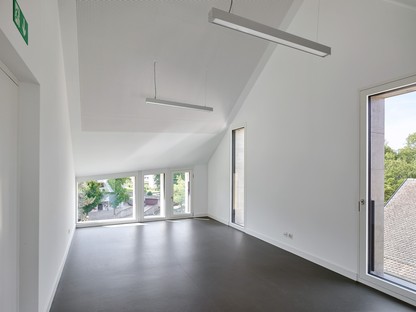 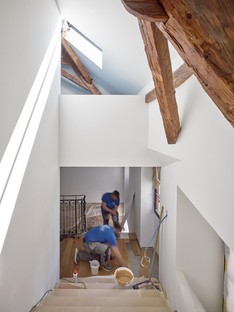 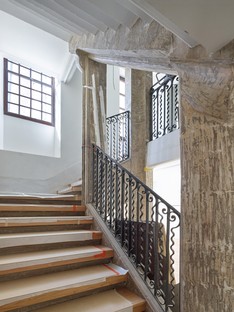 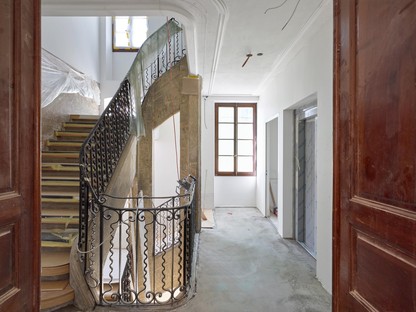 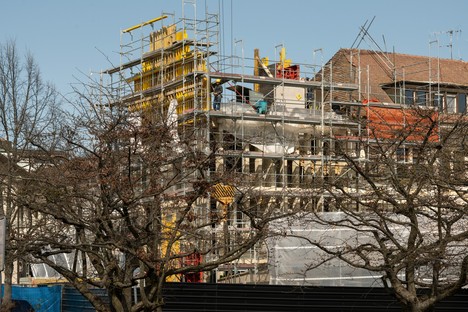 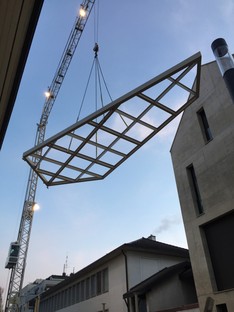 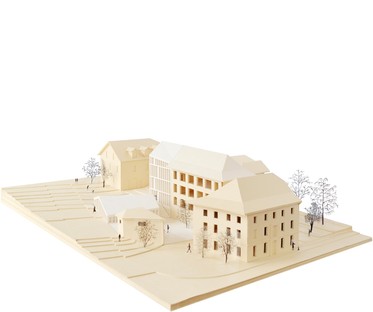 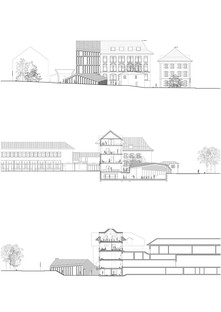 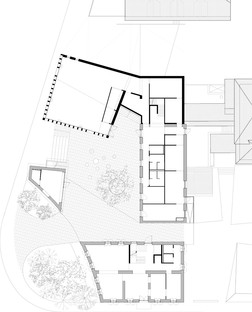 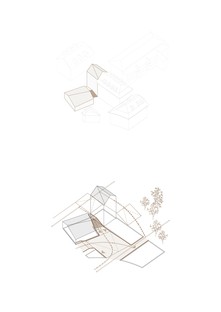 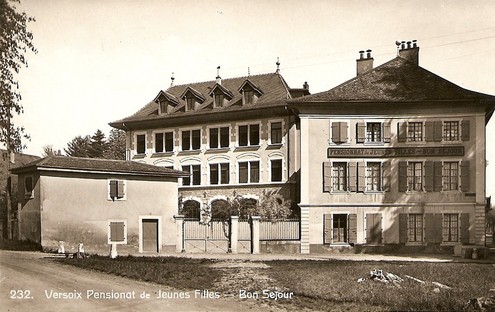 2b architectes: Apartments for the elderly in Sugiez, Switzerland