Tsingpu Tulou Retreat is a hotel designed by Trace Architecture Office in the ancient Tulou complex in Fujian province, in southeast China, an accurate restoration and conversion of the spaces in a tulou where entire families once lived. 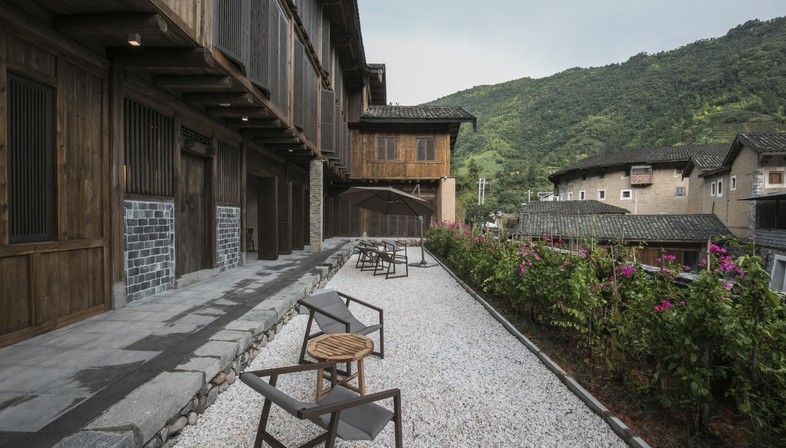 In the village of Taixa, in southeast China’s Fujian province, Hue Li and his studio, Trace Architecture Office, restored a complex of traditional tulou buildings and adapted them for new use as Tsingpu Tulou Retreat.
Still widely used as community and clan residences, the tulous of the Hakka people are a type of building which has been considered of inestimable value since 2008, when 46 tulou sites in Fujian province where granted the status of UNESCO World Heritage Sites, as "exceptional examples of a building tradition and function exemplifying a particular type of communal living and defensive organisation [in a] harmonious relationship with their environment”.
The architects say that the buildings involved in the reclamation and transformation project commissioned by the Beijing Origin Inn Group date back partly to the Qing dynasty and partly to the twentieth century. The complex, measuring 3700 sqm, is composed of three main residential buildings on two levels, one smaller building and annexed constructions, now gathered together in a single resort with public spaces on the ground floor and hotel rooms on the upper level.
Taixa is a mountain village surrounded by forests of bamboo and pine wood, with a river dividing in half the Tsingpu Tulou Retreat. Thus the landscape becomes part of the project, which is also concerned with redevelopment of the river banks, pedestrian walkways with wooden balustrades, stone pavement and tables like those originally built.
Tulous are constructions made of earth and used primarily for residential and defensive purposes, characterised by a circular or square floor plan arranged around a large central courtyard. Highly compact constructions with no windows on the ground floor, tulous have thick walls to keep heat inside in winter and protect the families living inside them. On the lower level were spaces for work and trade, opening onto the courtyard, while the upper levels contained lodgings, with open balconies running all along them that encouraged development of community spirit. The constructions had only small ventilation openings on the outside, as domestic life was oriented toward the inner courtyard, which symbolised the community or clan. In addition to earth, stone and recycled materials such as straw which were compacted for use in the construction of the walls, wood was the most commonly used material in the tulou, appearing in the window frames, shutters and balconies.
TAO’s project preserves the exceptional nature of this type of layout, which was reproduced for centuries in Fujian province, and restores it, replacing all the materials that have been damaged by time and reconstructing its functions with contemporary architectural signs, all while adapting the buildings to a layout that serves their new purpose and adding new, modern furnishings.
The project centres around redevelopment of the outdoor courtyard by the river, between two masonry volumes and a low annex, originally made entirely of timber. Underused and neglected over the years, with cast concrete and grass, the courtyard has now been repurposed as the centre of the hotel complex. Different types of pebble and stone flooring define pathways and lounge areas for hotel guests and the shrubbery is integrated into the space without taking it over. All the inward-facing walls have been renovated, bringing the original materials to light without losing the patina of time that demonstrates the constructions’ age and allows us to imagine the history behind them, even with a cursory glance. The annex has been completely rebuilt and transformed into an arcade, with a stone structure and roof and wooden inner cladding, now consisting of folding shutters. Lost details characteristic of this type of construction, such as the finely carved wooden decoration on the eaves, have been reconstructed.
The big courtyard provides access to the three main historic buildings through decorated portals leading directly into the individual courtyards. Some of the carved wooden shop fronts of the artisans’ workshops have been preserved and restored, while others have been demolished to create open covered spaces. The internal routes have all been transferred to the courtyard to allow guests to move freely about these shared central spaces. Extra partition walls on the upper levels have been knocked down and the building’s frame has been replaced where it had deteriorated, ensuring continuity with the original structure.
In today’s interiors, ancient structures such as the bays and façades overlooking the courtyard, abounding in detail despite their overall sobriety, maintain continuity with the rebuilt parts of the construction. One detail of particular aesthetic value is in the annex embracing the main courtyard: the L-shaped outer wall facing the river has been filled in with overlapping tiles which reveal only their smaller curved profile. Thus the wall appears to be composed of stacks of thin fragments, unrecognisable on first sight, which is what makes them so fascinating. A variety of different hues accompany the eye in contemplation of a façade with a surprisingly soft look, a detail of great beauty which underlines the presence and value of the contemporary architecture without creating conflict with the older parts of the construction. 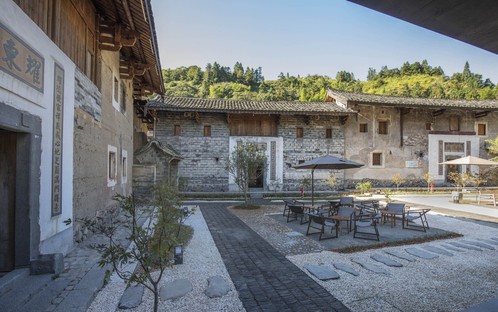 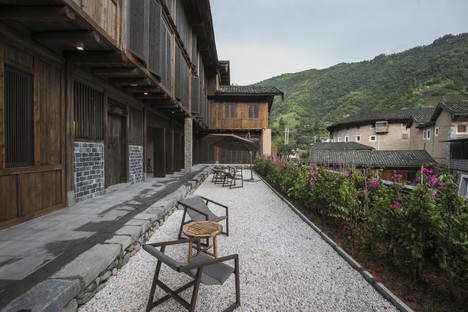 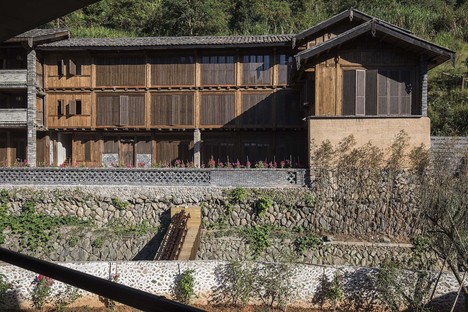 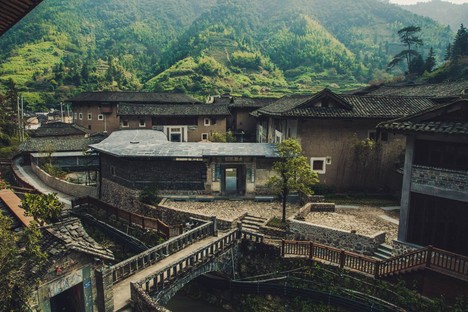 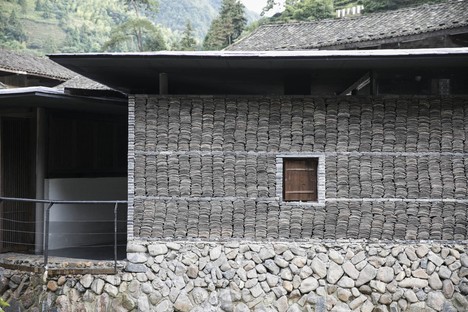 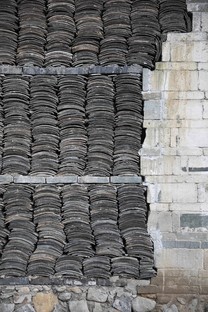 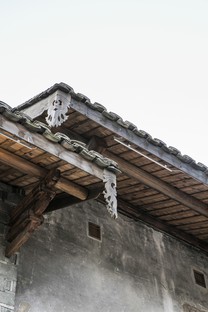 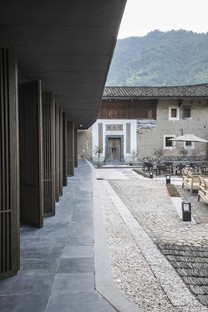 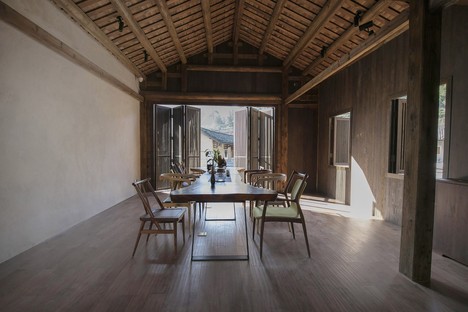 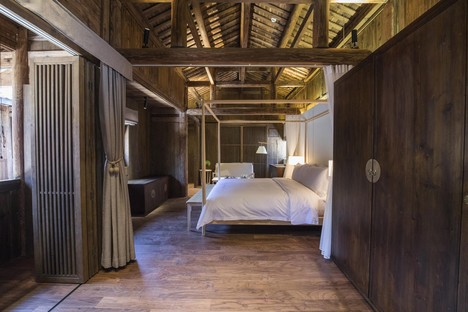 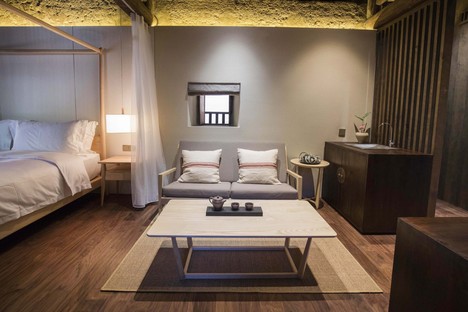 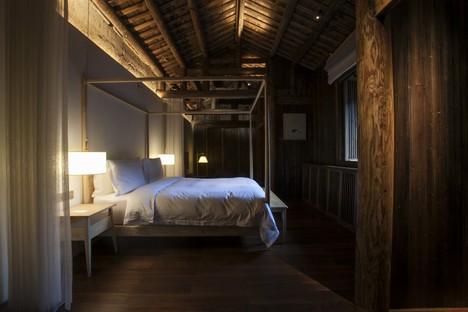 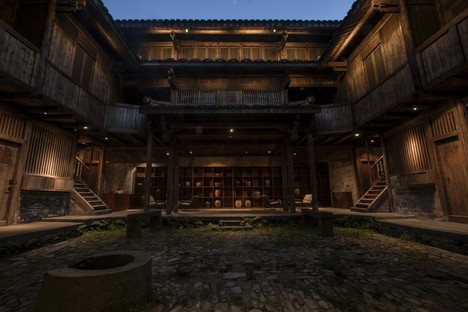 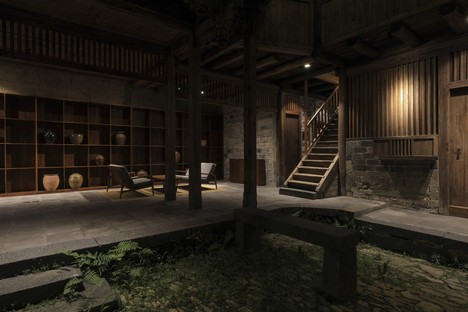 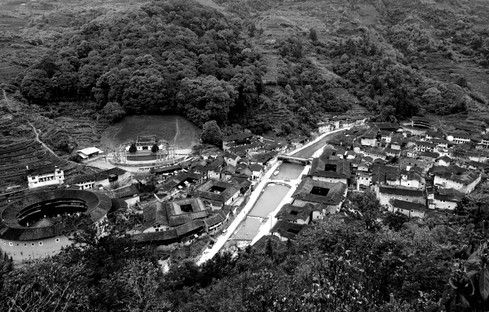 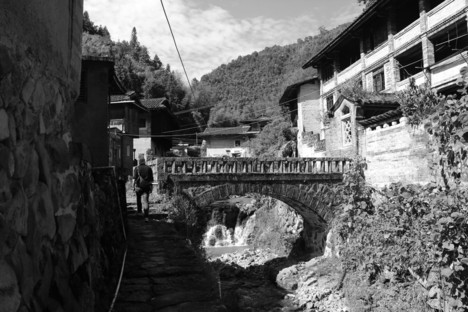 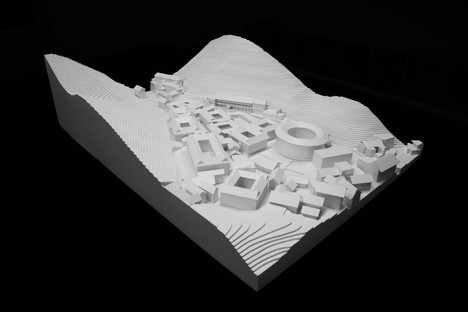 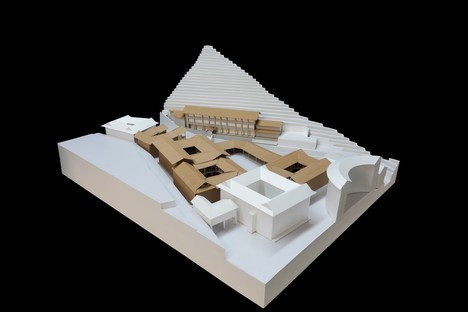 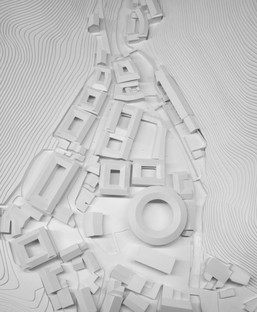 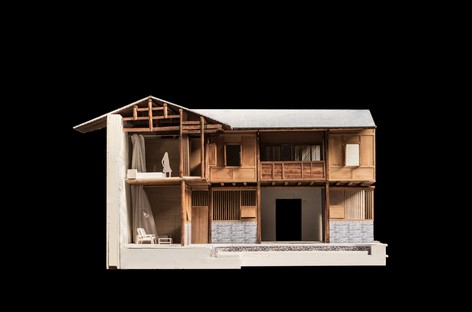 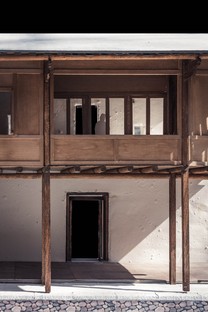 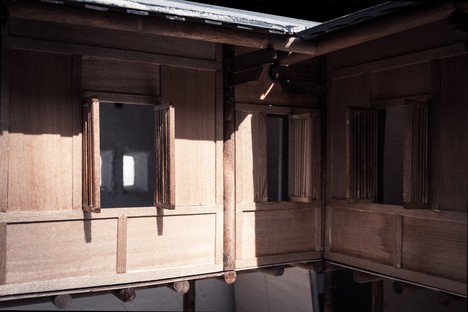 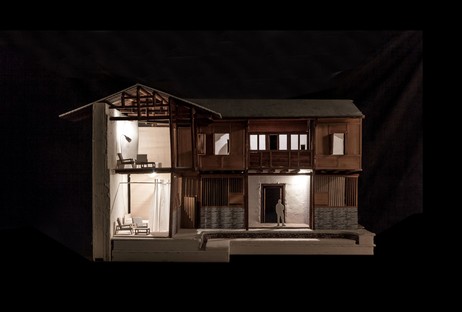 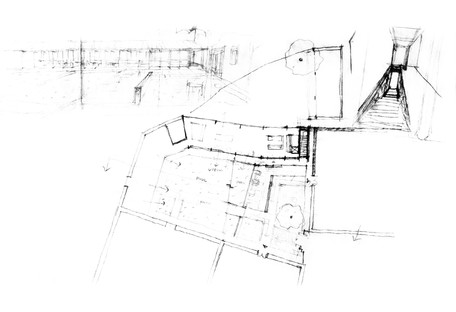 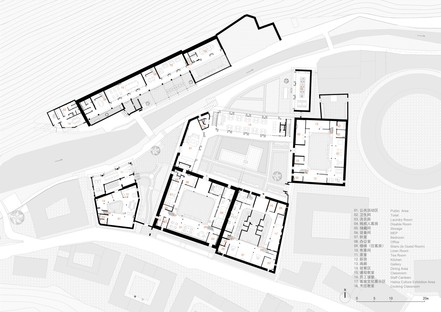