After having designed the primary school, Daniel Bonilla and Marcela Albornoz have created the Eureka Centre of the Anglo Colombian School in Bogotá. The Taller de Arquitectura de Bogotá has designed an architecture with kinetic façades and an oval shape, which expresses its vocation for research in the dynamism of the building itself. 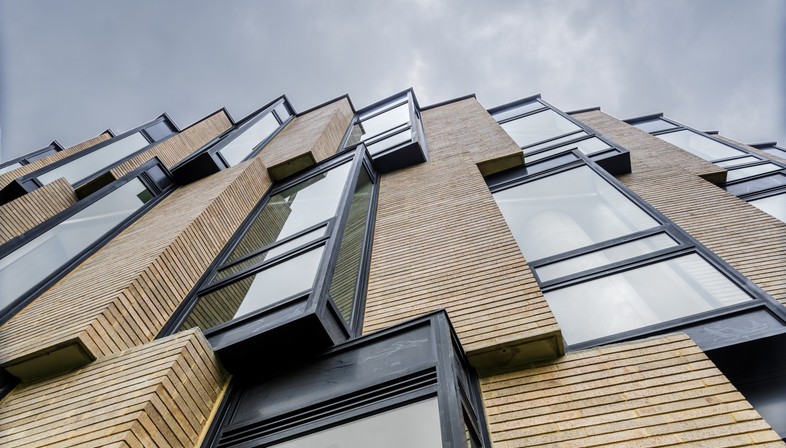 The campus of the Anglo Colombian School has been graced by a second project by the Taller de Arquitectura de Bogotá: a new research centre, the Eureka Centre, completed in 2017 after three years of work. The Anglo-Colombian institute in Bogotá is a bilingual school founded in 1980 which covers the educational journey from preschool all the way to the end of secondary school.
The initial contact with the design group founded by Daniel Bonilla and Marcela Albornoz, who were commissioned to create a classroom complex for the primary school, was established in 2015. The Taller de Arquitectura de Bogotá conceived the project as a vast and independent universe within the school area, made up of parts based on the classroom module which are then repeated with different orientations. The aim was to mimic the growth of a spontaneous village, featuring a central square as a meeting point and place for exchanges of academic inspiration. The alternating rhythm between full and empty spaces has always been at the heart of the Colombian duo’s reflections on the landscape, and this has been expressed with different formal results, including in its subsequent project, the Eureka Centre.

Located in Usquén, north-east of the centre of Bogotá, the Anglo Colombian School occupies a vast area with a great many facilities, such as the William Shakespeare theatre and different sports fields, in a markedly residential area. The scale of the architecture, generally quite small, with single-family homes on one or two floors or small blocks of flats, explains the architects’ decision to design a new building on just three levels whose impact and symbolism within the school and the wider community is dictated not by its towering profile, but rather by the rhythm and design of its façades.
With a very eloquent name, the Eureka Centre was founded to be the site of a research system into learning processes and promotes discussion on topics such as science, research and knowledge. As it overlooks the Avenida Sirena Calle 153, the long avenue that divides the area of the school from one of the residential neighbourhoods, the Eureka Centre has become one of the ‘faces’ of the institution in the city.
To this end, the building echoes the features of the architecture of the campus, such as the use of brick, in different forms, in the external paving as well as for the walls, yet it shows a much more dynamic formal articulation compared with, for example, the overall compactness and rigour of the primary school. With its oval floor plan and two main arched faces, which are nearly symmetrical in their vertical development, the architecture of the Eureka Centre can be taken in with a single glance from both inside and outside the College. Its overall presence, in the complex of juxtaposed volumes that makes up the campus, distinguishes it as a key and emblematic building for the school. Its identity is defined in part by its façade, the result of an alternating sequence of glass and brick modules standing at the height of the floors, which follow the curve whilst at the same time fragmenting it, dematerialising the architecture and increasing its kinetic effect.
Inside, each of the large classrooms offers the students a different viewing angle over the campus and the neighbourhood, just as Daniel Bonilla and Marcela Albornoz had earlier proposed at the San José kindergarten in Cajicá.
At the entrance level on the ground floor, the two curves approach each other at the ends without ever touching. This gesture opens up the thresholds of the building, informally presenting its access points, whilst also allowing for the surrounding nature to make its way inside, thus transforming the ground floor of the building into a public exterior. Indeed, anyone who enters will find a planted ‘square’, equipped with tables and benches in the same sinuous language of the curves seen in the architecture. From here, the true heart of the building, visitors can access the upper floors thanks to a large spiral staircase. The floors, parapets and furnishings echo the same earthy tones, inspired by clay and the extensive use of brick in the architecture across the campus.
All the classrooms and activities on the upper floors converge in this central space, which promotes shared work both symbolically and concretely. Non-orthogonal spaces designed for maximum flexibility of use have been implemented with mobile structures and furniture, allowing for the development of new programmes with tasks that vary over time.
At the two ends of the curves, corresponding to the entrances to the Eureka Centre, the projecting floors allow for moments of rest, as they are open but sheltered from the rain. Comfortable outdoor sofas round out their vocation as a space for welcoming and sharing. 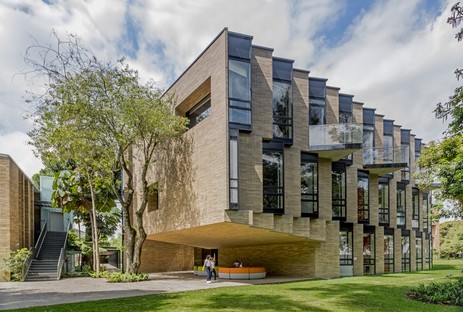 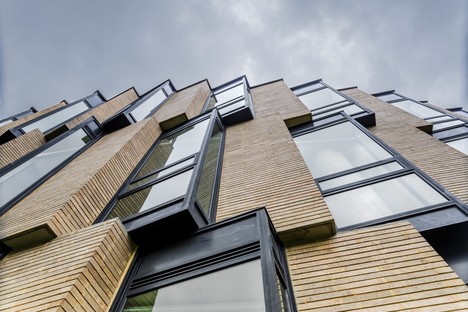 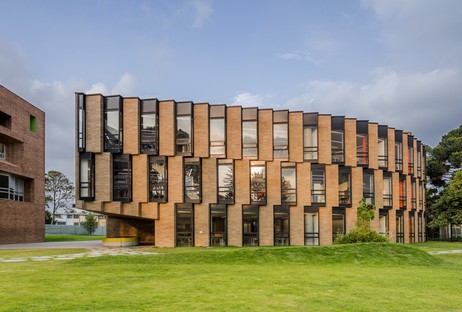 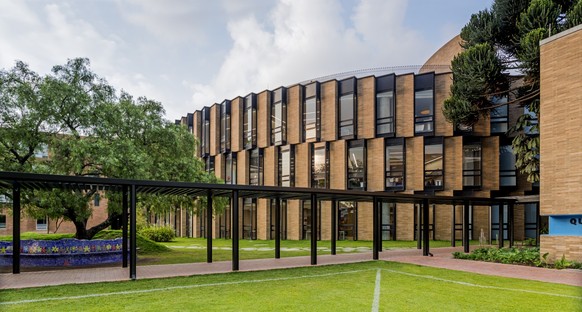 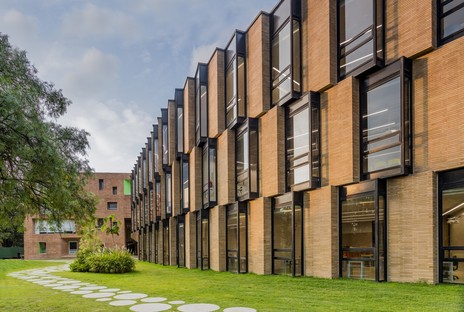 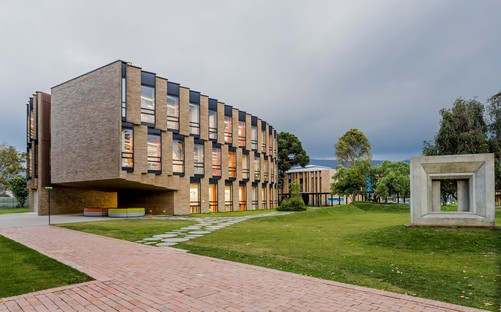 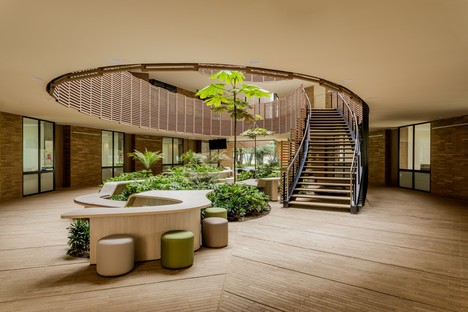 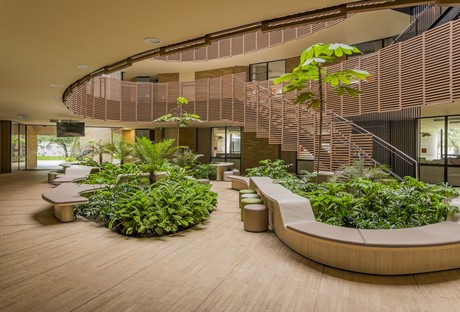 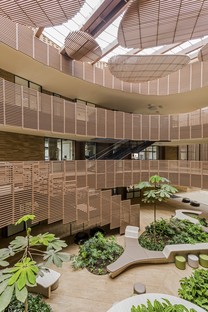 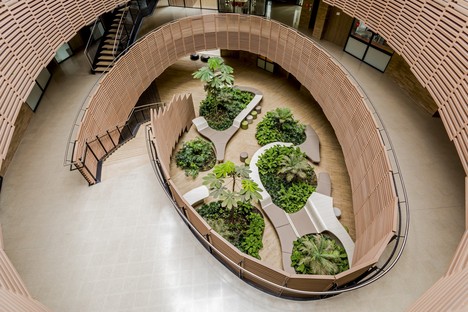 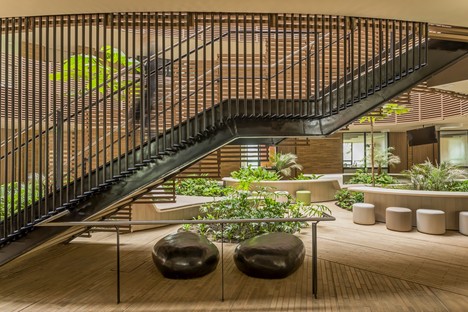 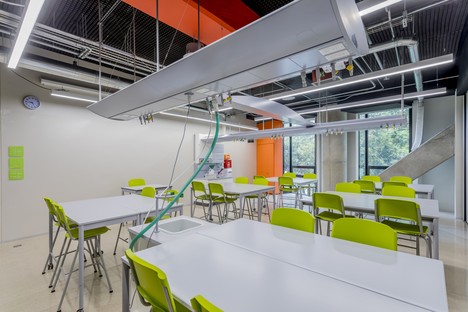 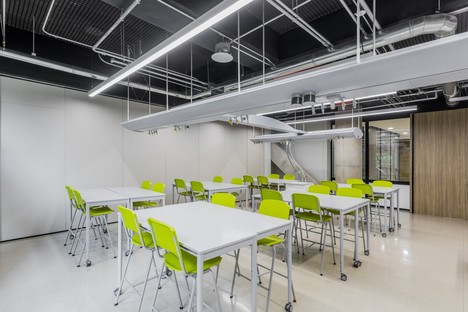 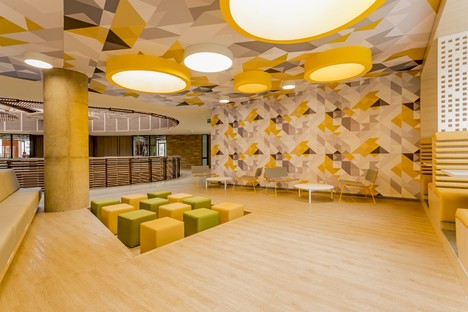 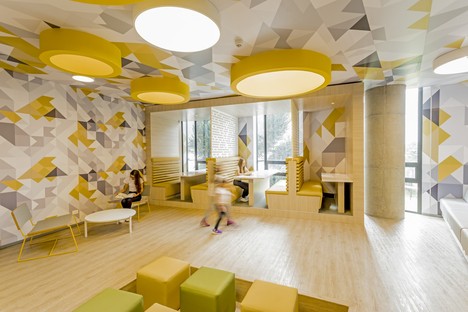 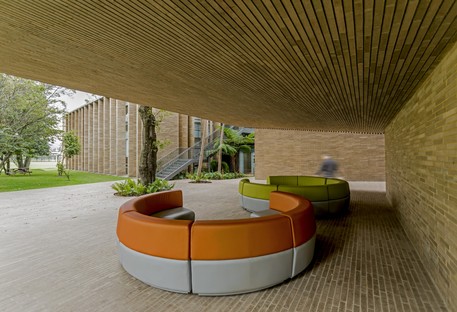 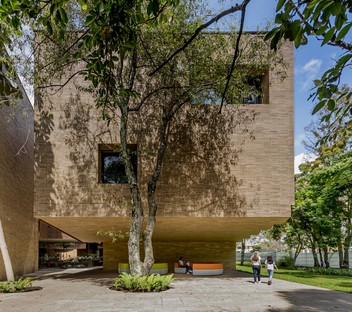 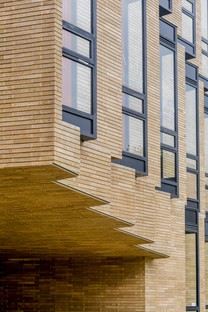 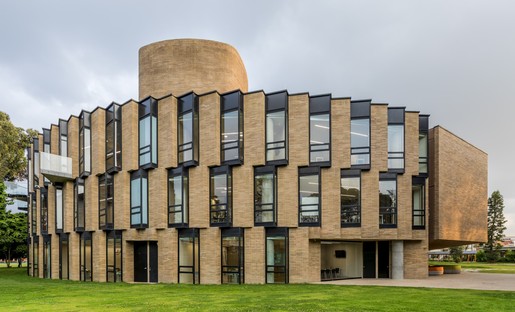 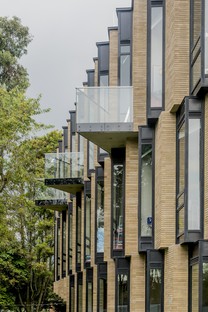 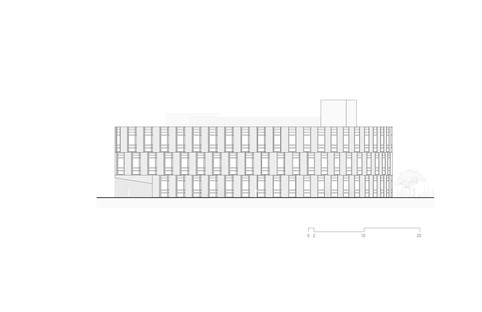 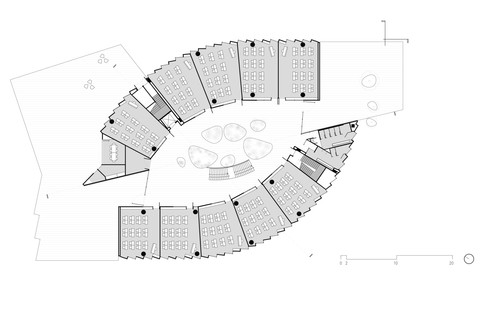 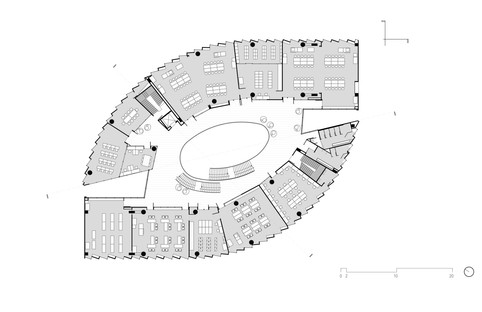