In Borrero House in Alosno, in the south of Spain, Jose Gómez Mora and Daniel Montes of Studio Wet work on colour as the element of relationship with the context and rethink the order of the façades. The detail of the main façade is inflected according to the curved lines beloved by Mora and Montes. 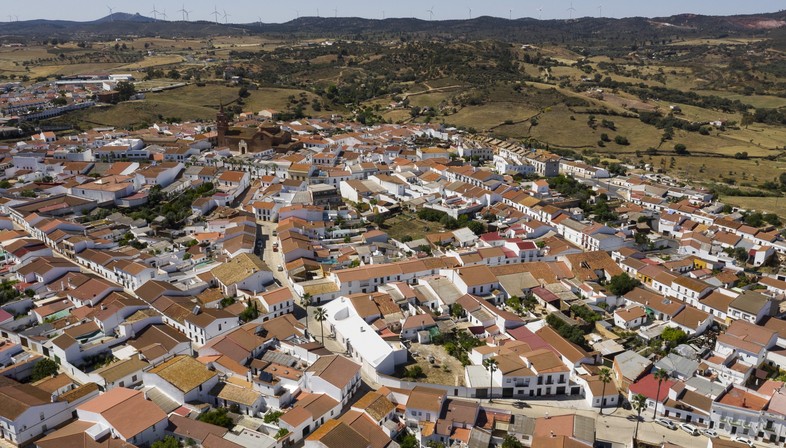 In Alosno, a small village in southwest Spain, Jose Gómez Mora and Daniel Montes of Studio Wet designed Borrero House, a single-story dwelling with unusual planimetric proportions. The peculiarity of the project for which Studio Wet was engaged has to do with the dimensions of the site on which Borrero House was built: a lot of just 7.5 metres wide by a full 40 metres long, added to which is a trapezoidal area of 11 x 5 metres at the eastern end. Clearly longer than wide, the site required a radical rethinking of the available space in relation to the street layout and the neighbouring buildings, a process that Jose Gómez Mora and Daniel Montes call “critical pragmatism”. The lot is situated on the corner of Calle Santa Maria and Calle Regajillo, at a point nearing the boundary of the village of Alosno. Its short side faces Calle Santa Maria, the street onto which all the entrances of the adjacent buildings face, while the 40-metre side faces Calle Regajillo, which in the first segment is a minor street, reserved to secondary accesses.
The observation of the context thus stimulated right from the start the need to invert what seems to be an unwritten rule on the importance of the two streets. The client’s need to separate the garage from the house led the architects to orient the spaces towards the longer side, i.e. towards the secondary Calle Regajillo, and to provide for circulation parallel to this street, along the more internal side of the lot. The garage was then positioned at the northwest corner, exactly at the intersection of the two streets, and consequently the side facing Calle Santa Maria, onto which only the garage door faces, is mute and secondary.
The entire house, instead, develops in relation to Calle Regajillo, starting from the courtyard that cuts the lot transversally and serves as an element of separation with the actual apartment, as well as the main entrance. The kitchen, the vestibule with secondary entrance and four bedrooms with bathrooms line up along the main façade, ending with a second small courtyard reserved for the master bedroom. The trapezoidal area to the northeast is used as an additional courtyard to provide light to the more internal bedrooms.
While the project makes use of the entire size of the lot in length and width, in height it stops at the first story, like many dwellings of the village and in continuity with the enclosure wall to the southwest. Despite these aspects, the visual emergence of the building with respect to a context made up of compact single-family residences is undeniable. However, the perception of unity is reassembled thanks to the care taken in defining the main façade and its chromatic continuity with the roof. Recovering a traditional local system of building, Studio Wet developed a double-layer structure of load-bearing brick walls, where the innermost layer is flat and plastered, while the outermost layer forms curves. The small shaped bricks, left exposed and perfectly finished, form thirteen curved portions that mark the long façade, giving it rhythm and order. Particularly interesting is the design of this detail, where the bricks meet the pillar that interrupts the curve and in correspondence with the corner of Calle Santa Maria and Calle Regajillo.
The bleached red of the perimeter bricks meets the pure white of the single pitch roof spanning from 6.5 to 7.5 metres high along the 40 metres length. Of particular value is the view from the top of the building, where the red terracotta floors of the courtyards stand out in the monochromic block. In the surrounding context of white walls and red roofs, this combination of colours highlights the building as a unitary nucleus with a distinctive character.
Curved lines, which return in the interior in the plan of the courtyards and in the terracotta vaults of the ceiling, are well-loved by Jose Gómez Mora and Daniel Montes. They can also be seen in the façades of Lissen House in Castilleja de la Cuesta, where a similar masonry design, though with bricks rendered with mortar, was used to clearly distinguish the original volume from that of the extension, creating a dialogue between them. 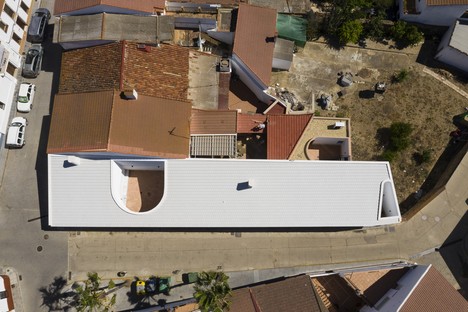 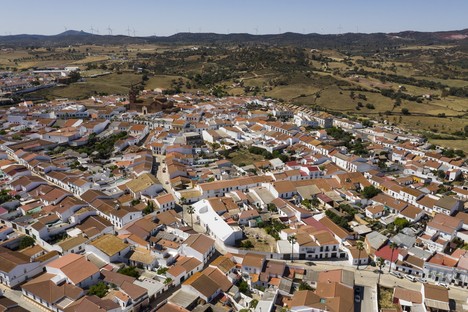 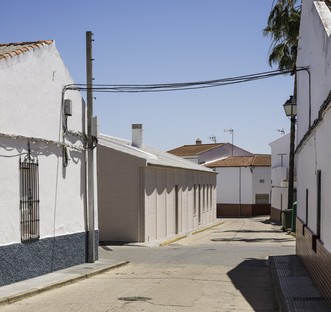 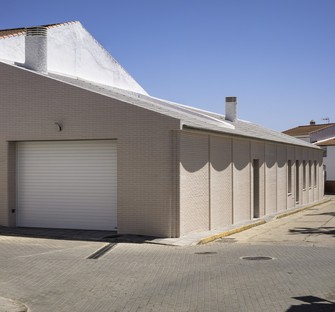 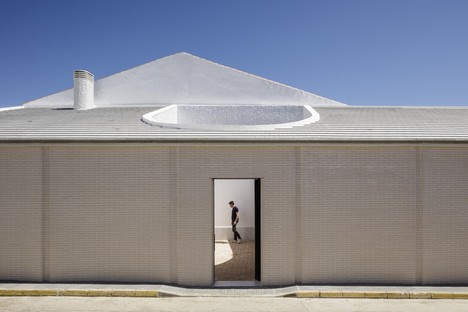 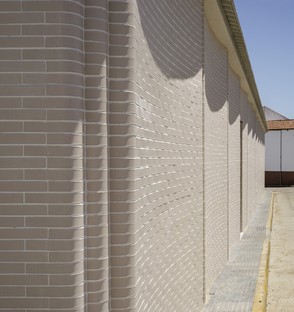 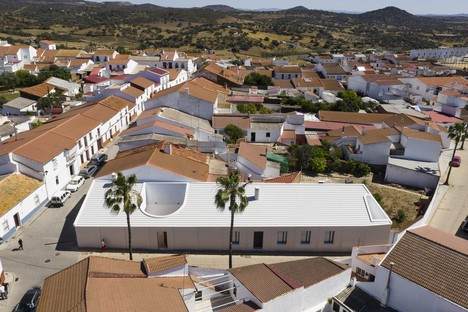 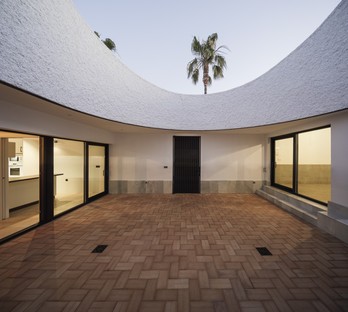 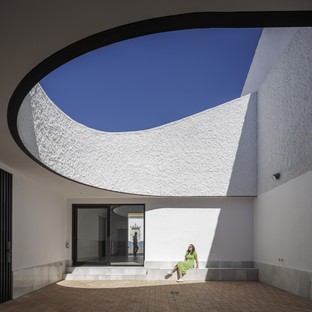 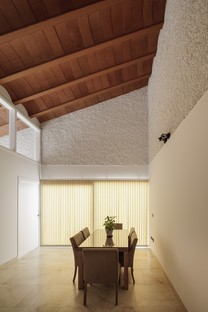 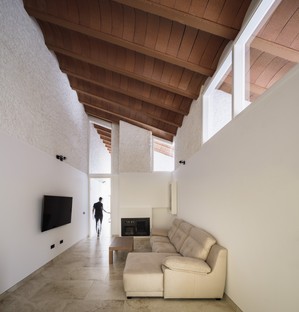 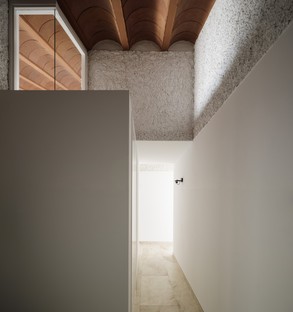 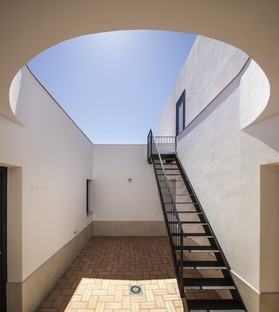 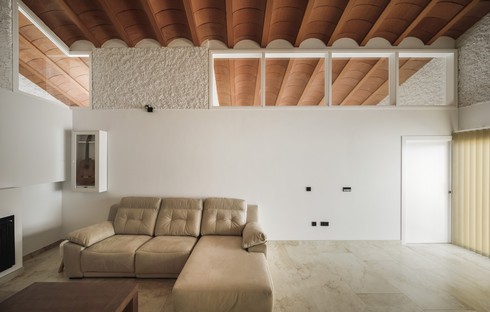 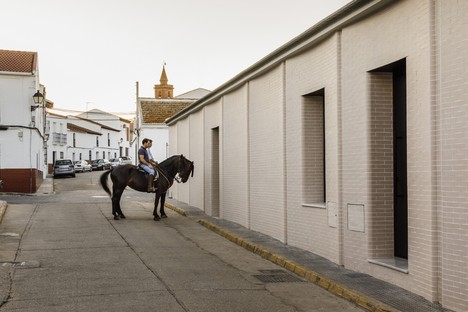 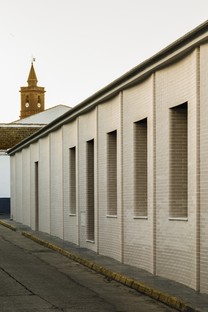 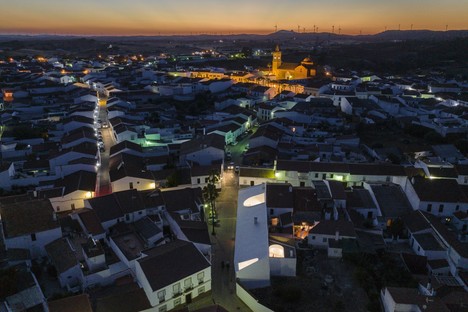 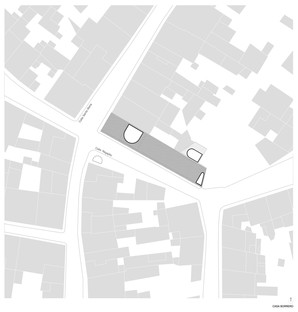 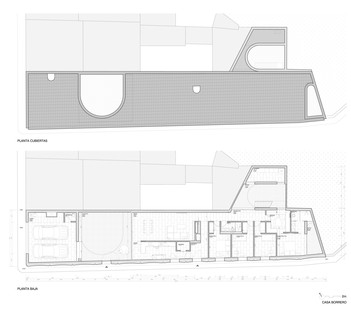 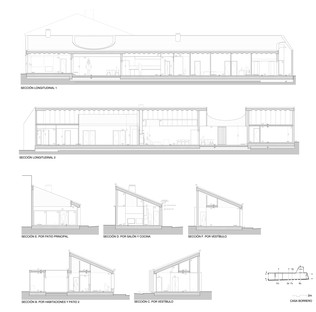 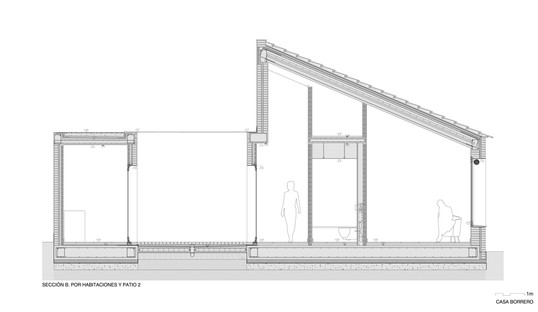 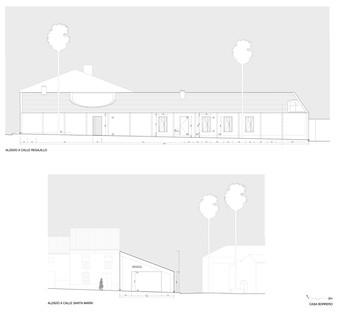 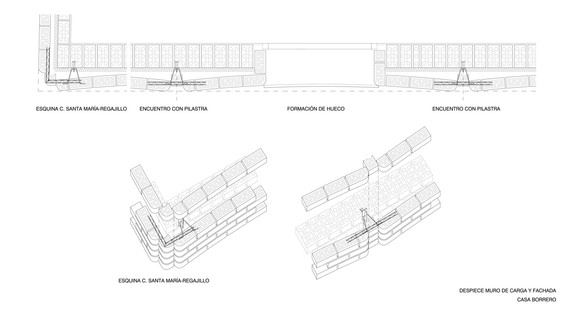