After six years of development and works, the White Tree in Montpellier was finally inaugurated in the presence of the group of architects who won the dedicated tender in 2013. With a very carefully-crafted design which is extremely innovative in both form and technique, Sou Fujimoto, Nicolas Laisné and Manal Rachdi successfully earned the paternity of the new and most important piece of contemporary architecture in Occitania. 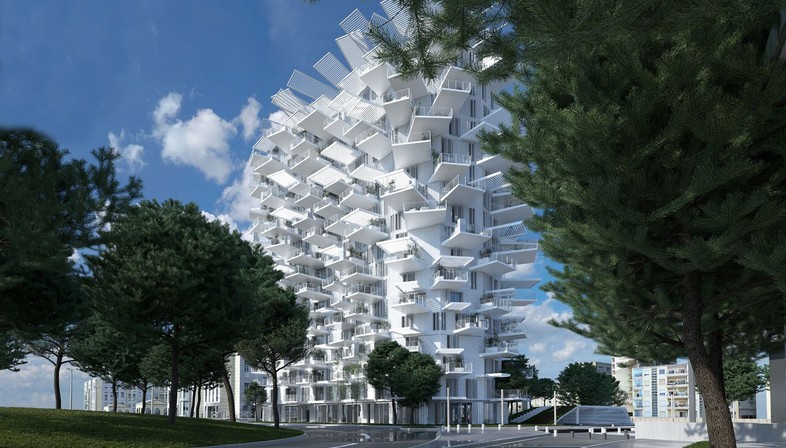 In 2013, the city of Montpellier launched the “Folie Richter” competition, whose aim was to identify the best design for a large tower capable of enriching the architectural panorama of the city. The briefing clearly demonstrated the desire for a bold project, capable of combining residential and commercial spaces and put a team of young architects to work in collaboration with a more experienced and well-known figure.
These requirements were met by two up-and-coming young architecture students, Manal Rachdi and Nicolas Laisné, who captured the interest of Sou Fujimoto, a famous architect based in Tokyo. In order to get the Arbre Blanc project off the ground, the architects went to Tokyo for five days and, cutting themselves off from the outside world, designed the tower, its atmosphere and its identity. Afterwards, throughout the whole summer, they continued working closely with Fujimoto’s Japanese firm.
“We re-emerged from this unusual and exceptional phase with a very strong concept that contained all of the primary intentions of the project,” explained Manal Rachdi. Nicolas Laisné went on to say: “It was a Herculean task. The concept was so well thought-out that once the Arbre Blanc was built, it was quite similar to the initial models, both in terms of form and – above all – of its large outdoor spaces, an idea we immediately agreed on, after having told Sou how the people of Montpellier live.”
To the question: “why did you seek out Sou Fujimoto in particular?”, Laisné and Rachdi replied: “All three of us draw inspiration from nature, but we express it in entirely different ways. On this project, a common ideological foundation and three different sensibilities would have led to the best possible result, all enriching each other. I am a great believer in intercultural dialogue, which can only add value to this candidacy”.
In retrospect, we can say that that was exactly what happened.
What really made the difference in the Arbre Blanc’s victory over the other projects was its design. The three architectural firms started from the idea of the tree, the sinuous and organic form par excellence. So in this case, the balconies, like branches protruding from the trunk, protect the façade with their irregular shadows.
The poetic power of the project is also reflected in the attention to the technical and energy-related aspects. The ventilation, for example, which is extremely important in this southern Mediterranean city, is intrinsically linked to the shape of the building and its projections. The minimum surface area for the balconies is 7m2; the largest, however, with a projection of 7.5m, measures 35m2. Such an extreme size not only constitutes a world record, but also helps with air circulation, acting as a windbreaker and creating cool areas of shade. At the same time, the balconies - with the way they extend outwards like leaves towards the light, combined with their generous size - make for a strong invitation to live in the open air. A matter whose importance cannot be overstated in a city which is bathed in sunlight 80% of the time. Plus, the view - especially from the seventeenth floor - must be quite something to behold.
For the designers, the focus of the project was the human dimension. As such, the public and commercial areas are located both at the base of the tower (with large windows which overlook the neighbourhood) and on the top floors, where residents, clients and citizens alike can all enjoy an impressive view of the city. In addition, the types of businesses open at the two ends of the tower make the public intent of this building quite clear, thanks to the presence of art galleries, bars and a rooftop garden with breathtaking views. All of these spaces, being adjacent to the park on the River Lez, invite citizens to become an active part of the city’s urban development. And they can do so by making the architecture their own, providing it with an injection of life.
The architects themselves are also aware that it is only in this way that the Arbre Blanc will earn its place as a historic architectural landmark, fully experienced by the local population as a shared property. Indeed, for Sou Fujimoto, Nicolas Laisné and Oxo Architects, it is only by inhabiting architectures that they can truly become alive and memorable, a tourist attraction and an object of pride for the community of Montpellier. 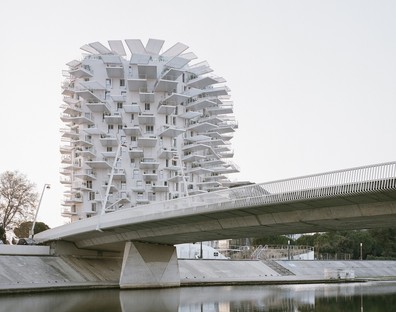 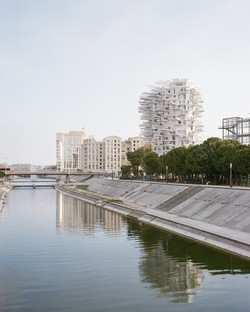 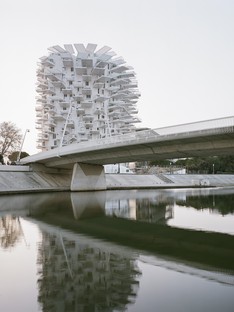 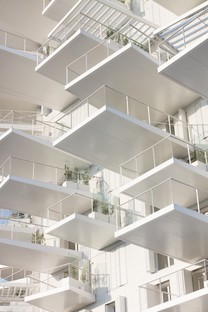 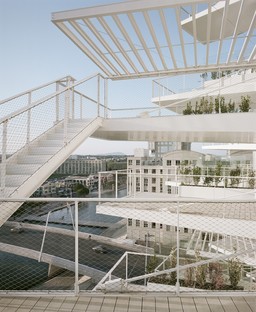 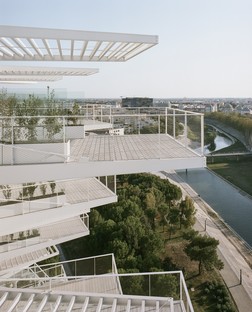 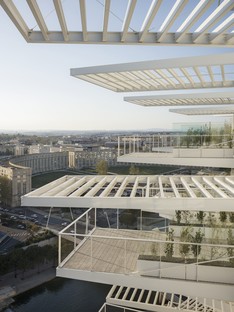 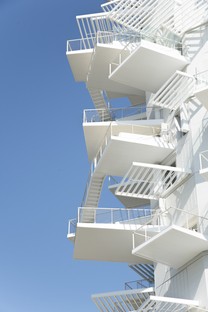 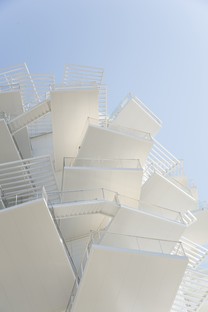 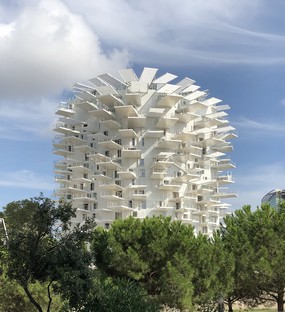 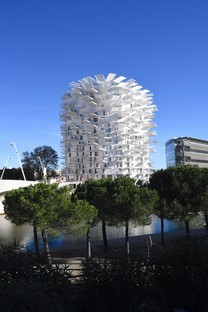 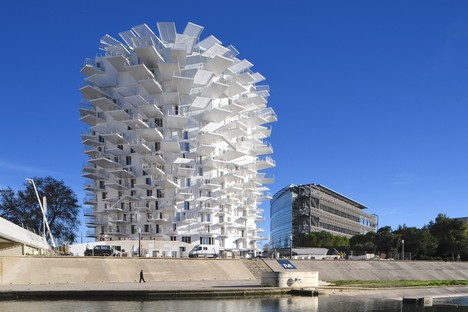 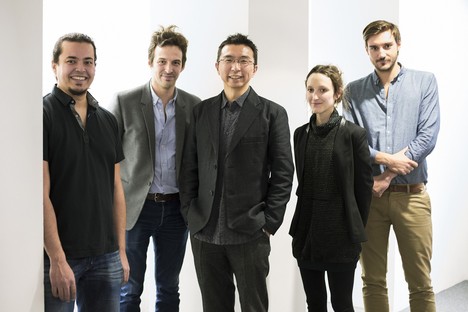 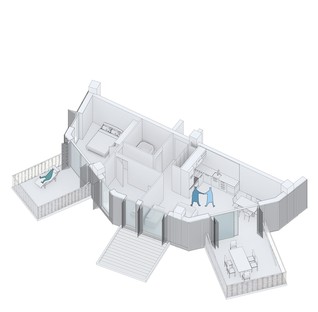 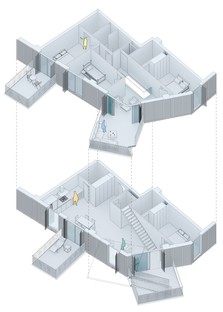 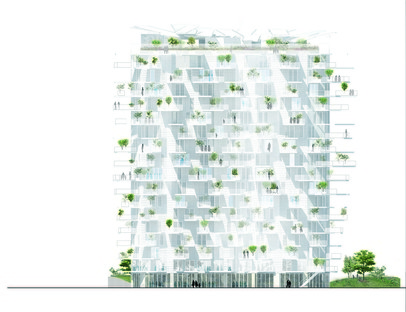 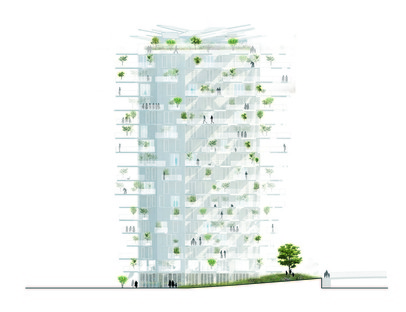 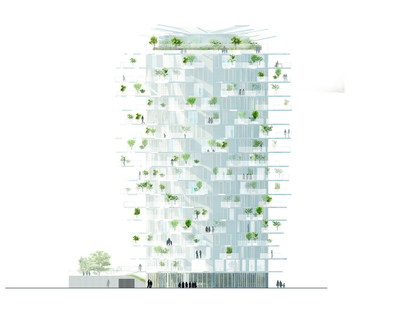 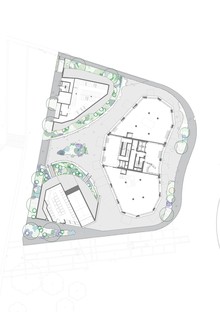 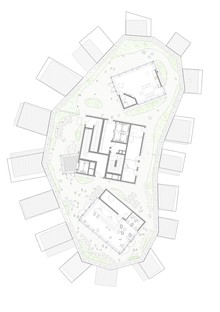 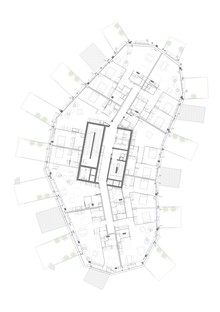 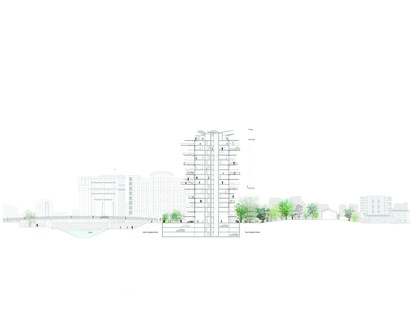