The mansion that used to be the Canadian Ambassador’s home in Oslo has become the central focus of a masterplan for construction of prestigious homes on Bygdøy peninsula, designed by Reiulf Ramstad Architects and constructed on portions of land in the monumental gardens. 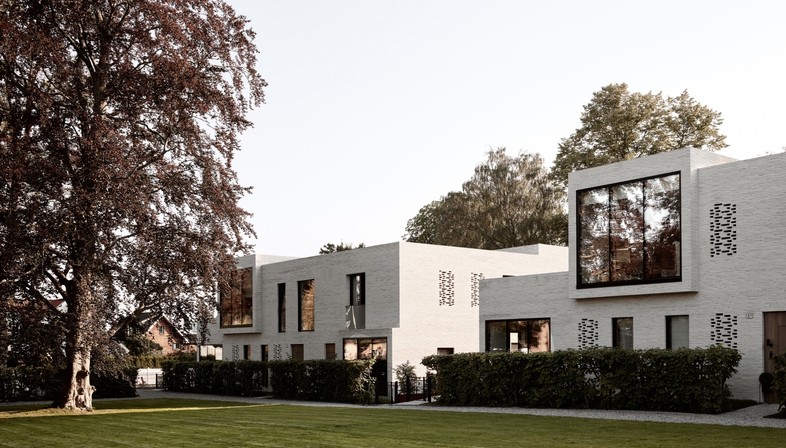 Construction of a complex of six houses designed by Reiulf Ramstad Architects of Norway for the real estate developer Bygdøy Boligutvikling has just been completed at number 15 Bygdøynesveien, a street on Bygdøy peninsula, just outside the centre of Oslo. The focal point of the entire project is a big mansion built in 1916 which served as the residence of the Canadian ambassador from 1956 until 2012, surrounded by a garden that included the lots on which the Bygdøynesveien 15 homes now stand.
Symmetrically built around an axis with the mansion as its centre of perspective, the homes surrounded by tall trees stand on sloping land which rises even further in the direction of the mansion to the north.
There was much debate in the offices of the City of Oslo regarding the fate of this property of considerable historic value until 2012, when the entire 16-acre lot, including the mansion itself, was put up for sale and purchased by investor Tore Eiklid. The big English-style garden was broken up into lots and the two side parts were then sold to Bygdøy Boligutvikling for development as a housing complex, while Tore Eiklid kept the neo-Baroque mansion, the avenues and the part of the garden in front of the building, and is said to have made it his home.
While a park of this size is a rarity, then entire Bygdøy peninsula is dotted with homes surrounded by large gardens and green spaces. The presence of numerous stately homes and a number of museums about the sea and sailing give the place its genius loci, which Reiulf Ramstad Architects’ project protects and enhances.
In compositional terms, the development consists of six homes on two levels, aligned to the east and west of the central garden leading to the mansion, like an ideal continuation of the monumental staircase. Hollowed out to let plenty of light into every room and create flat spaces for use as terraces, the buildings are designed on the basis of the criteria of orientation, divided into the Park Houses to the east, between Bygdøynesveien street and the villa’s garden, and the Garden Houses to the west, between the park and the gardens of the adjacent properties.
The former are accessible from Bygdøynesveien and overlook the park to the west. The decision to place the main entrance in the centre of each volume lends order and rhythm to the façades, even though they are all different. The ground-floor living areas receive the most daylight in the sunniest part of the day, while the bedrooms on the upper level face north to keep them cool. The Garden Houses, on the other hand, face the garden of the villa to the east and may be accessed directly from a pathway running beside them. The layout is organised to follow the path of the sun, so that the living area is always exposed to daylight on three sides, with a view of the park and the evening sun in the southwest.
The scale of these new homes is not only the same as the other homes in Bygdøy, but establishes a clear hierarchy with the mansion, which remains the visual key to the composition with its central garden. After all, the residences imitate its idea of a compact volume open onto its surroundings, as they are made of brick with big vertical windows on all sides. The choice of brick as the cladding material emphasises ties with local history.
The entire complex is characterised by great sobriety, with a limited colour palette shared by the brick, mortar and oak doors. The window and door frames are lacquered black, as are technical components such as gates and outdoor lights. 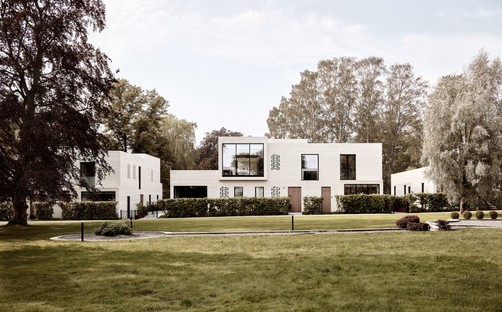 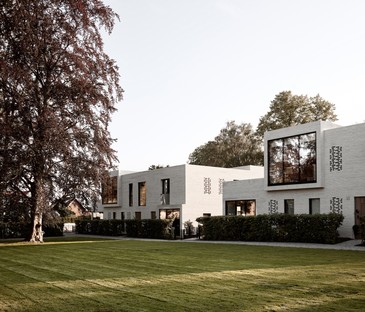 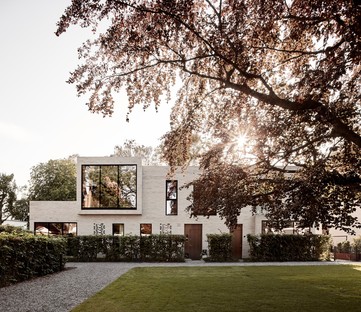 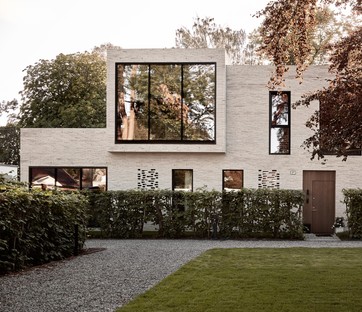 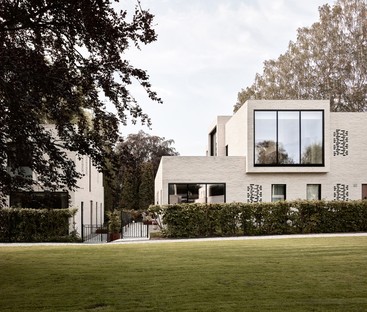 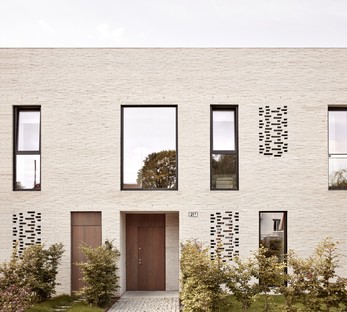 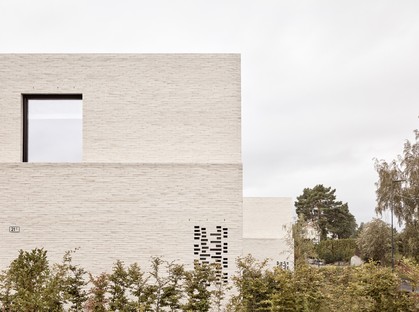 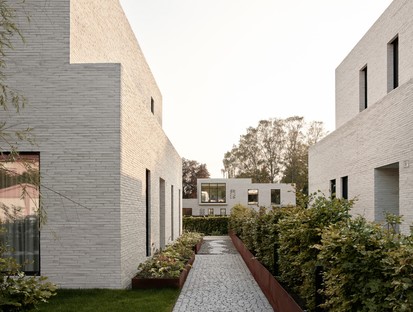 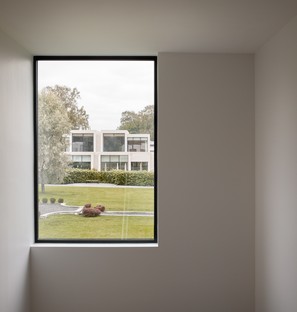 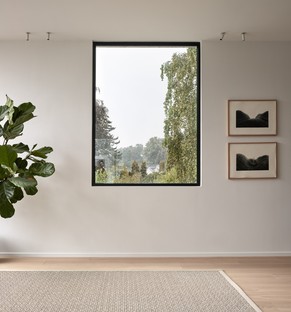 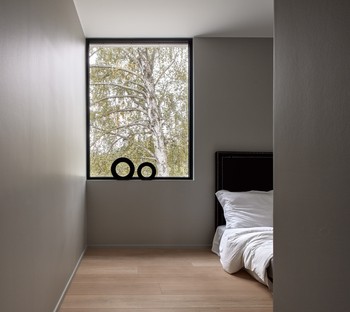 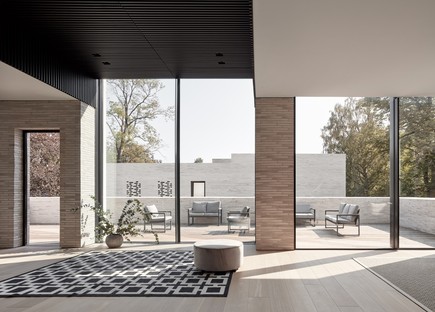 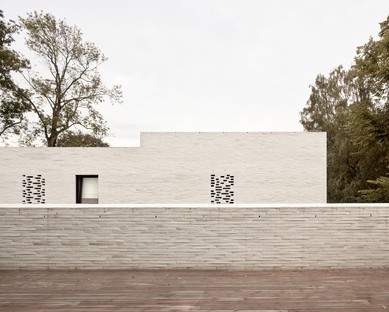 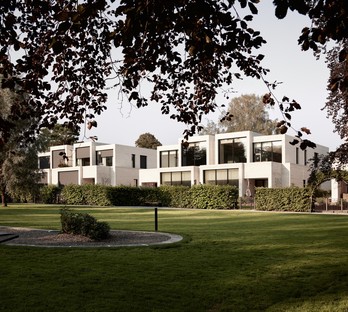 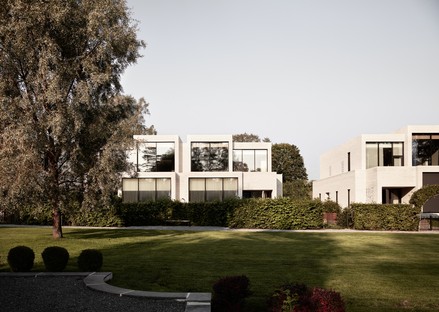 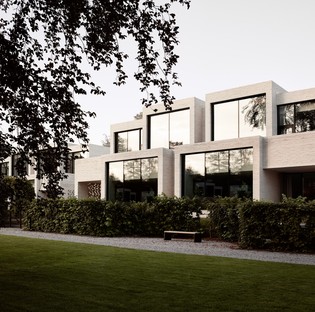 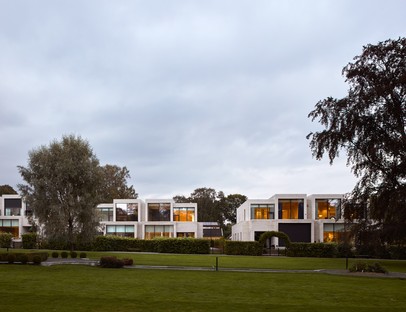 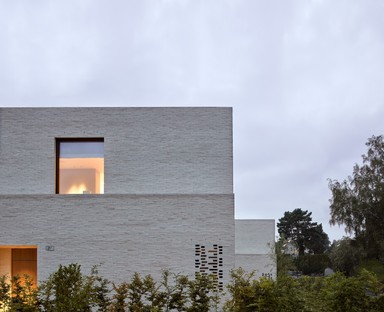 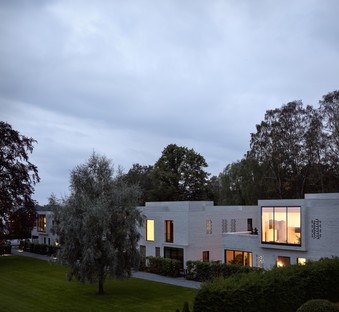 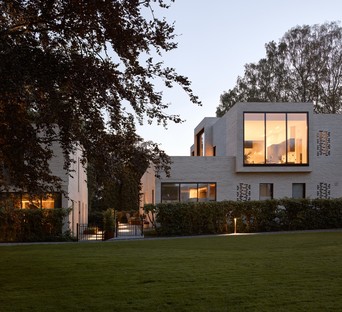 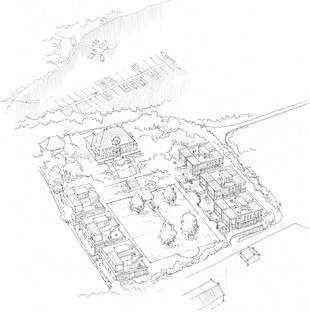 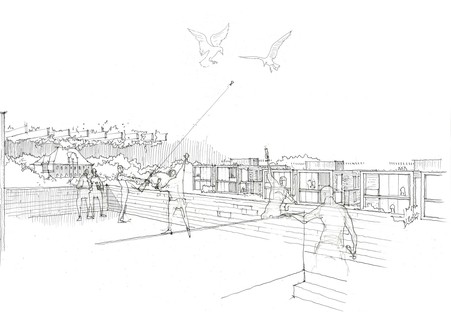 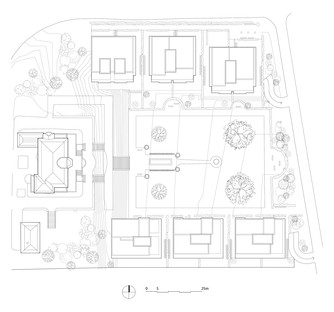