Rafiq Azam builds a family tomb in Noakhali, in southern Bangladesh. The architect views the tomb as a gateway between earth and heaven, reflected in the shape of the concrete cornice framing a stand of betel palms, the vertical lines of which contrast with the horizontal line of the roof. The project includes a single bench on which to sit in prayer before the grassy meadow where the dead are buried. 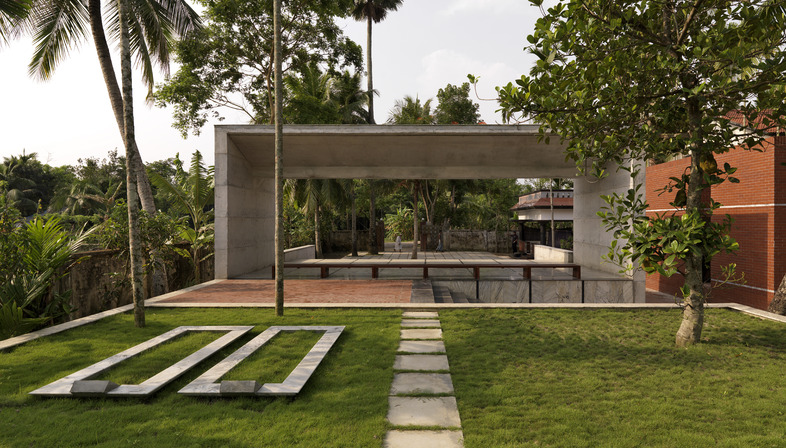 Reflecting on the concept of life as a transition from the earth to the beyond, Rafiq Azam designs a piece of funereal architecture which completes the forms of the landscape in which it stands. The project includes a simple concrete cornice, a door thrown wide open to the grassy meadow where family members are buried. The brick of the floor and walls is a nod to the local building tradition, which makes abundant use of the material.
In the Bangladeshi countryside it is common to come across little green areas in front of the houses, still used today as tombs for one or more families. In the village of Noakhali, in the south of the country, these burial grounds often have decorated fences signalling the importance of the site.
Rafiq Azam has designed a family tomb in the village in line with this tradition, introducing contemporary elements into a traditional construction. In historic tombs the burial ground is at the entrance to the home, surrounded by a decorative fence: its preeminent position is a sign of reverence and respect, while its vicinity to the home emphasises the continuity between life and death. Azam built a tomb for his client?s parents next to the family home, metaphorically imagining a second home for them, in parallel with the first. He does away with the protective fencing but raises the cemetery above the level of the home with a prominent marble step as a sign of respect and devotion. Reinterpreting his country?s monuments, Azam draws a perspective which guides the eye from the gate at the entrance to the home via a stairway leading to the imposing cornice and to the burial ground, focusing on the stand of betel palms (a palm tree originally from India and Malaysia).


The cornice is a symbol of life as a passageway: rooted in the soil and projected towards the heavens. But it is also a shelter, a protective place in which to seek calm and collection: by simply placing a wooden bench under the cornice, an element often appearing in his residential constructions, the architect indicates that this is a place of meditation, a place to leave behind the frantic pace of earthly life and contemplate its transitory nature. All around it, the elements of Bangladesh: a pool which fills with water in the monsoon season, the green vegetation and rice paddies, one of the most important sources of nourishment for the local farmers, and a mosque, because Islam is the country?s first religion. The building fits into the landscape without disturbing its rhythm and appearance, bringing man back to the soil after the brief parenthesis that is life. 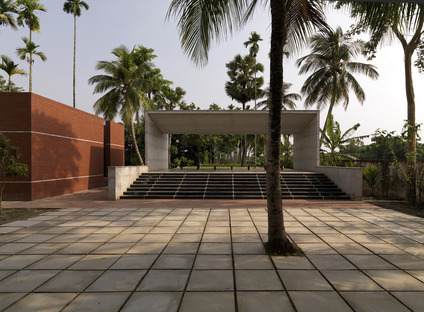 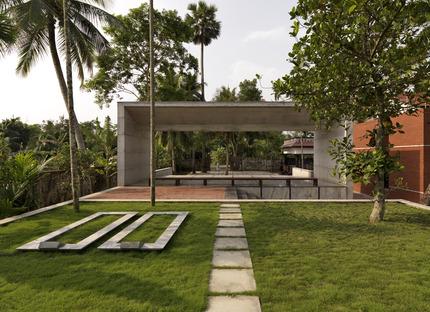 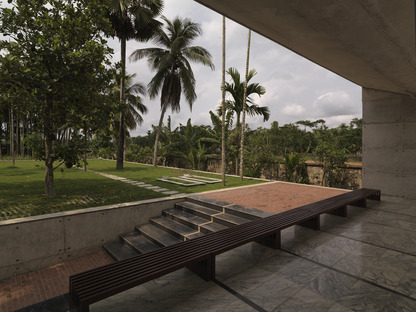 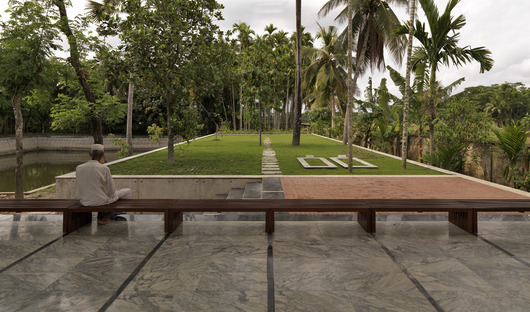 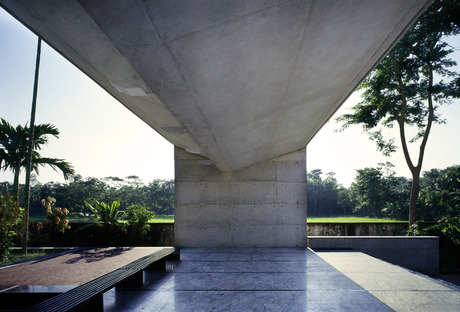 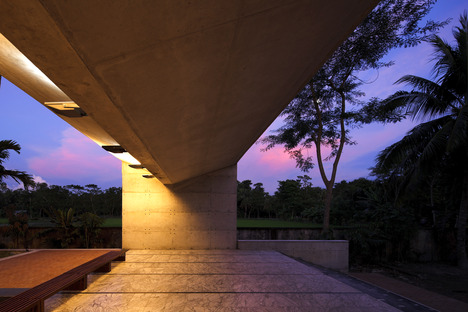 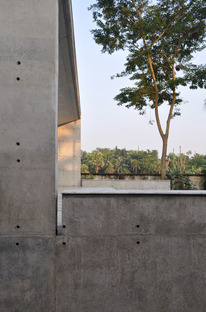 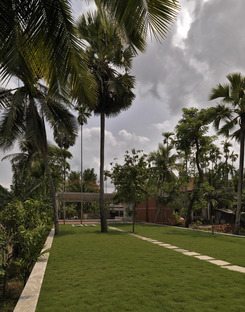 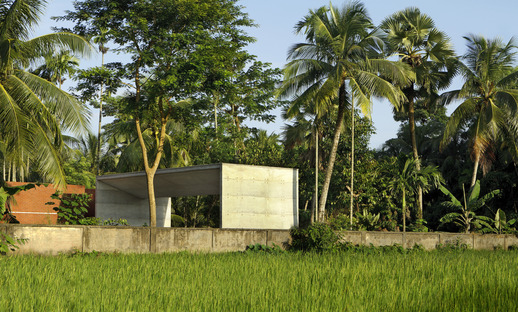 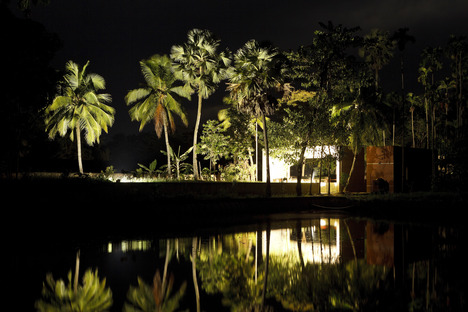 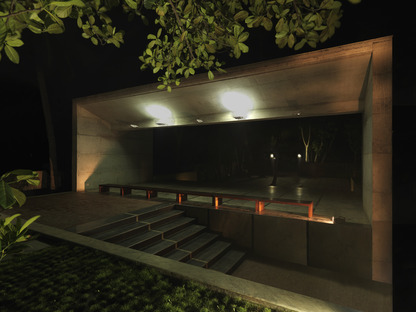 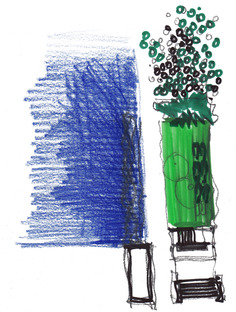 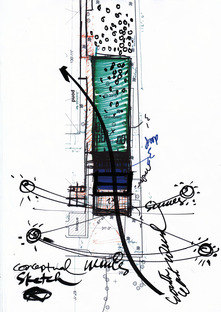 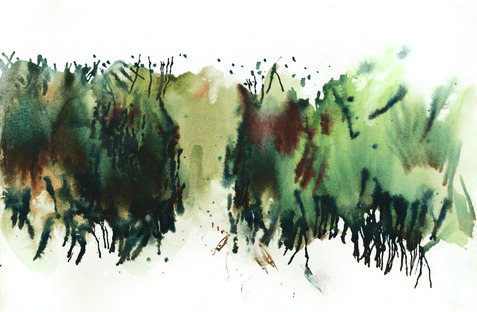 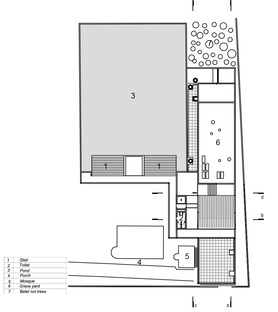 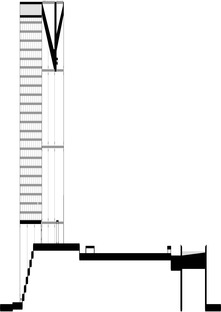 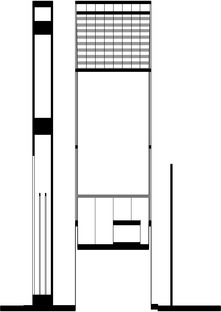 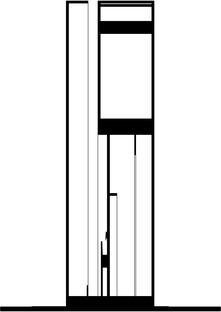 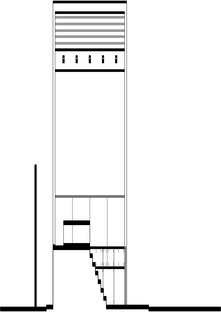