Until 2 September, at MoMA PS1, visitors can enjoy an immersive experience in the jungle through a cyclorama structure. The project was designed by architects Ana Paula Ruiz Galindo and Mecky Reuss from the Pedro & Juana architectural firm, the winners of the Young Architects Program, the annual programme for young architects promoted by MoMA and MoMA PS1 in New York. 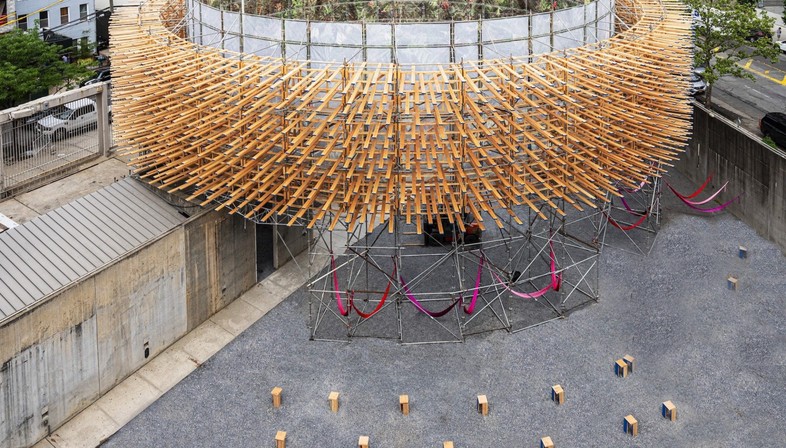 Several temporary installations have been set up this summer, where museums or institutions can temporarily host summer events as well as social awareness initiatives. Let’s take a look at some of the most significant and interesting projects. 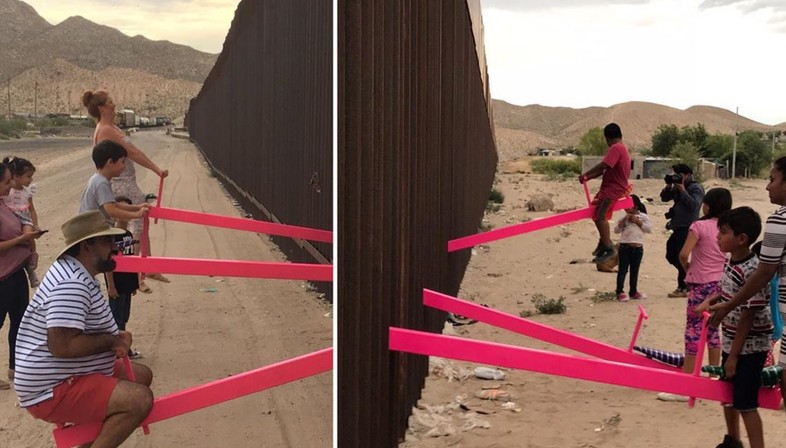 Teetertotter Wall is certainly the most famous one, also for its profound meaning and for what it denounces. The title of this project, created by the architect and activist Ronald Rael in cooperation with the architect Virginia San Fratello and several local associations, has not enjoyed the same popularity and fame as the work itself. The images of these pink seesaws installed on the border wall between the U.S. and Mexico have gone viral and have been shared and used by social networks and newspapers. In a seemingly simple way, the architect Ronald Rael has turned a symbol of hatred and tension into a liberating game, helping to raise global awareness of the situation on the US-Mexico border. 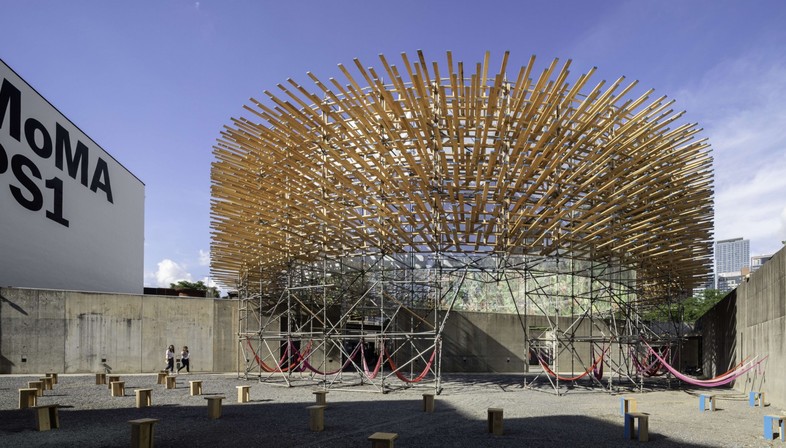 Another temporary installation, also linked to the U.S.-Mexico relationship, is the protagonist of the summer of 2019. The annual event of YAP, the programme for young architects promoted by MoMA and MoMA PS1, which began in 2000 and has now reached its 20th edition, has also been held in New York. The winner of the 2019 edition is the Hórama Rama project by the architects Ana Paula Ruiz Galindo and Mecky Reuss from the Mexican architectural firm Pedro & Juana.
As the title suggests, Hórama Rama is a huge cyclorama, which is 12 metres high and more than 25 metres wide. The project is inspired by a type of entertainment that was popular in the 18th and 19th centuries, which later became actual public shows. A precursor to movie theatres, a cyclorama consisted of a circular room or structure with walls covered with a panorama, with a 360-degree view. The aim was to give the viewer the illusion of being immersed in a landscape, with light coming only from the ceiling and with three-dimensional effects created using special lights or moving elements. Similarly, the project by the Pedro & Juana firm, selected among the five YAP finalists, offers spectators an immersive experience in a wild jungle setting. The presence of this large circular structure redefines the outer courtyard of MoMA PS1. Visitors can walk in and out of this large facility where 210 printed vinyl panels reproduce brightly coloured tropical plants and birds.
Pink hammocks made in southern Mexico, raw wood benches and a 27-metre-high waterfall complete the installation and enhance the visitors’ experience.  Outside, with its protruding wooden elements, the structure makes the courtyard more dynamic, but at the same time it looks like a crown of thorns, as if it were defending nature from the surrounding urban jungle of Long Island City.

In fact, as Peter Eleey, the curator of MoMA PS1, pointed out, the project by the Pedro & Juana firm “by bringing together two landscapes in transition, the jungle and Long Island City’s skyline, draws attention to the changing conditions of the environment, both globally and locally, at a critical time.” 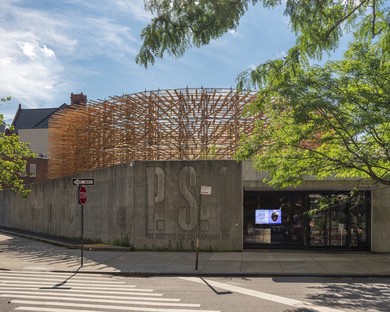 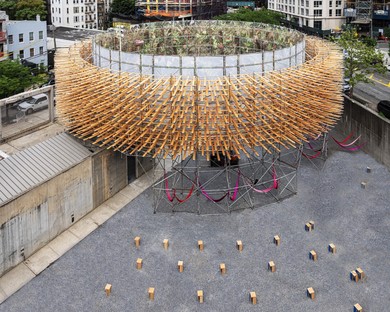 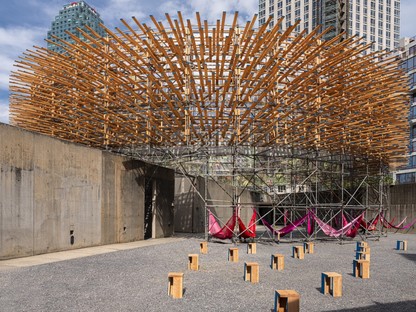 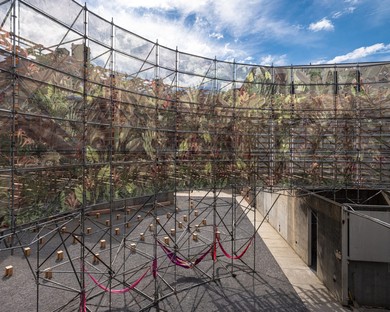 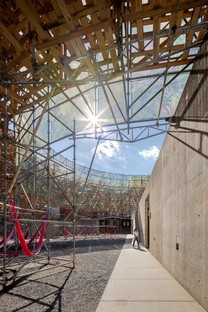 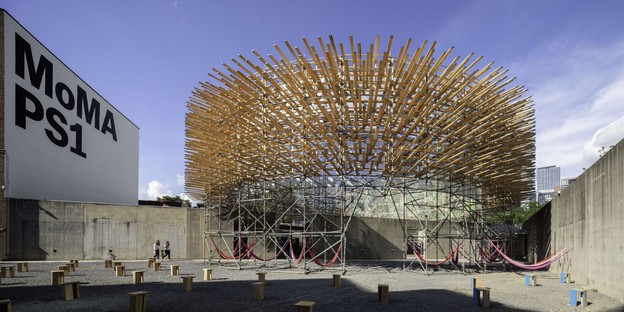 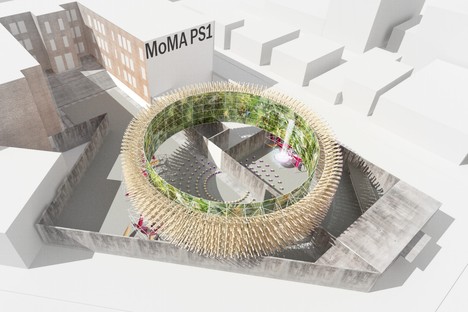 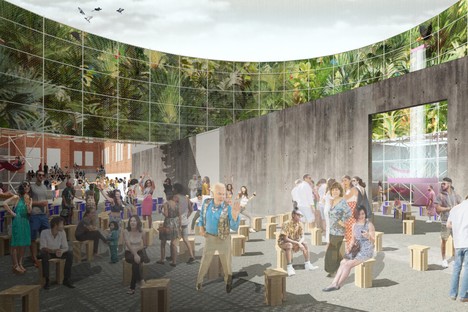 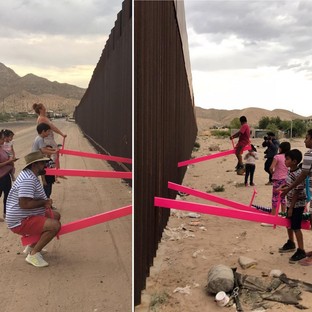