Studhorse holiday home designed by Seattle studio Olson Kundig is located in Methow Valley, in Washington state. Olson Kundig’s Studhorse is a hymn to landscape, considered not just as a view but as a part of the rituals of everyday living. 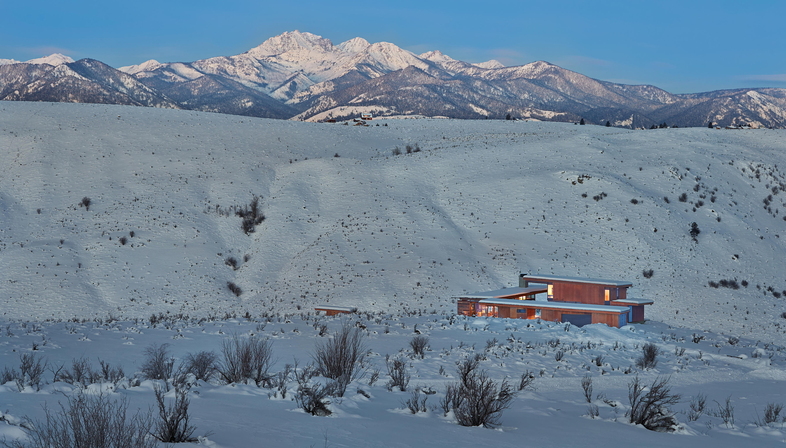 In his design for Studhorse, a holiday home in Methow Valley, in the northern part of the state of Washington, Olson Kundig experiments with the definition of the rural shelter, turning it inside-out. Studhorse, named because of its location near Studhorse Ridge, is a place where the architecture is clearly designed to be surrounded by the landscape and disappear into it, rather than shelter its inhabitants by limiting their access to the outdoors.
First of all, Studhorse is not a compact volume, a single mass or unit designed to contain warmth and maintain a comfortable indoor temperature and provide shelter against a climate that can be harsh. The building is broken up into four volumes arranged in a circle, forming a central courtyard that joins them all together in a dialogue of perspectives, and users must pass through the courtyard to get from one room to another. The courtyard itself is a like fifth room, with no roof or side walls, because the buildings forming the home around it do not enclose its perimeter, as they do not touch one another. The volumes appear to have been placed where they are to create a backdrop for a theatrical performance, set side by side to guide us in a special view of the world, toward Studhorse Ridge, toward Pearrygin Lake, or toward the mountains that attract visitors to the area every year.

Olson Kundig’s deconstruction of the building’s floor plan forces people to pass through the courtyard, and therefore to go outside, so that it is the opposite of a shelter. And yet the project is inspired precisely by observation of the particular climate of the Methow Valley, a continental climate characterised by winters with heavy snowfalls and scorching summers, in Tom Kundig’s own words. This family holiday home was never intended to provide shelter from the elements, observing the changing seasons through the windows from the comfort of the interior , but to force the family take part in this continually changing rhythm of time, experiencing it every day, in everything they do. This is why the floor plan is broken up, with the living room and other common areas in the western building, the bedrooms isolated in the two blocks to the north and east and the sauna closer to the pool on the southern side than to the other volumes: you have to go outside to get inside, as the architects say.

The building’s floor plan is based on a philosophy of discontinuity, and the structure confirms it. The reclaimed wood covering the steel frame of the home seems to retreat to make way for large windows, or sliding doors in the case of the block containing the living room, kitchen and bar, extending out over the valley as if it wished to disappear from view. The heart of the home and centre of every route, it even opens the bar onto the outside, with a folding panel system that makes the volume much like a temporary structure and encourage people to spend more time outside than inside.
The TV wall in the living room in the northern room even has a prodigious mechanism opening up onto the courtyard, making it like another room. 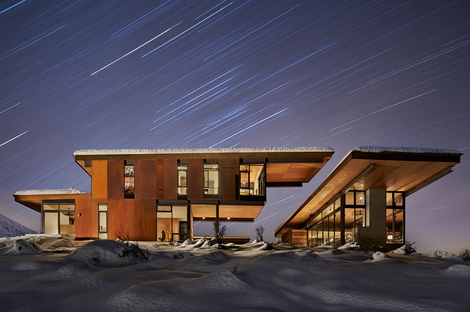 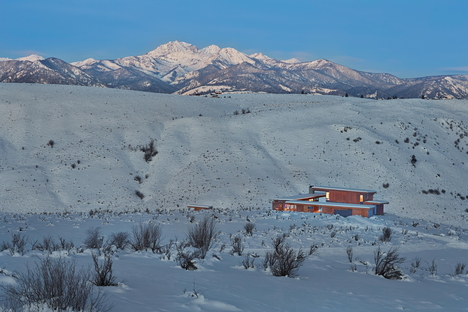 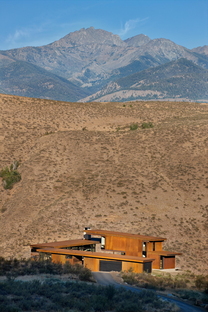 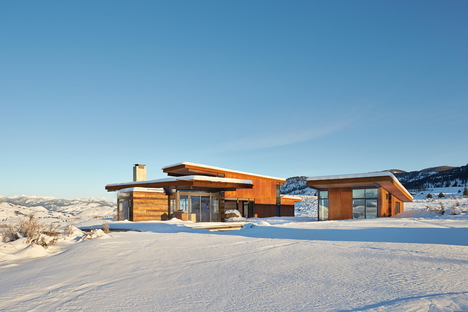 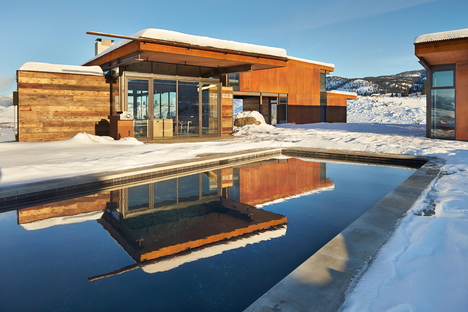 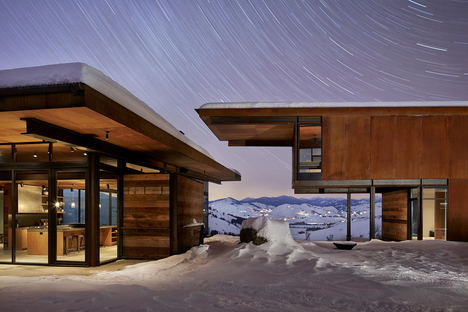 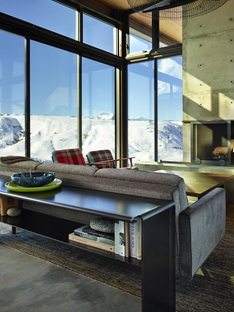