Ground floor house is one of the results of the study conducted by OITOO in collaboration with the students of SUPSI, the University of Applied Sciences and Arts of Southern Switzerland, of projects for reuse of the ground floor of buildings in the suburbs of Porto. 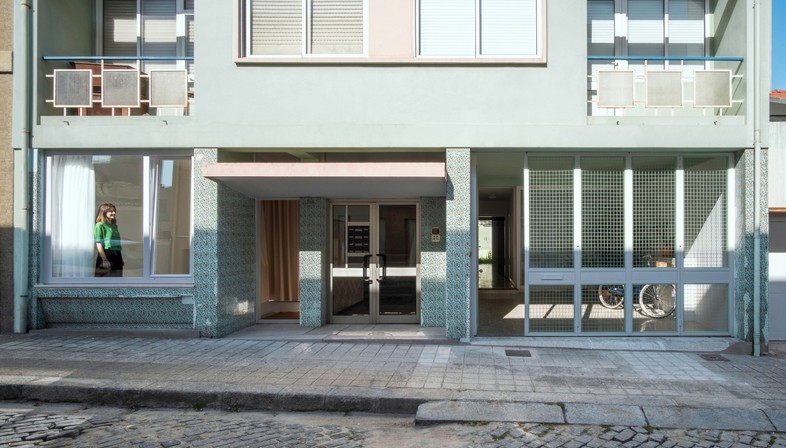 With Ground floor house, OITOO, a small architectural studio founded in Porto in 2017, offers an opportunity to analyse a phenomenon that has been affecting the city in recent years: the presence of large numbers of underused spaces in its outlying suburbs.
The “observatory” concerned with specific research projects conducted under the study found that, in the increasingly thorough transformation of the physical city, there is an alternation between use and disuse of buildings or portions thereof, between occupation and abandonment leading to decay, in a slow, complex process that is sometimes difficult to perceive due to our lack of perspective.
The architects of Oitoo involved students from SUPSI, the University of Applied Sciences and Arts of Southern Switzerland, in a project looking at a neighbourhood in Porto, analysing potential for ground floor living. According to their study, ground floor spaces are being abandoned more frequently than others, not only in Porto but in European cities in general. Unlike historic city centres, such as Porto’s Baixa district, where big international brands and souvenir shops ensure that all street-level spaces are occupied and used for commercial purposes, the city’s outlying districts look like a series of closed shops which have empty windows or are bolted shut with “for sale” signs on them.
The architects of OITOO point out that the preference in recent decades for a lifestyle based on use of private vehicles, making a weekly trip to a big shopping centre in order to reconcile working hours with family life, has slowly led to the emptying-out of street-level spaces designed and previously used to provide neighbourhood services.
OITOO’s reflection proposes rediscovery of these properties for residential use, making the most of their ability to connect the street with pedestrian routes and interiors. The students worked in a specific part of Porto, identifying the lost values associated with ground-floor living, such as large rooms, high ceilings, an open floor plan, the presence of a courtyard which is often underused or simply used as storage space, and direct access to the outdoors.
The ground floor of a building on three levels in Rua Álvaro de Castelões, a former warehouse and garage which had been abandoned for years, became the site of a project commissioned to illustrate the possibility of reusing and redeveloping such a space for residential use.
The space had a linear floor plan with a succession of windowless spaces and one opening at each end, filled in in various ways. One of the principal criticalities was in fact the need to light up such a deep volume in a way compatible with residential use; the architects opened up the walls facing the street and the courtyard, which had been closed with roller shutters or masonry, leaving only small windows high up on the wall. By transforming the courtyard into a garden and replacing the infill with big panes of glass, one in each room, the architects brought the landscape outside into the scene. 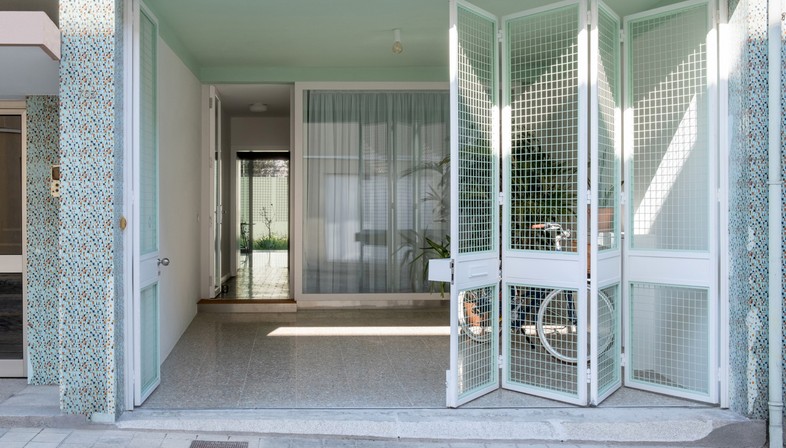 They then added an area that would act as a filter between the sidewalk and the centre of the home. The original function as a garage has been maintained on the eastern side, where, beside the entrance, is an open space in which to grow potted plants or park small vehicles, even a car if necessary. The presence of a gate with a grating ensures that the interior is visible and that light and air get through, completely changing the look of the façade. Recovery of the polychrome decoration that identified the entire front strip of the ground floor has restored its unique face, making it different from the other levels in the building. Its colours, sea green, light blue, wood yellow and orange, reappear on the ceilings inside, framing the openings, and in various items of furniture.
By eliminating additional infill added over the years, the symmetry of the floor plan and the original features of the structure, such as the lintels in view and the circular column of concrete forming the fulcrum of the veranda were restored. Along the eastern and western walls are four bedrooms, each with their own windows, while the windowless central zone contains the bathrooms. The ground floor’s vocation as a utility level is preserved in the building’s memory, but carefully chosen vintage furniture, the addition of greenery and use of cross views to add perspective transform a place of passage into a space for spending time.
The passer-by strolling along Rua Álvaro de Castelões today sees inhabited interiors and meets the gaze of people where there were formerly only closed shutters and empty windows and this improves the perception of security and the quality of life in the neighbourhood. 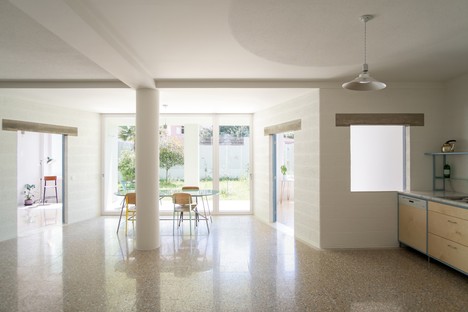 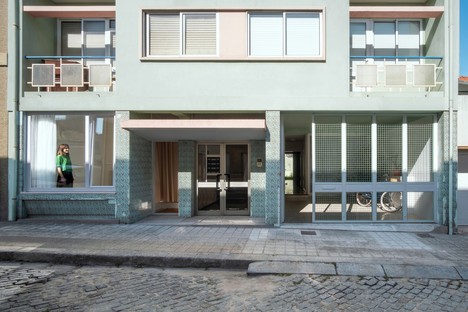 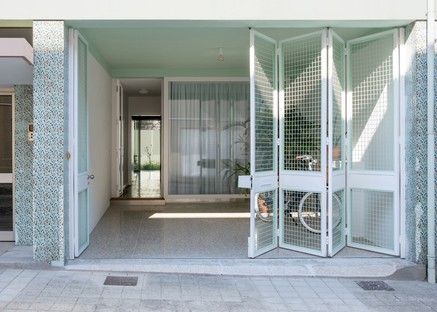 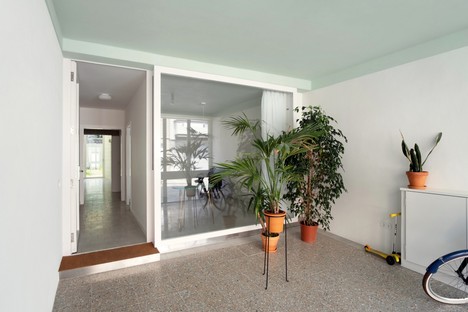 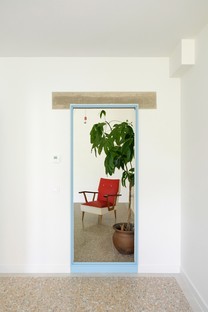 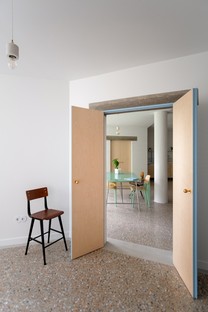 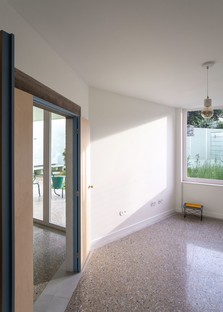 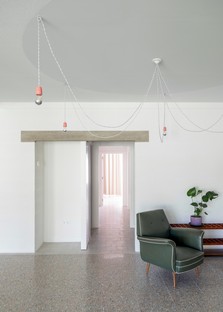 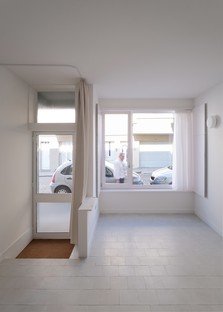 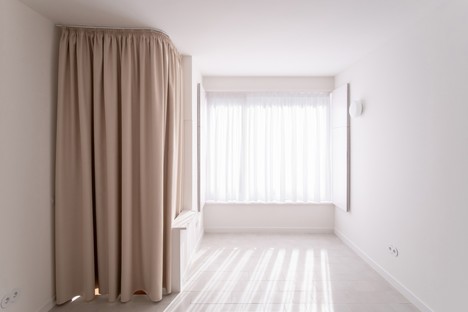 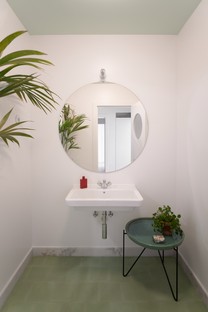 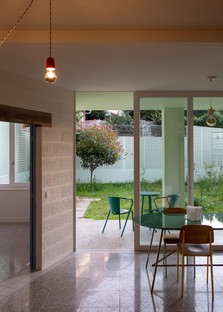 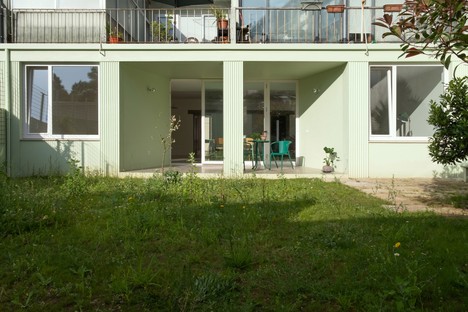 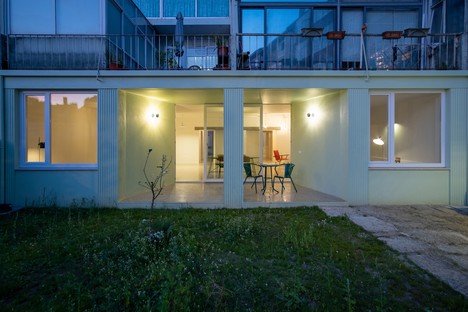 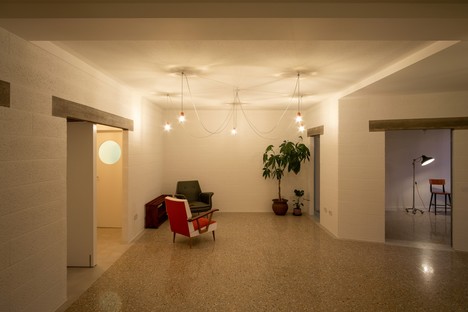 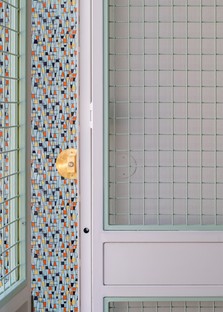 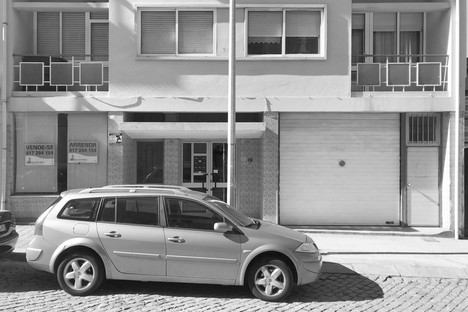 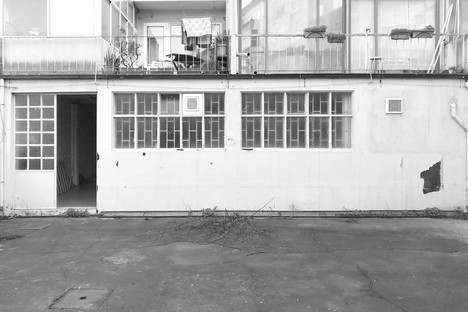 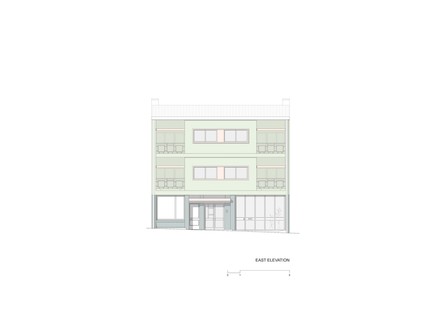 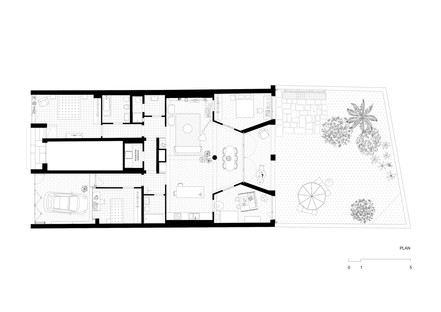 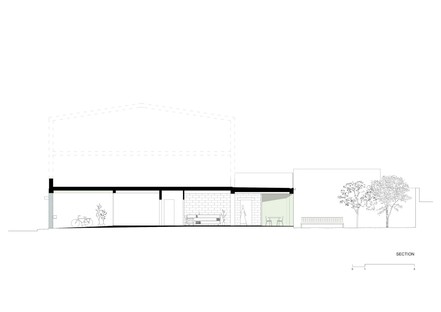 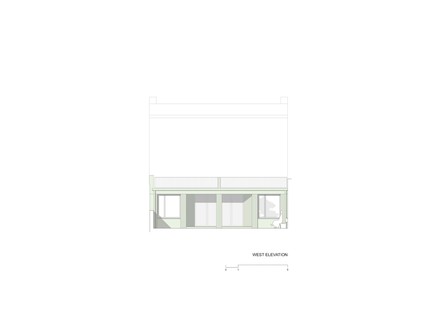 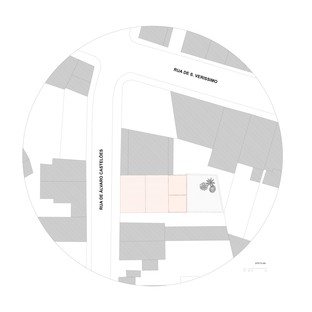