Speaking about the Mausoleum of the Martyrdom of Polish Villages in Michniów, Mirosław Nizio says that seeing the photographs of the houses on fire left him with the visceral feeling that he had been transported back to the time of the Nazi massacre. This was the starting point for his design for a memorial. 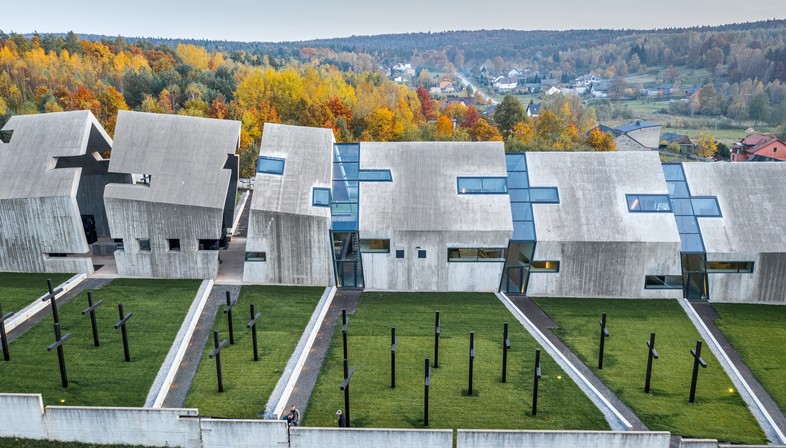 Upon reaching the top of the steps that lead to the mass grave in Michniów, with its memorial stone, visitors are now faced with the Mausoleum of Martyrdom, which commemorates the massacre of the inhabitants of this and other Polish villages during World War II. The project was headed up by Warsaw-based firm Nizio Design International, which won a competition held in 2009, and has resulted in the construction of a symbolic place located on the very spot where the geographical place was erased by Nazi violence.
On 12 and 13 July 1943, the German army attacked the village of Michniów on an expedition with the sole purpose of punishing its residents for their collaboration with the Polish resistance movement. The whole residential area was set ablaze and more than 200 people - the entire population of Michniów - were murdered. What is now bitterly remembered as the pacification of Michniów became a lasting symbol of the Nazi crimes committed in the Polish countryside.
After many years, Michniów was rebuilt along provincial road 751, which runs through the village from north to south, with paths leading out to the houses like a tree brimming with tiny parallel branches, all oriented towards the main road without any discernible town centre. The new Mausoleum aspires to become the heart of the community, but at the same time, has been built in line with the aforementioned road axis. Almost as if it was intended to blend in with one of the many pitched-roof houses that characterise this village - today as in its original iteration - the monument showcases the archetypal façade of the gabled house, which exudes a reassuring sense of peace and invites visitors to wander through the garden at its sides.
This is not, however, a picturesque garden, but rather a field crossed by oblique concrete paths - resembling countless cuts or scars - highlighted by the gentle uphill slope of the ground. The ground is planted not with flowers, but with dozens of black wooden crosses, providing an undeniable echo of the mass grave located just behind the observer.
The mausoleum is a 160m-long tunnel-like structure, the initial section of which is a covered, enclosed space with just a handful of glazed slits in the roof to allow some daylight to enter. This has been dubbed the House of Tranquillity - the very start of the experience, where the visitor is not yet sure quite what to expect as they find themselves in a cold yet neutral environment. Nizio Design International, which took the lead on not only the architectural design, but also the outfitting of the interiors, has inserted a chapel and a linear succession of rooms, each of which tells the story of a stage in the history of the repression suffered by the Polish people during the war. When viewed from outside, the structure appears to be segmented into eleven sections, but from inside, the gaps between them are not significantly noticeable, nor do they allow for the outside world to penetrate it: the idea is that the visitor’s concentration should not be distracted from the words and images featured in the witness accounts. 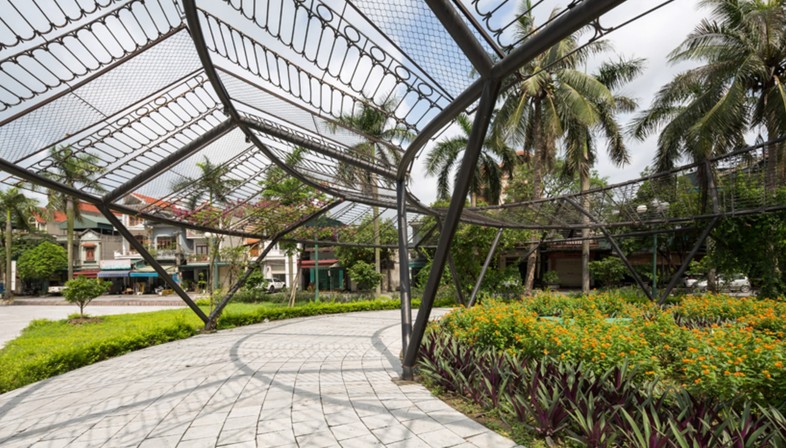 The solid structure, made from exposed concrete, was poured in situ, with its surfaces marked by the texture of the wooden formwork as a result of the special type of plaster used to treat it. Visually speaking, the exhibition is overwhelmingly black, with grey, geometric furnishings and a lingering smell of burnt wood in the air due to the materials used to construct them - an olfactory reminder of what hung in the air at the time of the tragedy, when the Nazis set fire to all the houses in Michniów. This section of the exhibition plunges visitors into a surreal and distressing atmosphere which foreshadows the second part of their journey. The compact concrete block suddenly fragments, opening up as its parts spread out, distorting more and more with every passing metre, until the roof finally disappears and it is no longer recognisable as an enclosed space. This deconstructive effect as reproduced in the architecture, paired with the feelings evoked in those passing through the final part of the tunnel, are intended to resemble the precise moment of an explosion.
With no protection, left to the mercy of the changing seasons and dramatic weather conditions - sun, wind and rain - the concrete surface and steel components of the structure degrade faster, starkly highlighting the signs of an ‘open wound’ both physical and metaphorical.
The visitor is transported all the way back to those days in mid-July of 1943, right into the midst of a tragedy which nobody managed to escape and which haunts the place to this very day, experienced as they walk through the mausoleum.
This powerful piece of architecture has successfully established itself as a memorial; a space for living, present remembrance; a truly essential destination for those seeking to understand the historical events that marked the twentieth century. 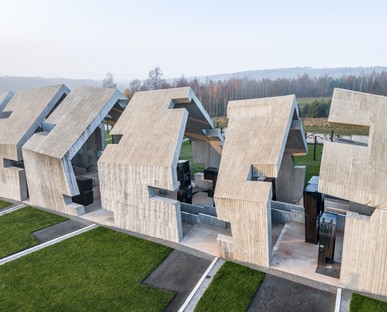 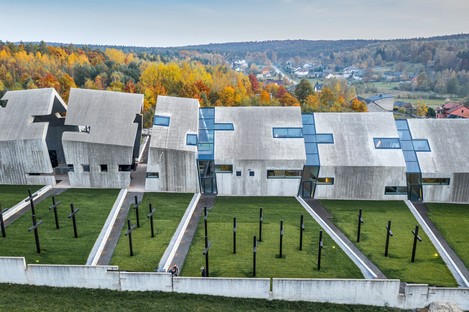 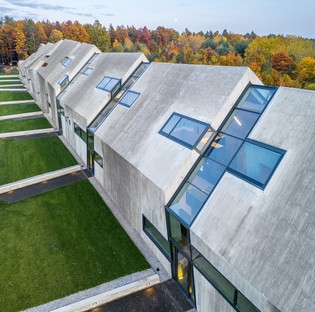 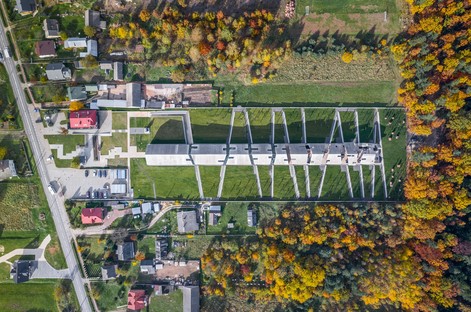 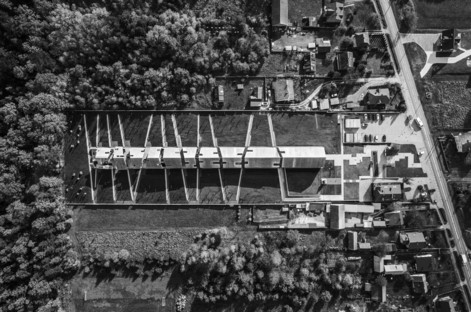 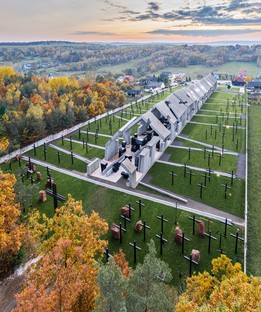 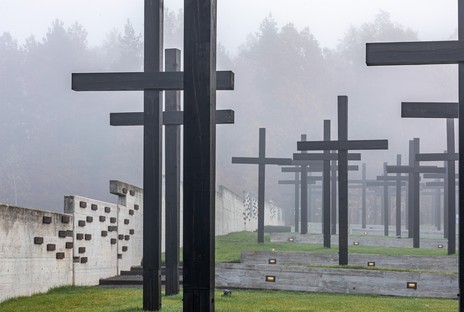 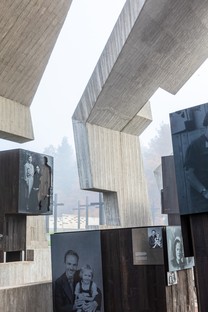 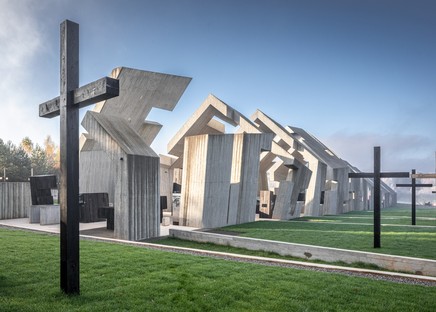 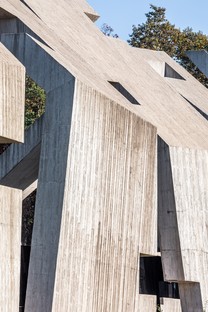 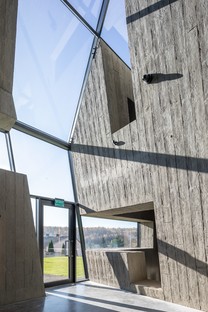 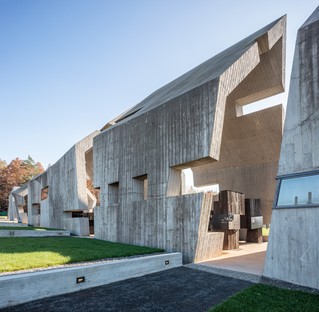 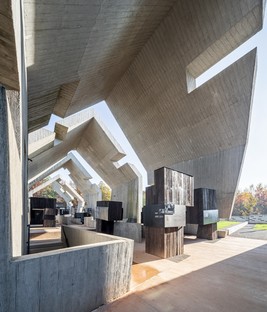 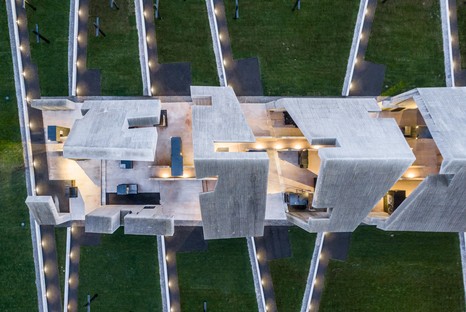 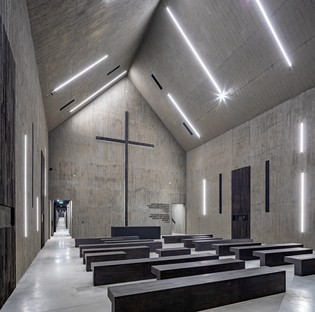 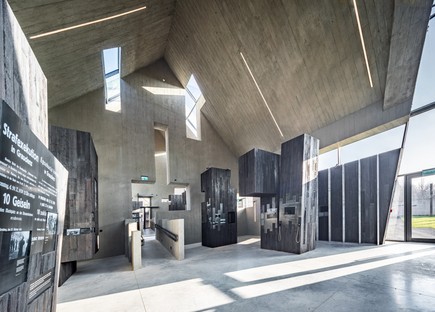 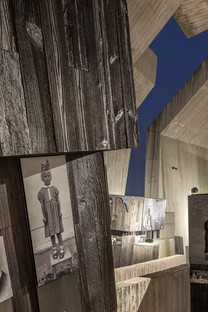 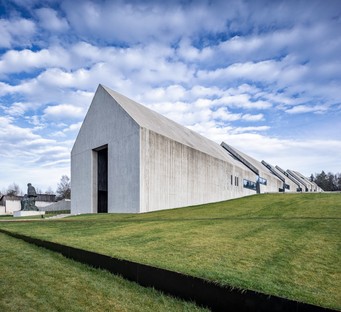 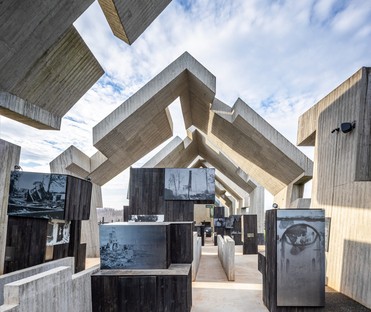 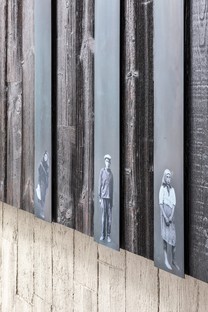 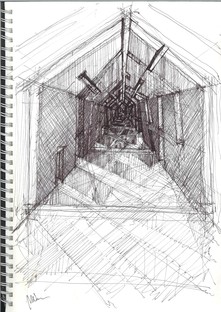