Architecture firm Mikhail Riches designed a highly energy-efficient social housing development project in the centre of Norwich in the UK. A complex of terraced houses that offer a valid alternative to high-density apartment buildings. The project won the Riba Stirling Prize 2019. “An exemplary project”: this is how the jury of the RIBA Stirling Prize defined the social housing project for Goldsmith Street, designed by architects Mikhail Riches and Cathy Hawley. The project, which has already won numerous awards, received a double recognition on October 8, 2019: it was named the winner of the recently established Neave Brown Award for Housing and of the prestigious RIBA Stirling Prize 2019.
In his photo essay, Tim Crocker was able to capture the atmosphere that the architects wanted to communicate: a quiet and timeless European residential architecture, even though some details immediately reveal that this is a contemporary project. The materials, for instance: the bricks are clearly contemporary in their colouring, with the desired light efflorescence, the black roof tiles, which were bevelled where the roof joins the wall covering, the brise soleil in pre-punched metal, as well as a number of key elements selected to ensure energy efficiency.
But what makes Goldsmith Street so unique? Transforming a quiet and typical residential neighbourhood of a provincial English town into a special place?

The story of Goldsmith Street begins about twelve years ago, in 2008, when the Mikhail Riches architecture firm won the design competition announced by the City of Norwich for the construction of approximately 100 affordable homes, distributed more or less equally between independent houses and apartments. The project underwent a long elaboration process. The goals was to build a highly sustainable residential complex, reintroducing roads and “houses” in an area of the city dominated by apartment buildings that characterised the 20th century. The architects designed a very simple masterplan consisting of seven blocks, separated by 14 metre-wide roads and a landscape project that expands beyond the outer limits of the site, to include local roads and a park. The width of the roads, intentionally reduced, imitates a model of urban structure that is typical of the 19th century. The architects were thus able to create a recognisable relation between the traditional English housing and a modern project based on modern conception.
The blocks share a public path accessible from the gardens, small private green spaces at the back of the houses. This secondary “alley” is a panoramic route open only to residents, creating a public buffer zone that separates the private areas between two opposing blocks. This is also a safe place, where children can play. Cars are relegated to the limits of the settlement and parking spaces are organised along the driveways. The reduced width of the driveways determined a 20-miles/hour speed limit and required an accurate design of the façades. Asymmetrical roof inclinations and the low height of the buildings contribute to ensuring adequate sunlight for the streets. The design of the façades required considerable attention during the design phase. The architects were able to lighten the overall outline of the façades thanks to the special texture of the bricks and frames that make the windows look larger.
Nothing was left to chance, with the houses meeting all the high Passivhaus energy efficiency standards, including pre-wiring, in order to be able to benefit from additional services without modifying the buildings. 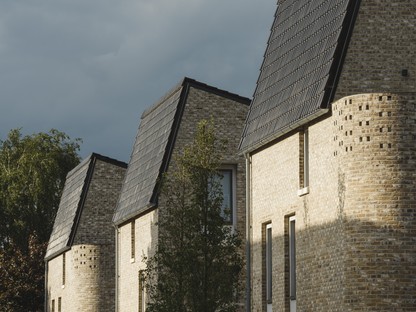 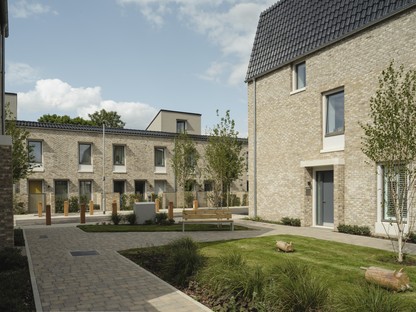 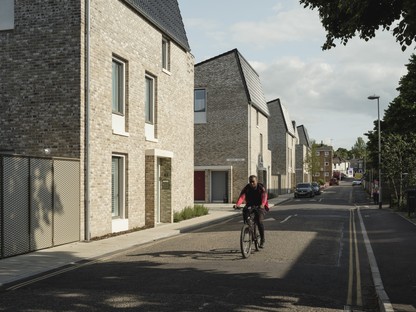 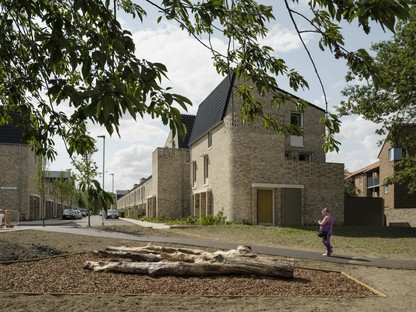 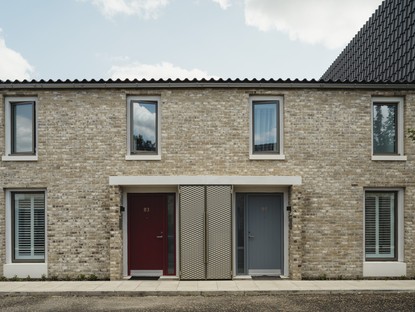 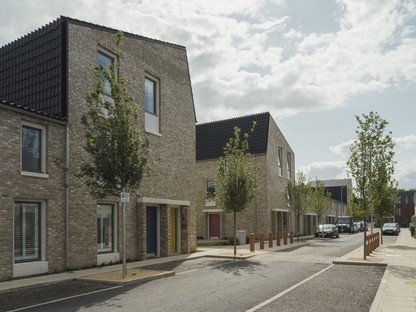 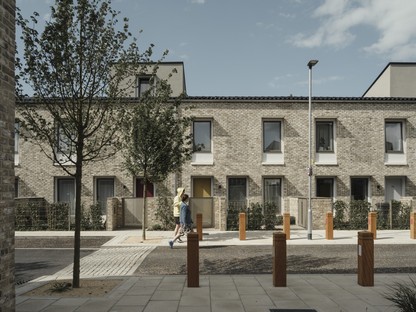 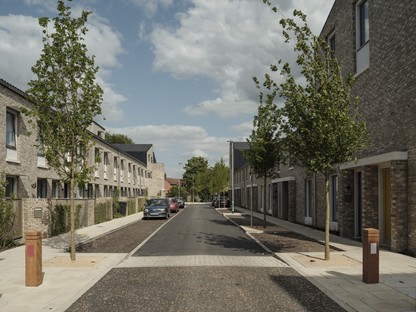 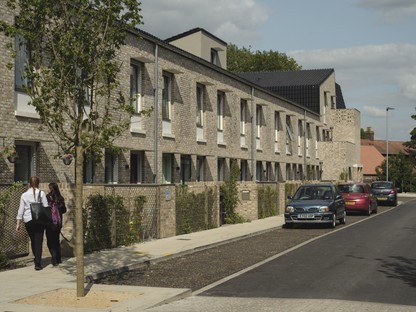 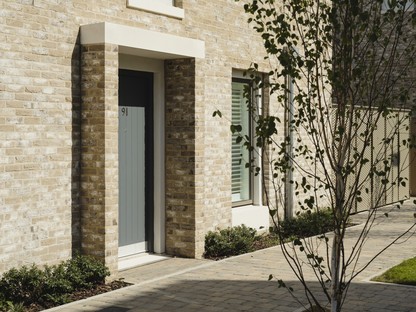 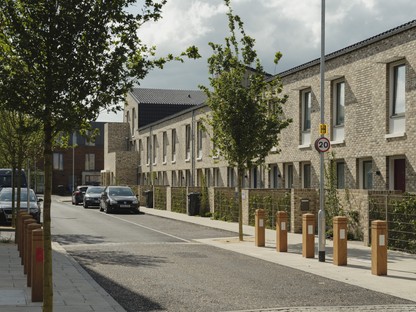 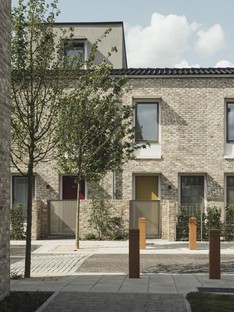 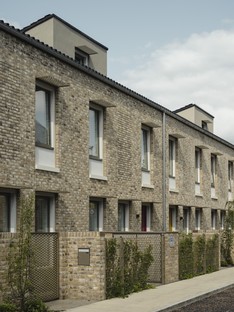 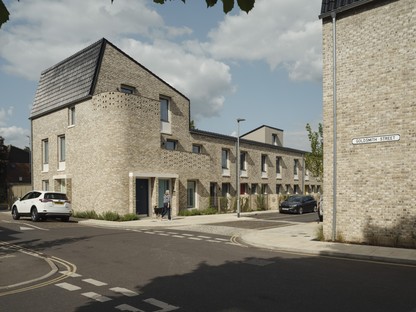 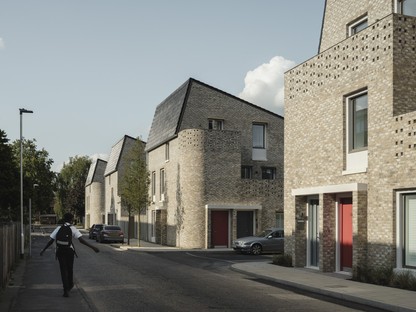 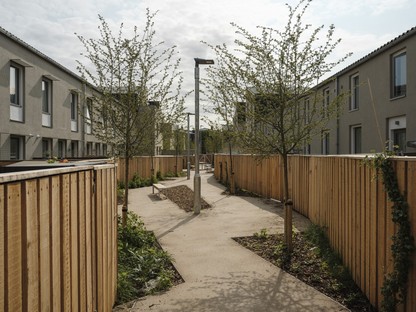 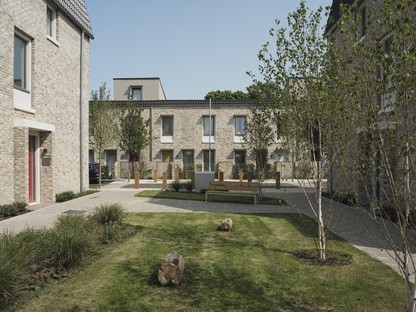 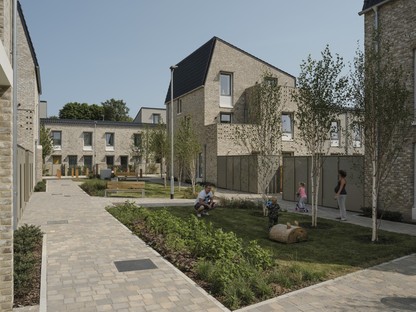 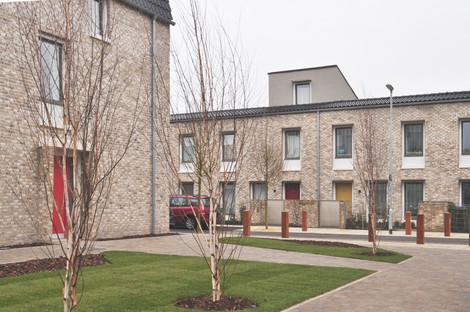 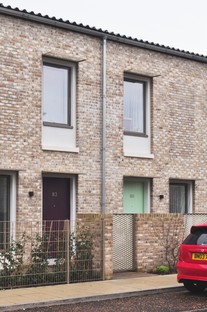 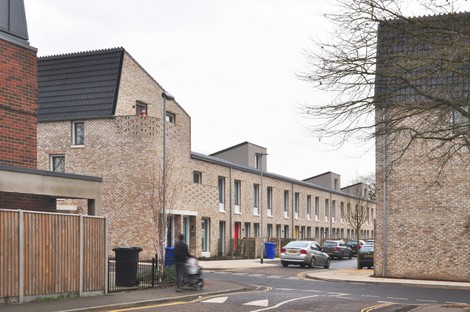