Inspired by yet deliberately removed from the surrounding terraced houses, this home in the Leyton area of London by Louise McMahon is a design that lives and dies by the fine details of its construction, materials and colour palette. An end-of-terrace located at the head of the row, it offers a generous space both for its inhabitants and for the wider neighbourhood. 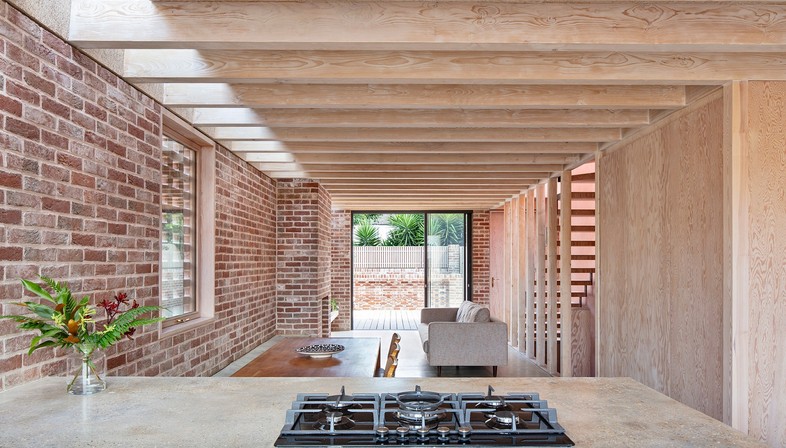 Louise McMahon is the young English architect whose delicate and thoughtful approach to universal issues we recently discovered, such as her newly-built house in an urbanised and typified context.
The limitations presented by a site with a specific orientation and less-than-generous size, strongly tied to an urban setting of no particular prestige, were used by McMahon as the springboard for her design of Leyton House, an architecture with its own, new identity, capable of offering high quality of life for those who reside within its walls.
We are in Leyton, north-east London, in a section of the neighbourhood still characterised by its late-Victorian terraced houses, but also some more recent construction dating back to the post-WWII era in the wake of the Blitz. The site is an end of terrace house, left empty and neglected for many years. Despite this, the plot actually enjoys great potential thanks to its three façades, setting it apart from London’s traditional mid-terrace houses which, sandwiched between their neighbours, merely look out to the front and rear. Louise McMahon’s primary objective was to use the location to her advantage and improve the usability of the available space, thus producing a house in which her clients could live, but also work.
First of all, in order to highlight the true main façade - overlooking the street - the architect designed an elevation that was broken down into parts that effectively conveys an idea of the layout of the internal functions to any passers-by: at the bottom, the wood and brick enclosures announce the presence of two gardens, the central band of brickwork suggests the main body of the house on the ground floor, and finally, wooden panelling at the first floor level denotes a more private area. The site enjoys excellent exposure, with plenty of sunshine in the morning on the street side and, later in the afternoon, on the entrance façade, which faces southwest. For privacy purposes, the elevation that gives onto the street is largely closed off, although a few scattered openings do offer occasional glimpses into the house, both through the brick wall on the ground floor and at the upper level, where a variety of sunshaded openings - with different twists depending on the material - break up the solidity.
The suggestion of deconstruction conveyed by the eastern façade corresponds to the layout of the levels within. On a plot of no more than 130 square metres, McMahon’s desire to maximise the space resulted in her constructing a basement floor and distributing the living functions of the house over three levels, each corresponding to a level of privacy; as such, the underground floor is dedicated to archives, service areas and a projection room (one of the clients is a film director). Stationed at opposite ends - with views and direct access to the two small patios - are an office and a guest room, both of which receive a great deal of light from above. The height of the ceilings is the same as that of the two above-ground floors, serving to change how the space is perceived.
The built-on segment of the ground floor occupies roughly half the plot, with the other half used for gardens: this is where the most public rooms - namely the kitchen and lounge - are located, whilst the open-air space, considered the boundary with the wider neighbourhood, bleeds into the interior space thanks to the vast windows on the two façades that face one another. 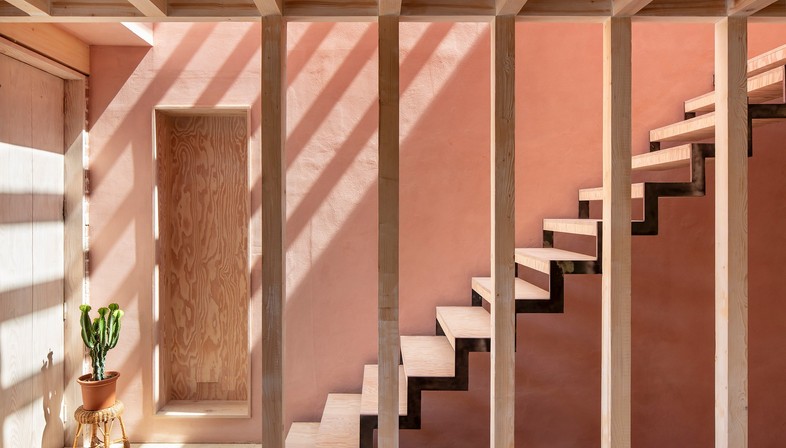 More than any other element, there has always been a dearth of natural light in terraced houses as it cannot, of course, enter from the largest sides of the property. In this case, the architect has illuminated the interiors not only with street-facing openings across the entire façade, as previously mentioned, but also with a skylight running the entire length of the ceiling where the ground floor meets the first, creating intriguing effects as the light plays off the wooden beams. What’s more, the staircase connecting the three levels also offers a system to diffuse the natural light that pours in from the skylight perched atop it. A striking centrepiece - namely a single, continuous bench made of poured concrete - defines and ties together the kitchen, dining room and living area, making for an essential and uncluttered space.
The top level is the most private, home to the master bedroom and a large dressing area. Having opened up the basement level and allocated all the ancillary spaces, there was scope to better organise the two above-ground floors, which have stricter constraints in terms of size; as such, space has been created for rooms that are often sacrificed and relegated, allowing them to enjoy bountiful illumination.
In terms of construction choices, the first two levels are made of concrete and brick, whilst the top floor is a much lighter-feeling wooden volume which creates a sense of dynamism in the whole when seen from the street. The development following horizontal planes is rounded off by a sculptural brick fireplace which creates unity in the composition and provides a charming focal point for the open-plan ground floor.
The maroon brickwork, intended to echo the other houses in the neighbourhood, is finished with a flush cement and white lime mortar layer which reinforces its monolithic effect. The Siberian larch timber structure on the first floor is finished with white oil, creating visual coherence in the colour scheme. Inside, a wall of clay plaster - with subtle variations in hue - connects all three floors; this, paired with the matching cork flooring and woodwork, makes for an understated yet sophisticated sense of domesticity overall. 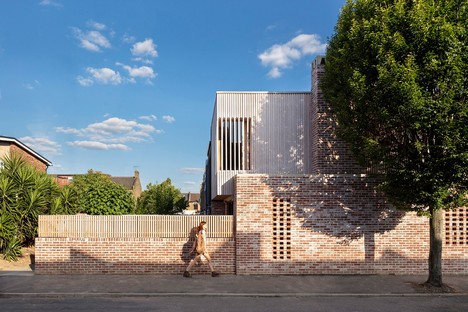 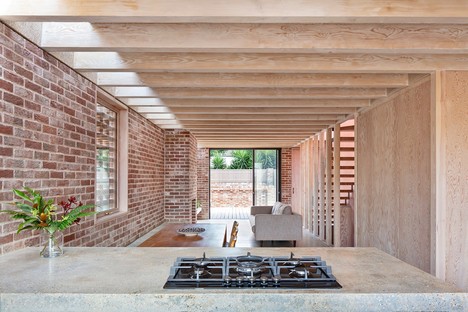 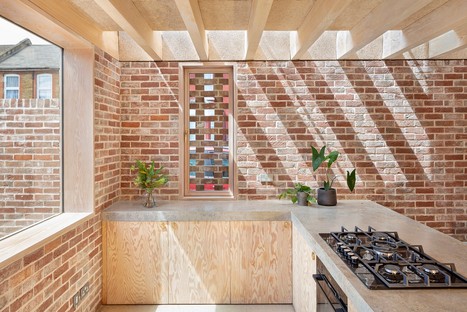 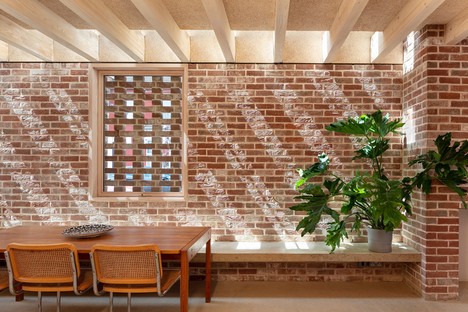 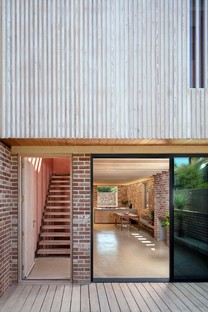 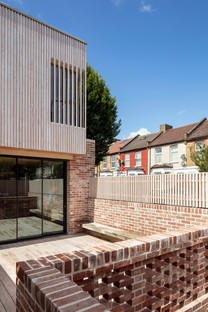 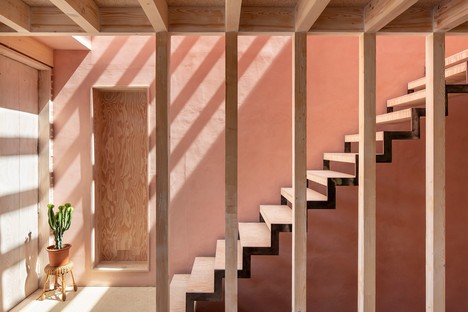 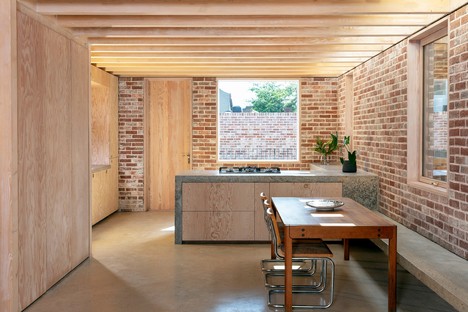 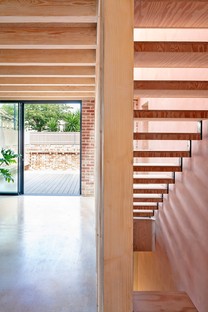 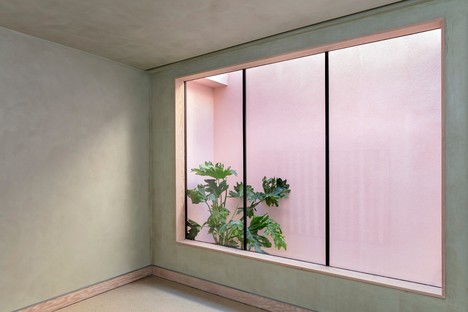 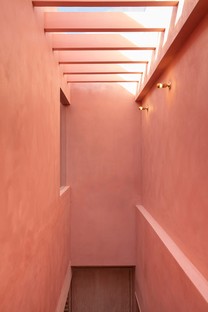 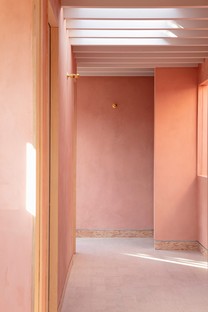 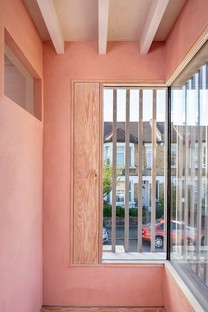 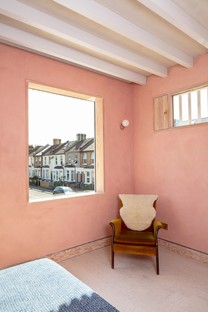 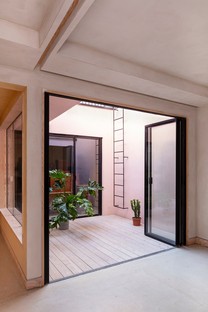 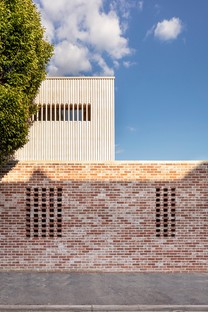 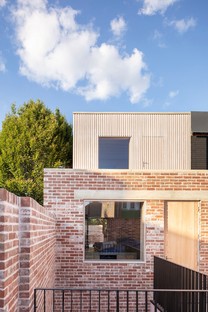 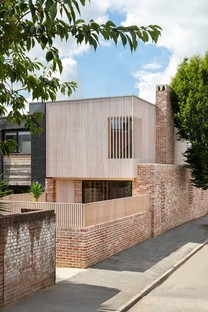 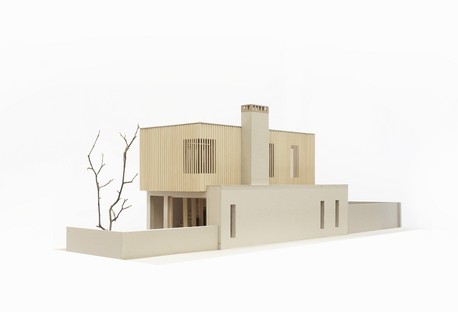 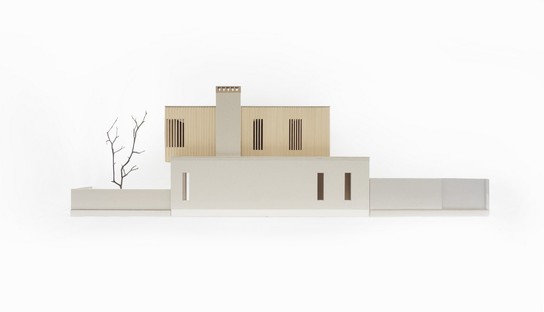 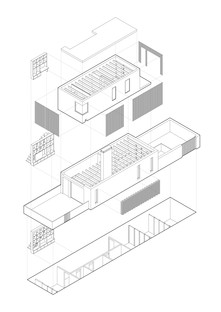 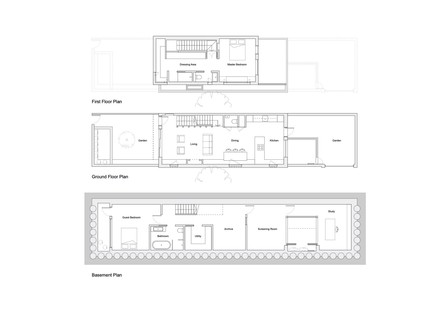 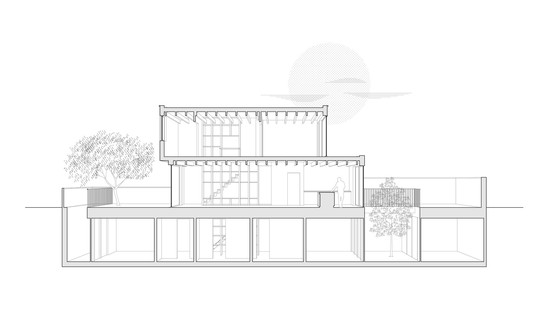 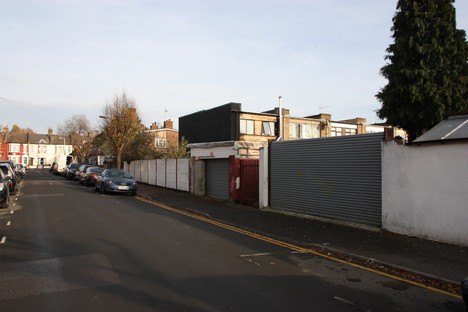 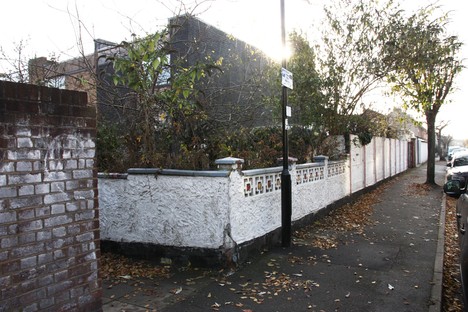